People who know me will tell that I am not a morning person. Not that I stay in bed until noon every day, far from it. Getting up before the crack of dawn is not one of my favourite activities. But when I do get up, I want to make the most of it. That usually starts with a plan on the previous day. 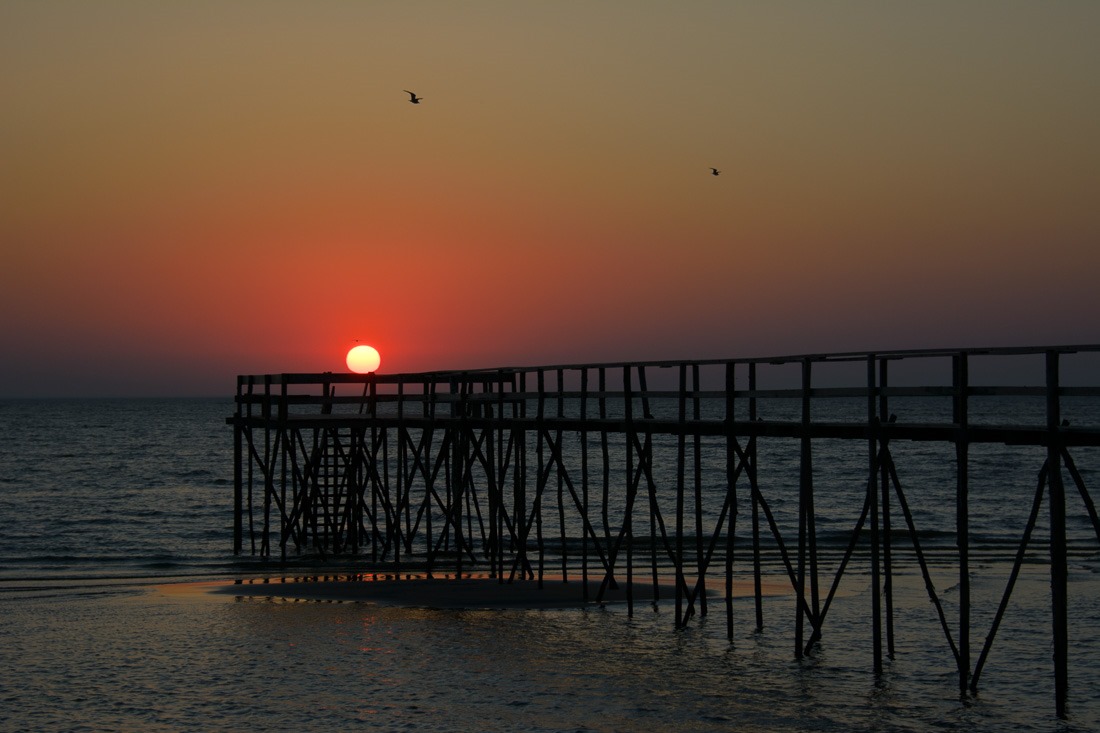 Planning the trip for early morning is the least I can do, wandering about without aim while I could be in the warmth of my bed needs some motivation.

So a plan needs to be forged. Then executed “to perfection”. Well, perfection is hardly achieved, often the roads I plan to go to seem to have been closed by magic for road works, floods or sometimes even for a “private function”, go figure. In other words, my best laid plans are only a shadow of what I sometimes come home with

. As it looks, the plans I make are only a reason for me to get out, not a roadmap of what is to come. 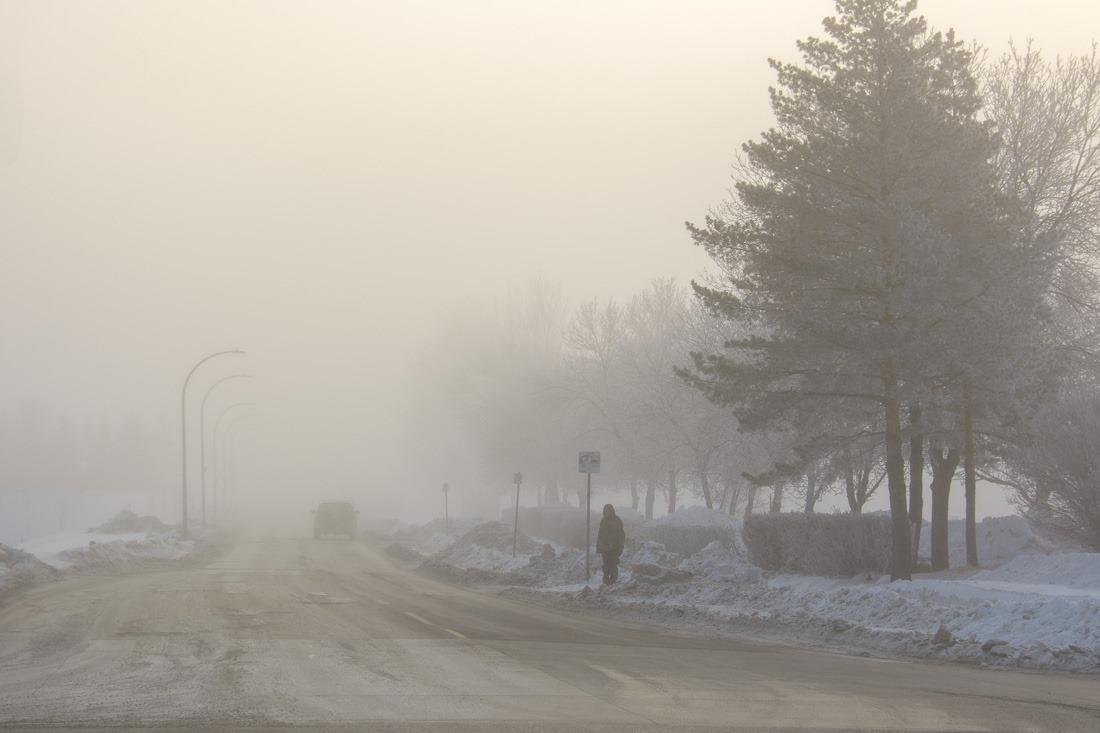 Waiting for the bus

When other photographers also plan on being in the same spot, the motivation only gets bigger, even if the type of pictures I will get becomes more limited. Often I fall in the trap of shooting what others already have seen, hardly questioning their choice of subject. 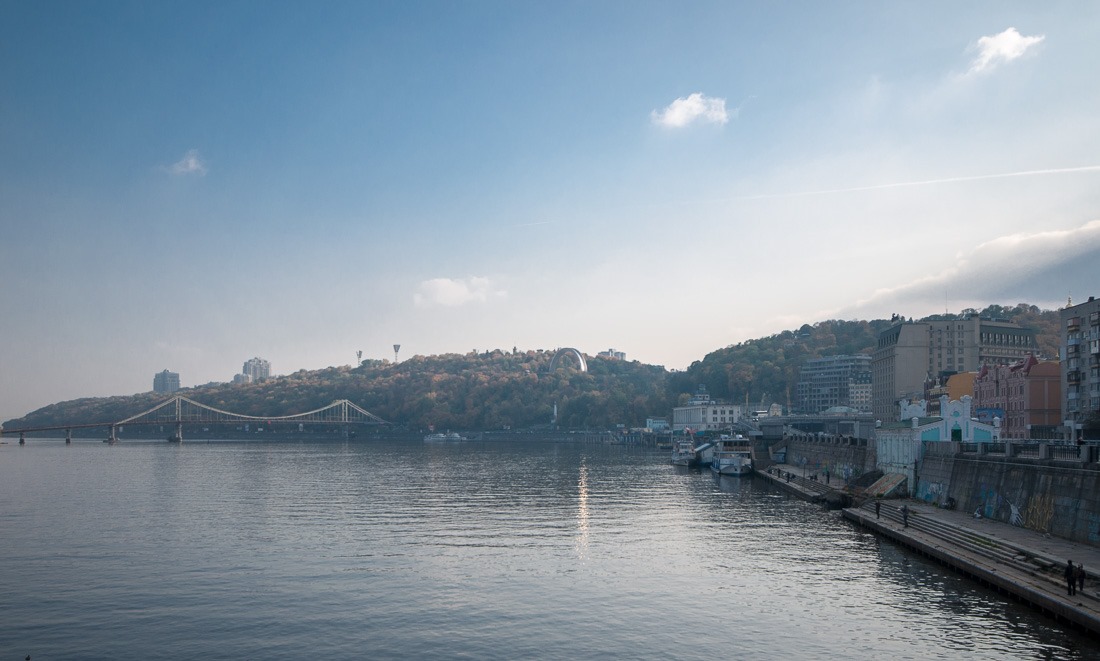 Fishermen and the Arch of Friendship in Kiev, Ukraine

When I wander off alone, I tend to get into the craziest places where a “normal” person never would want to be. Sometimes a bit of risk is required to get a shot. Now, I’m not a big risk taker, so it looks worse than it is. In some countries, people do not like to be photographed, even less so with long lenses. Their aversion to that comes from a long period of spying and mistrust towards photographers. Shooting them from a bit further away is then the only solution. These fishermen on the banks of the Dnipro in Kiev, Ukraine wouldn’t have wanted me to take them in action. Yet I had nothing else in mind than taking a moody morning shot. 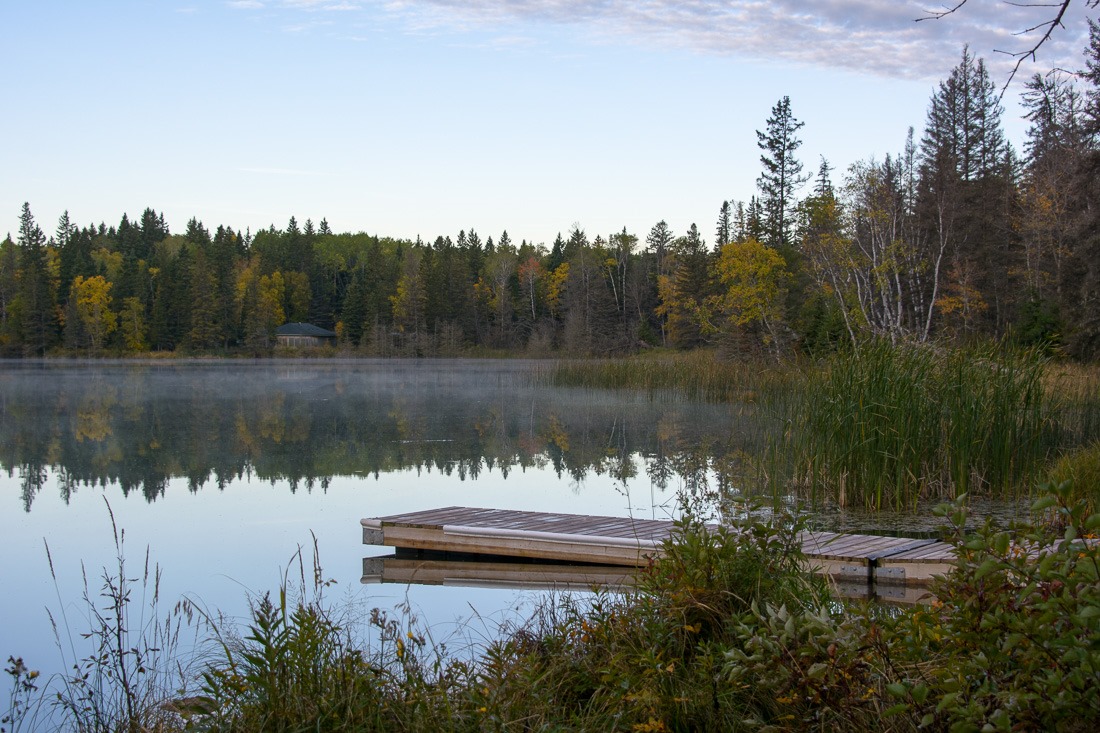 Katherine Lake at 8am

They can’t know that I only get up early to take pictures, nothing else, eh? Other times, we are there with a whole group, often since the evening before. Katherine Lake with the Manitoba Foto Friends was one of those nights. By dawn I could hardly stay awake anymore, but taking shots was still possible. A little mist over the water was a nice bonus. In fact, chasing that bit of mist over the water has become one of my morning objectives since then. 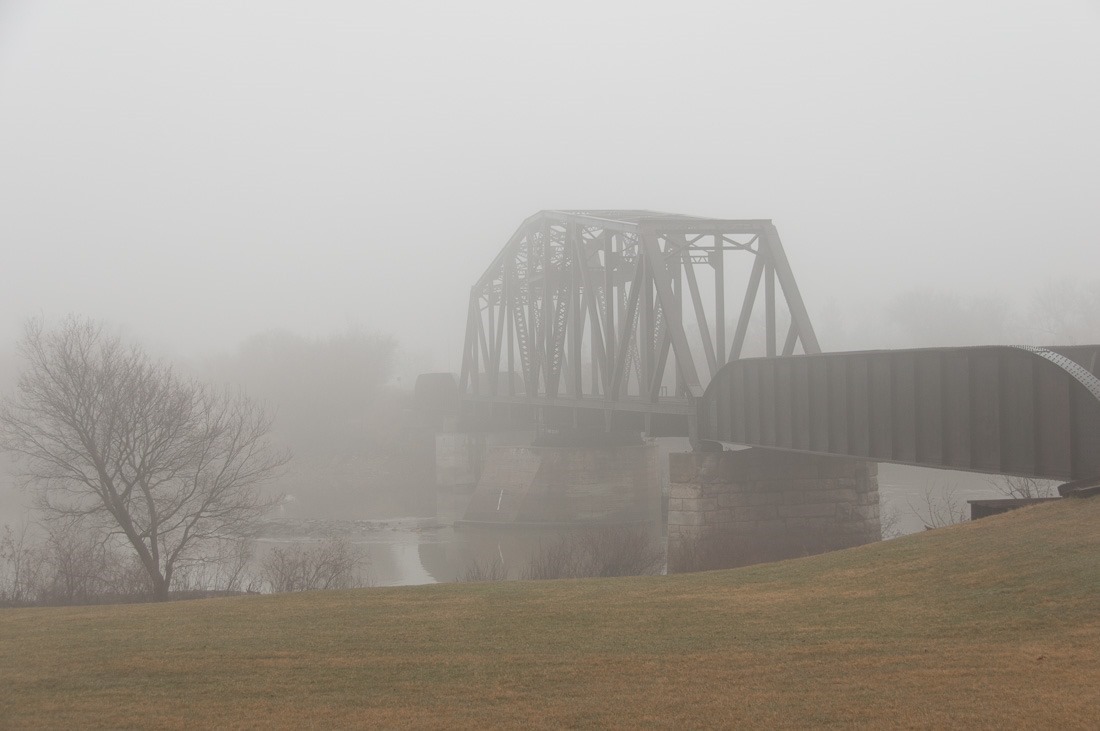 Early mornings often come with an imbalance in temperature between water and air. Air cooling faster than water leaves it to become misty. Without any wind to speak of, mist is there for the taking. But sometimes, the body of water is too big to be without wind. The lead picture in early morning Matlock was such a morning. Accompanied by a great breakfast with some more Foto Friends made for a very nice morning indeed. 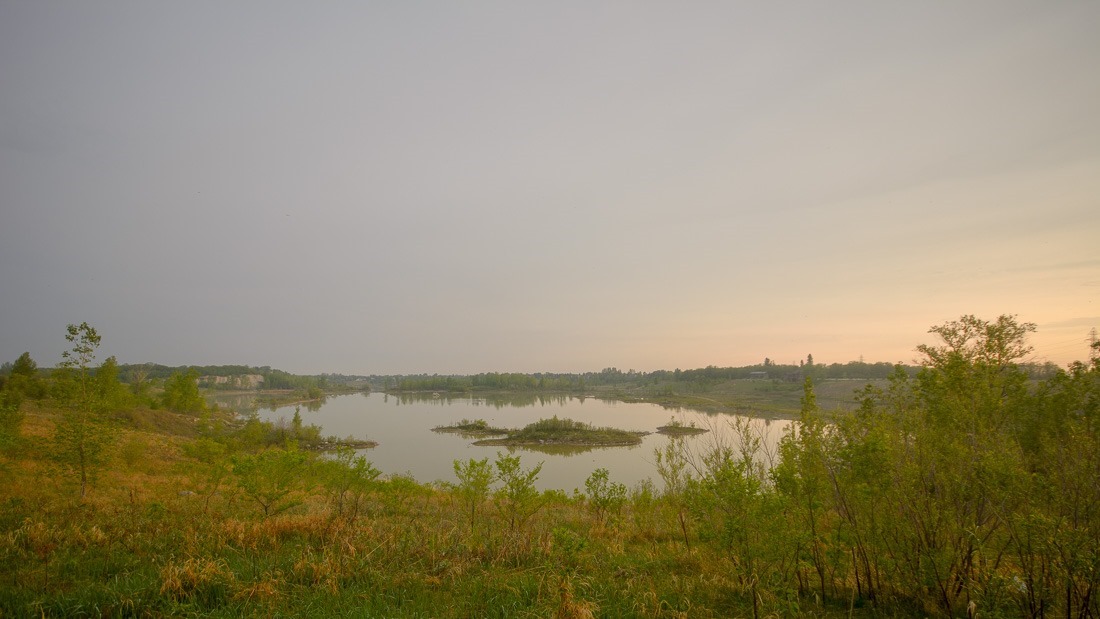 Sometimes, even on the way to a photo shoot with friends those pictures can be taken. The ancient quarries of Birds Hill, just north of HWY 59 was such a moment. I had taken a coffee with me (mornings like this need coffee) I decided to not rush to my destination but drink my brew quietly overlooking these old quarries. 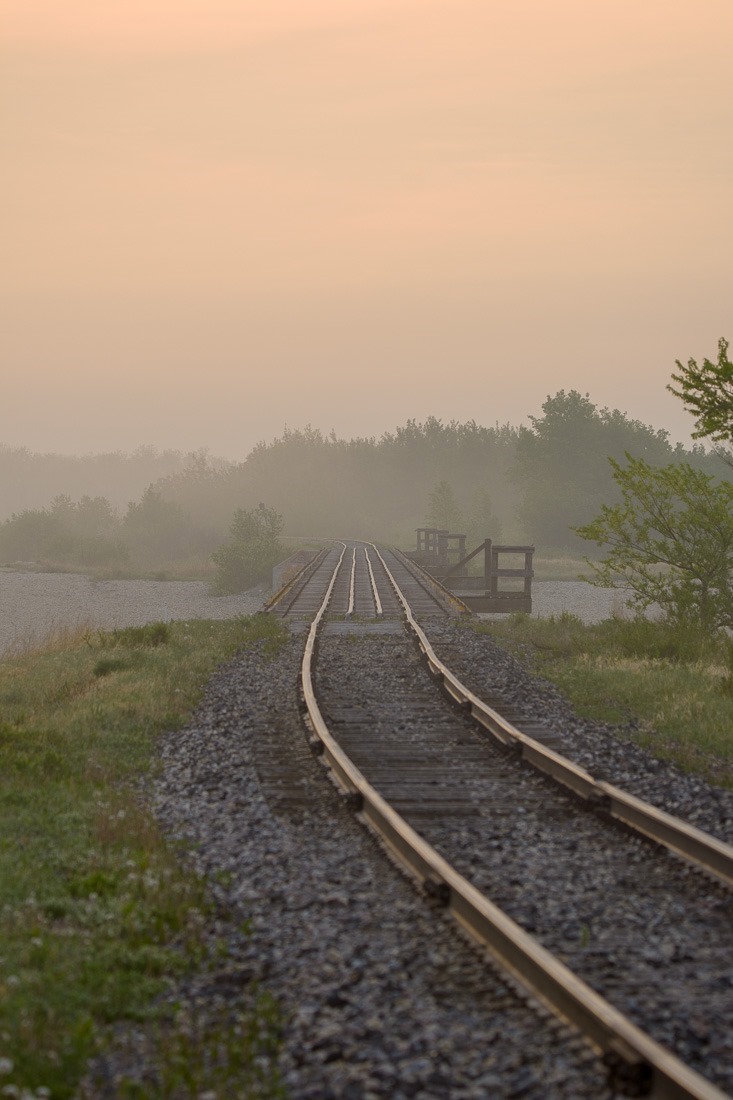 Once the coffee was gone, I moved on. The rising sun had become more and more shrouded in mist, telling me that the day would be completely overcast. I crossed the seldom used railroad on HWY202 and glanced east. I liked what I saw but decided to move on, thinking that I would get that shot at a later time. Ten seconds later I changed my mind and went back to get this shot. Good thing I did, since then I have not seen this shot again in that place. And for those telling me that I should not be on train tracks, a glance at my shooting position for this shot should tell them enough about my safety. Oh, I am writing about it too, so I must have survived. 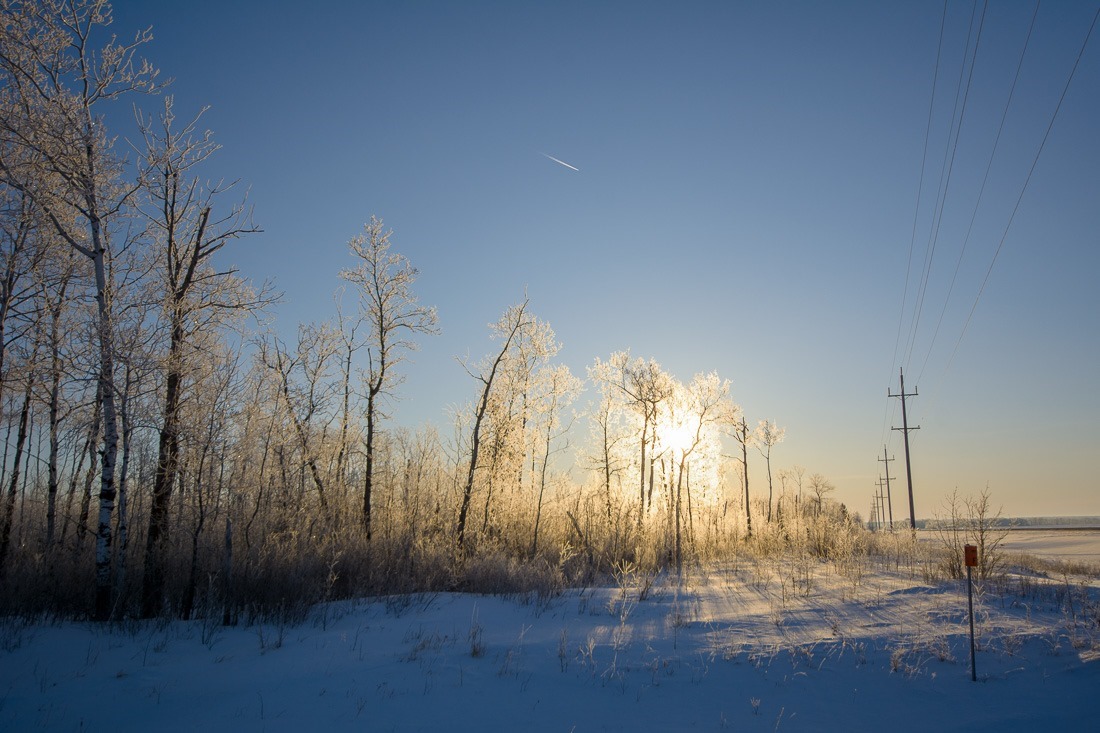 Other times, the “shoot” makes itself to be desired. Waiting for a good spot to stop, a good angle for a shot and much more, makes me move on and on. The above shot was such a moment. We had been driving for quite some time already, looking at the great shots we could have, without a place to stop the car. When we finally found a side road to stop on, it was almost too late to get what we wanted.

Early morning. Not the best time for me to be out and about under normal circumstances. But ask me to go out for a photo shoot and I can be up at 2am if need be. Think about what you could get in early mornings…