Literally. All weekend. Instead of hunting birds I decided to go and hunt for some foreign landscapes. Many people here in Winnipeg or Manitoba will already know the places I will show here, but this was a first time for me. As usual, a first time anywhere is full of awe and wonder. Well, mostly. 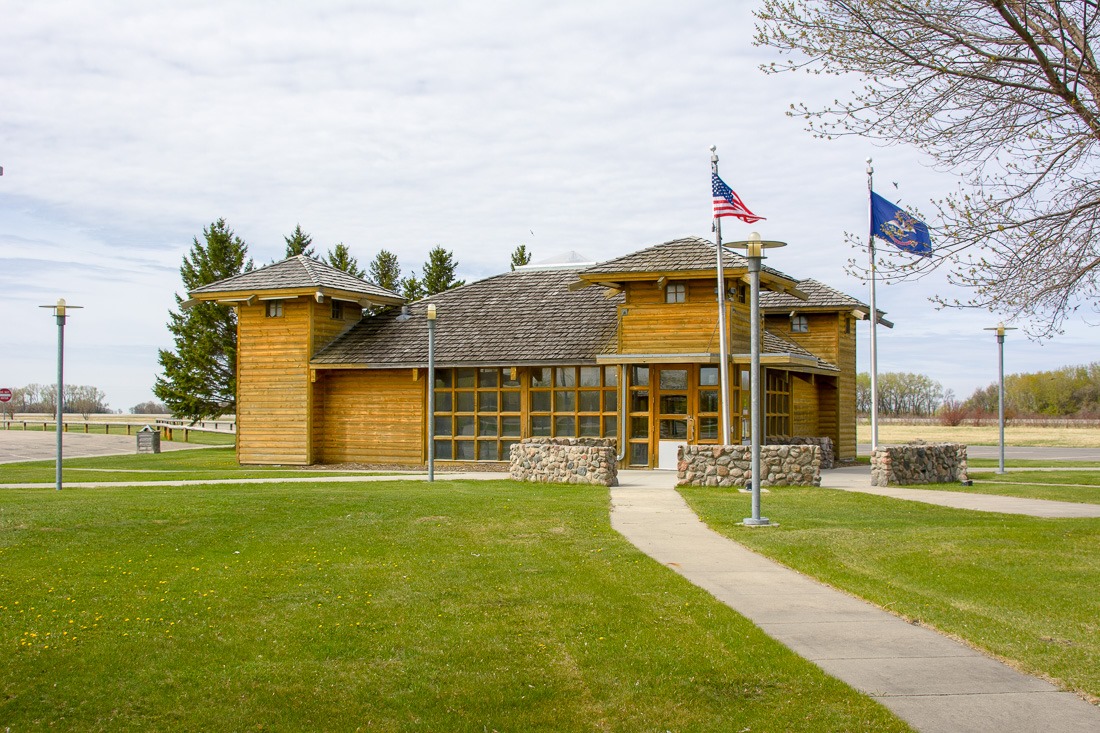 When I was younger, I travelled a lot and saw many different places and cultures. Most of them good, some of them are off my list of destinations forever.

When I still travelled with my parents to many countries in Europe, my place was always in the back of the car. But no sleeping or dozing off there. I was always looking outside, trying to read the signs and billboards along the way. I still do, but today is more to make sure I arrive where I wanted to go in the first place.

So we left for Grand Forks, nothing fancy, just an occasion to go over the border and get into a different country. As usual, I looked at it with the “tourist” point of view. Look at everything and hold back on the judgements. The first thing that struck me was that they have rest areas on the highways. Something that severely lacks in Manitoba. While not cheap, it is fairly easy to implement. No need for a fancy wooden structure like pictured above. Just a place where you can stop the car, have a break and move on would be enough.

Arrived in Grand Forks, the first thing to find is… The Forks. Well, it seems they have a whole set of them. Red Lake River with the Red River. The Red River looks like a small stream compared to what we have in Winnipeg. Looks more like a student river, still studying to become a real river

. The small stream called Red River is here supplemented by the Red Lake River. Something tells me that this area is prone to flooding. But more on that in a bit. 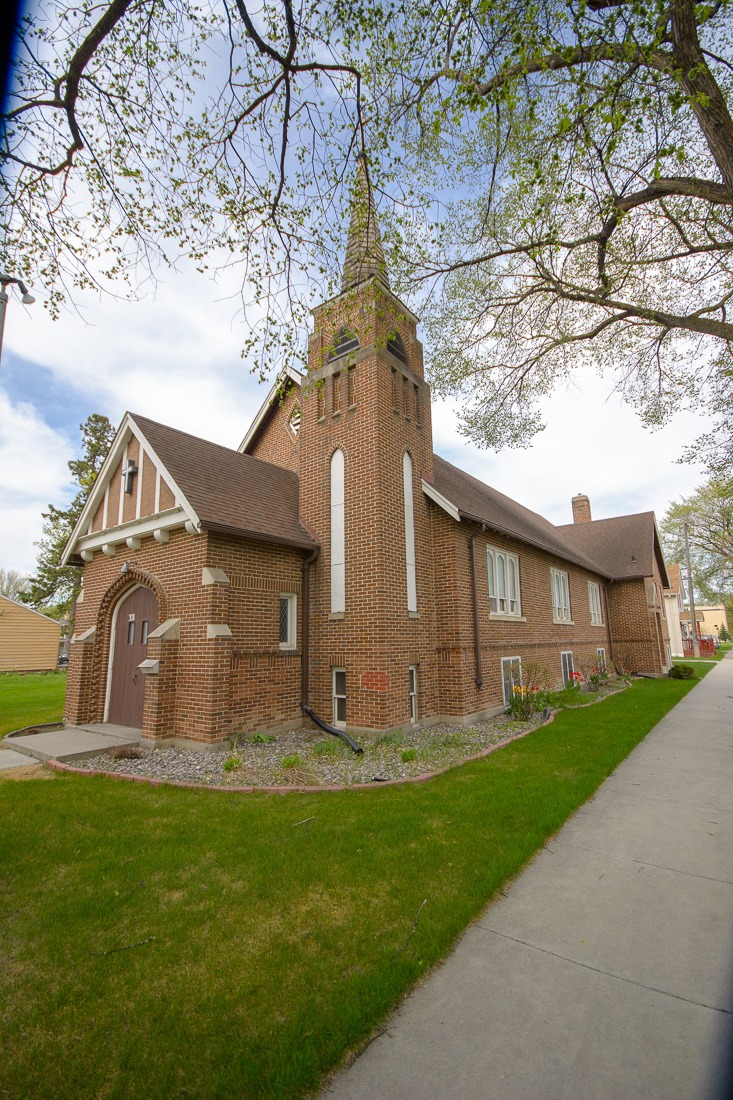 Small brick churches and bigger brick churches are everywhere. It’s nice to hear some church bells again. I haven’t heard them for a long time. As it is, probably not since I left Europe, some ten years ago. The last huge bells I heard were long ago, in the papal city of Avignon in the south of France.

We had been driving around and walking around quite a bit on Saturday, so it was time to go to the hotel. I will say little about the hotel, other than that we had a place to sleep… Dinner was outside, in a place not far away. We walked there, so that I too could have a little drink. One hears all kinds of monkey stories about the cops in the States, I had no intention of finding that out up close. So we walked. When we came back, the sunset was nearly done, the sun was gone, 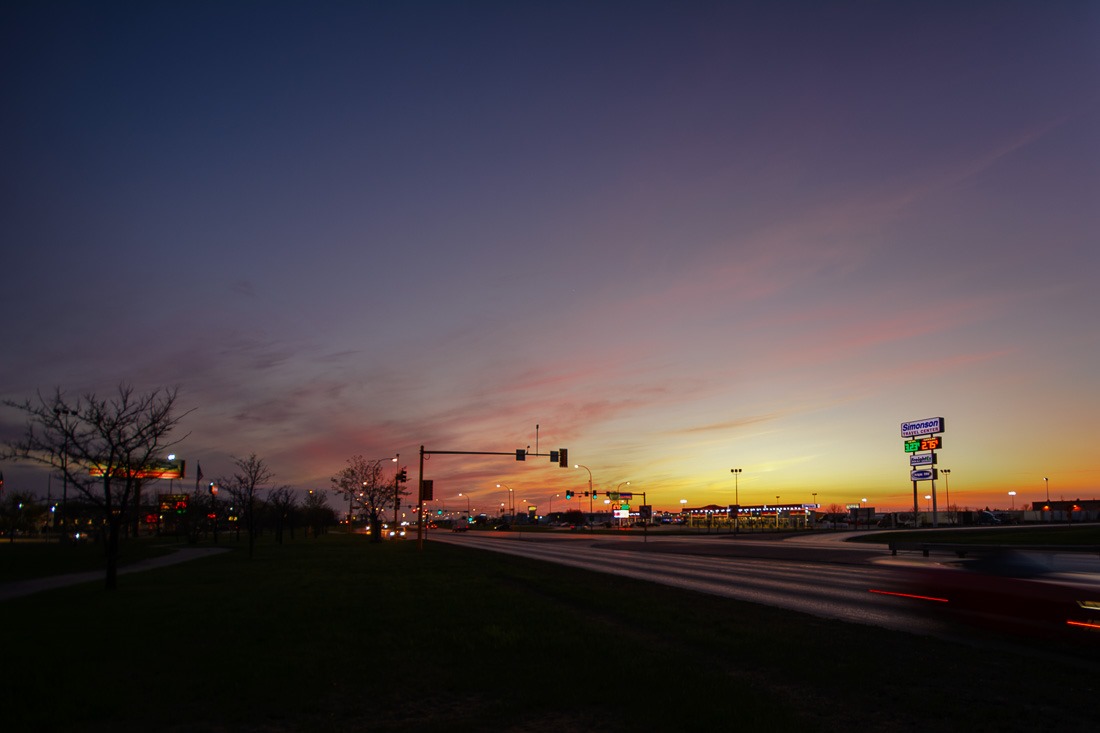 the sky ablaze with colour. Of course I didn’t bring a tripod with me so a nearby bridge had to become my stabilizer. It worked out pretty well, I think. The hotel was on the far left, HWY 29 overhead. After that, it was off to bed and hope that the morning would stay away for a bit. Enough to have a good rest. 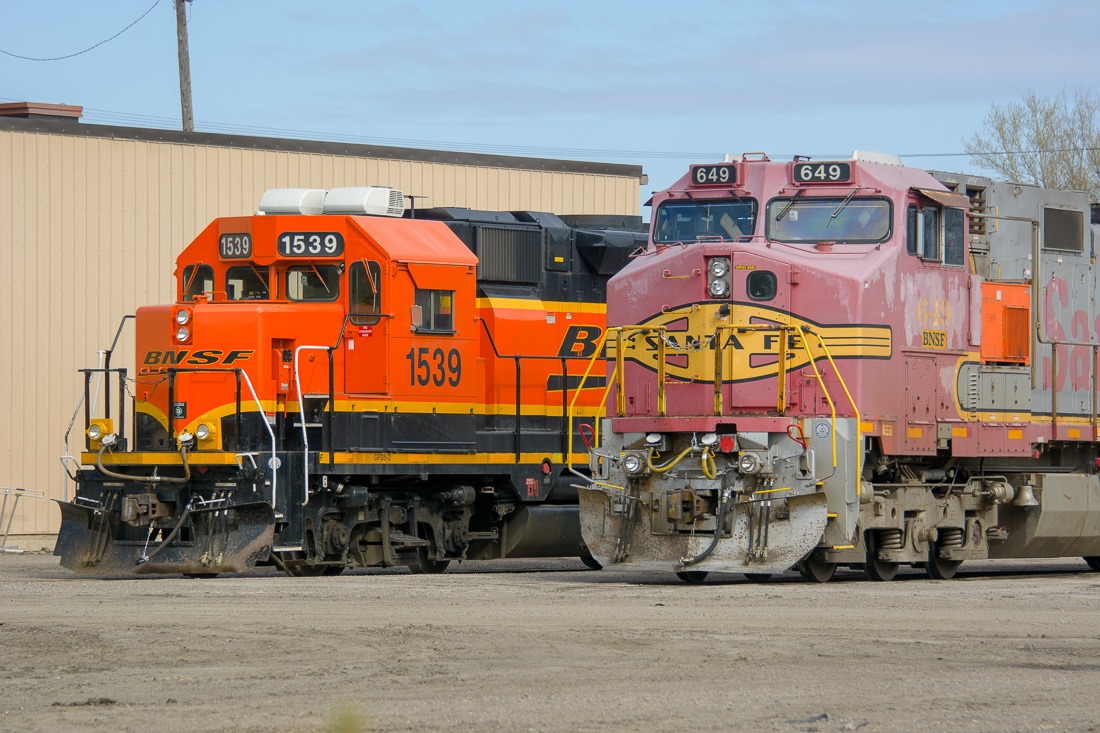 Locomotives at the end of the line

As a matter of fact, it did. The next morning, a quick breakfast at the hotel. They said it was free, but I’m pretty sure they included it in the price for the room… Coffee didn’t taste like much to we went for a Starbucks somewhere else. As it turned out, the train depot was across the street. So while the others were having a second breakfast (I’m trying to limit myself a bit) I was going to get those trains. Trespassing is not a hobby of mine, so these  shots came from the street. For those locomotives it looks like they have reached the end of their lines… 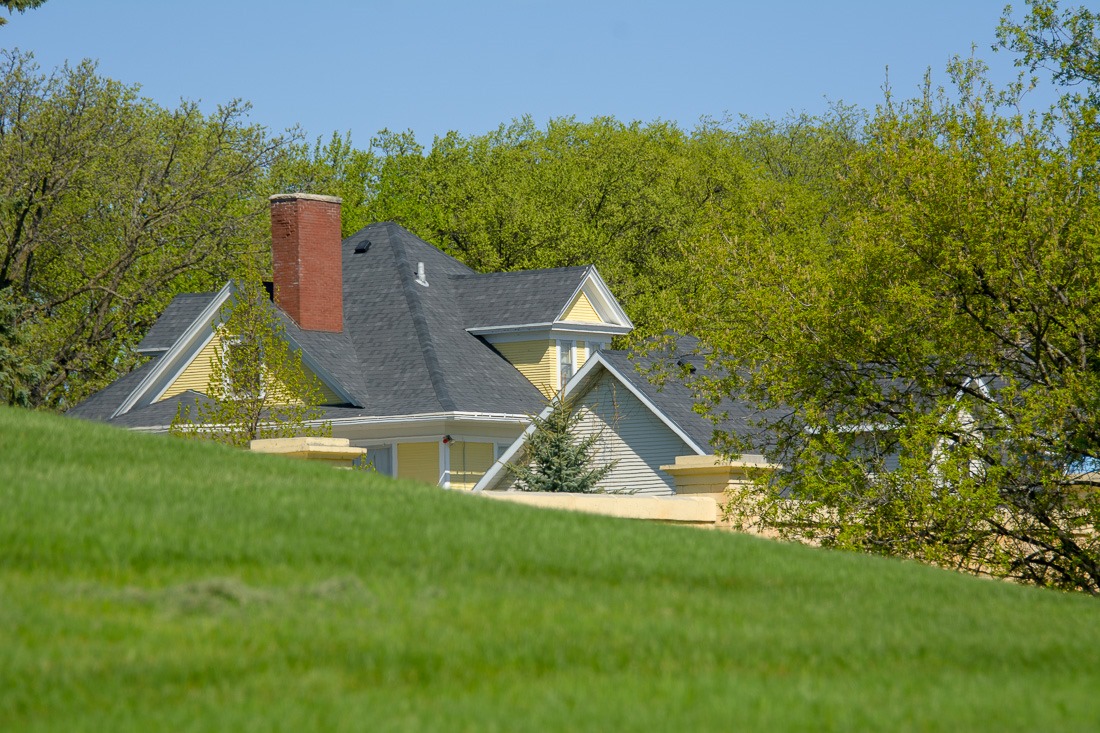 Mansion towering over the dike

Then, off to the more historical part of town to see what more I could get in terms of pictures. We walked/climbed over a dike and found ourselves in a floodplain. The river was far down below, at least 40 feet as far as I could see, but things were prepared to get way worse. Luxurious houses were built just on the other side of the dike as you can see above. But building dikes is not always a possibility, lack of space can be one of the reasons. So what do you do when you have no space for a dike? 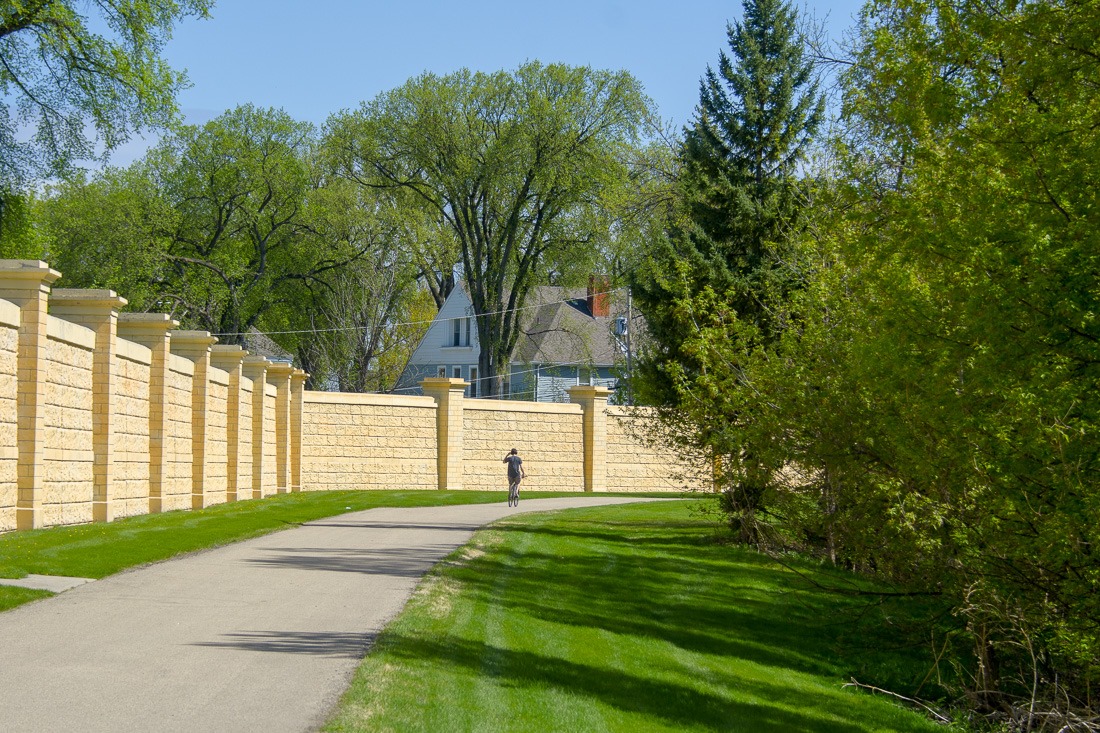 You build a wall. I know, building walls is all the rage in the United States nowadays, but this one really has a function. This one is to hold out flood waters when they arrive here. Like I said, the current level of the water was at least 40 feet lower, but the wall suggests that that can change each year. One thing that struck me was that this wall, although a few kilometres long, had no graffiti on it anywhere. I saw no surveillance cameras so keeping this wall clean of graffiti must be a case of education.

“Alleen gekken en dwazen schrijven hun namen op muren en glazen”. A Dutch saying stating that only Deranged and Fools write their names on walls and windows. Meaning that only those who have nothing to say scream the loudest. I guess everyone in Grand Forks has something to say. 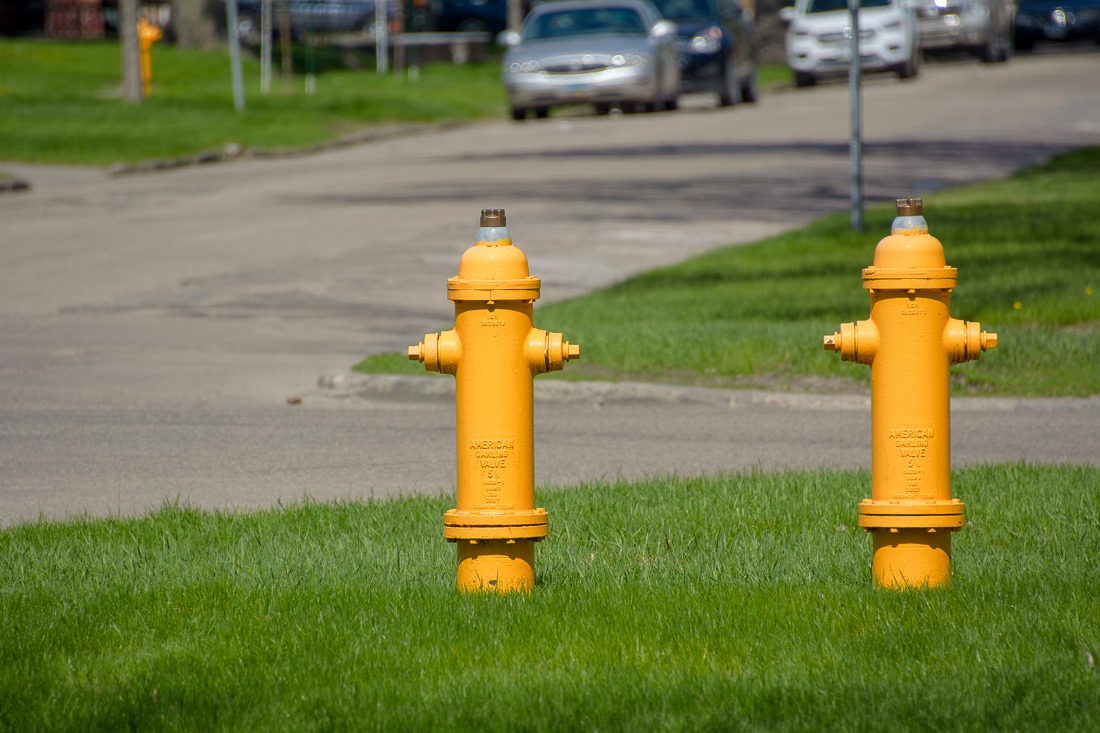 A pair of Hydrants

Hopping over the dike back into town, these two friends just begged me for a picture. I guess they will be “friends forever”. Or at least until the fire department decides otherwise. 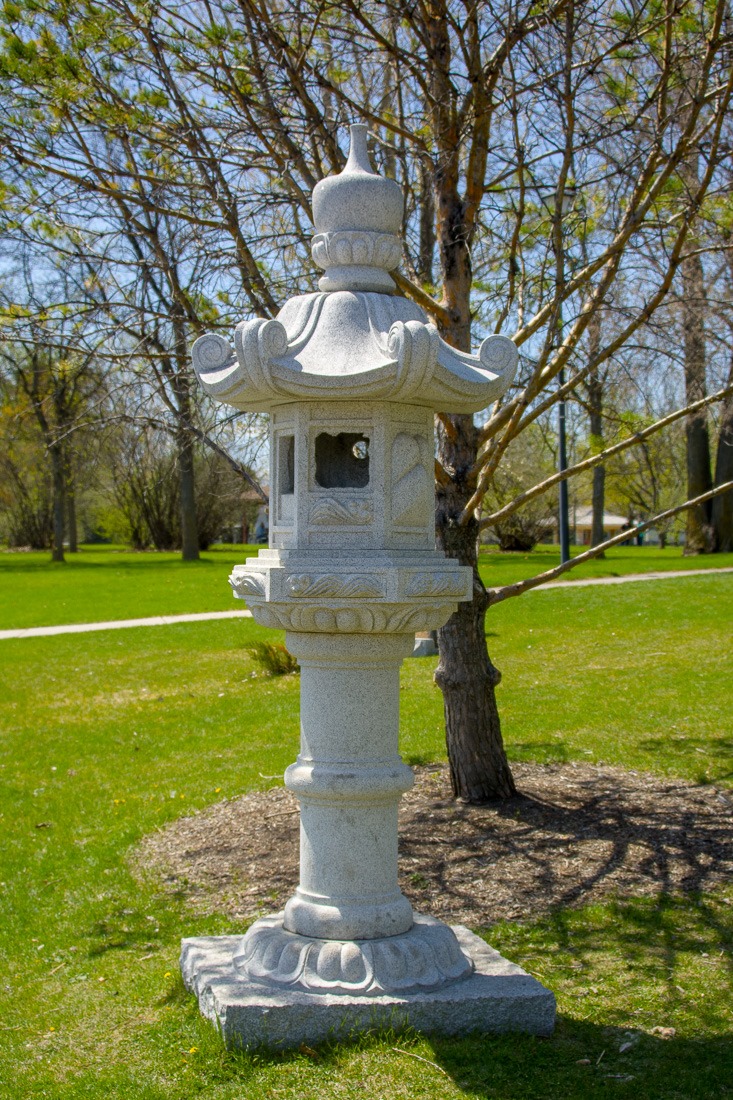 A last little picnic to celebrate my daughter’s birthday in a Japanese park yielded a full stomach and a picture of this stone lantern. I have always loved those things, but never got a way to get them in my yard. This one would have been a bit too big anyway, it was towering over me. It must have been at least 7 feet tall. A smaller version would have looked nice in my front yard…

And so the weekend passed by, down south in a “new world” where everything is supposed to be different but surprisingly similar to anything here in the north. I guess we should be able to exchange a lot of ideas and possibilities.