Winter is dragging its feet to get out. Old Man Winter still has more stories to tell. By now, most people have had enough of winter and want to see something warmer. The quickest way is to go to Mexico on a beach and wait until the news of sunshine and warm temps reaches the beach. Or, one can try to find the signs of spring that hide beneath the snow. 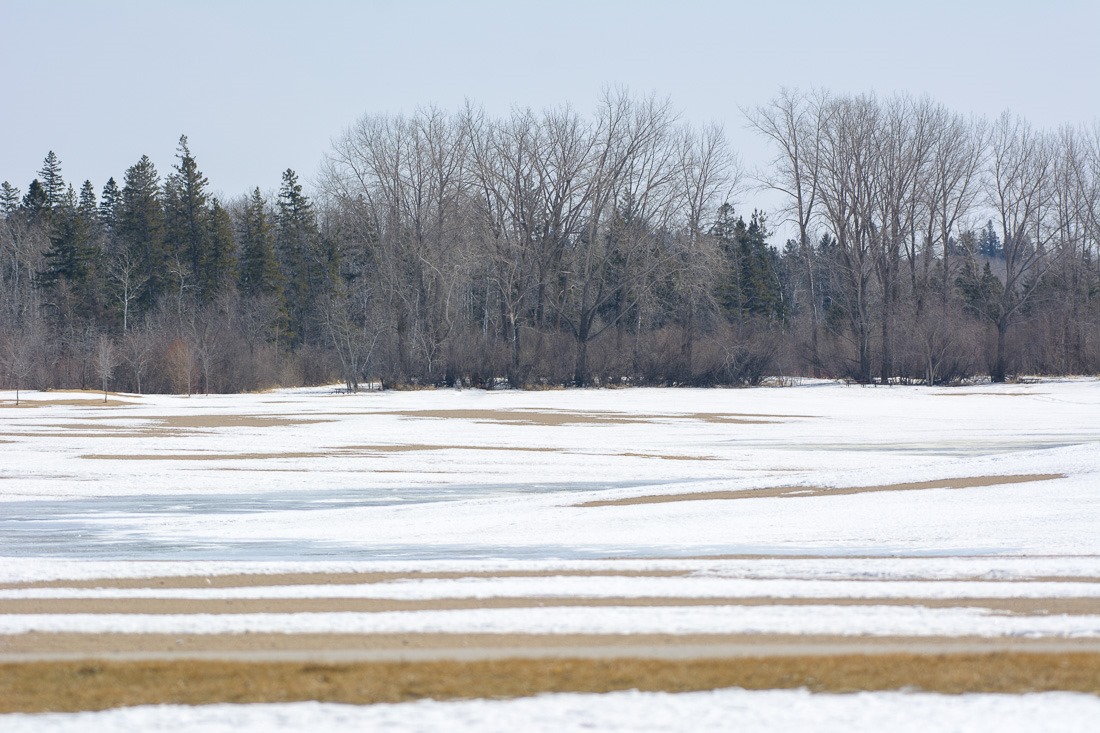 Last weekend was kinda nice, temps around 0C, probably something like –0C, just enough to keep cold surfaces slippery. The little wind there was was enough to make you feel cold, but as soon as the wind died down, one was feeling warm. Where I come from, this is the weather that is the most prolific for germs; they arrive in the warmth and keep you busy in the cold.

But weather or no weather, it was time to go outside and see what was going on. Birds Hill Park still looked frozen enough to not even show us a single bird. Not even the Canada Geese that usually take up all the free spots, long before other species arrive, had arrived. A bleak looking field, partly covered in snow and ice, without a living thing on it. 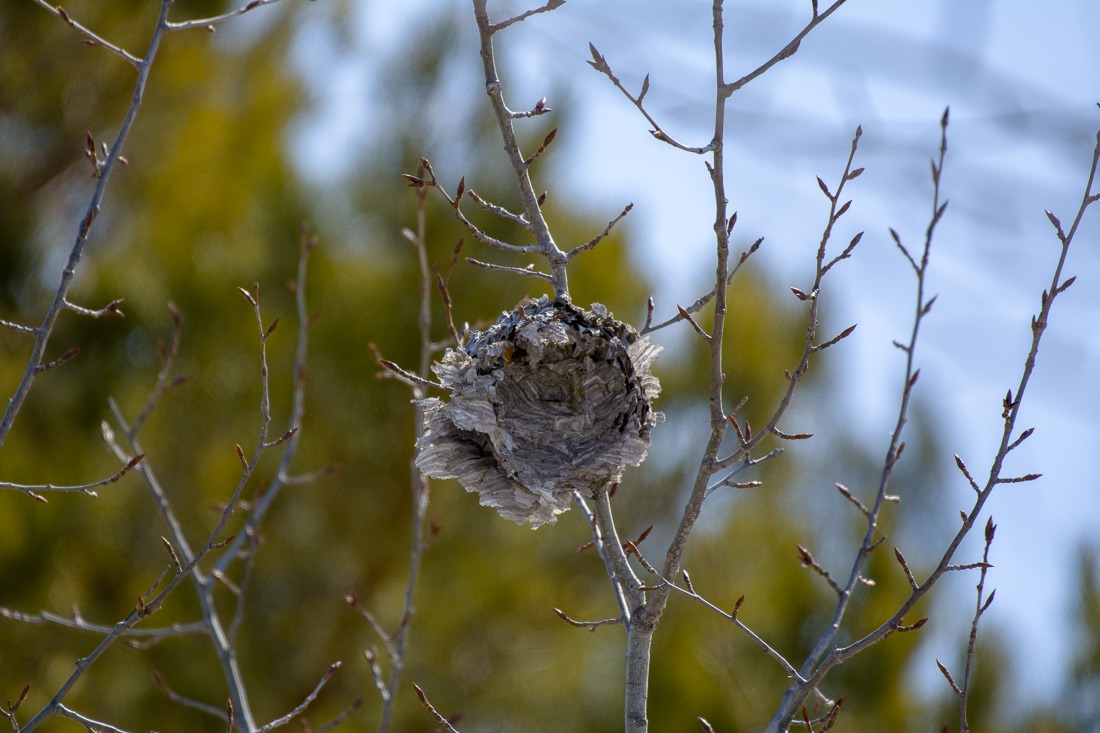 Remnants of last summer were still visible. A wasp nest of some kind jumped out. I guess that normally that nest would be surrounded by leaves and virtually invisible. Since the winter was mostly dry and cold, the paper (or papier mache) still survived. The tree on which it was constructed clearly starts to show signs of spring. Buds are ready to go green, as long as those temperatures rise. 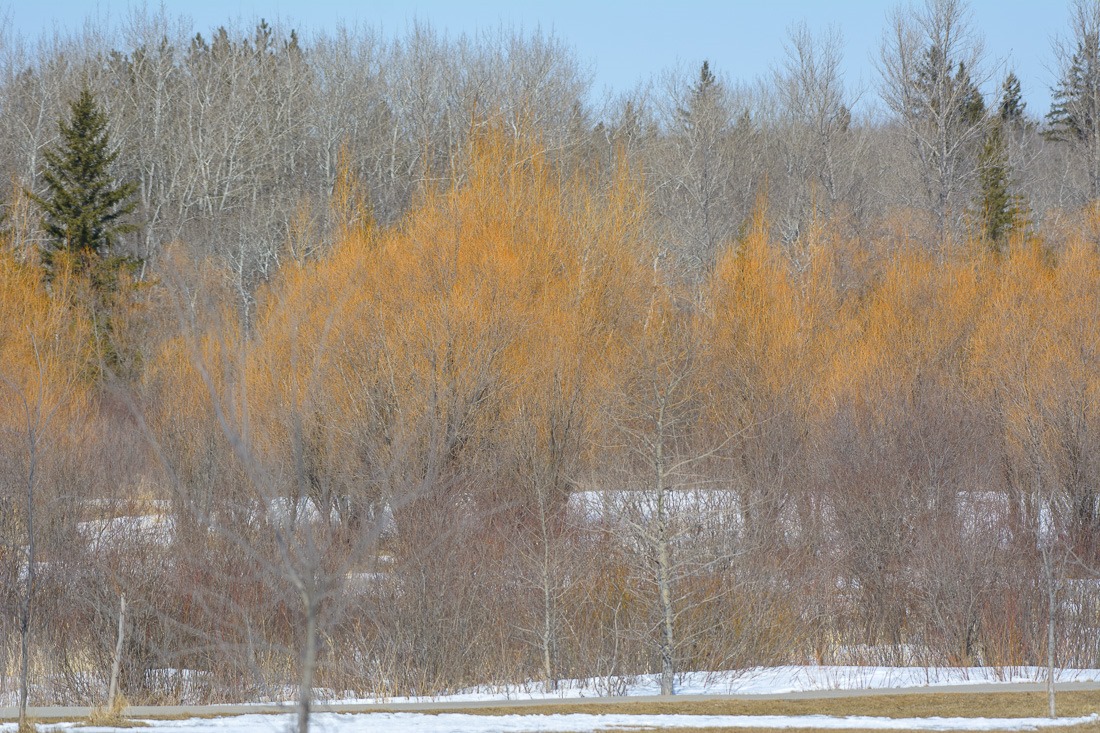 A hint of colour

A little bit of colour can be seen in the trees that have no leaves just yet. These trees colour their branches before they even get leaves. It does make for a nice contrasty image. 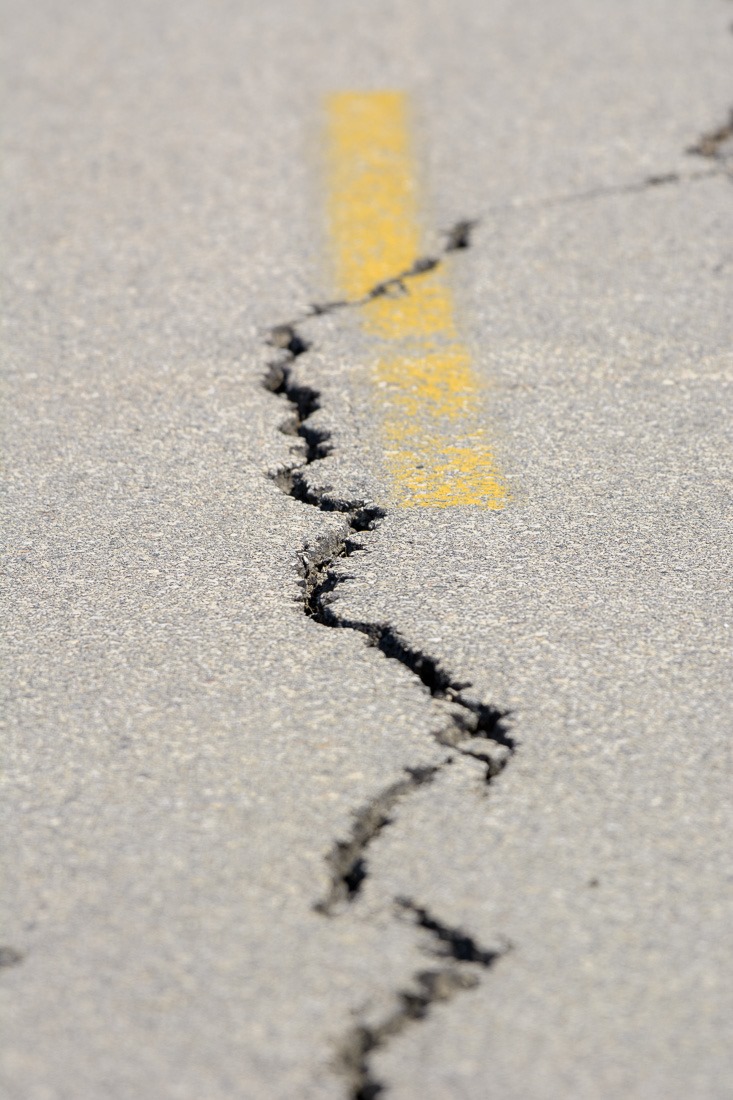 Drought and frost does wreak havoc on roads and paths. We can complain about the horrible condition of our roads, but Mother Nature, of better said Old Man Winter makes short work of all the roads. Up close, this looks more like the San Andreas Fault than a simple path in a park.

After this we had enough of Birds Hill Park, and headed out into the fields in search of birds or other life forms. Apart from the odd crow flying around, the fields were empty of life. Not a single feather to be found. Let alone rabbits or even deer. I guess that that little bit of wind had become just a little bit too nasty to come out of hiding. Home sweet home, I should say. 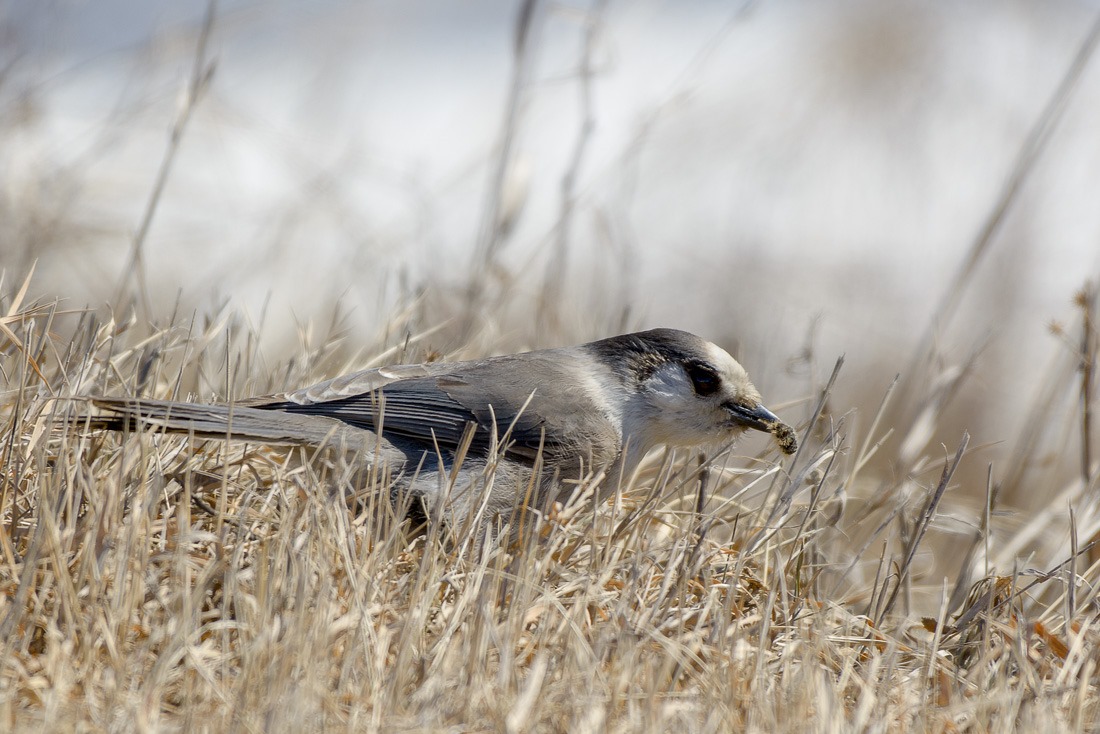 After a lot of gravel road we ended up on Highway 15. We didn’t want to go home just yet, so off to the east it was! While I have joked many times that one can find all kinds of birds on Old 15, the only ones being here were the Grey Jays or Whiskey Jacks. Last year I remember having shot these birds with a friend for whom it was a lifer, I am not sure if these birds were, in fact, the same. In any way, they were not camera shy. 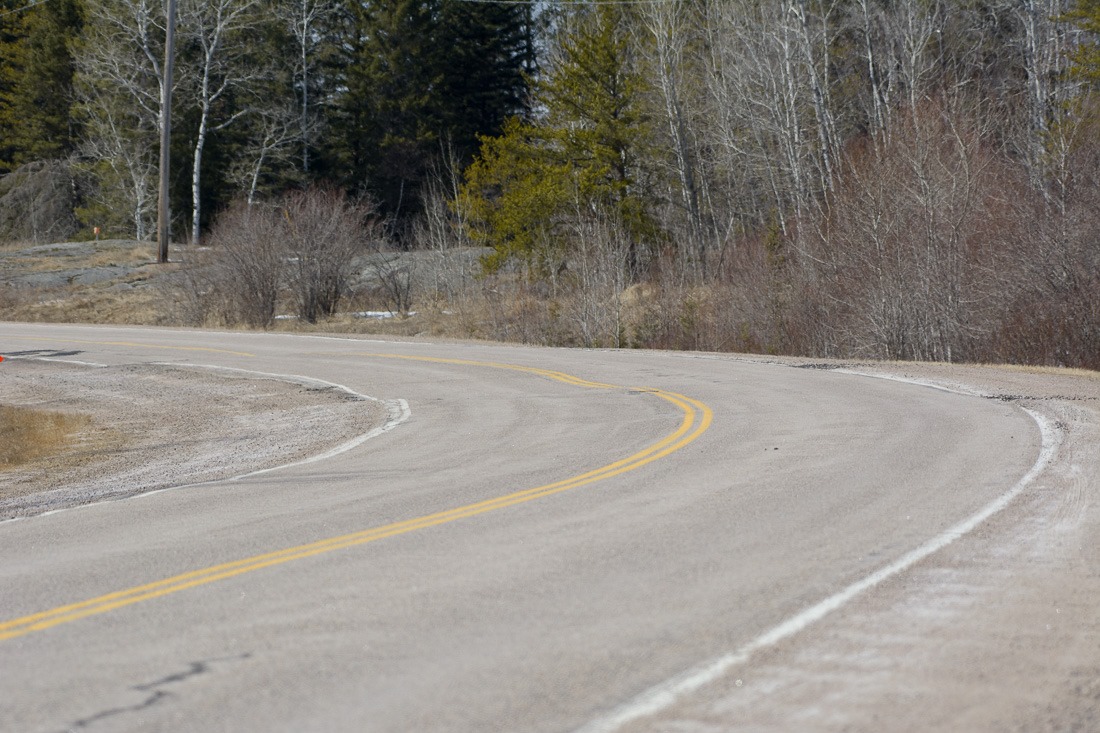 HWY 44 is no racecourse

Rennie, with the Alf Hole Goose sanctuary turned out to be out end point for this trip, the road towards it was far from smooth. Here too, frost and ice had been unkind to the road. Pushing the speed limit was a bad idea to say the least. Granted, even during summer months this road is not the best, but right now I wouldn’t recommend it. 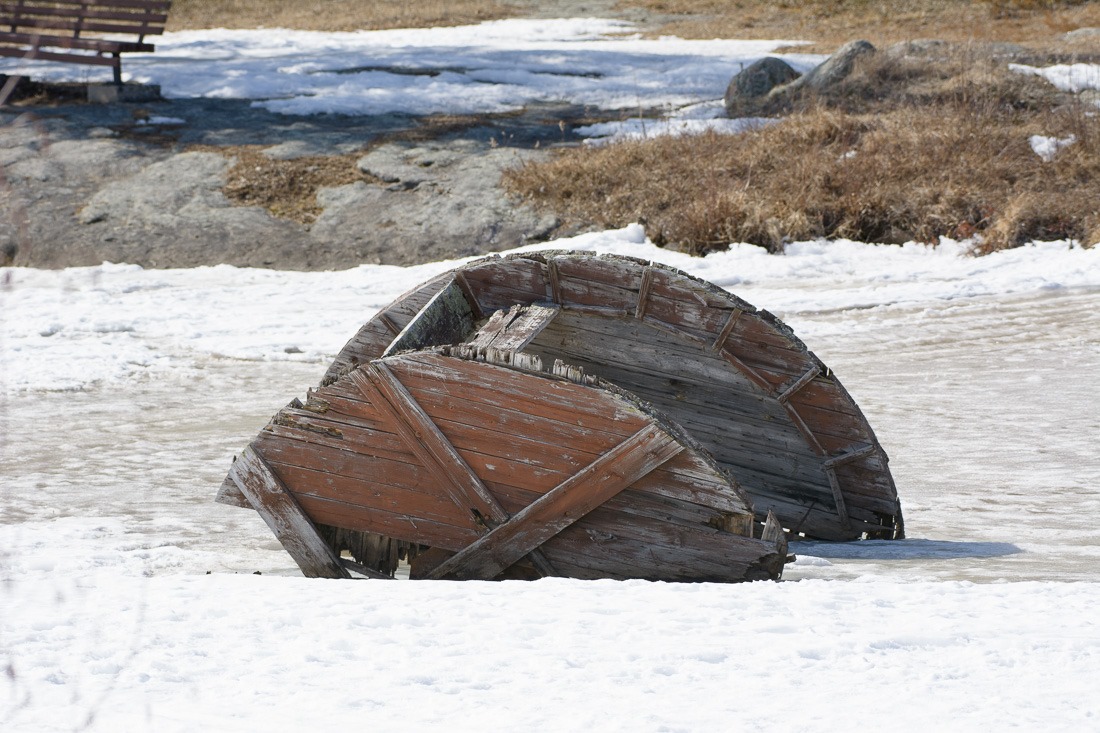 The Alf Hole Sanctuary was as quiet as a mouse. No wind, the sun warmed us up a little. Of geese there was no sign. The old spool in the water is still there, but each time I see it there seem to be a few more pieces missing from rot. 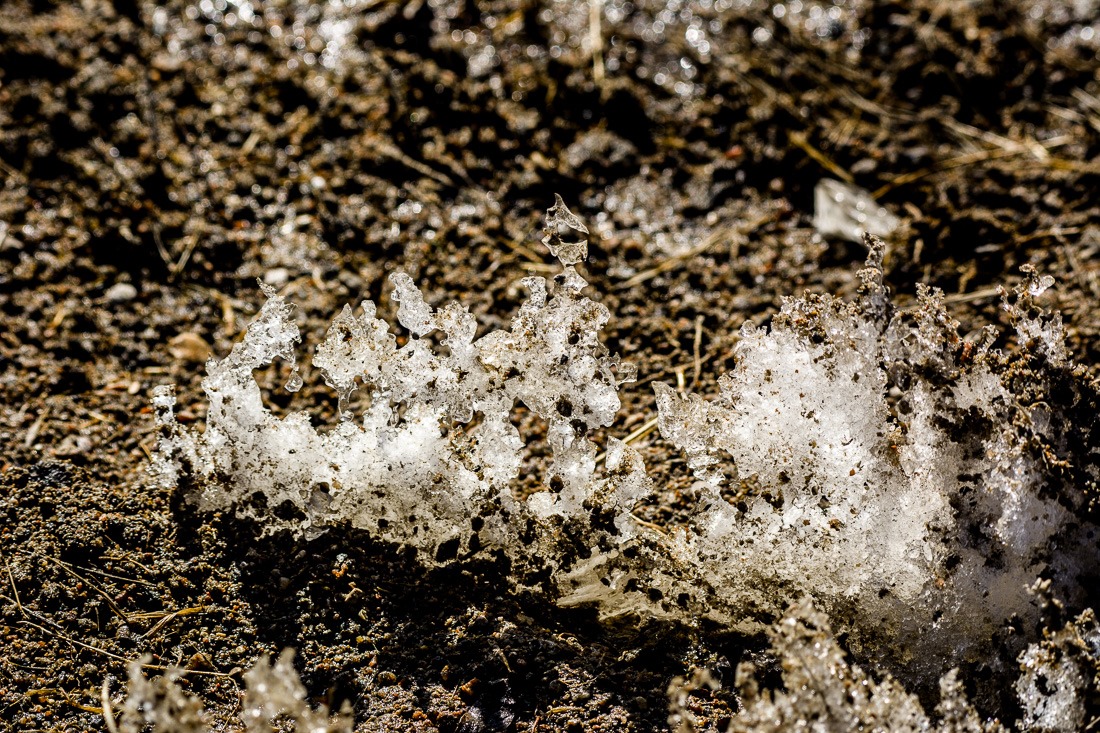 The ice and dirt from up close made for tiny sculptures. Every year I am surprised about the intricate forms of the melting ice. Most of the time, a picture does no good, it doesn’t render the way I see it with my eyes.

Signs of spring are here, but you have to look for them. This time a bit of a potpourri of pictures, with little story as adhesive between them.