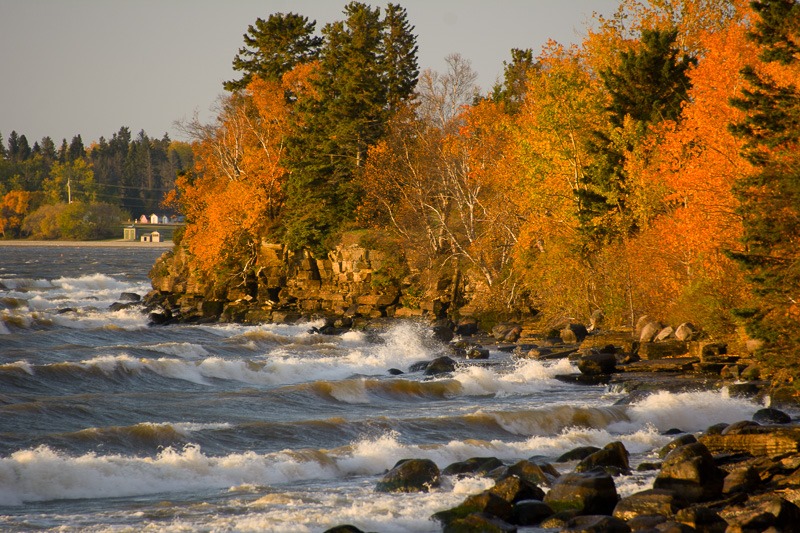 Manitoba has no relief to speak of, so images of mountain sides and sweeping valleys are out of the question here. Therefore getting those colour palettes seemed difficult. Yet this weekend, they were possible. There had been virtually no wind to clear off the leaves, a fairly moderate temperature range and some rain.

We got up way before dawn to get to Hecla Island, to catch the first rays of the sun. Not so much to warm us up, but to get that “Blue Hour” effect. However, the wind had picked up quite a bit and keeping the camera stable on the tripod proved to be an issue. I was not happy with my shots and decided to get breakfast and come back when hand-holding the camera would be doable. 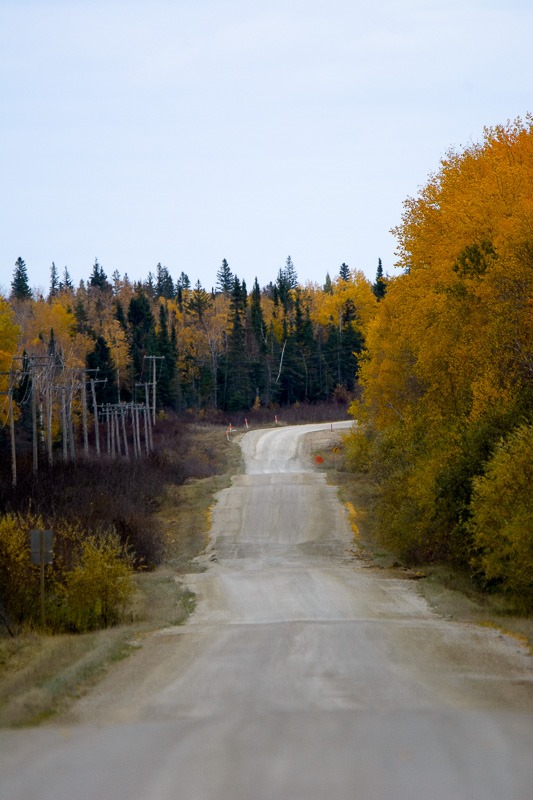 Once we had our shots from the shoreline, we left the island for different photographical climes. A road hardly travelled is all we can ask for. Luckily those roads are plentiful in Manitoba. That same road is also not paved in any way. That is also no exception in Manitoba. Good thing we took a rental car, not my own. Mine is new and I like it to stay that way for a while… 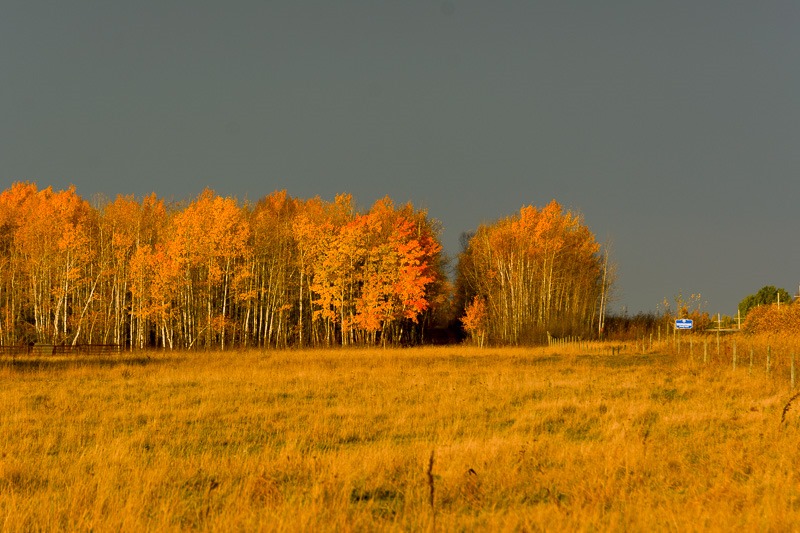 A row of trees over a field… what a boring sight until you get the right lighting on it. Apparently the weather gods had decided to ruin our day by hiding the sun and showering us with liquid gifts… The contrast between the dark sky coming up and the sun on the golden trees was simply stunning. Difficult to pass up on that kind of shot. The sign on the right says “Steinsstadir / Rock Farm”. I can believe that part, farming in Manitoba back in the days of homesteading was far from easy. Naming your farm the Rock Farm shows that they still had humour after the days of hard labour. 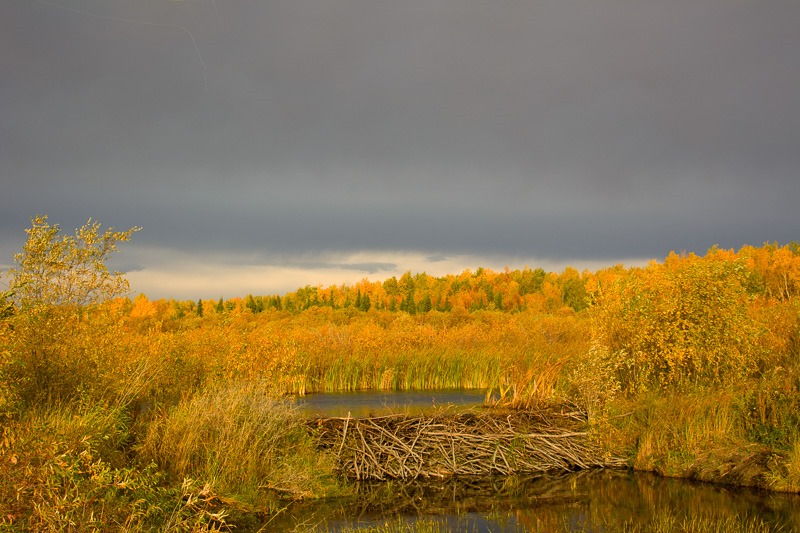 Another one that never rests to build his house or castle is the beaver. Here a beaver dam that holds at least a few tons of pressure. The light was phenomenal at this point, with darks skies moving in and sunrise light at our backs. A few minutes later the clouds took over from the sun and Nature’s Soft Box was with us for a big part of the day. Some people swear by soft boxes, I prefer a bit more light if I have a choice.

Vertical pano of a path

Unfortunately with Mother Nature, we have no choice and no say in the matter. We take what we can get and if we can’t use it, then we move along to do something else. Now here’s a thought… Some people say that there is good light and bad light. The Good Book states “And there was light, And it was good”. Now why would I argue with that? Let’s use all light and make the best of it. 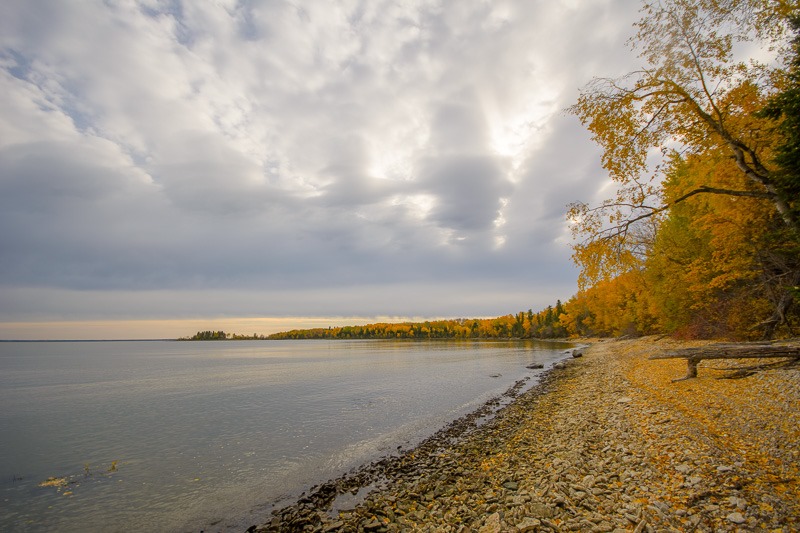 Then we went searching for the Limestone Crevasses near the end of the road. From what I had seen from other pictures of people that had been there, I decided that these crevasses should be in a certain spot. I was not far off, but needed to hike a bit to get there. That hike went over a stretch of beach. The beach was deserted, I guess that a temperature of +8C is not very conducive to beach behaviour. At any rate it gave us some very nice shots. 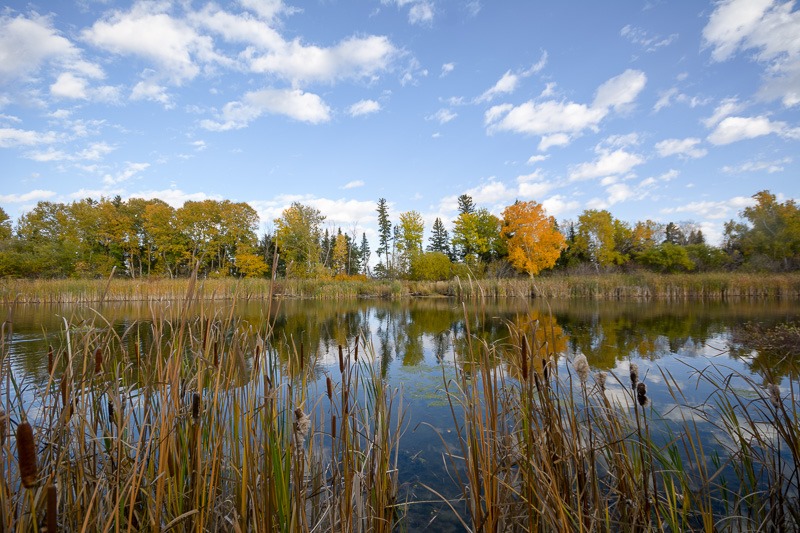 Once we had visited the crevasses (more about that in another post), the parting shot was this one of a pond. The clouds had let up a bit and the shot was full of colour and life. If you look closely at the picture you will find a beaver hauling home some groceries.

So when light decides to be different from the plans… Would you have guessed?