As prairie Canadians we are supposed to have a subscription to frosty mornings. Surprisingly enough, this is the first one this year and we’re already at the end of November. Sometimes weather conditions are weird and high or low temperatures persist in a strange way. A few years ago all the weather guys were convinced that the North Pole had a severe case if resilience with high pressure. Leaving us with months of cold weather. 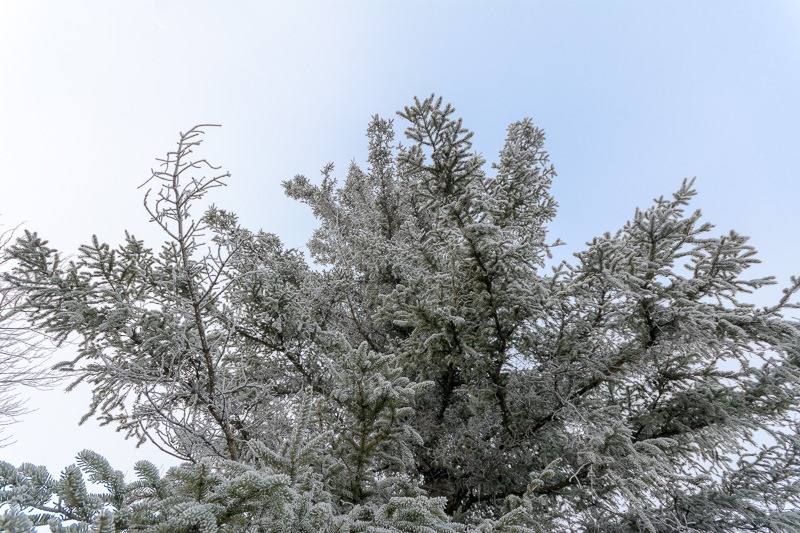 Other places have Ridiculous Resilient Ridges where normal weather patterns can’t get past. This year it all seems to be mellow, and in my opinion a bit flavourless. This morning, however came to life for me.

When I got out of bed to feed the cat, I noticed there was hoar frost on the trees and the houses on the other side of the street had become invisible. What better way to wake up and say “Hey, let’s get out there and shoot!” ? 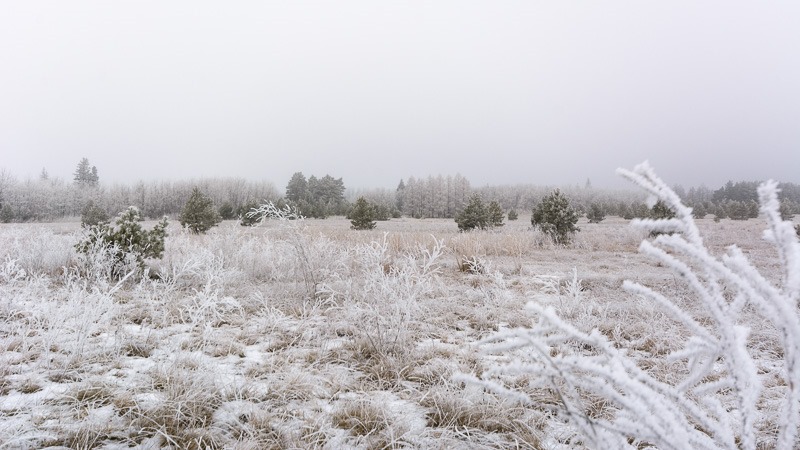 So I was off to Birds Hill Park. Now, Birds Hill Park has been one of my destinations since I came to Winnipeg. Most of the places that the park has to offer have been explored. Shooting them is no longer a challenge or even a wish. But when hoar frost and fog show up, the whole place takes on an atmosphere of mystique and wonder. 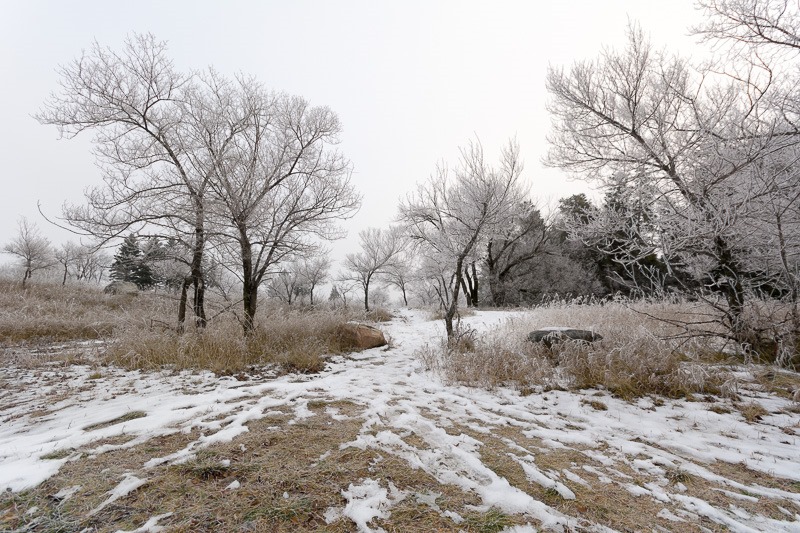 When you drive through the park, the fog accentuates the different layers in the landscape and filters out any intermediate ones. The landscape then takes on the aspect of a theatre stage instead of a great landscape. Perhaps that is because the more black and white type of view we get. I’m not sure. Let’s say that it takes on a more painterly nature. 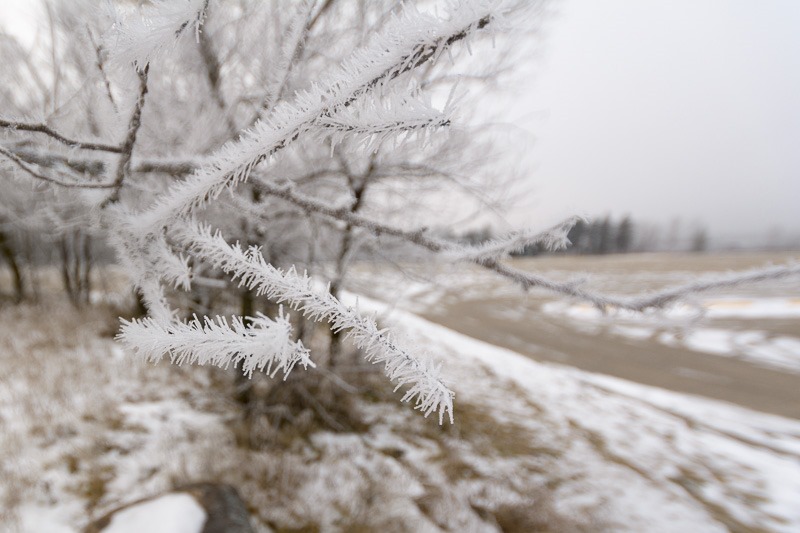 With hoar frost, the desire and need to take macro shots is overwhelming. A good macro lens is then a must. The above shot was taken with a 10-20mm wide angle, focused as close as possible. A lot of background still remains in the shot, but this one I liked.

Back to the car to change lenses. Changing lenses in this kind of weather is only done inside, never outside. If there is any kind of moisture inside the camera, you really don’t want it to freeze in there. 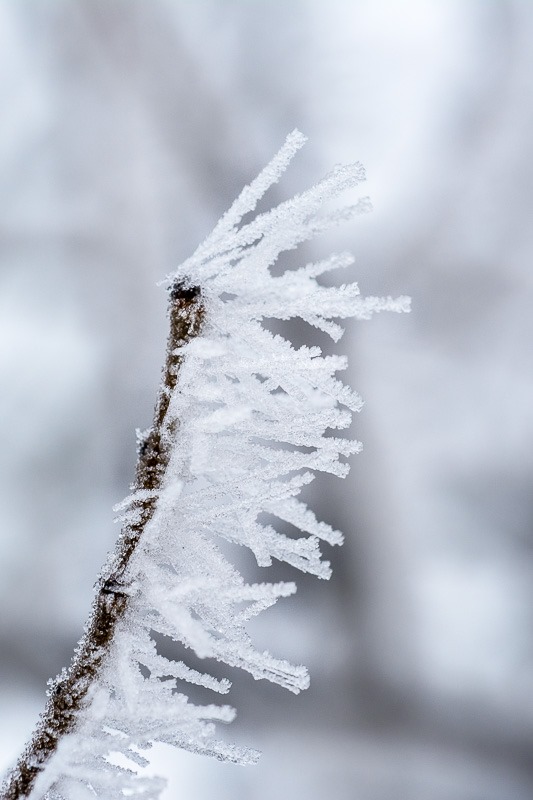 With a real macro lens, that same branch (or was it the next one? ) looks quite different. Tiny details now show up and most of the background is a blur. But something tells me that a macro lens has more use in any other season than in Winter. Insects of all kinds look way more interesting with that macro lens. In winter there are no insects here. So I’m reduced to photographing hoar frost and tiny ice formations instead. Happily it is not the only lens I have 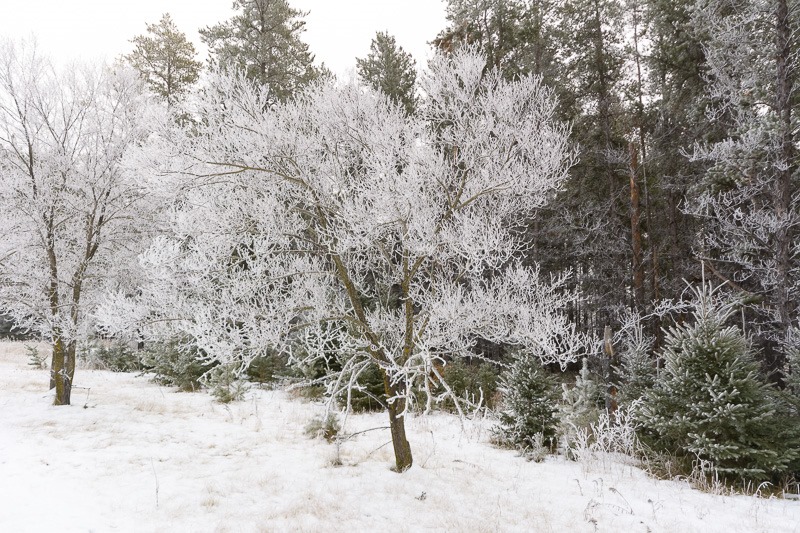 A hint of colour

When looking up from the tiny crystals, a different landscape presents itself. A mostly monochrome landscape. Some time ago I posted that winter was a time for black and white photography. Today that was nearly also the case. Nearly. With the warm temperatures we have had until now, there is still a lot of green under all the white and it shows. An otherwise pretty boring picture now still has hints of colour in it. 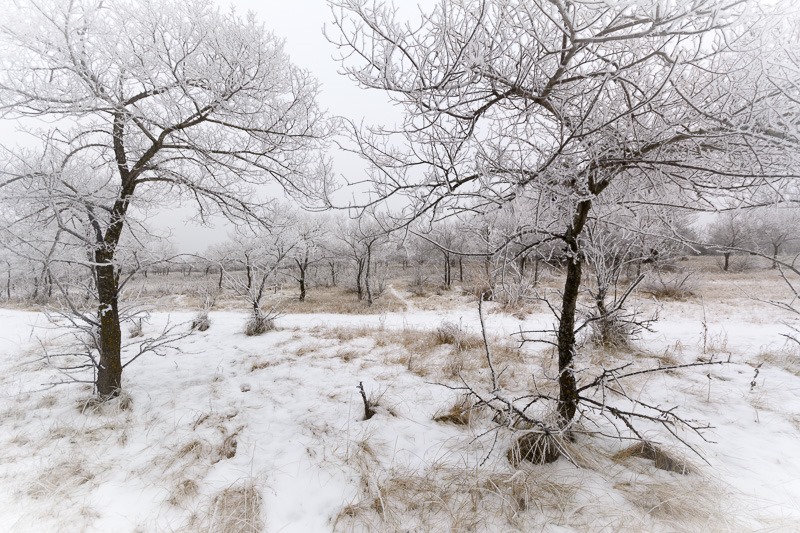 When the remains of colour is not green, the golden grass shows though the little bit of snow and provides a nice golden accent to the world. Above there is a small trail used by deer and other wild animals. Although wildlife is pretty scarce in Birds Hill Park, Deer and coyotes are known to move through and leave their tracks behind. 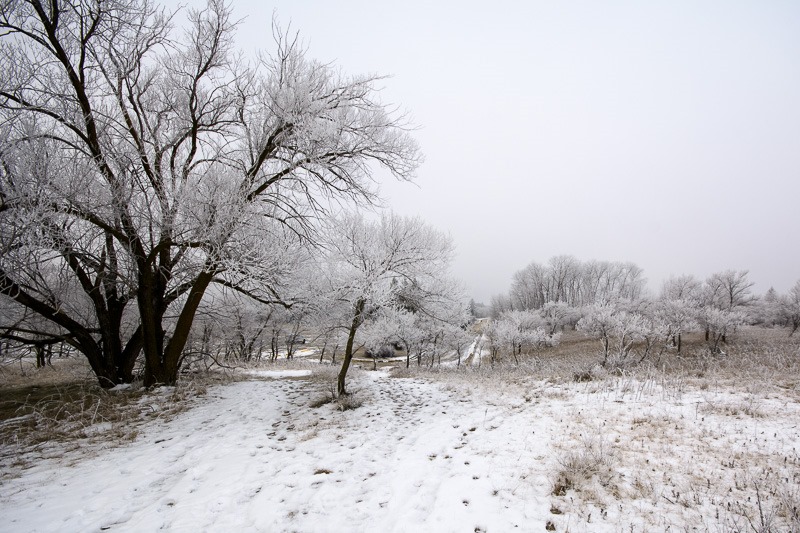 Humans also leave their tracks. In the form of asphalt and concrete slabs. Others call that roads, me… not so much. As a European I am used to better quality surfaces for my car to roll on. That, I call roads, this… no comment 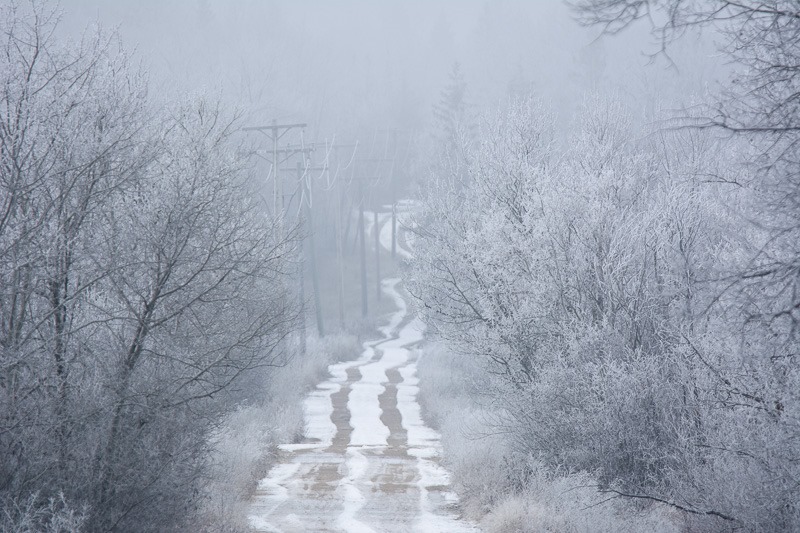 A last glimpse on the different paths in the park. This one is a service road that is closed to the public. When I saw this, I immediately knew what I wanted to shoot it with. My long gun of 600mm. A 600mm lens has the uncanny ability to compress perspective and make distances smaller. As a result a perfectly straight path can look crooked and bumpy. Mixed in with the hydro poles and the hoar frost, I though this was a nice shot. 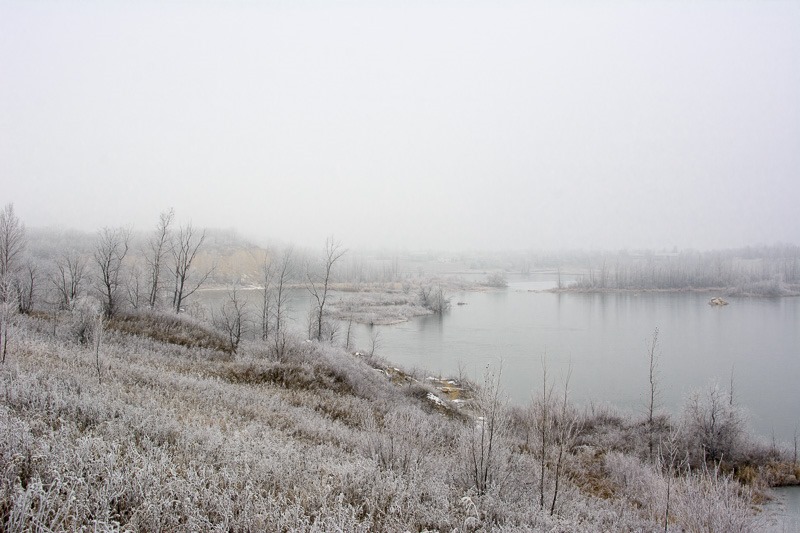 By then it was time to think about breakfast and return home. But not without having a glimpse of the Winnipeg Mountain Range, just outside the town of Birds Hill after which Birds Hill Park was named. This old quarry is now a place of entertainment in summer and winter. It is slightly off the beaten path we call Highway 59, and can yield spectacular perspectives in day or night.

Or in the fog.