Ah, October. Month of many transitions in the year. While September heralds the arrival of Fall, it is October that makes sure everybody understands the consequences of that arrival. Between warm days and days of near freezing, green trees and meadows and bare branches, October has it all. 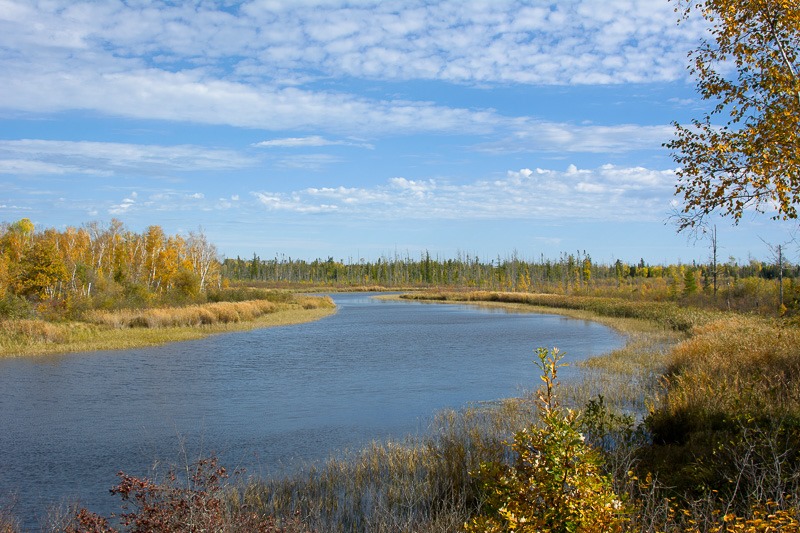 October is even more special to me as I was born in this month. But that point aside, October is a pretty special month if you compare it to January or even July.

October starts with mostly everything the summer has brought us. Green leaves and warmth. But like an old-fashioned music symphony, that green is soon to change into a riot of colours. Quiet skies now are in turmoil and bring hard wind and cold for a few days. 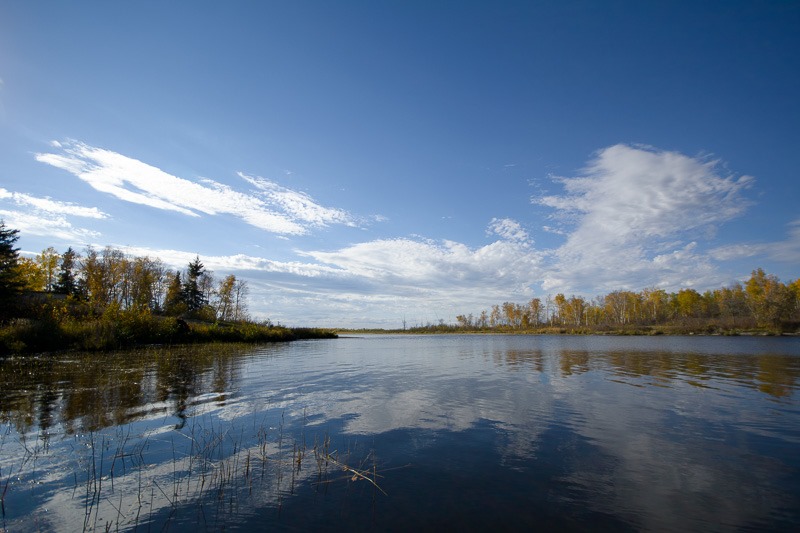 Calm sky before the storm

Before you know it, the colourful leaves have gone and we’re left with bare trees and branches. The leaves are now on the ground, providing nutrients to the next set of plants enjoying the cooler and moist times of the year. 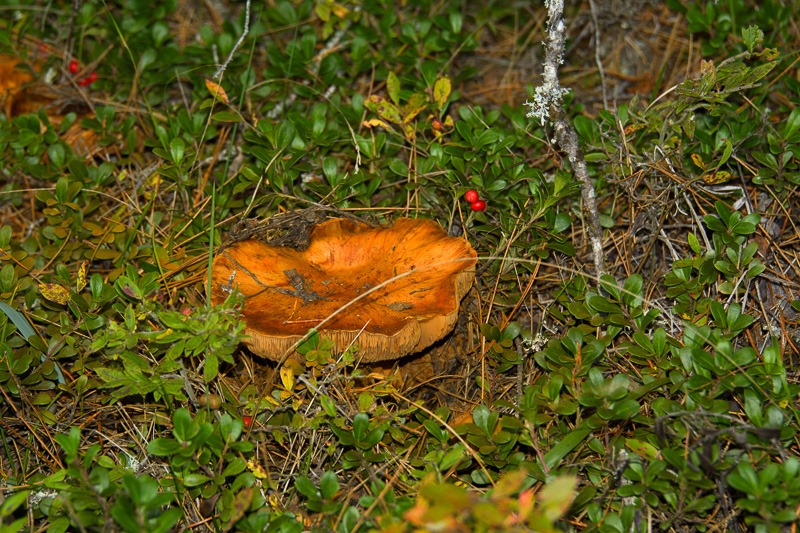 Mushrooms are everywhere, even on my lawn, where I did not expect them. While many people enjoy searching and taking mushrooms, I prefer to leave them where they are. My mushrooms come from the market or supermarket. At least they will have been vetted by a mushroom professional. My last adventure with self “harvested” mushrooms could have turned out pretty bad… Happily I insisted the local pharmacist take a look at the seemingly good shrooms. He found out that that particular one could have caused some serious inconvenience for a few days. Good thing we didn’t prepare and eat the four full bags we had taken 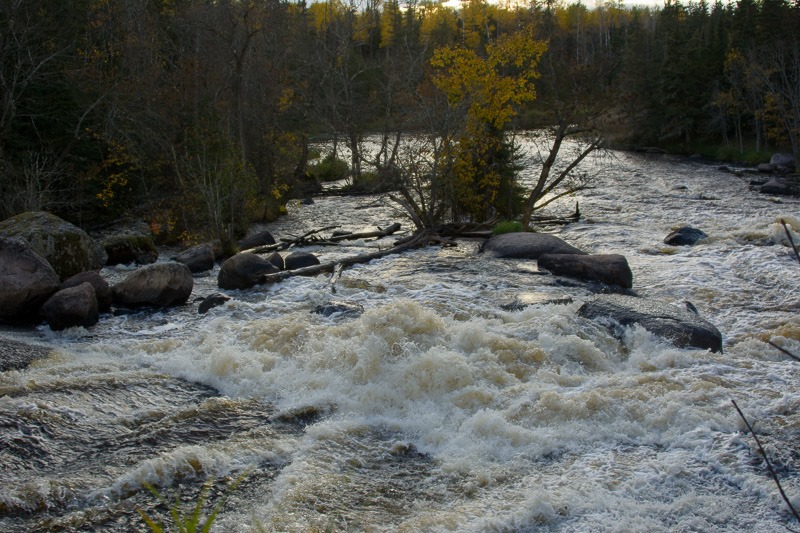 White water of the Whiteshell river

With the rains come the floods. Or at least the swollen rivers and the rapids. The Whiteshell River, which usually is a calm little stream at this point, was pretty wild now. October does that to rivers. Interesting fact is that underneath that rushing water are indigenous carvings in the stones. Water is very low at times. 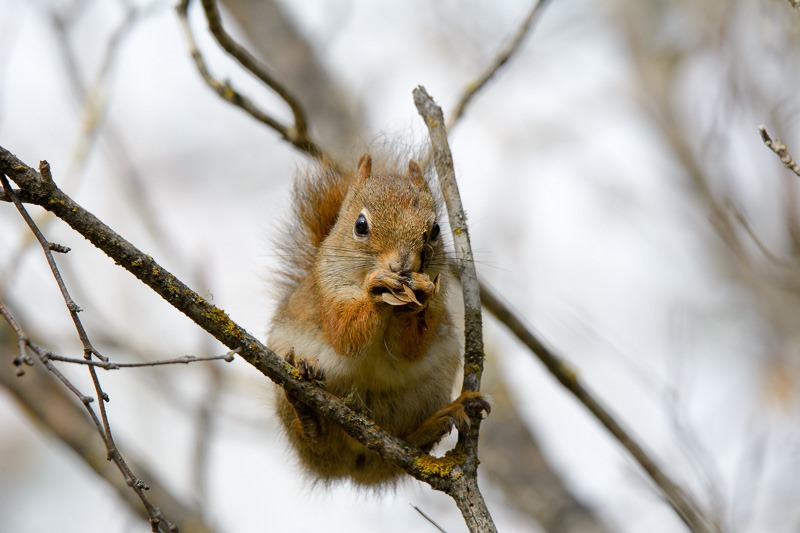 A snack for the afternoon

Stocking up for the winter is another fact of life for the critters all around. While some reserve themselves the luxury of going to sleep for the whole winter time, others will have to continue to find food and occasional shelter. This little squirrel was munching on all the seeds he could find and was not in the least fazed by our presence with the big cameras and lenses. 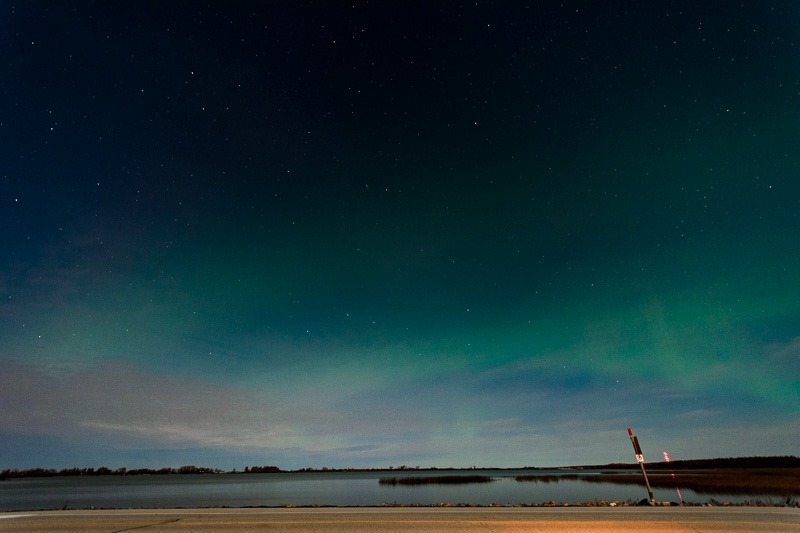 Aurora or a non show

Night time in October often is “disturbed” by Aurora Borealis. For some reason this time of the year presents more Northern Lights than other periods. When I went out for the lights that night, I thought the show was a bust. No lights to be seen and nothing in the forecast as soon as I arrived at my destination of Grand Beach. Yet I still managed to shoot a few frames, just in case. I am happy that I did. The above shot needed some adjustments to counter the effects of the full moon behind my back. Lo and behold, the Aurora showed up. Now I regret not having stayed longer to shoot more… 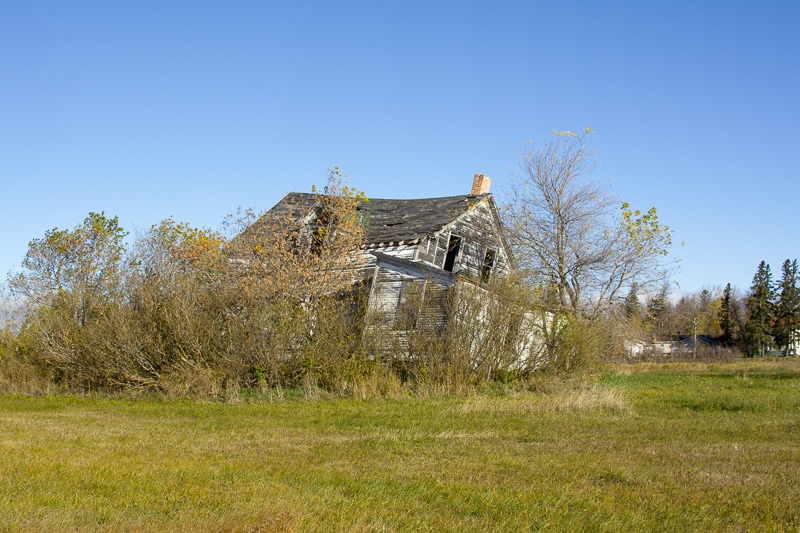 October is the month of Fall. Some houses take the “fall” part literally and shooting these abandoned structures is always an “easy” alternative to shooting wildlife. Even more when the said wildlife refuses to show itself. At least the abandoned buildings don’t run away. 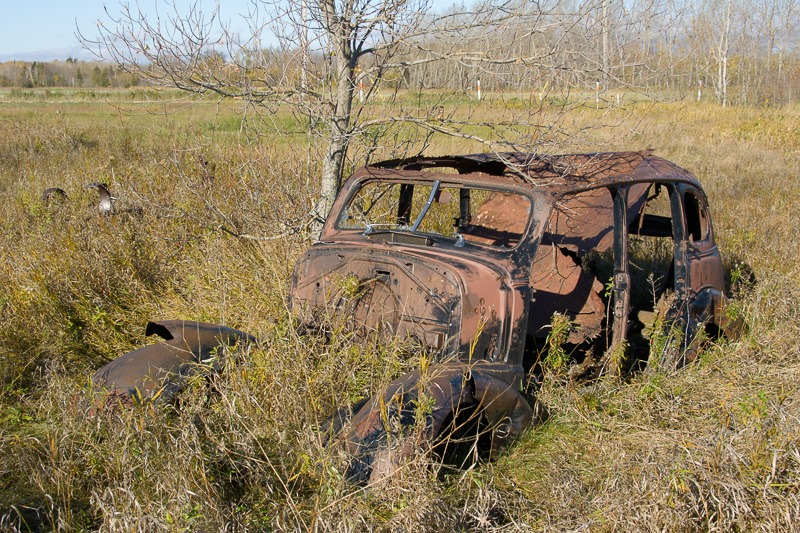 The one that got away

This getaway car seems to have been here for a long time already. It no longer deserves the name getaway car. I don’t know what brand this was, but it ain’t runnin’ anywhere anymore… 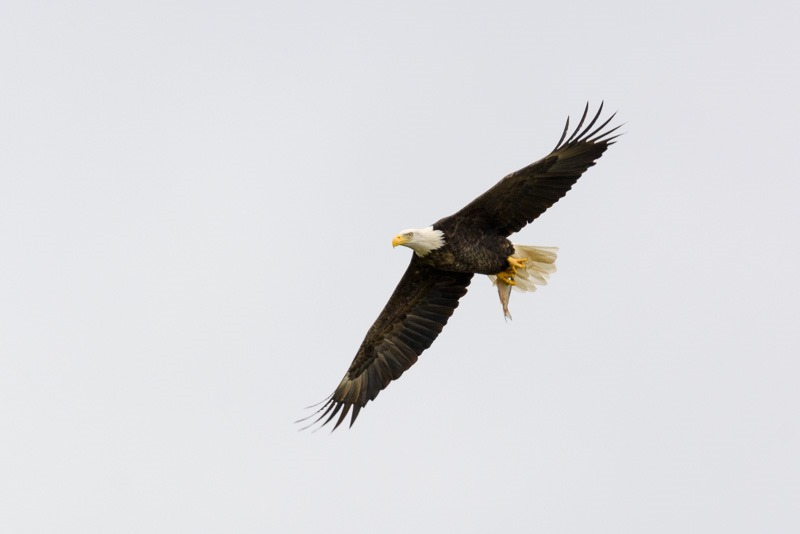 Others continue to forage and take whatever they can to feed themselves. This flying fish even caught a ride with a willing Bald Eagle. Bald Eagles will move south to the US when food will get scarce. Until then they will continue to scavenge for fish and small mammals or birds. 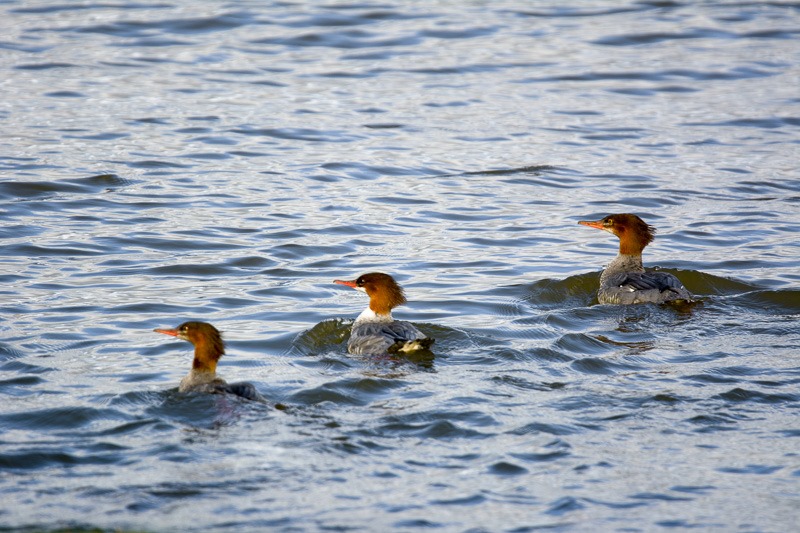 Common Mergansers are now on their way to the south as well. These guys were pretty skittish, or perhaps it was the presence of a hyperactive doggy that made them move this fast. 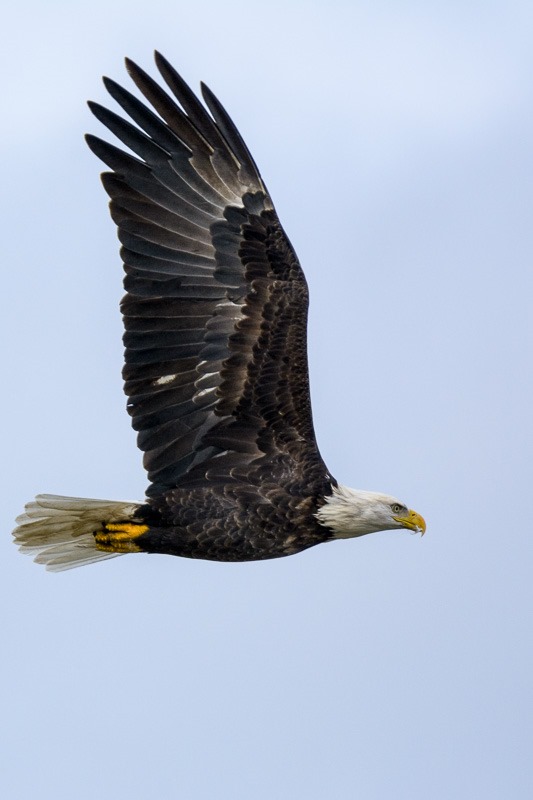 Another portrait of a Bald Eagle. The ones with the “dirty” tail feathers are usually young females. They are old enough to start a family, but have not completely outgrown their juvenile feathers yet. The eagles around Lake Winnipeg are most often looking for fish, dead or alive. They also don’t shoo away from stealing fish from other birds, like gulls for example. 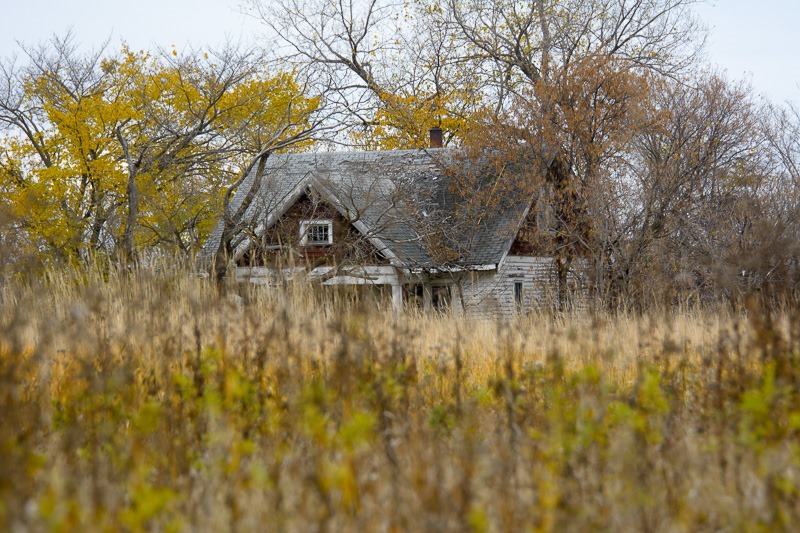 Then, lastly, a shot of a house presented as “dangerous” and “access at your own risk” together with a “no trespassing” sign. I guess that shooting it from far enough away is not that risky and not serious trespassing.

The set of images presented are mostly in chronological order and nicely show the change of summer colours to winter colours. Winter is coming, there’s no doubt about that.