Everybody does it in their lifetime. Looking for that rare piece of gold. That piece that will last you for the rest of your life. A few days ago I left for Bissett with a friend. In fact, we had in mind to go to Beresford Lake to spend some time on a campground. 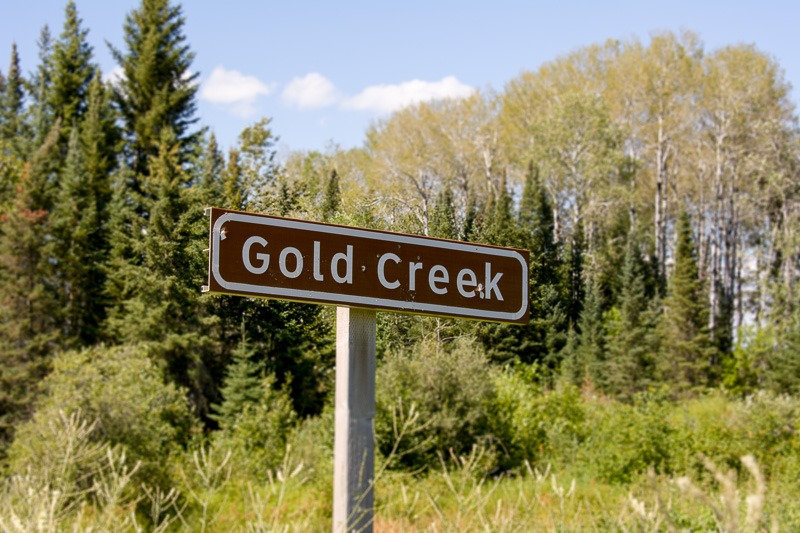 When we arrived at the “Skinny Bridge” at Lac du Bonnet, there was a line-up of over a kilometre to cross the bridge. After seeing the (non) advancement of the line in five minutes we decided to turn around and take the alternative route. It was slightly longer.

Going through Powerview and then up on highway 304 to the north entrance of Nopiming Park proved to be a bit of a detour, to say the least

. But it was our weekend after all. No schedule to follow, just make sure we got in time to the campground, that was the only idea.

The lead picture of this post shows that there must have been gold in the area. Well, to be honest, I knew that Manitoba has lots of metals in the ground like nickel and tantalum, but gold? I didn’t believe that. After a quick drink from the still fresh water we had in the car we continued to the first city we could find.

The city of Bissett.

Ok, the town of Bissett.

When we arrived, it became clear why I had never heard of Bissett before. The place has currently about 125 souls living there. About three times more in summer when the cabins at the lake are filled. The biggest building in town was this: 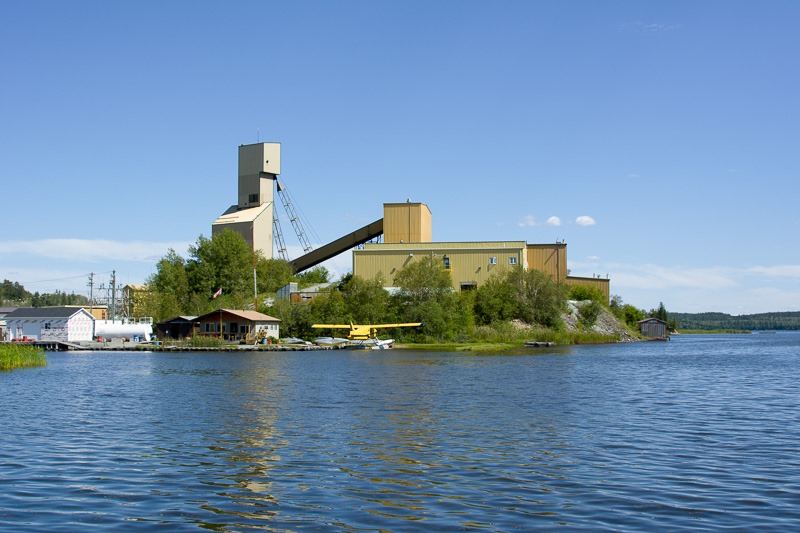 From far away I thought it was a grain elevator, but there is no grain around for miles and miles. Why build an elevator for it then? Coming a bit closer, we saw the signs that blasting was possible; the place was a mine. So we asked some people what they were mining. “Gold”, was the answer. Still I didn’t believe it and asked some more people. The answer remained the same.

The people were right. Of course they were. Everybody in town has something to do with this mine and makes his or her living from it. On the parking lot paved with the tailings of the mine I even found a rock that has probably some gold still on it. But not enough to last me for the rest of my life.

The mine of Bissett has been active since the discovery of gold in 1911 and was closed in 1983, when gold prices were not high enough to warrant the investment. In the 1989 the mine was sold and reopened to take on more mining. Gold prices had been going up again and mining became lucrative once more. It currently belongs to Rea Gold. 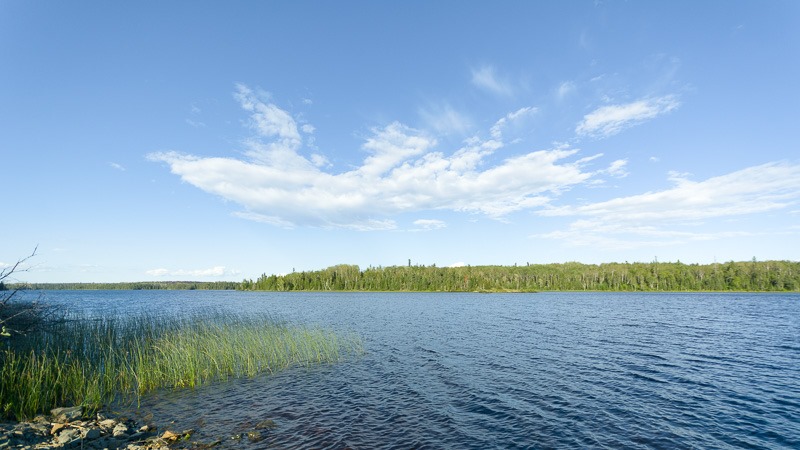 But we still had a long way to go before arriving at Beresford Lake. When we arrived at the campground we took the last free spot. To my surprise the area was full of people. And the campground without running water or electricity. For the electricity I had no issues, as the car could provide it if necessary. The water on the other hand was a different question. I didn’t see myself boiling the water of the lake to make coffee. We decided to ration our water instead. After all, it was only for one night.

Beresford Lake is all that is left of the town of Beresford. Another gold mining town from the 1930’s and early 1940’s. Once the mine was closed for lack of gold, the town simply disappeared from the face of the earth. Only one building remains of this period. 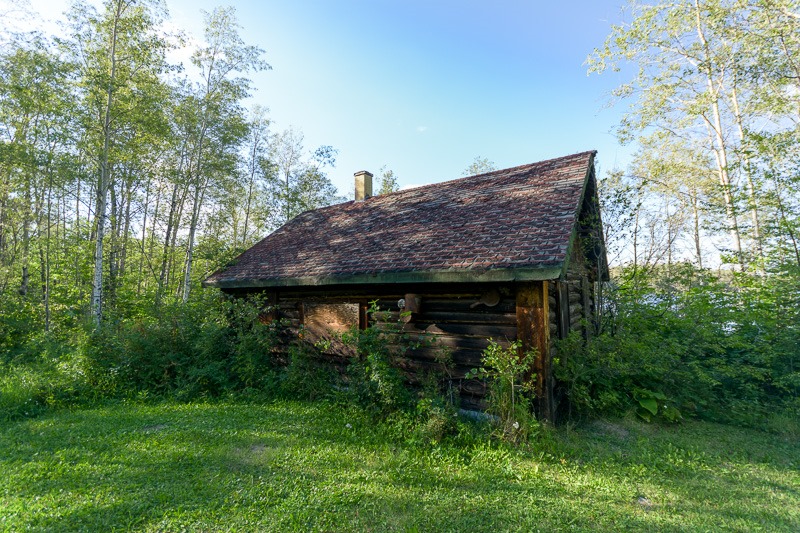 John Jack “Trapper” Johnson lived in this cabin until the mid 1960’s. Photographs of him and his dog from 1964 show that at that time the cabin was still used. Trapper Johnson operated his trap lines in the 1020’s and 1930’s, getting the best of two worlds. He lived in the town site of Beresford when it was booming and lived near his trap lines for the rest of the time. Today this is the last structure still standing from that era. 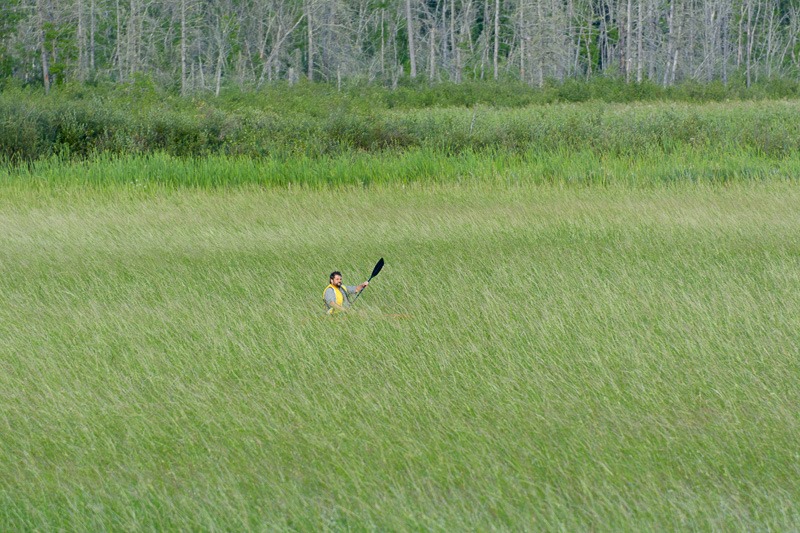 Then it was time to do a little exploring around the town, or what was left of it, to see if there were no other gold mines to be found. Lo and behold, we found another source of income in the area. Still a bit green, but good for a lot of money when the time comes to harvest the wild rice on Long Lake. This guy seems to be practicing his boating skills on land, but he is actually in the water. The wild Manitoba rice is all around him. 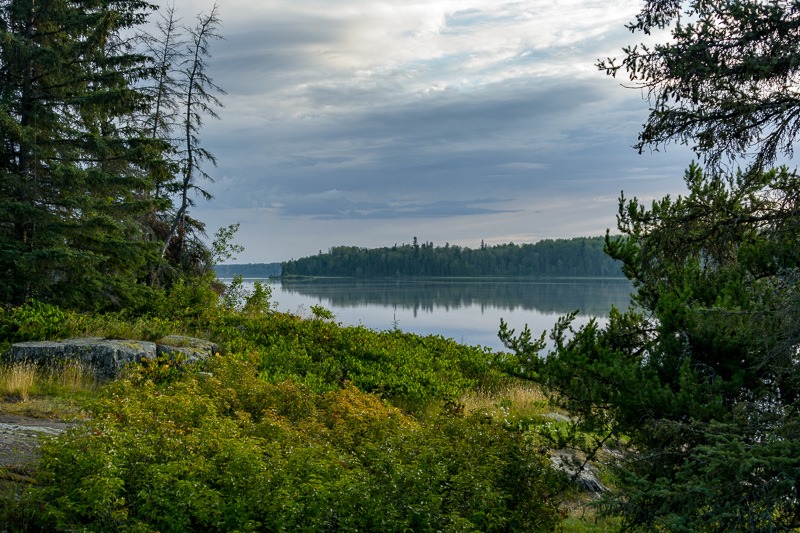 Time to return to the camp site and make some dinner. Beresford Lake revealed its own gold in the golden hour of the day. At first I thought that that gold was passing us by, but the sun decided to give us a glimpse anyway. 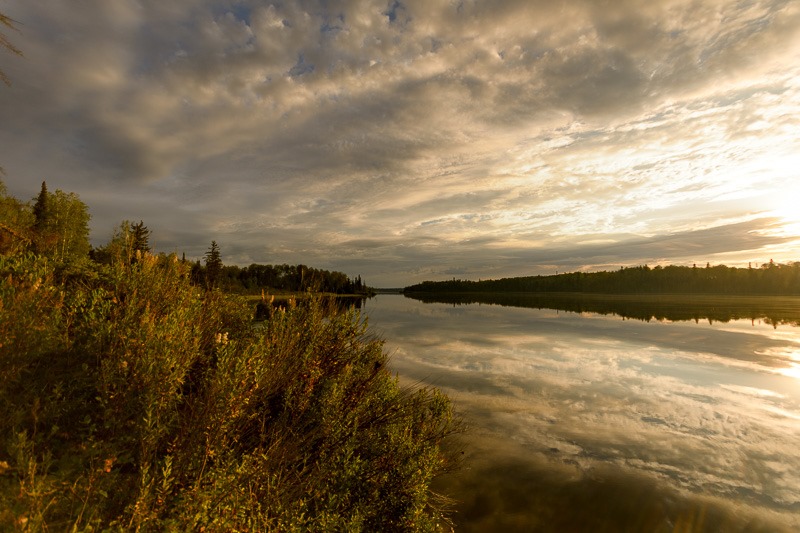 The real gold of Beresford Lake

The golden hour at its best. A mirror flat lake with golden clouds drifting above it. What more can you desire? Well, I could have wished for some bug spray here. Once the sun was completely down, the hum of mosquitoes started to become louder and louder. As if they were waiting to get to us.

Time to return to the tent and enjoy dinner and cowboy TV.

The following morning provided us with an even more stunning view of the lake. 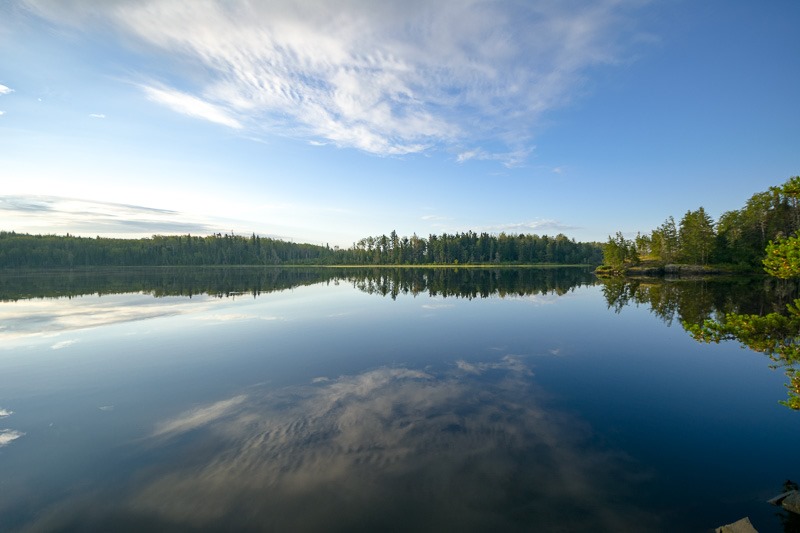 A pure flat lake and really nothing to disturb the surface. This was the gold I could hope for. The metal is only a lure to get people into the area. The real beauty is what you cannot take home with you. The gold of Beresford Lake. Definitely a place where I will go back to, one day. The drive is a bit lengthy, but well worth it.

So if you have a tank of gas and don’t know what to do, go searching for gold at the north end of Nopiming Park. You will not be disappointed.