Provincial Parks tend to take up a lot of space, it seems. At least here in Manitoba. Some of those parks take up the entire surface of my original country of The Netherlands. And we still call them just Provincial Parks. Last winter I went to a small park, only a few acres big. In Seven Sisters Falls. 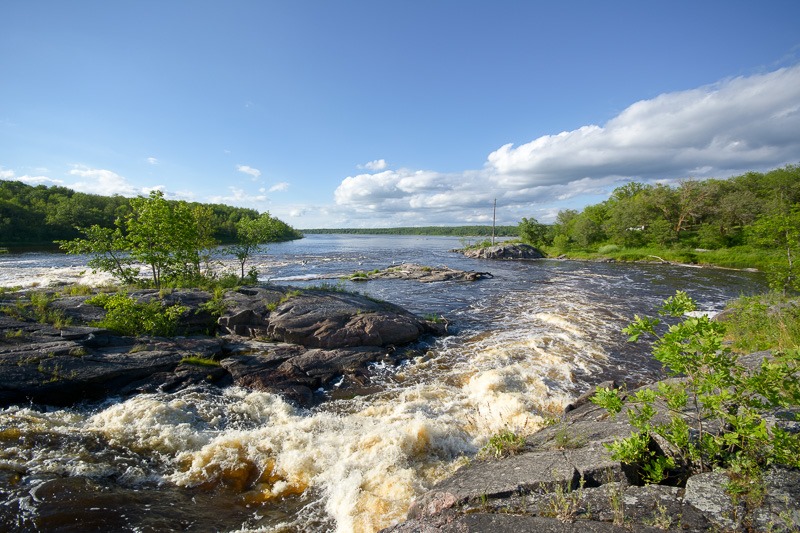 The Whitemouth Provincial Park is tucked away behind a lot of trees and a fairly long unpaved road. Last winter I went there with a friend in his truck and we had no issues getting there. Later I tried it again with my own car, also a 4x4 but didn’t make it through the 12 inches of freshly fallen snow.

The goal then was to show my wife the near magical place this little park presents. With the Whitemouth River steaming from the water barely warmer than the surrounding air, the place takes on a mystical atmosphere. 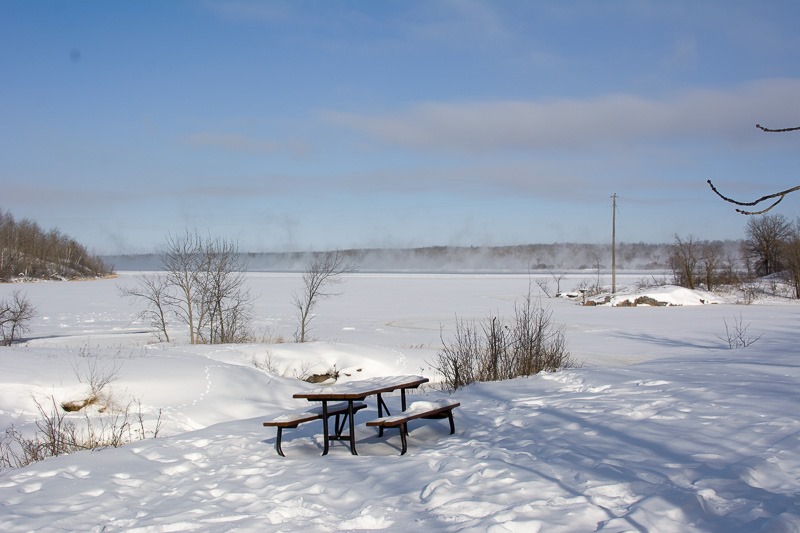 Mist on the water

The ice seems thick enough to cross on foot, but with the fast flowing water beneath it, I wouldn’t take the chance. Some animals do not seem to have this reserve, though. The lead picture of this post and the above picture were taken roughly from the same vantage point. Just check that pesky hydro pole in the middle. 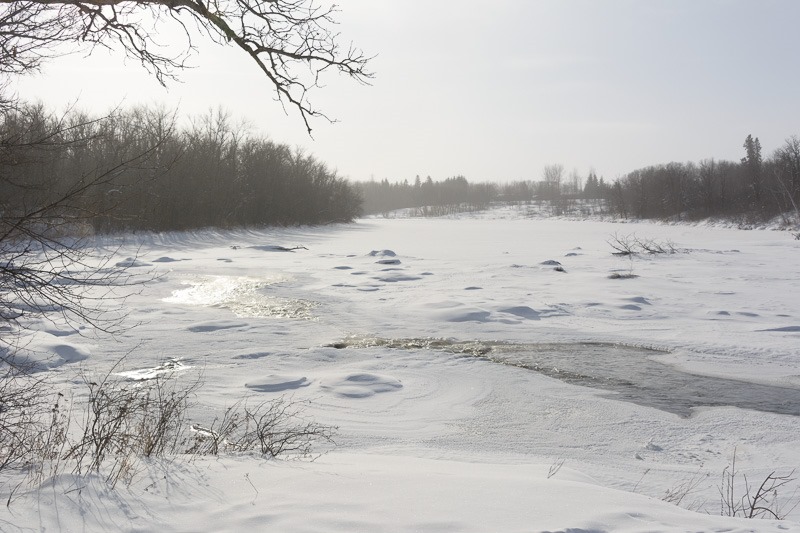 Looking the other way, into the morning sun, another misty view of the waters in winter. As you can see, the ice is there, but I put no trust in its strength

. The same view from last weekend presents a much friendlier environment. 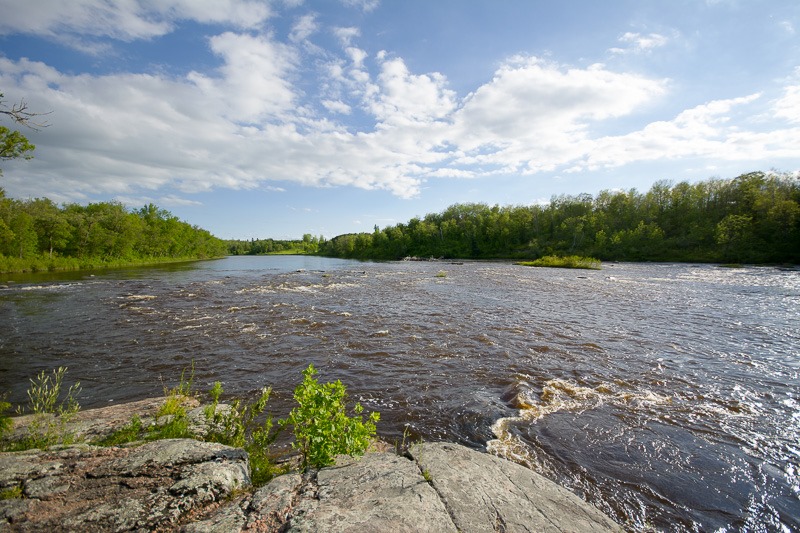 The start of the rapids

Although there is no ice, I still wouldn’t want to be in the water. I know I start to sound like a serious curmudgeon, but I do like to stay alive. Between the two sets of pictures is the following: 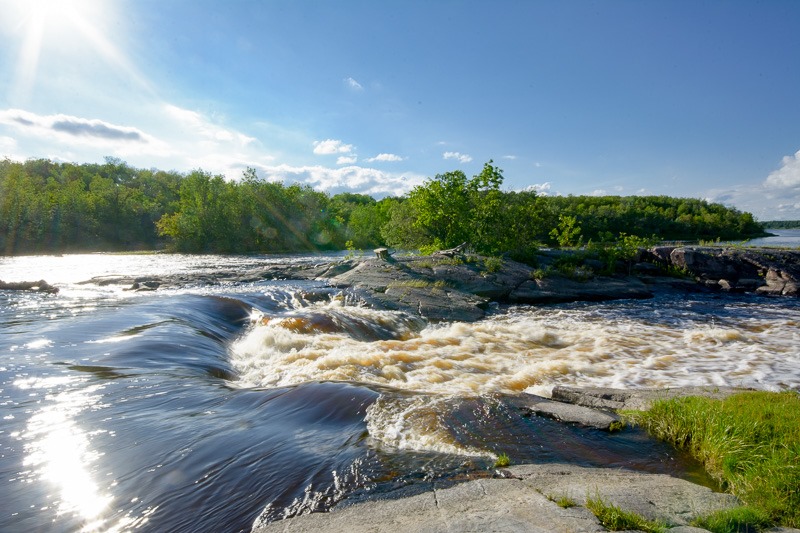 Water rushing over and between rock at a tremendous speed. Perhaps experienced kayakers would make no fuss about this one, but to me it looks like a sure way to the definitive end of my adventures. I’ll stay safe for now. 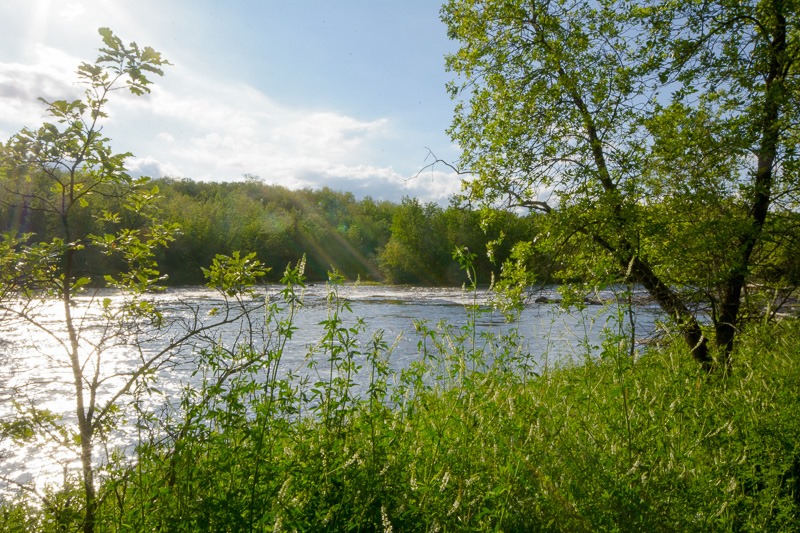 I thought that a small place like this would not present me many angles for shooting anything, but I was wrong. All these pictures have been taken at roughly the same time, albeit with a few months in between. Each set was taken within a few minutes. Even more so with the winter pictures as the moist in the air made for a bitter cold morning 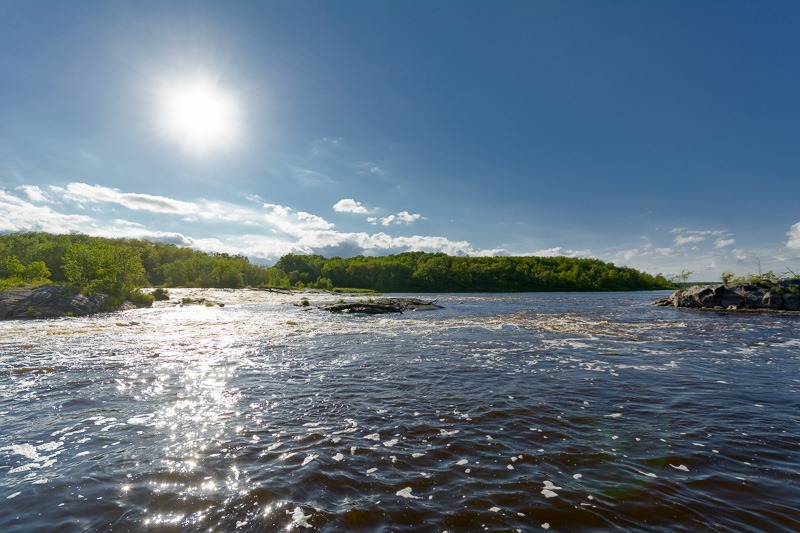 This time, however, the weather was very nice. Bright sun above and on the water. No polarizing filter for me for these shots either. Not that I don’t like those filters, but I simply don’t possess one. All of the pictures are straight out of the camera, apart from a little horizon straightening. The bright sun was toned down a bit but still remains blown out. 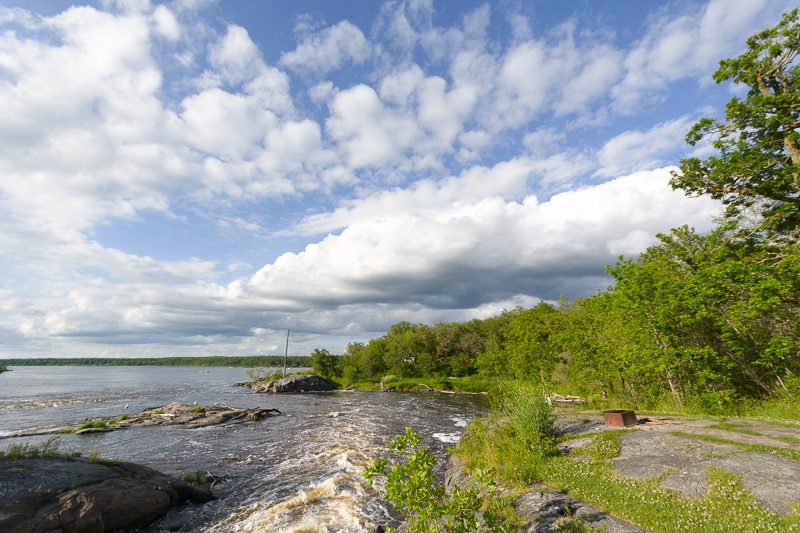 I keep coming back to the weather, in summer or in winter, it’s all the same. The saying goes that  if you don’t like the weather in Manitoba, then wait five minutes and things will be different. So I waited five minutes. Then five more. Then some serious looking clouds started to show. Already I was thinking about packing up, when I saw some birds, far away in the water.American White Pelicans, huddled together in order to hunt for a meal. You can see them just off the rocks in the water. 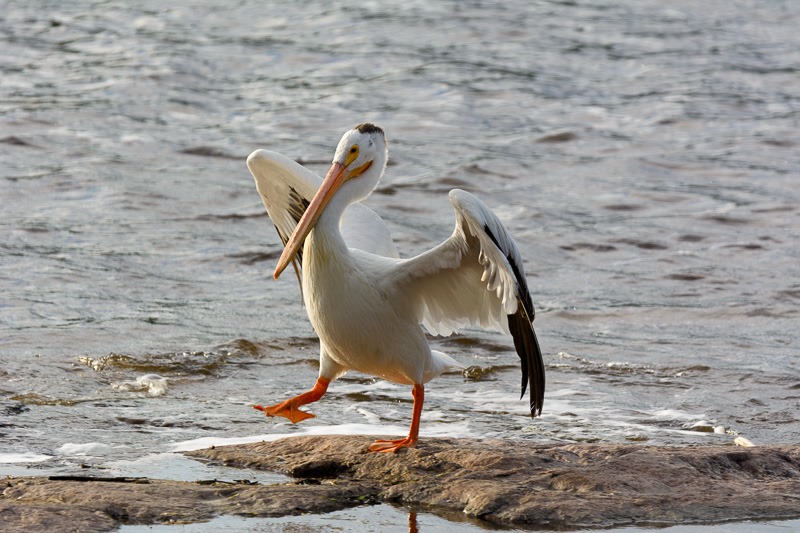 So it was time to change lenses and get a little closer. Pelicans can be shot very easily, be they in the water or in flight. They are big birds and don’t make sudden moves. Ideal for practicing BIF (Birds In Flight) shots with your new camera and lens. This one had just been cleaning himself and was drying his feathers in the sun. Not a care in the world… 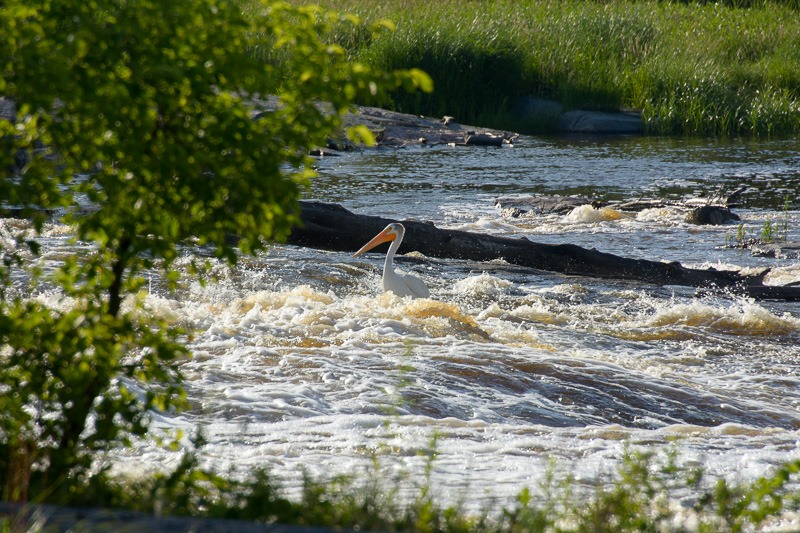 Then I spotted one, fishing all by himself (or herself) in the midst of the fast flowing water and being successful at that as well. Then I decided to do something a bit different… 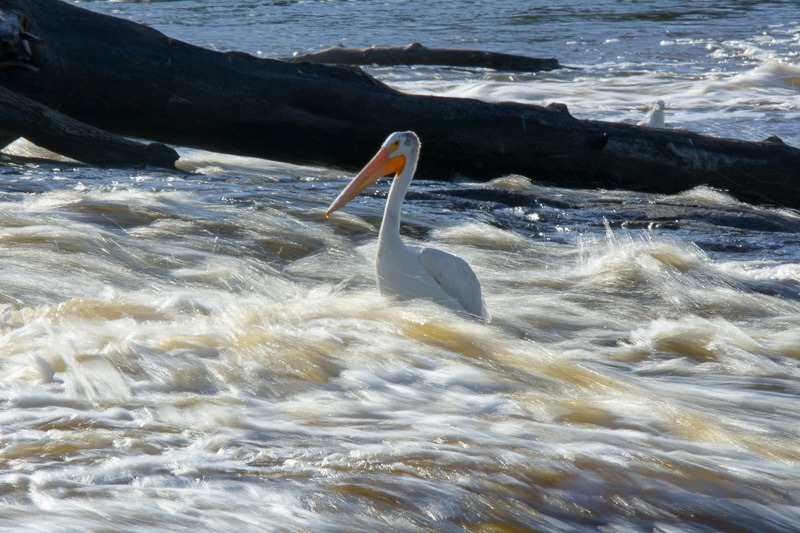 Concentrated on the hunt

I tried a way longer shutter speed like 1/15th of a second. That had the effect of making the water “silky smooth”. The Pelican didn’t move as it was concentrated on fishing, making the water flow seemingly even faster.

Whitemouth Provincial Park. If you ever go on highway 307 through Seven Sisters Falls, a town created for the nearby Hydro Dam, then make a detour and check out this tucked away pearl of parks. It’s worth it.