The Canadian Snowbirds. The elite of the fighter pilots. The ones that are allowed to do acrobatics in their planes where normal jet fighters are supposed to go by the book. When we speak of the Snowbirds, everyone is in awe. People watching a show with the Snowbirds invariably will fire up the Top Gun theme in their cars. 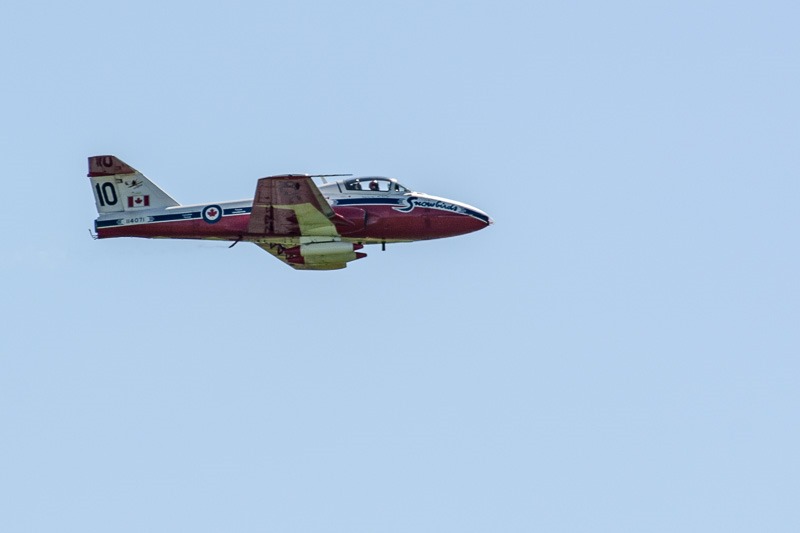 Twenty years after the movie it is still going strong as a theme… The Canadian Forces Snowbirds (431 Air Demonstration Squadron) is a Canadian icon comprised of serving members of the Canadian Armed Forces.

In other words, these are pilots in active duty, not a bunch of acrobats. They are ready to fly overseas and serve in any country in the world. Now I am usually not a big fan of military display of power, but the Snowbirds are definitely an exception. The show they put up was breathtaking, even more if you can imagine what it is like if they have to serve in real combat situations. I guess the enemy of the moment will have little chance of survival. 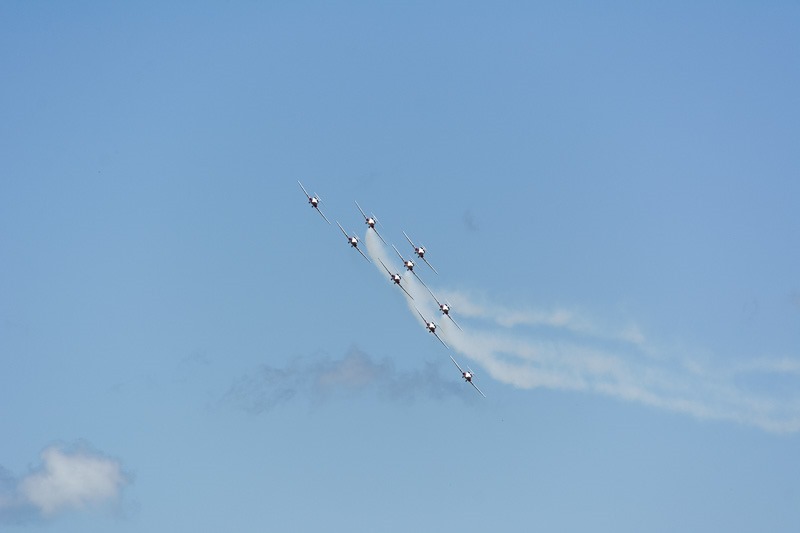 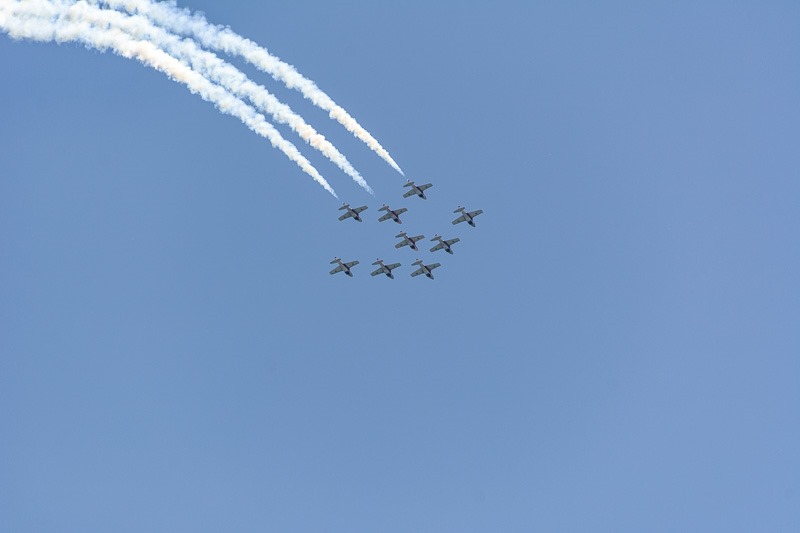 The fighter planes in this airshow were not armed in any kind, other than with smoke canisters. Flying in formation is one of the strong points of these fighters. Another frightening aspect is that they can fly in near silence. When they took off from the airstrip in Portage la Prairie a few weeks ago, I nearly missed them. They hardly made any sound. Then they disappeared for the next ten minutes. 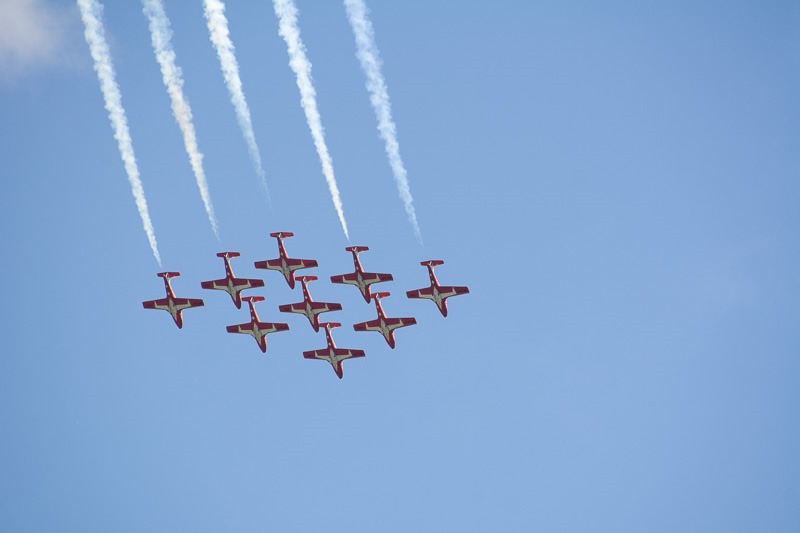 I thought they had taken off for the day and returned to their home base in Moose Jaw, Sask. But then they came back in force, all pilots in formation. Now you might say that you can’t photograph planes from the top when standing on the ground. The Snowbirds must have thought of that too and obliged with the following figure: 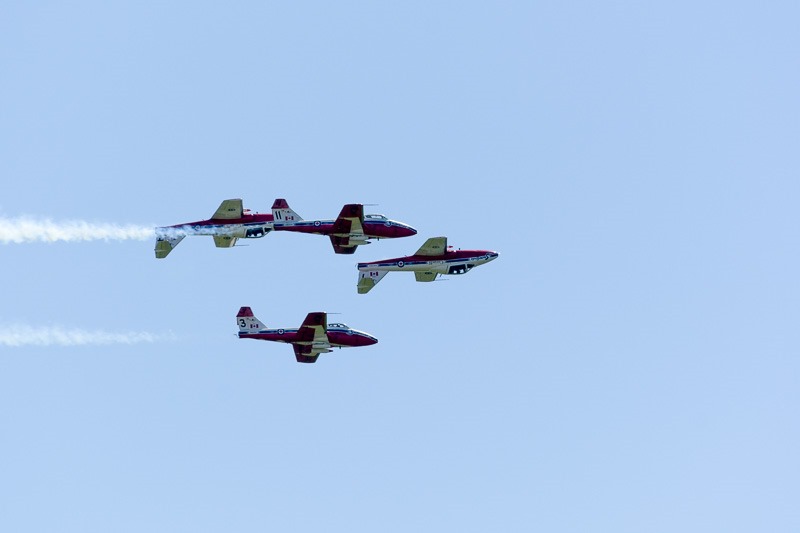 I was positioned at the end of the runway, outside of the official public viewpoint and direction. Some of the figures must have looked quite different from their point of view. But beggars can’t be choosers and I shot whatever they provided at my end. 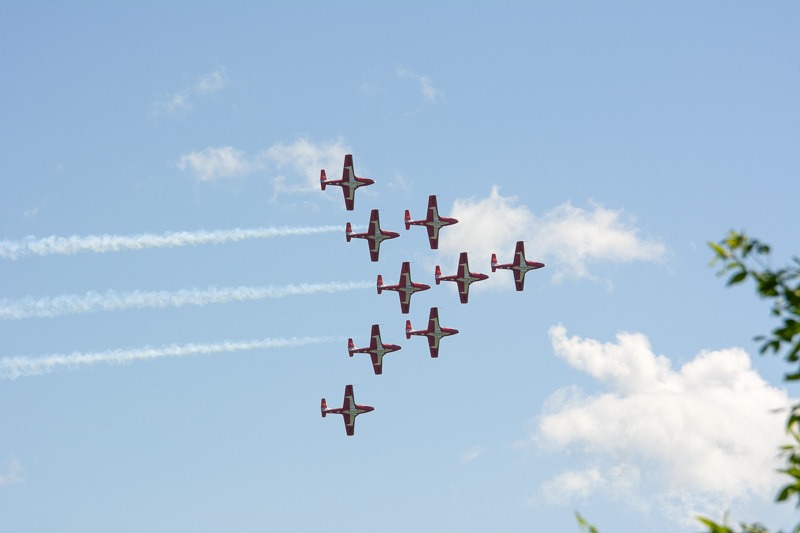 Low above the ground

They also didn’t hesitate to show off their skills low above the ground. 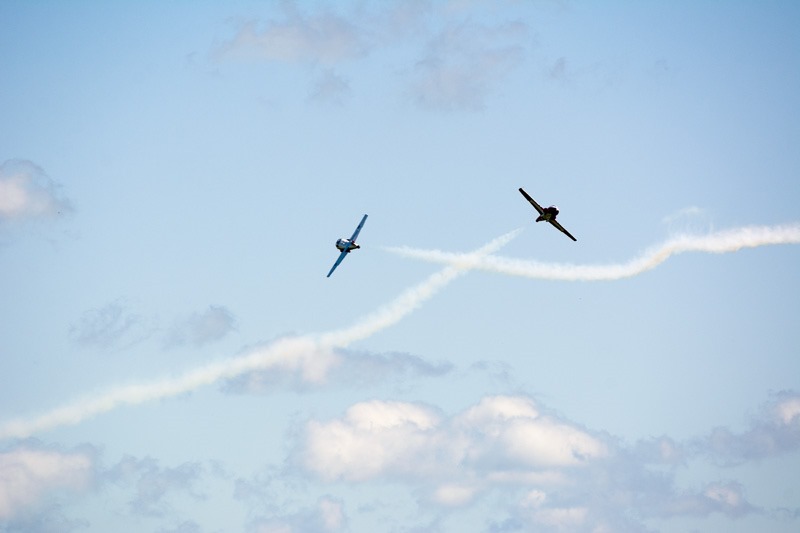 Part of their routine also apparently included playing chicken. From the public viewpoint, those planes were on a complete collision course, but form my angle, there was enough space between them to avoid each other without a problem. Nevertheless, doing this a mere 100 feet above the ground is still a very frightening prospect to me. One tiny mistake and the plane and pilot will be feeding worms. I have witnessed a few of those accidents when I still lived with my parents in the city of Leeuwarden, Holland. Several F-16’s missed the runway over the years and invariably I went to look as soon as the news came out. A few hours later, tarps would have been deployed around the site to hide the scene from public view. 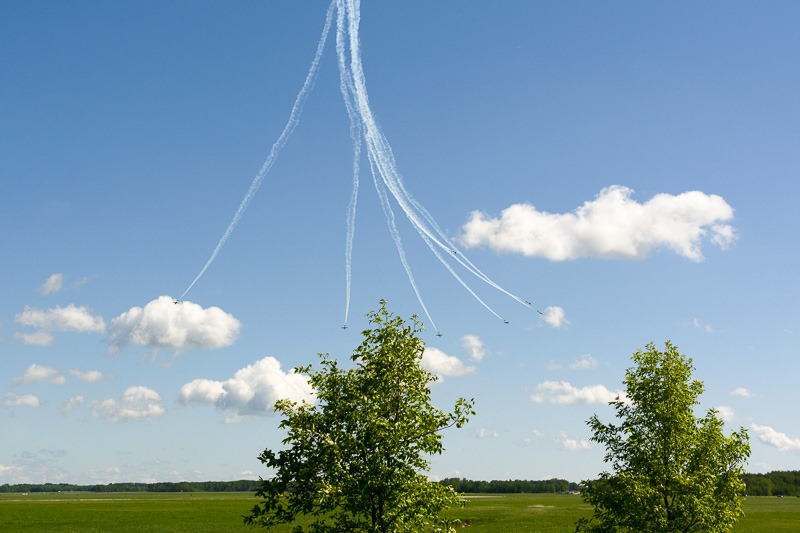 Falling out of the sky

The Snowbirds, however, all stayed in the sky as expected. Some figures clearly were meant to suggest differently

. Coming all from high as one plane and then breaking up in different directions like in the above picture must put quite some strain on the pilots’ bodies. 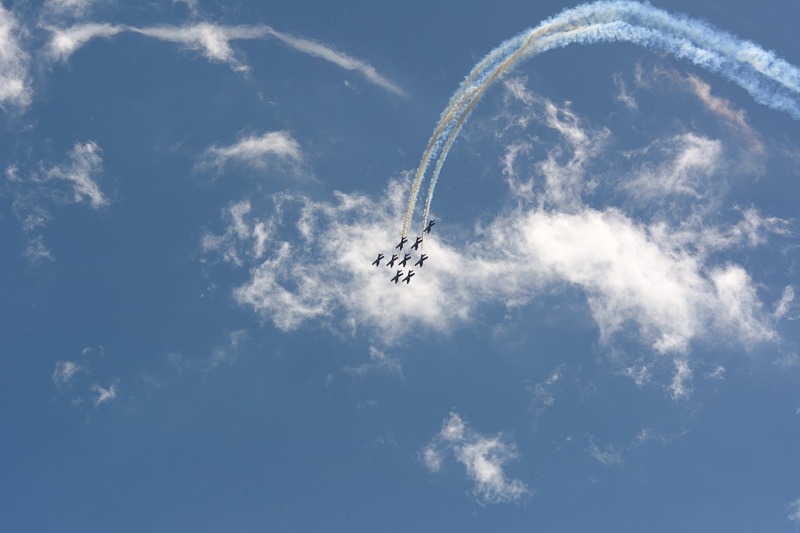 Then again, for these guys, a few G’s more or less won’t make much difference. The above figure though would add a lot of those G’s…

The organisation of the airshow had left a bit to be desired. There had been about five times as many cars and people as they had expected. While I had been fairly lucky with my waiting time before the show, I had no intention of mixing in with all those cars when the show was over. I decided to leave a few minutes before the end. I must have missed the final two combinations and figures, but that was all.

All in all a beautiful show, one I will revisit whenever they decide to come within my range again.