Much like an Indian Summer when summer is already over, Strawberry Spring is a false spring. Last week has seen nicely elevated temperatures, high enough to melt away almost all of the snow and ice of the winter. At the climax of this Strawberry Spring was a night filled with fog. 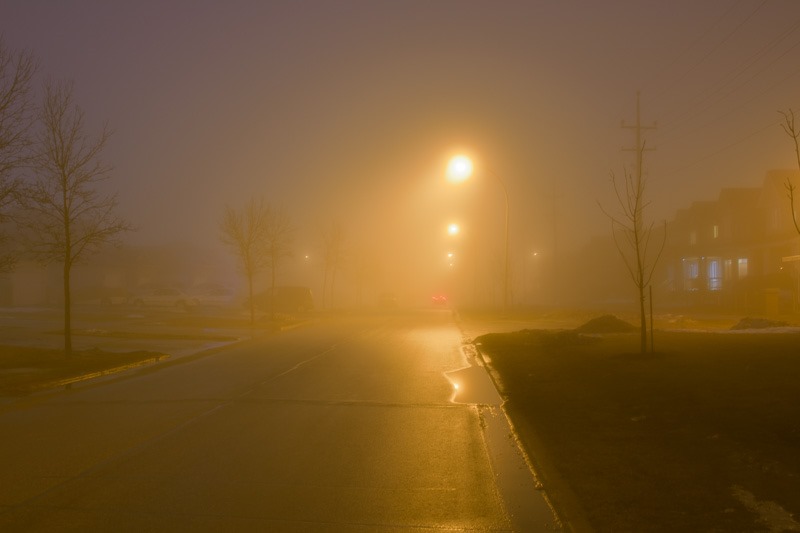 That’s something that simply has to be shot, in any way possible. Night and fog have always been a favourite of mine. So let’s step out for a minute or two, Something is going to happen…

The first shot of this post was taken in front of my house. A few steps outside and it was there. More fog was about to roll in; the tripod was a welcome travel companion. Anyway, who goes out shooting in the night without a tripod? Not me. 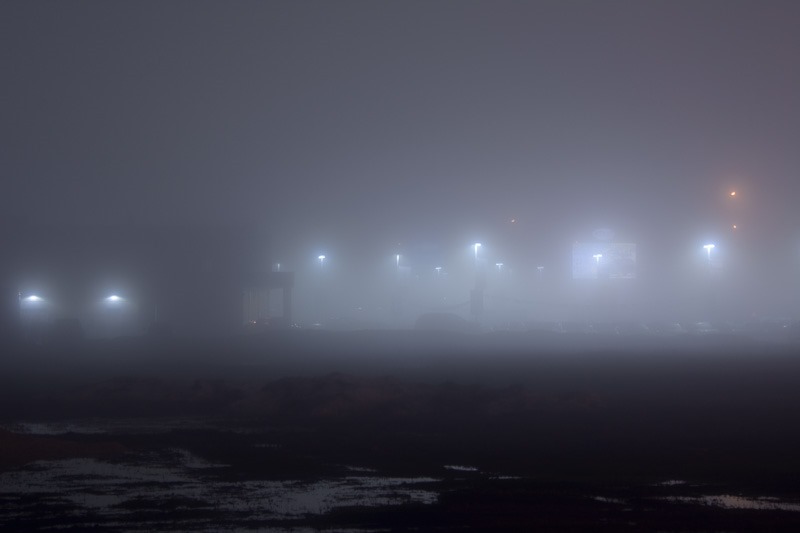 The car dealerships close by are using the new LED high intensity lights instead of the usual halogen lights. The new lights are just as bright and use about 15% of the energy. Now that’s a deal maker, right? For the sake of photography, I’m not sure that these lights are to be the future. While they seem white, they have a serious colour cast towards the violet and blue tints. Soon we will see a new White Balance setting on new cameras specifically for these lights. Just as we have them for tungsten and fluorescent tubes. 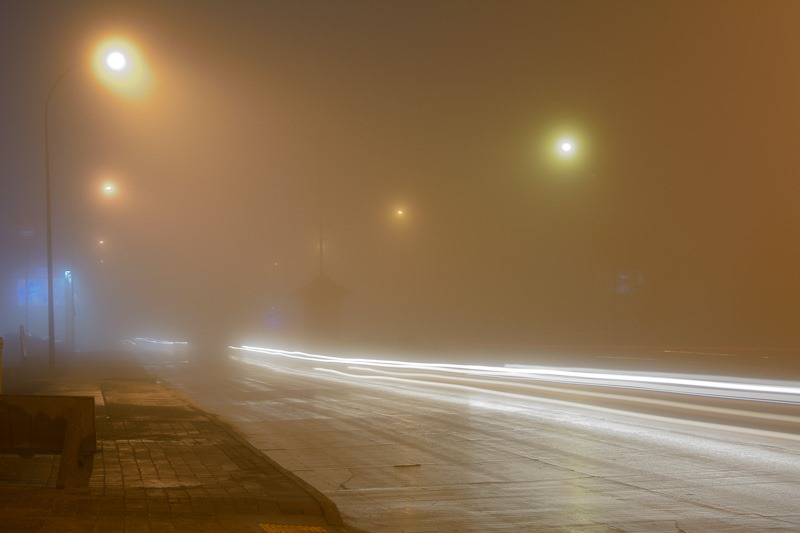 Walking along a busy street, making sure not to get splashed with water from the melting snow, light trails from cars are an easy target. Light trails also easily show the dips in the street. The foggy night added to the mystery of what could not be seen. 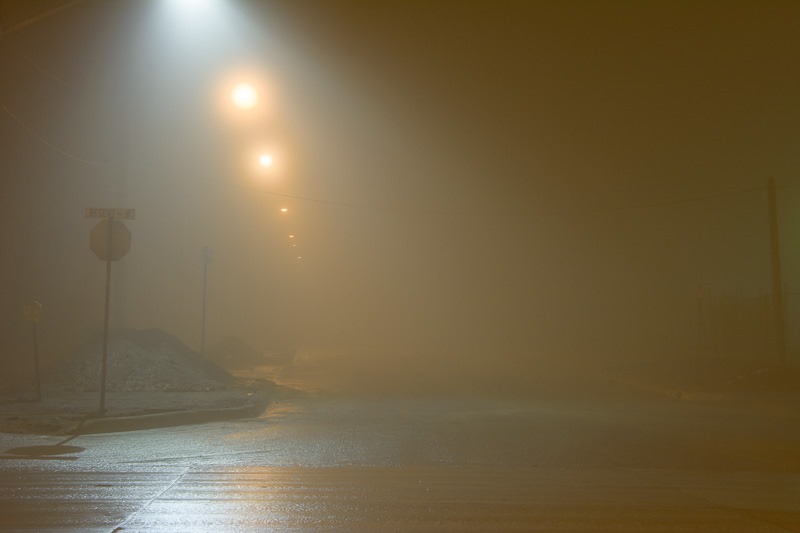 Streets without traffic but with street lights can show an endless possibility for adventure, if only you have the nerve to wander off into that fog. The above street is off of Regent Avenue, currently close to through traffic. I am not sure what lurks in the fog at the end of that street though. Who wants to find out? 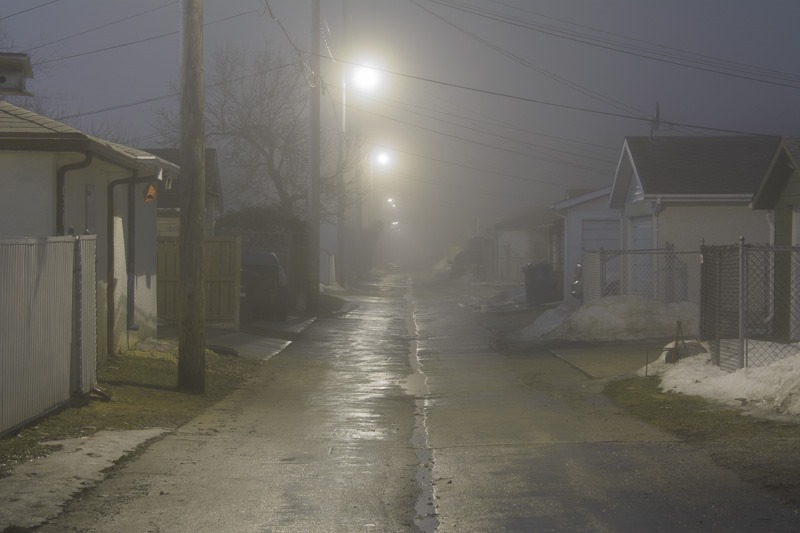 Then it was time to get away from the big streets with all the traffic trying to soak me. Little streets and back lanes provided for other, equally interesting views. While normally I don’t shoot back lanes with garbage cans, parked or broken cars, when the fog rolls in, these places are game for me. The sodium lights really cast a heavy colour on the scene, so for this one I decided to adjust the white balance of the picture to even it out. The result is quite interesting and, perhaps, even a little closer to the truth. 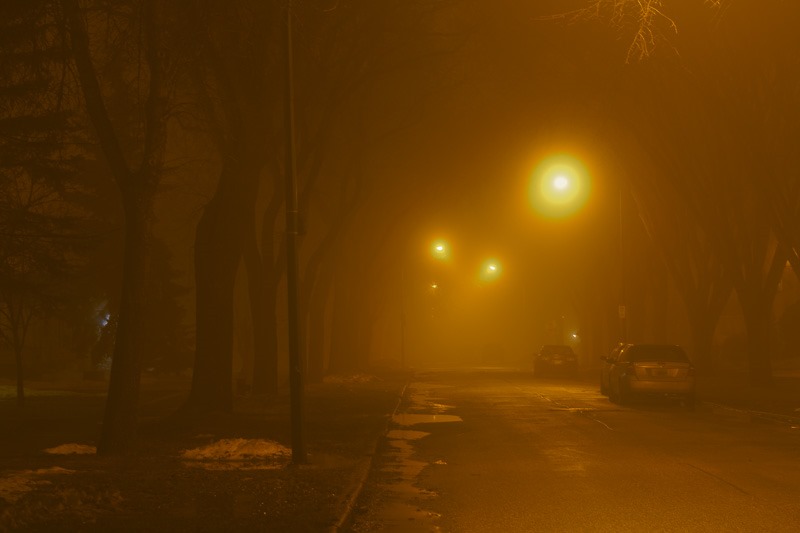 When you walk in the streets, though, you have the impression that the colour is normal and perhaps only slightly tinted. That is because the human eye can adjust to any colour cast within minutes. If you are walking in a place lit only in blue light, after a while the scene becomes normal again. Until you go outside, where the scene then turns into yellow overload. A few minutes later, your eyes will have adjusted and everything is back to normal. 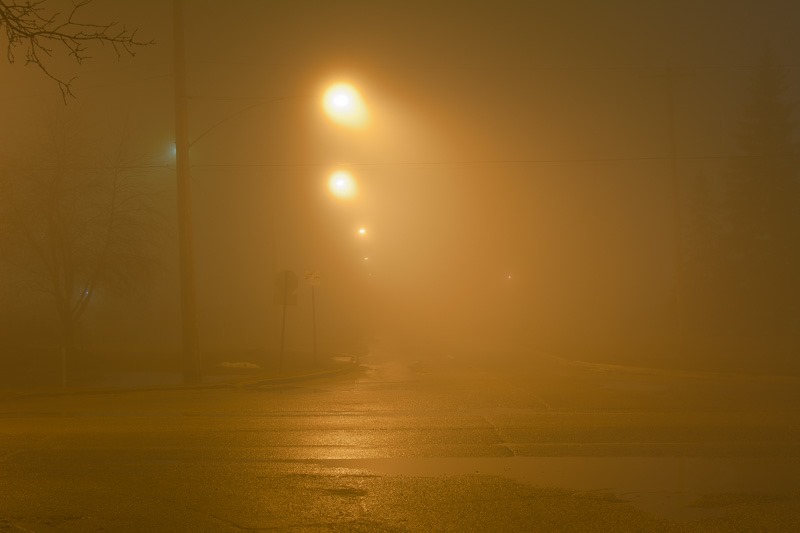 A camera, however, records what is there and the resulting pictures show the real colour of the light. The fact that we see those images in combination with normal light, the colour becomes even more prevalent. It’s easy to remove nowadays, using digital techniques. 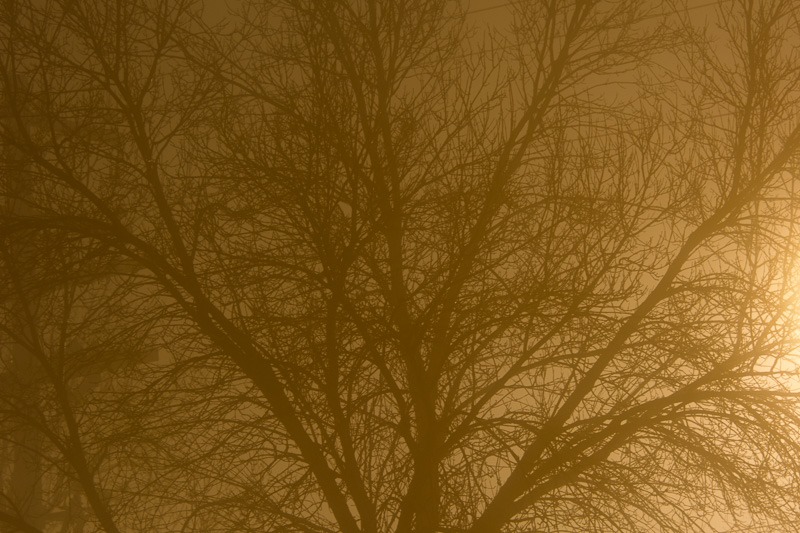 For myself, I quite like the orange glow of the sodium lights. It’s like a risk free diet of sodium.

So what about that Strawberry Spring? The term was coined by the master of horror, Stephen King somewhere in 1968. The story about a serial killer in the mist. The story teller seems to be the killer, but he is never identified as such. The same goes for me, when a Strawberry Spring presents itself, I am outdoors, shooting and killing time. However I am easily identified, unlike the character in the story.

Next time there is fog around, I’ll be outside again. In the mean time, this false spring has been taken over by Old Man Winter and snow again covers everything in view.