Shots in the dark

Winter is gone. The snow has started to melt, the puddles and potholes are back to haunt our footwear and our cars. With the start of spring also comes more daylight time, whether we saved it or not, it will be here. 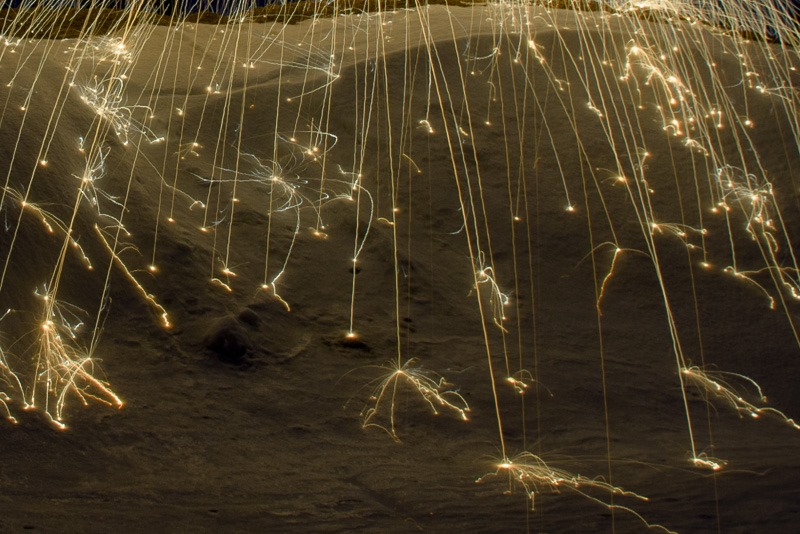 This is the time to remember what we shot during those dark days of the year. As usual I find that many of my winter shots have been night or dusk shots. Forget about the dawn shots, ok?

The lead picture here was not an outburst of extraterrestrial origin, merely a result of spinning steel wool creating sparks. The evening we did this with the Manitoba Foto Friends it was bitter cold and windy. You see, I can resist cold and wind, but am not a morning person 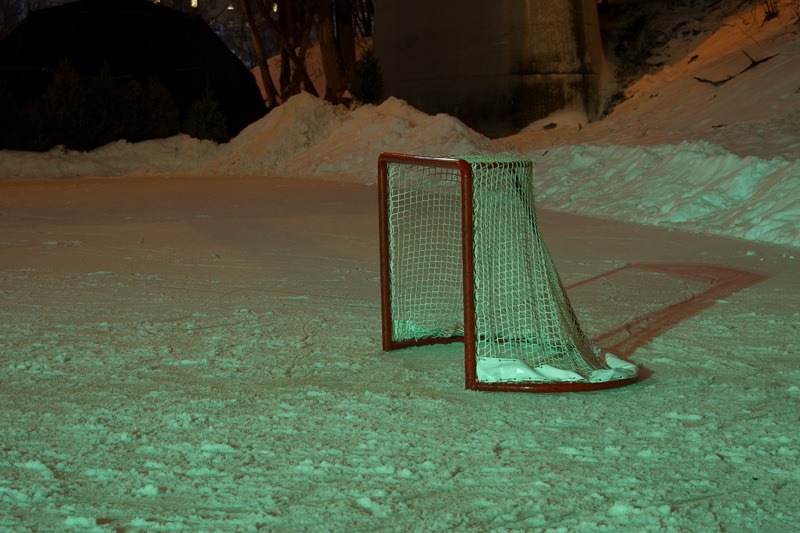 Are you lonesome, tonight?

The Forks in Winnipeg on a different evening was nearly deserted. A hockey goal was waiting for the players to show up. That evening they decided that outside was not the place to be. The greenish light was not from any Aurora Borealis, as you might imagine. It was light from LED projectors nearby. 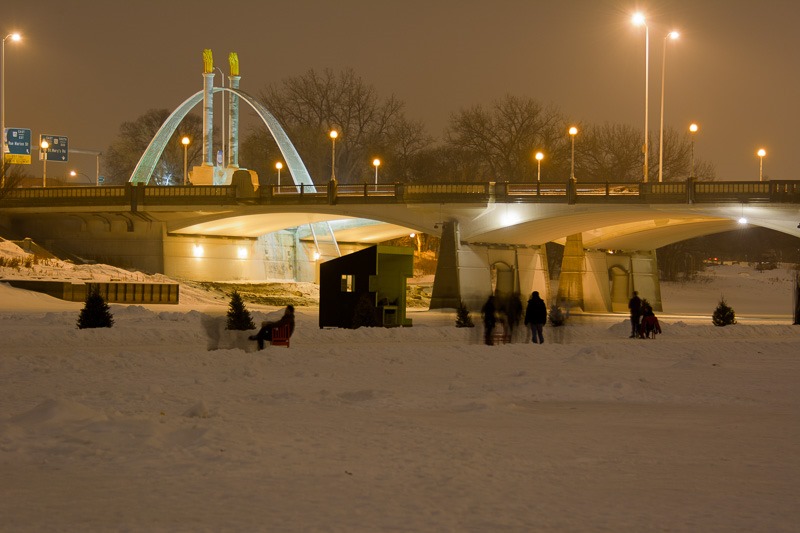 The Red River in the heart of winter is always an attraction for people. Walking on water is a common activity here in Winnipeg during winter time. The Main Street Bridge in a bit of distance fog was a nice shot for this year. Underfoot of the people near the bridge is about 4 feet (1m20) of ice. Thick enough to hold a truck. Now that the ice is melting, the fast flowing water underneath has already taken its toll. The river is now closed to the public. 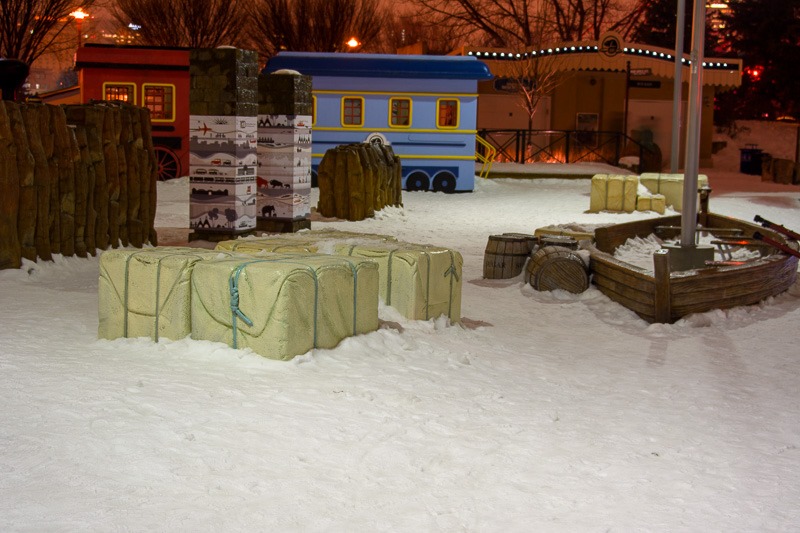 Ready to be shipped

Near the Forks Marketplace, there is a large playground for kids of all ages. This old harbour-like setup was reminiscent of the golden days of the Hudson’s Bay Company. The company had a big hand in the formation of the province of Manitoba. 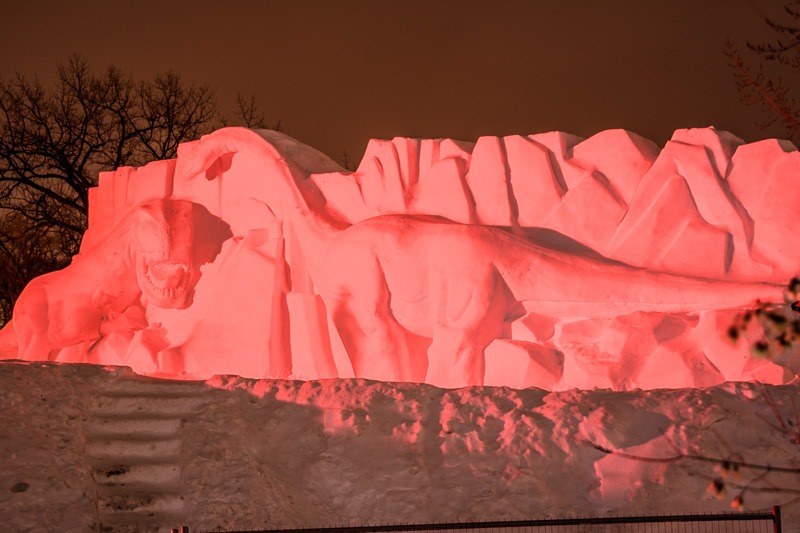 Then I turned around, to find more subjects to shoot. I felt that something was staring at my back and I was right. These dinosaurs had decided to come back to life, albeit in an icy, snowy form. They didn’t move around too much, shooting them was easy. 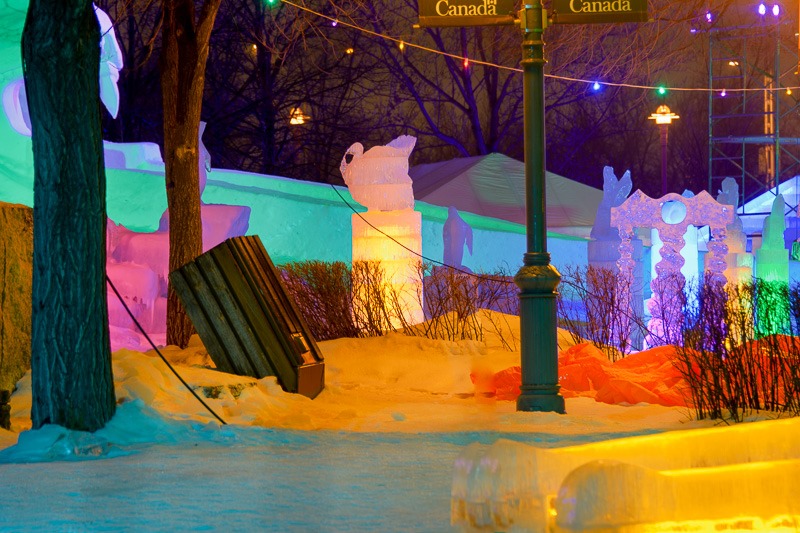 The display of these dinos as well as the shiny ice sculptures was a first this year. I was a bit late to enjoy the first ever Great Ice Show in Winnipeg. A team of professional ice sculptors from China had come here to make fantastic sculptures and structures from ice and snow. By the time I finally had come to enjoy the sculptures, warm weather had already taken its toll on them, leaving me with no option but to shoot them from further away to retain the feel of pristine ice. 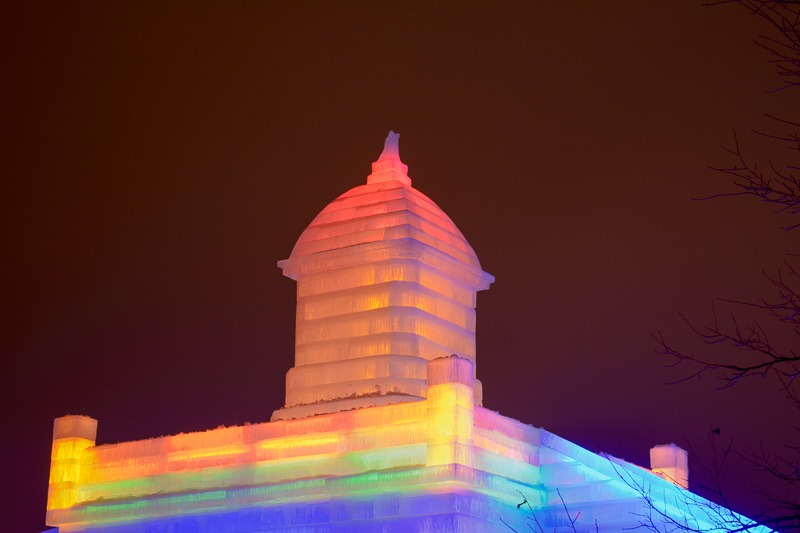 The above structure was about 40 feet high, lit by LED lights of all colours. It’s amazing from how far LED lights have come. When I was a young kids playing with LEDs, they came in three colours only. Red, Green and Yellow. In no way were they capable of lighting up anything bigger than a match box… 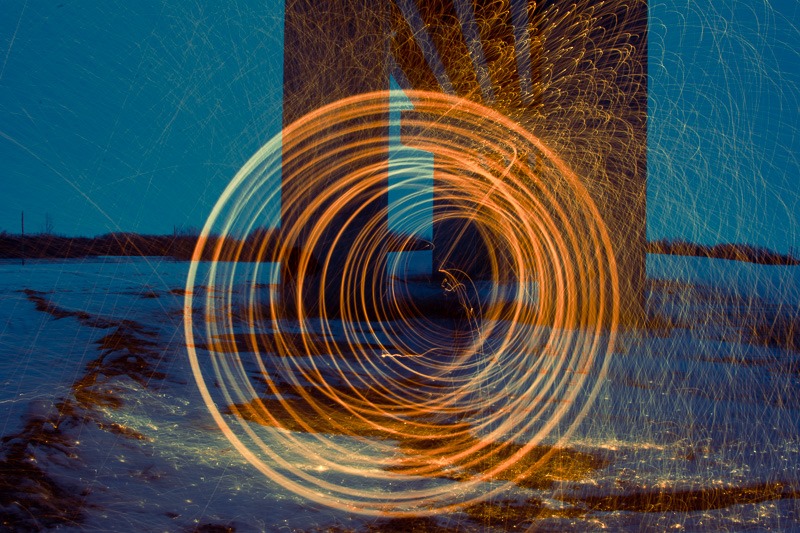 Sparks pulling you in

No, the original lighting for night shots at that time were the sparks and the flames (shooting light bulbs was no fun anytime…). The above shot shows the wind coming from the right of the scene. Shooting those sparks was fun, but boy was it cold…

Shooting in the dark is always rewarding, whatever you shoot. The shots always will have that mystical feeling of showing what you cannot see with the naked eye. Are you intrigued? Well, go out in the dark and shoot something. Even your street at night might reveal beauty you would never have thought was there in the first place.