Last Sunday it was forecast to have some Northern Lights. All the signs coincided for a decent show. So the first thing I did was call a friend to enjoy the show together. Then we left for some interesting foreground subjects. Photographing the Aurora is always nice, but the pictures are nicer if there is some interest in the foreground. 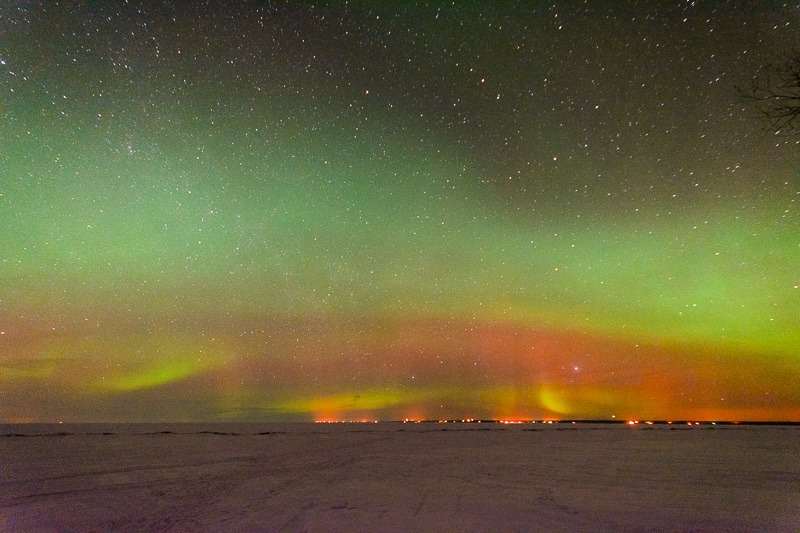 So we found a small church, close to Highway 59, north of Winnipeg. It is a Ukrainian Orthodox church built in 1906.

The first shot I took of the church was a bit of a dud. I had left my camera at ISO 100, and despite the 30 second shutter speed, there was not enough light to show anything. I kept the picture in the camera, just in case something could show up anyway. 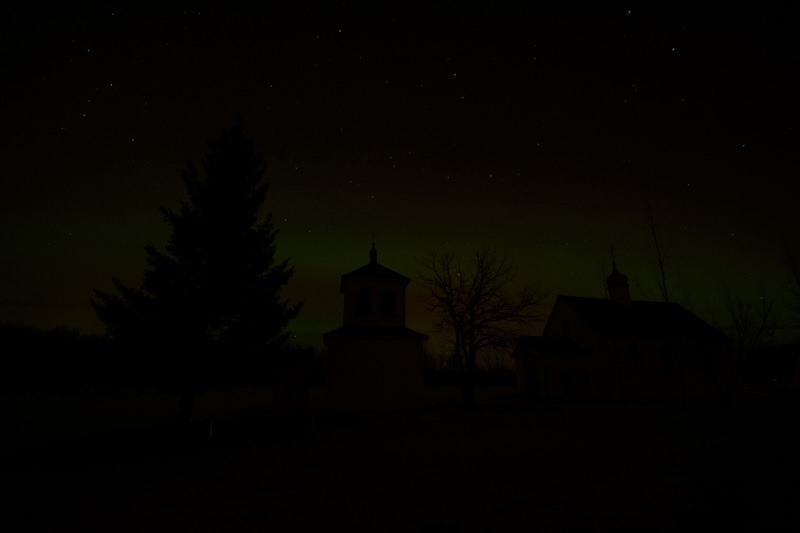 At first, not a keeper

This was the original picture. You can imagine that it was not that dark when we were there. If you look closely, you might distinguish some details, though. Probably in 1906, when there were no street lights or car lights to illuminate the surroundings, the nights might have looked like this. Who knows. I was curious to know if later in Lightroom, there would be a possibility to get “something” from that picture anyway. 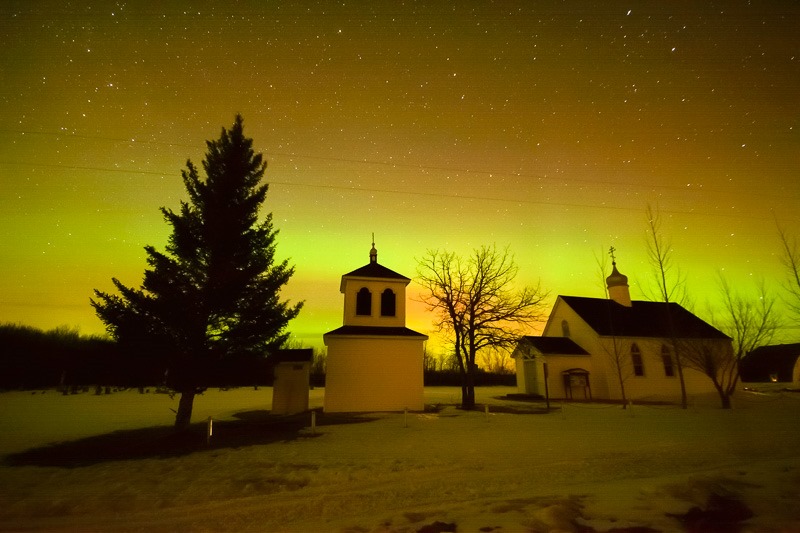 The same picture, recovered in Lightroom

After some fiddling with the picture in the said Lightroom, the above image appeared as if by magic. These are two copies of the same image, one processed, the other straight from the camera.  Of course I adjusted the camera settings a bit to get more usable pictures. By doing so, the more intricate details of the church, but most of all of the aurora became visible. 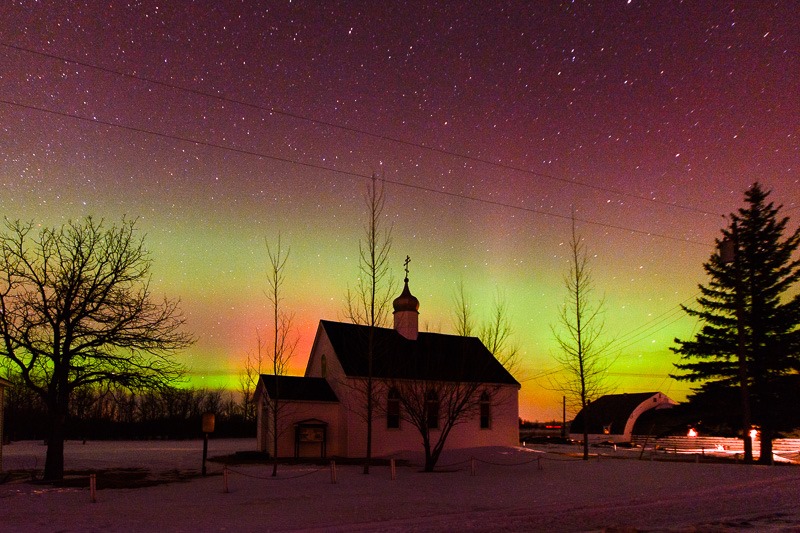 This aurora had an unusual high amount of red in it. Pinkish red. Even the reddish spot just over the entrance of the church on the left was observed from multiple places over the world. All triggering the same reaction of “Is that real?”. Yes, it was

Then we decided to move on, one can only shoot a single object so many times before it loses its interest. We went to the beach. Imagine a nice sandy beach on the shores of Lake Winnipeg. Lake Winnipeg has some of the nicest beaches in North America, according to Condé Nast Traveller’s Magazine. 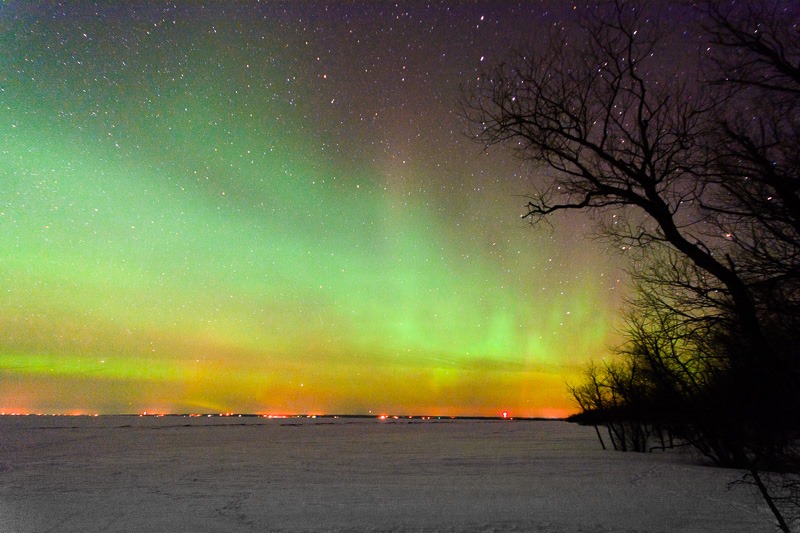 Now imagine that same beach under a layer of 4 feet of snow and ice, no parasols in view, but a glorious light show overhead. Again the pinkish and reddish tints were visible. This time even with the naked eye. The sun must have hit oxygen atoms up there. The green colour comes from the Hydrogen atoms, split up by the solar wind, and when they recombine they emit a greenish glow. More powerful solar particles can break apart the much heavier oxygen atoms. When these recombine, they emit a reddish glow. The orange at the bottom was from the street lights of the town’s street lights.

After having shot the lights for the better part of two hours, we started to get a bit cold. The north wind coming down on us from over 300km of ice and snow was indeed fresh to say the least. At that point the lights started to fade as well. We checked the parameters on the internet and saw that the brunt of the storm was over. 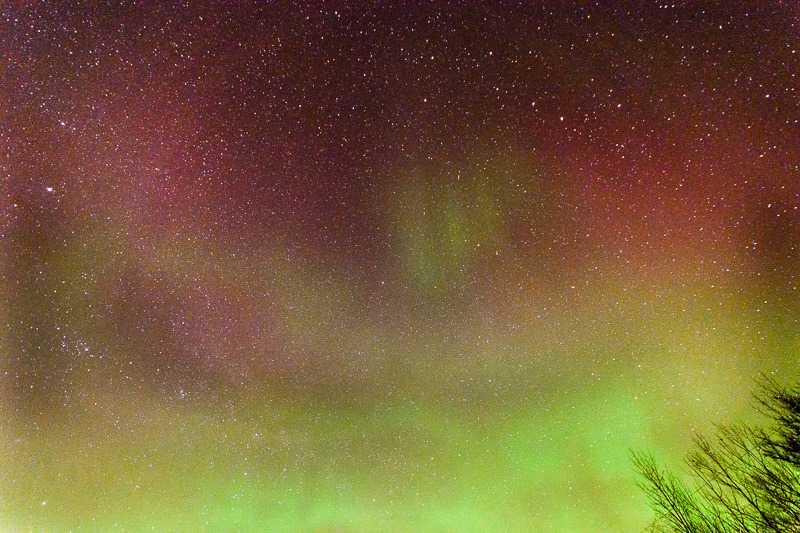 So we headed home. At one point we looked out of the windows of the car, back to where we had come from. The lights had flared up again with a vengeance. So there were two options. Either continue home and warm up, or boost the heater of the car and drive over to another interesting spot for photography. We chose number two

Turning off the highway onto a small gravel road, we went for another church, an Anglican church this time. By the time we got to the church, the lights had considerably dimmed again, but were still good enough to shoot. 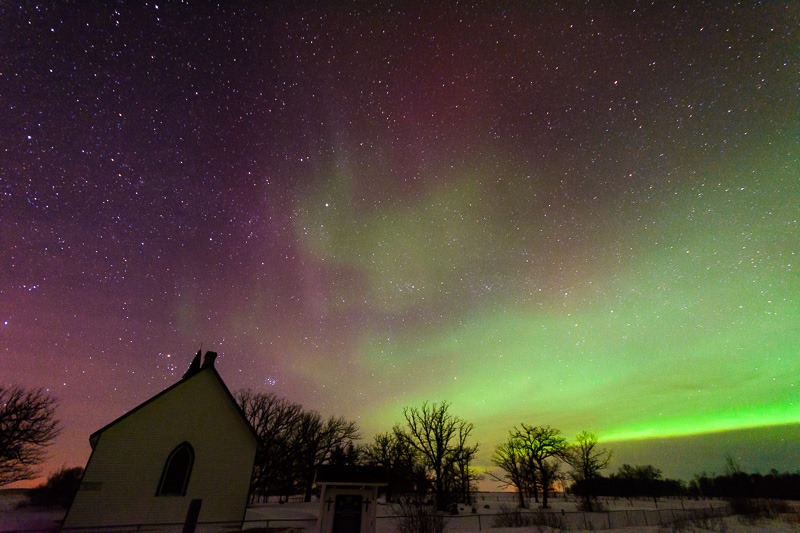 It’s not often I visit multiple churches at night… The wide angle of my lens did create some interesting distortion. The church was straight, have no fear and it is far from abandoned as well. Again in the sky you can see the reddish glow from the oxygen. The purple is from Nitrogen ions at very high altitude. 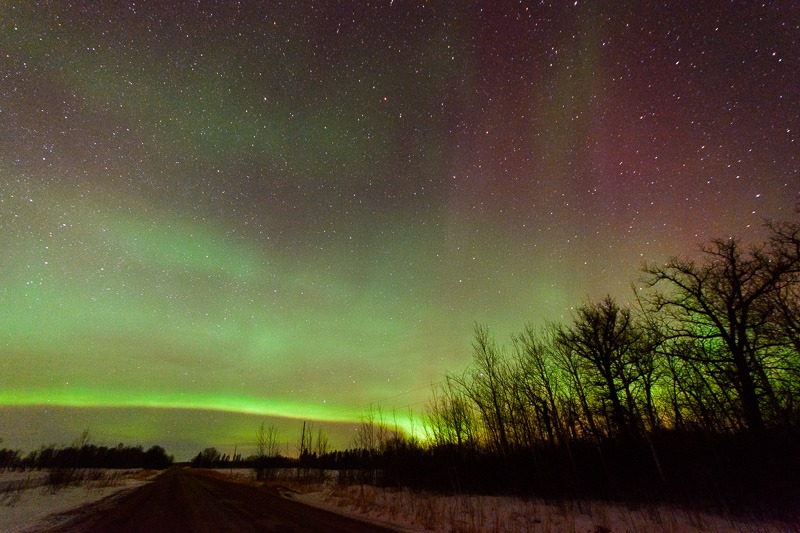 One last shot over the gravel road and we were on our way home, again. By the time we got home, someone had turned off the lights.

For a lightshow that didn’t have a BIG number attached to it (you can get that information in real time here), the show was still very worthy of going out.