Manitoba in winter is a horrible place. There is nothing to do and nothing to see but black and white landscapes. The most exciting things in the snow are your own footprints. That is what we often hear from people that have never been here and have no intention of spending some time in Manitoba. Let alone in winter. 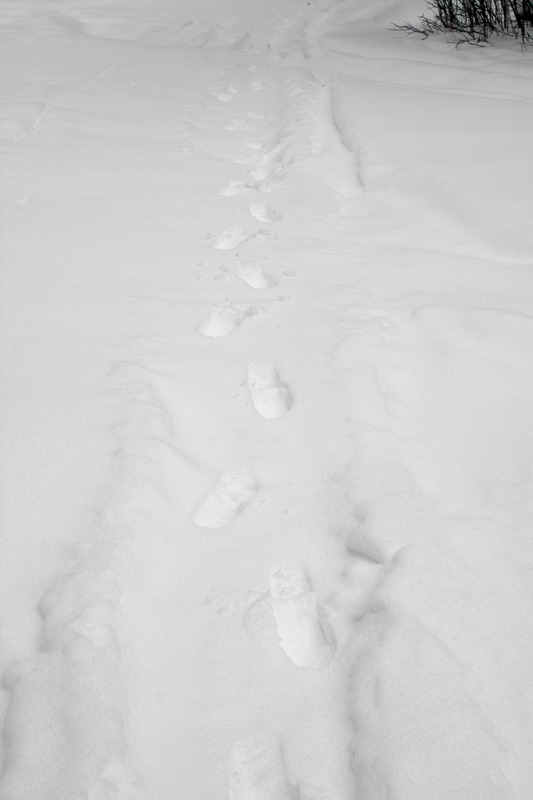 So here are a few pictures of what you can see in Manitoba without making any effort.

The first one is of your back yard, or if you are in a hotel somewhere, from your balcony. No need even to set a foot outside for fear your toes might freeze off in those 20 seconds outside. Oh, and before I forget… make sure you wrap your camera in a fur hat, for example, it might seize up as well. 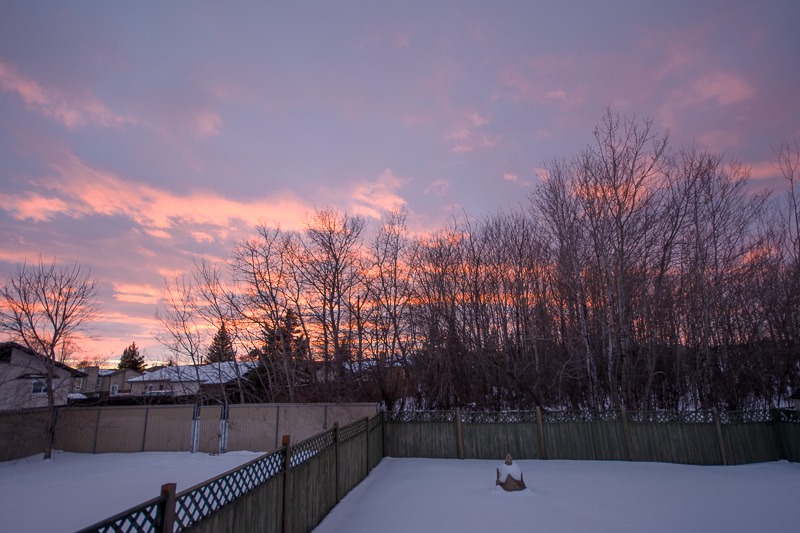 In winter the roads are truly impassable, snowmobiles are all Manitobans have for transport. We use them for everything, including hauling groceries over the ice on our way to our ice-fishing shacks. 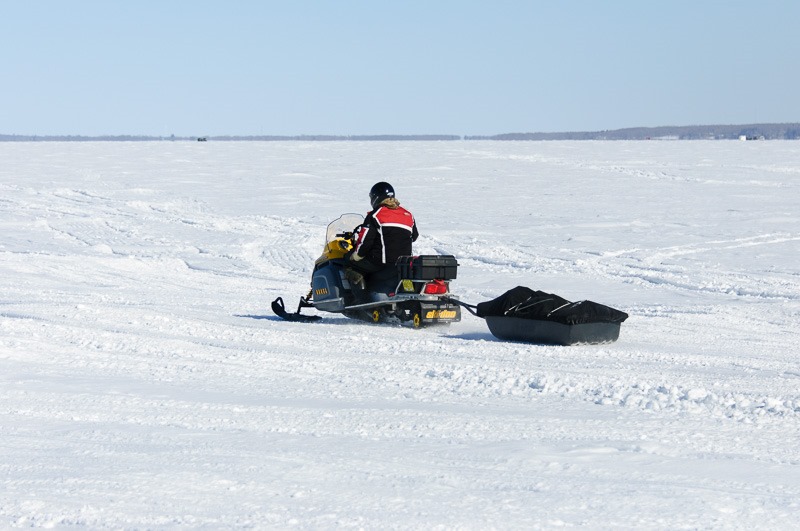 Snowmobile on the run

The lakes and rivers are all frozen, no way to enjoy some swimming or even kayaking. What else would you be able to do on a river? Skating? Skiing? Curling? Or just a walk in the evening? 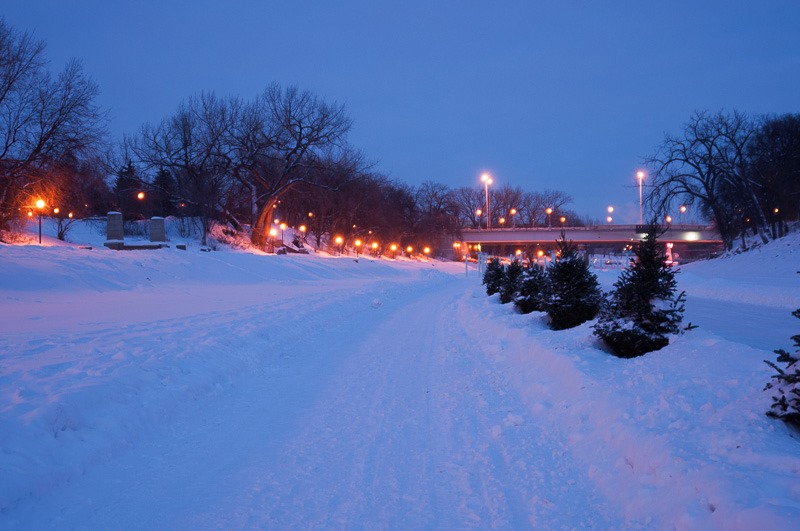 No, there is really nothing to do on the frozen rivers in Manitoba. Let’s forget ice fishing as well. There are no photographs to be had, everything is only just white and greyish black.

So now that you think you understand what Manitoba is all about, I can show the alternative reality of winter in Manitoba. Apart from staying inside drinking Caribous, the colour is everywhere. From the snow sculptures during the Festival du Voyageur in February Winnipeg, to glorious sunsets at any day in the winter. 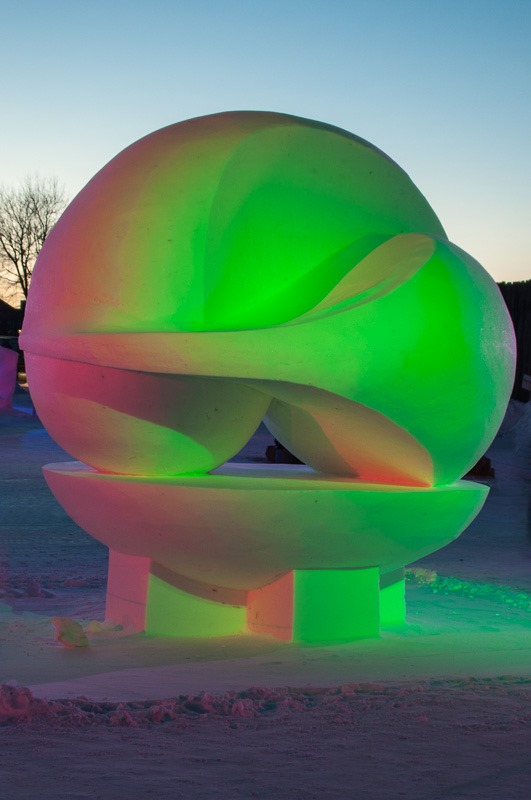 Granted we have our overcast days, but with 300+ days of sunshine per year, Manitoba usually gets the light. Vitamin D abounds in this place. 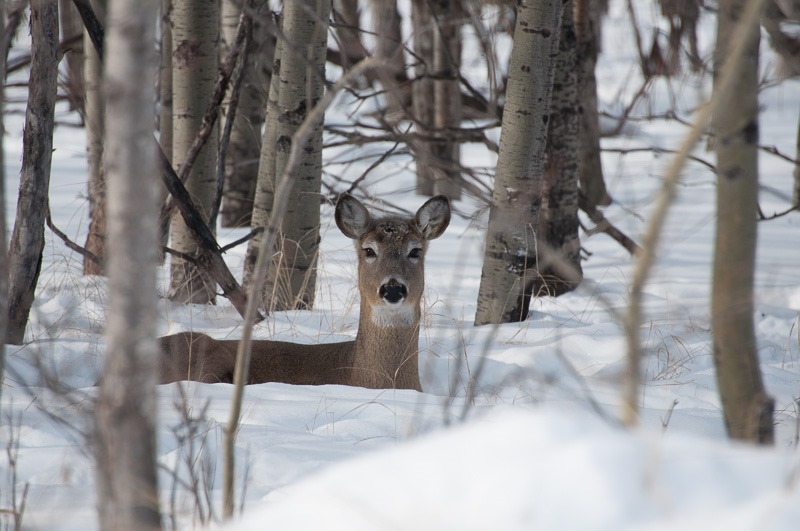 Resting in the yard

If you’re not careful, the deer can even come up to your house inside the city to eat whatever is left in your yard. 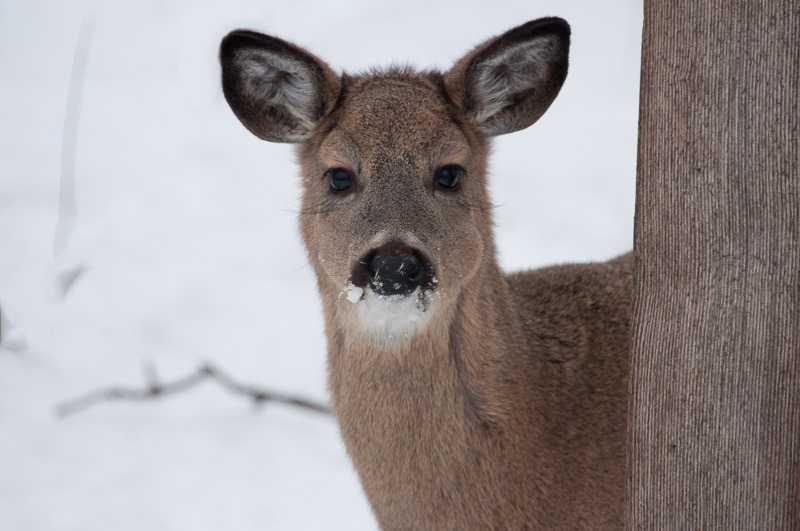 They are fairly used to people and hunting inside the city is forbidden, so where would be the best place for the deer? Inside the city. 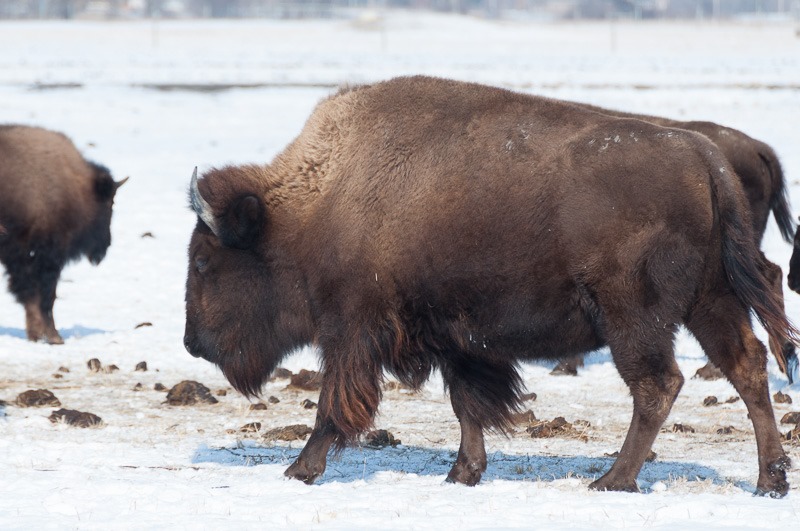 Bison are a bit more cumbersome to let them roam around in the city, big compounds are created to give them as much space as possible to fit their needs. And yes, some houses are on the border of those bison compounds, their yards protected by a mere chain-link fence. 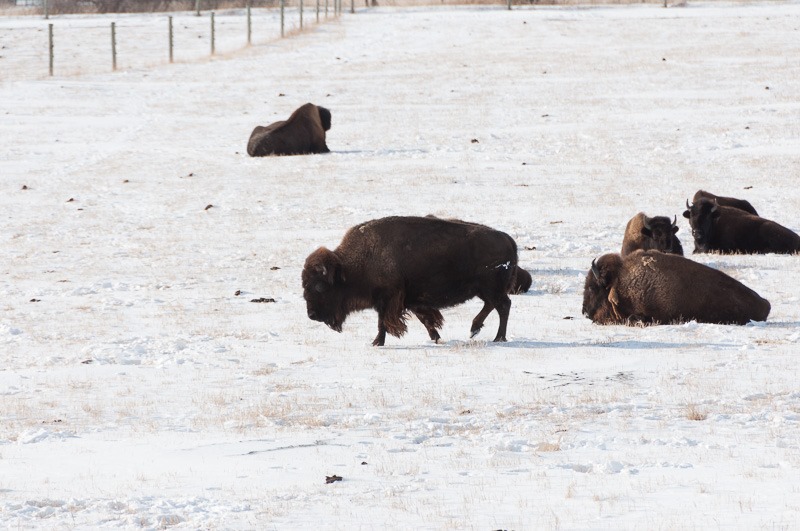 Walking, hiking and skiing are on the menu everywhere. Groomed trails are available in most of the bigger parks in and around the cities. 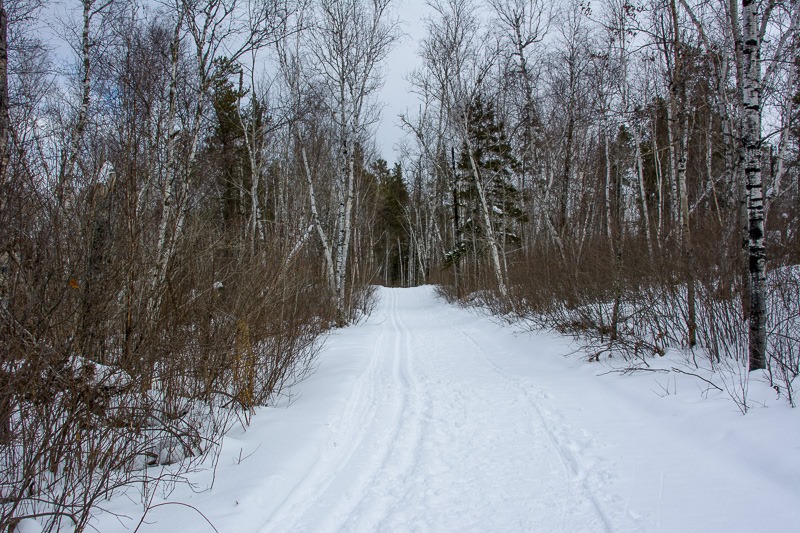 If the ice is thick enough, taking your truck or 4x4 vehicle onto it may yield some very neat pictures of places you usually don’t get to. Here, the start of Lake Winnipeg, having gone by car over all of the marshes that form the Red River delta south of Lake Winnipeg. 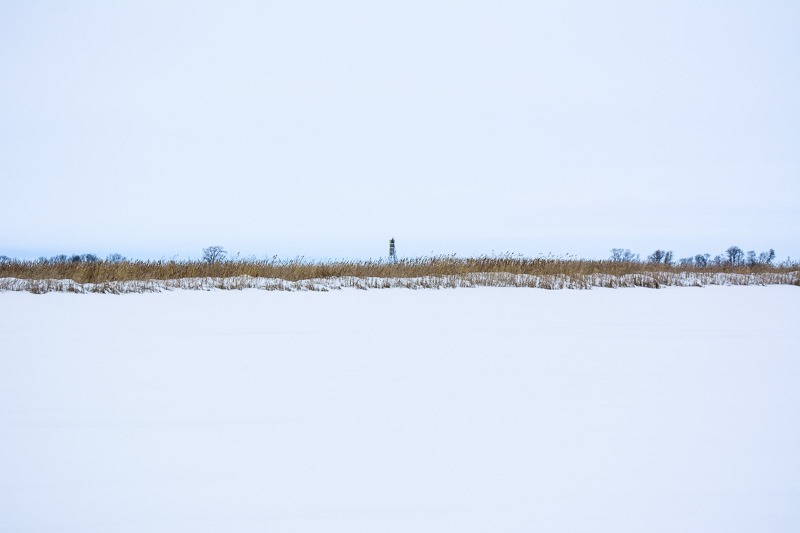 A beacon at the southern tip of Lake Winnipeg

There are not many people or houses around for sure, but if you are looking for a quiet place to either relax or do some ice-fishing, this is the spot. 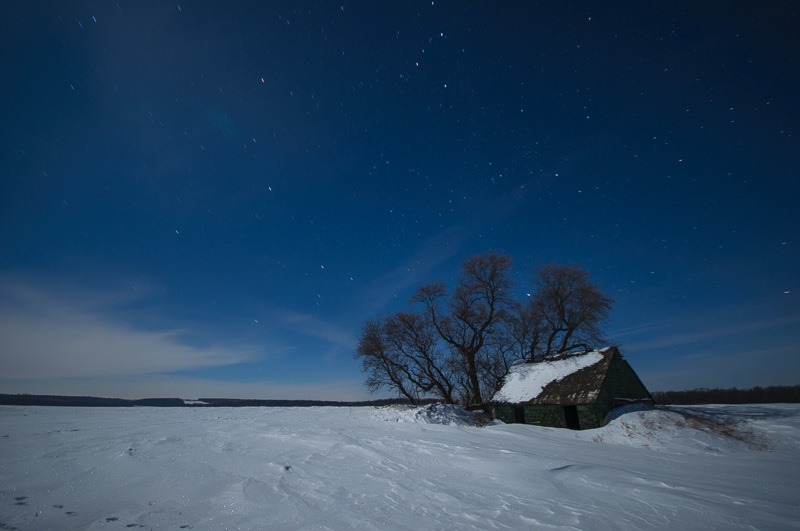 A barn by night light

If you are more of a night person, the province can give you all kinds of beautiful views. Stars are everywhere and often the Milky Way can be seen as well. Finding dark places is not very difficult, go out of the city and after a 15 minutes drive, and you’re set. 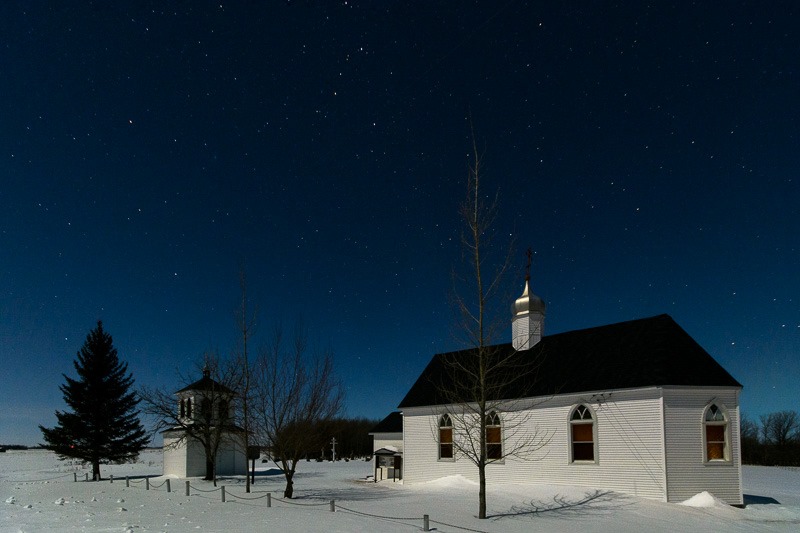 On many nights the Aurora Borealis is visible, sometimes for a great show, sometimes for a… ehm… not so great show. The above shot was taken on an Aurora hunting night. While we were in the car the show was great. When we arrived at this nice little church, the lights had gone and all that was left was a faint green glow through the trees far away. 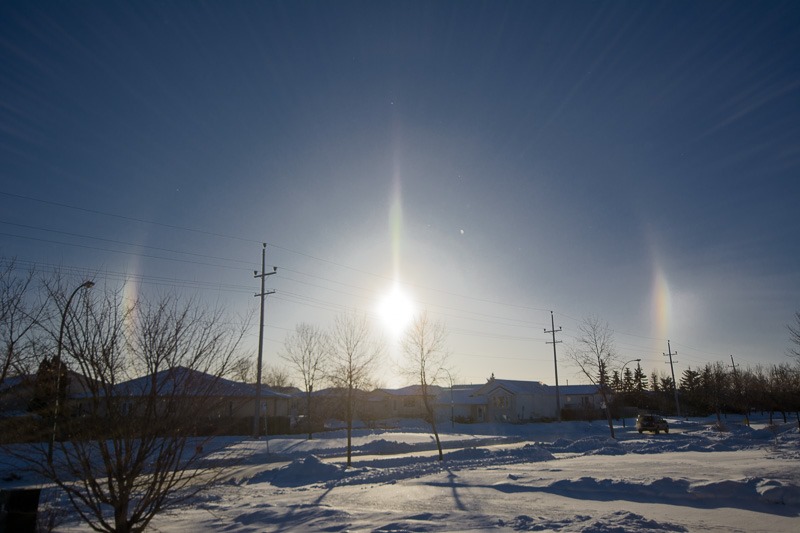 After a good night’s aurora hunt you may be greeted by the sun and his acolytes. They are called sun dogs and are a common phenomenon in Manitoba. The first time I was introduced to sundogs was in a movie called Baghdad Cafe. I had never seen them and thought they were Hollywood inventions. Here in Manitoba you can see them for real.

So Manitoba in winter is a forbidding and boring place? Not so! You just need to go looking for the interesting times and places. There are way too many of them to cover in one blog post. Go out and try for yourself!