Medley of a day

A photographic medley, of course. It’s always a pleasure to go out in the Manitoban Wilderness, even more so if there are friends in the car with you. A few days ago we decided to go through Manitoba, not too far away from Winnipeg to see what kind of wildlife we could capture on our sensors. We were specifically looking for the Manitoba Provincial Bird, namely the Great Grey Owl. 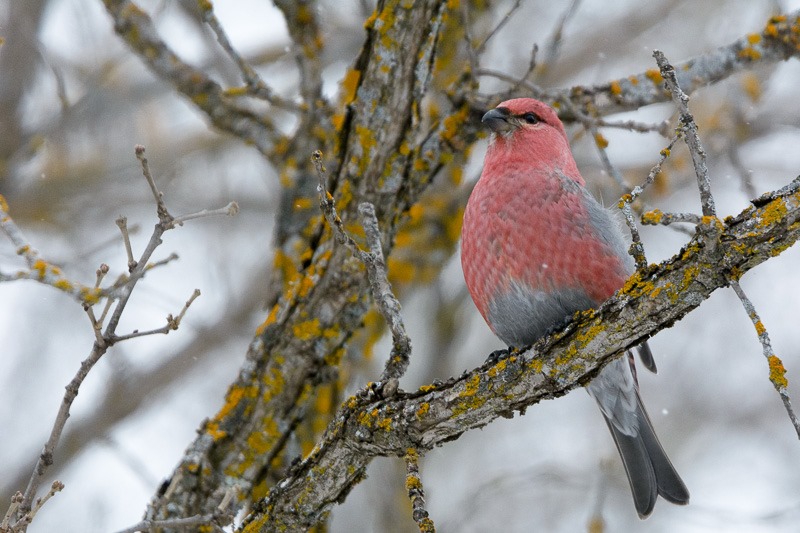 Needless to say that when you are really looking for one specific species, you won’t find it. Even more if the species in question decided that it does not like to be found…

Then you’re out of luck

. If you insist on looking for only one species, then you will also miss out on all the other species that have NOT chosen to ignore you. The lead picture is a male Pine Grosbeak, enjoying a full belly from food from a nearby feeder. His red colour is already amazing, it is supposed to get even more vibrant when the breeding season starts in a few weeks. 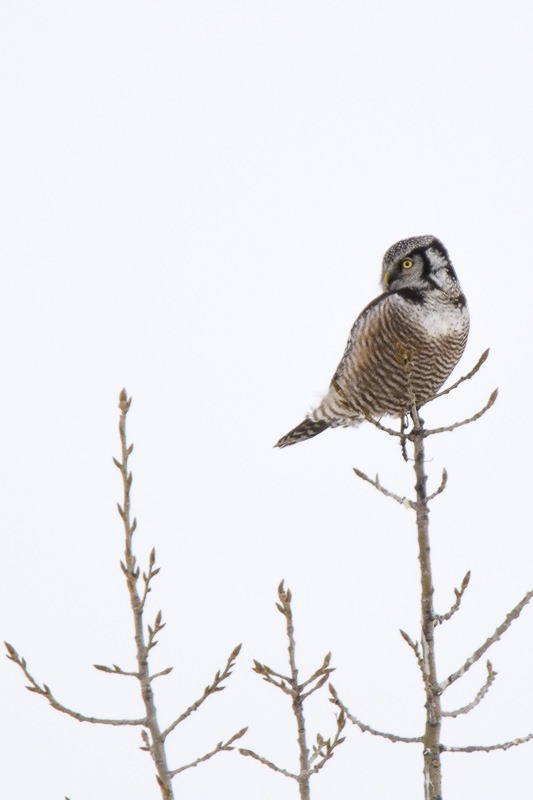 The next bird we found was this Northern Hawk Owl. It was sitting quietly in a treetop about a 150m (170 yards) away. With two cars and four photographers shooting away at it, it simply ignored us and continued to hunt. The yellow eyes are amazing of this bird, its hearing and eyesight make me jealous. 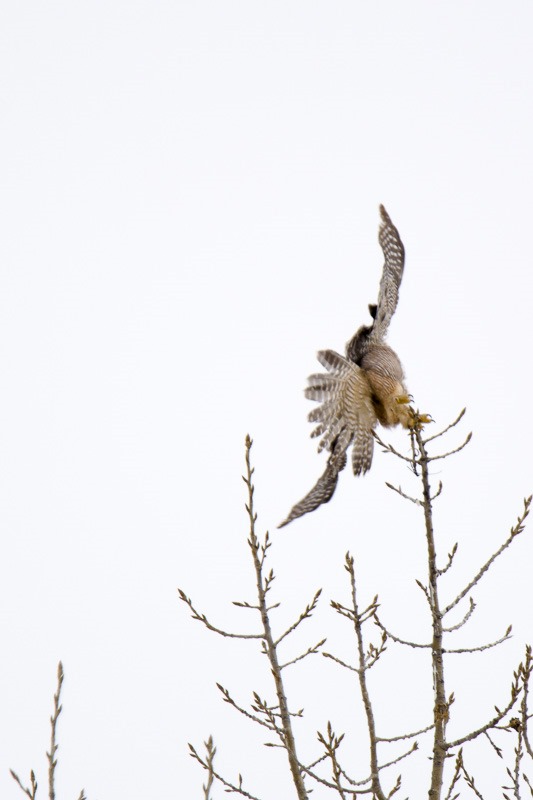 After a few minutes, it took off suddenly, swooped down into a field and… missed its prey. It came up into the same tree again and continued its silent hunt from high above the fields. Above is the sudden outburst of feathers that do not look anymore like the orderly arranged feathers of a bird. Its flight is completely silent. One thing is sure, I wouldn’t want to be a vole in the fields this guy/gal is overseeing… 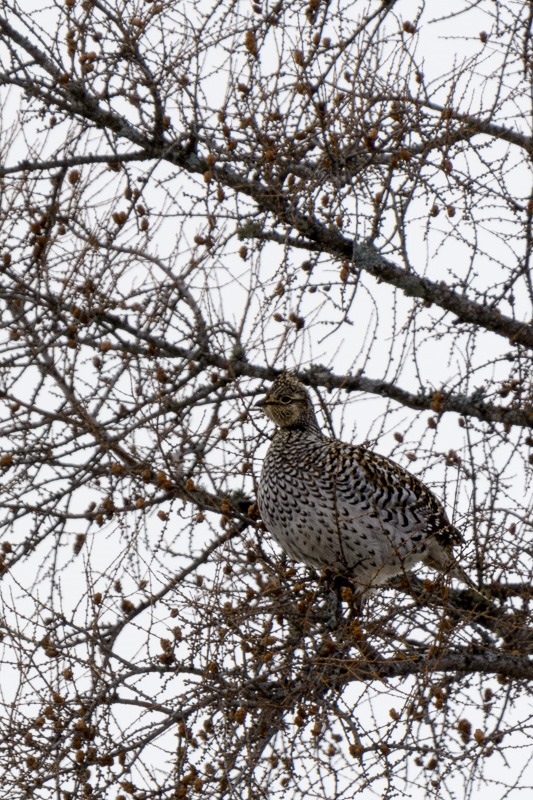 The next bird we spotted was a Sharp Tailed Grouse, high up in a tree too. This one was a bit more difficult to shoot as branches in front of it wanted to steal the focus point of my camera. This is a “lifer” for me, I had never seen this bird before in my life. 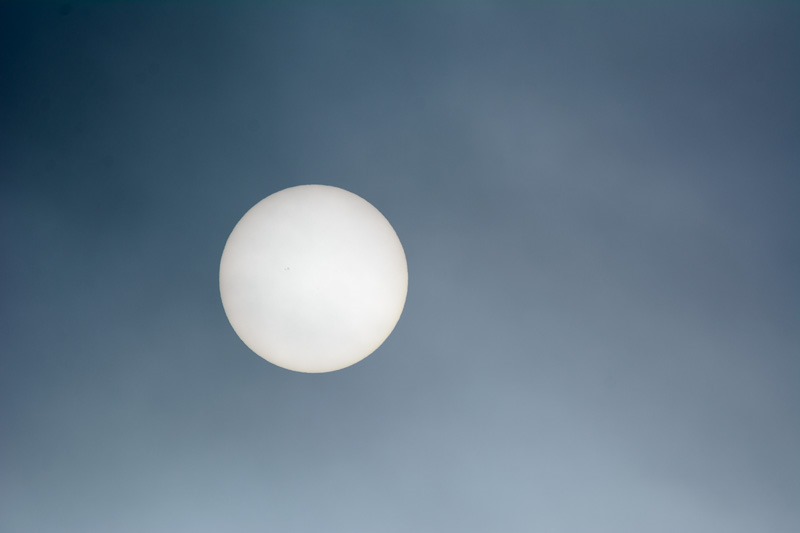 When we started out in the morning, the sky was bright and sunny. But after a while that same sky started to get veiled with a thin layer of clouds, high in the atmosphere. That continued for a while, robbing our poor cameras of more and more workable light. When I thought it would be “dark” enough to point my camera directly into the sun, I took the above shot. At first, from the back of my camera I thought I had some sensor dust I needed to take care of. A glance at this website revealed that is was a sunspot. This one named 2488. To see it, I had to darken the picture a bit using Lightroom. You can see the spot to the left of the center of the sun. Sunspots are usually responsible for aurora displays here on earth. Let’s see if this one has something nice for us. 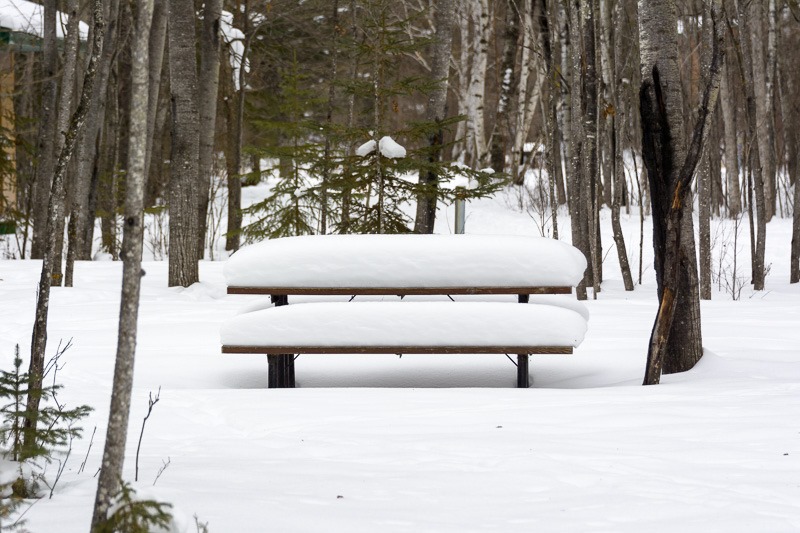 Then it was time to get a bite to eat. Nearby Nutimik Lake provided a nice and quiet environment for that. My companions were not so much in the mood for clearing a table, however. Adventure only goes so far I think 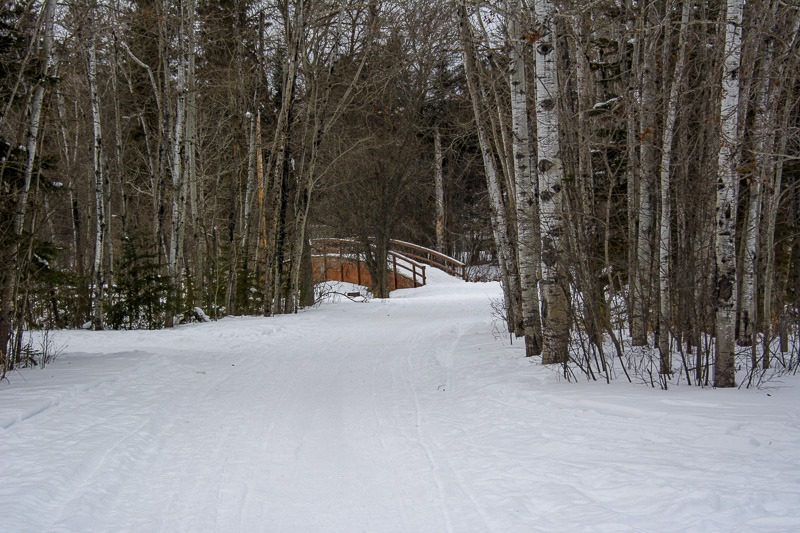 After a sandwich or two, we were restored and back on the road. But not before I got a shot of this nice little bridge over ice (not troubled water). By that time the Snow Mobiles had found the spot as well, all quietness was gone from the air, to be replaced with exhaust fumes and noise. Time to go! 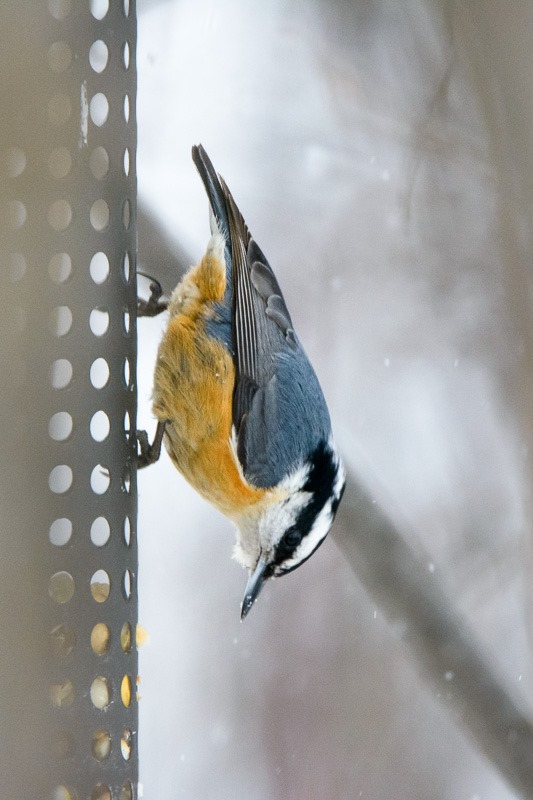 We decided to take another shot at wildlife, this time in a place where success would be a bit more on the guaranteed side. Birds Hill Park has a number of feeders, maintained by people that love birds. The lead picture of this post was taken there. The above Red Breasted Nuthatch is a rare sight in Manitoba, at least in this part. As you can see it was on a feeder, a scenario I like to avoid usually. This one did not want to be photographed anywhere else, so feeder it was to be… sigh.

Even if the day was dedicated to the Great Grey Owl, and royally ignored by them, we had a great day with lots of beautiful opportunities for birds. What is even better is that the places we saw provide lots of extra spots to find more birds and other wildlife. One of these days I will get myself some fur… Alive fur, that is.