City lights… most photographers talk about them, many shoot them, and few get them the way they like. Now why is that? Light trails from traffic is very much sought after, closely followed by Christmas decorations. Then there is a long void, followed by street lights and a few other odds and ends. 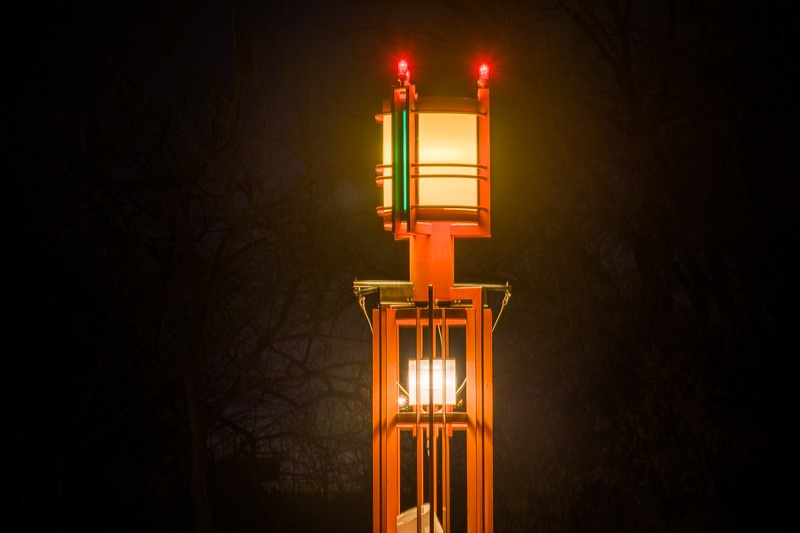 As if there was nothing else to shoot in the city. Or isn’t there?

I have to admit that shooting city lights is mostly a winter activity for me. I guess that for the city I’m not much of a night owl. With a sunset around 4:30pm, shooting in the darkness becomes way more attractive. The last few times I was out, was around 6pm, and back home around 9pm. Very reasonable and not encroaching on my beauty sleep in any way. 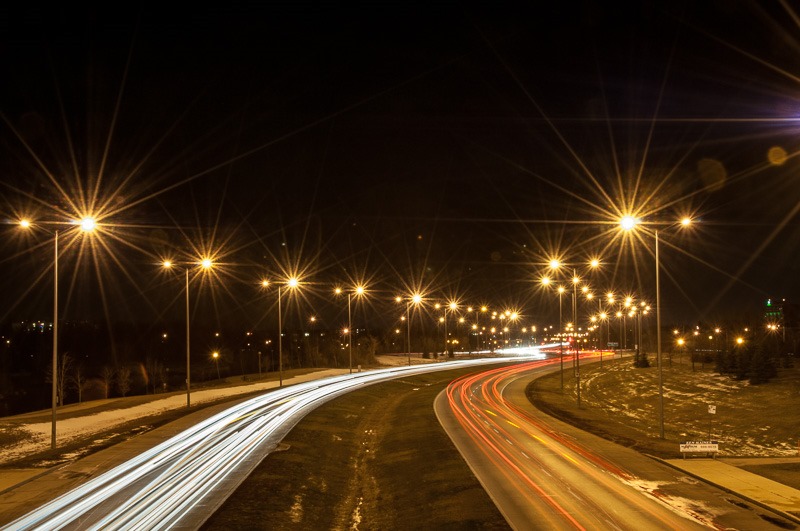 Light trails from cars on roads are not easily had in Winnipeg. You need sufficient traffic as well as a place that is open to the public that reaches over that road. Winnipeg being on a flat terrain does not have many of these… The above picture was taken a long time ago with a group of enthusiasts addicted to photography. Later this small group would grow to the size of half a dozen football teams. We name ourselves the Manitoba Foto Friends. 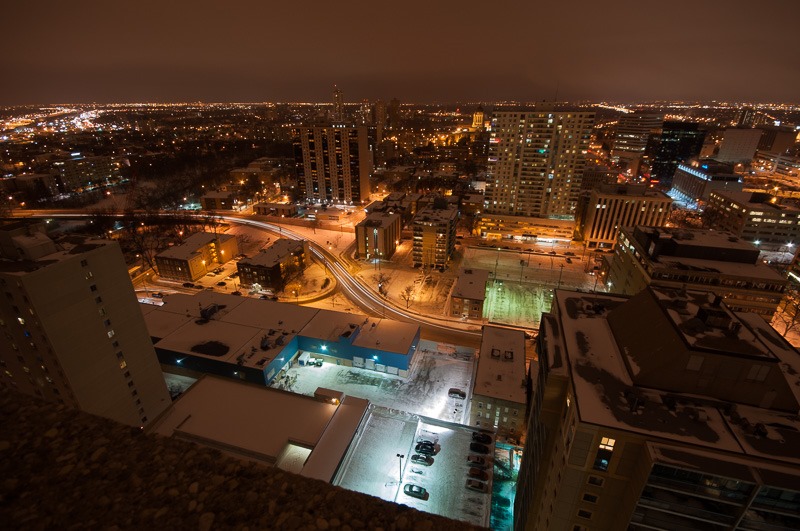 High up, reservation and clean rap sheet required for access

As Foto Friends, we all like the light and like painting with them. We also like to get them from unusual places. Preferably high-up as this is a prized type of shot in a flat world. The above shot illustrates that pretty well. High above the rest of the city, the absence of mountains and hills is very visible (hmm, visible absence…???). 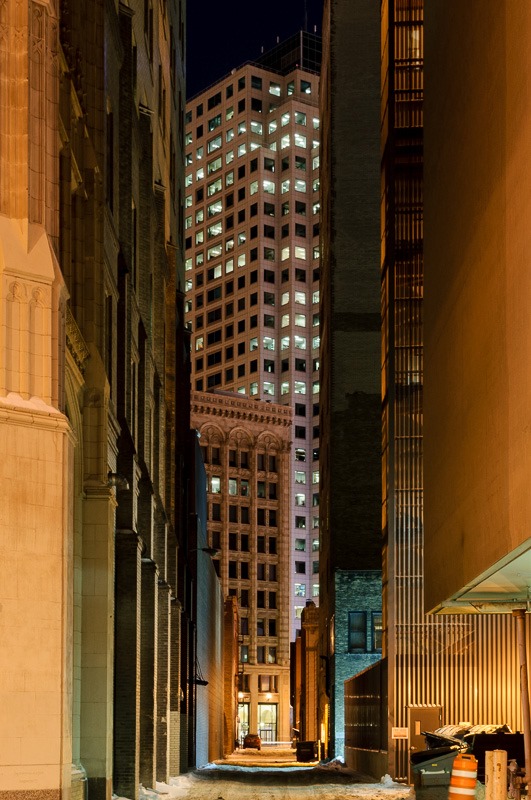 Other times, I go out, all by myself or with a few friends. Downtown alleys and high-rises are then a favourite kind of shot. Even more if they are taken after dark and with some snow. Snow has its own advantages. You can get lowlight shots way easier as the snow acts as a natural reflector of any light. Add some heavy clouds above and the city lights will warm up your shots from all ends. 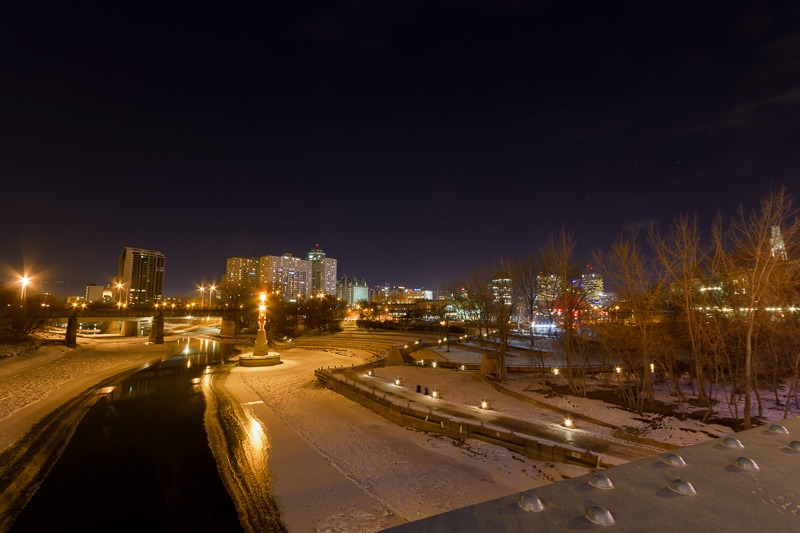 Classic view of The Forks

But sometimes, a deep blue sky is also not to be cast away. The foot bridge at The Forks can give some nice results. Above, the rivers were about to freeze over, nobody was walking on the ice just yet. In other places, the first ice-fishing shacks are already popping up near the shores. Soon they will be everywhere and Manitoba will have a way more evenly distributed population 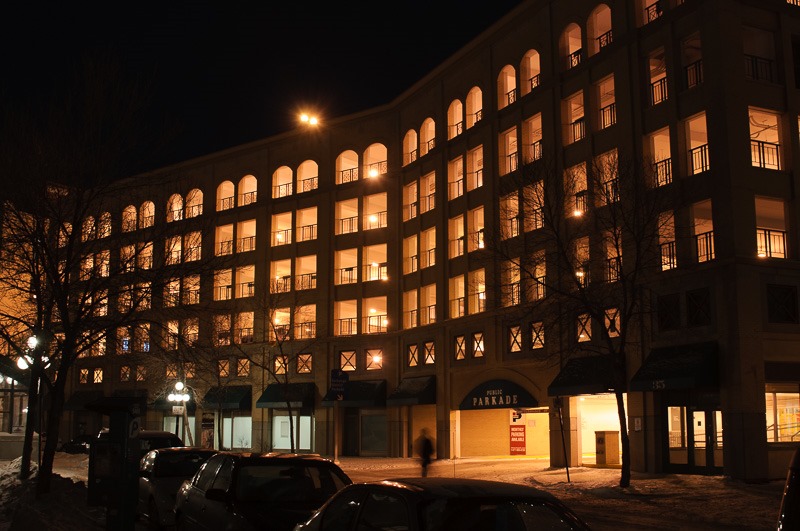 But let’s stick to the city lights. The above picture is of a parking lot, or Parkade, as we call them here. Evenly lit from the inside, the outside shows like a giant Halloween pumpkin. After a while, you will get the idea of the city lights and you will want something more. That is what some people call creativity. 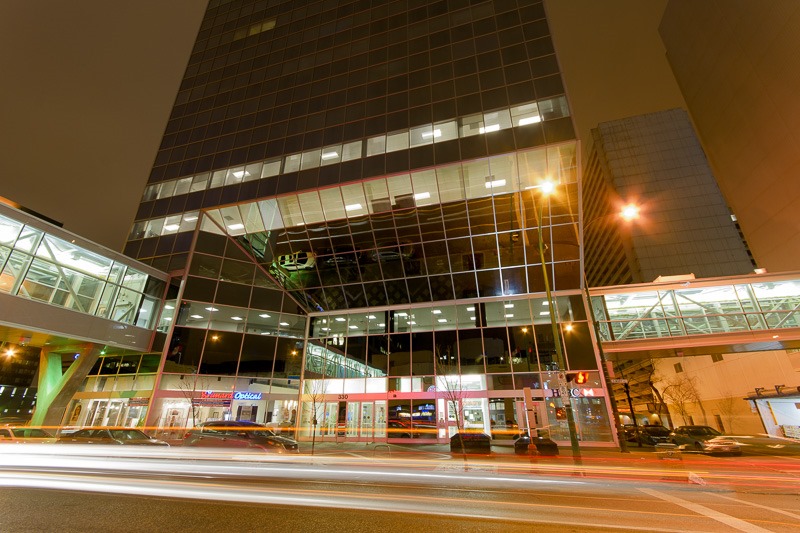 Combining buildings and light trails, anyone? After a few shots in the same style, that evening, we were up for a better challenge. My friend, that evening, had been telling me that already for a very long time (read decades!) that he did not get fooled by tear-jerking stories in order to get some money from him. He has a different way of helping people in need. So we packed up after some time from the above spot and walked back to the car. Comes along a young man praising our photography gear. He also asked us for a few bucks to get his car out of the parkade. My friend was sceptical at first, but then gave him his 3 dollars when the man told us where we could get up high on a building to shoot some panoramas. 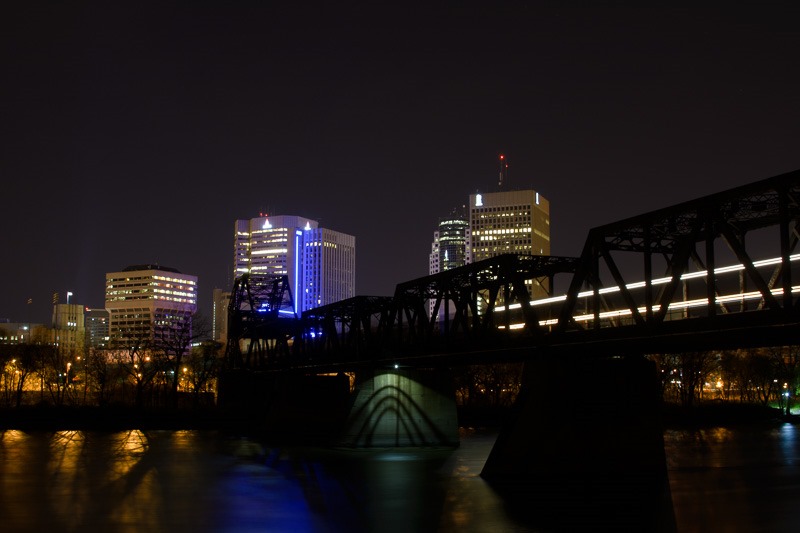 The building was supposed to be not far from the above buildings. When we arrived at the said building, the guard at the door promptly refused us entrance to the top floor, stating he knew nothing of such an arrangement with his management. It was the first time in years that my friend had been scammed out of some money from his pocket 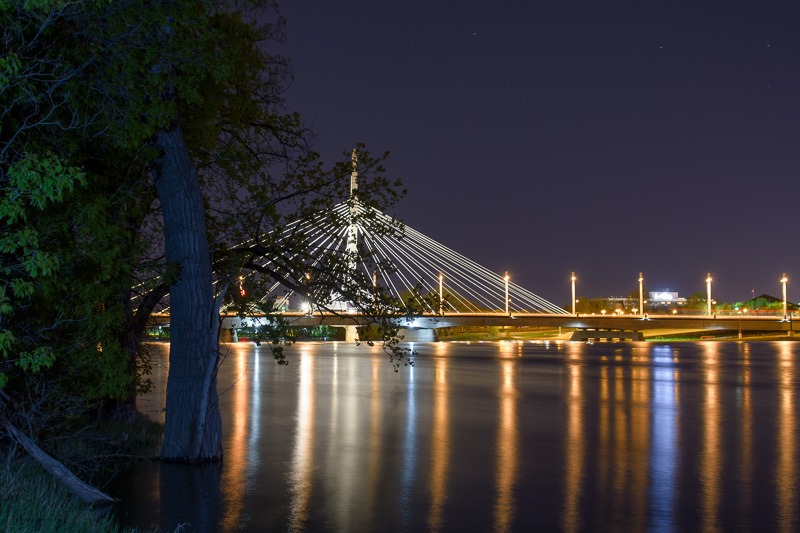 Shooting night time bridges in Winnipeg is a favourite activity of many photographers, knowing we lack a lot of hills and high places to shoot from. The challenge has become to shoot those same bridges in a different light or from an unknown angle. Mission accomplished in the above shot. It has now been copied several times, though. 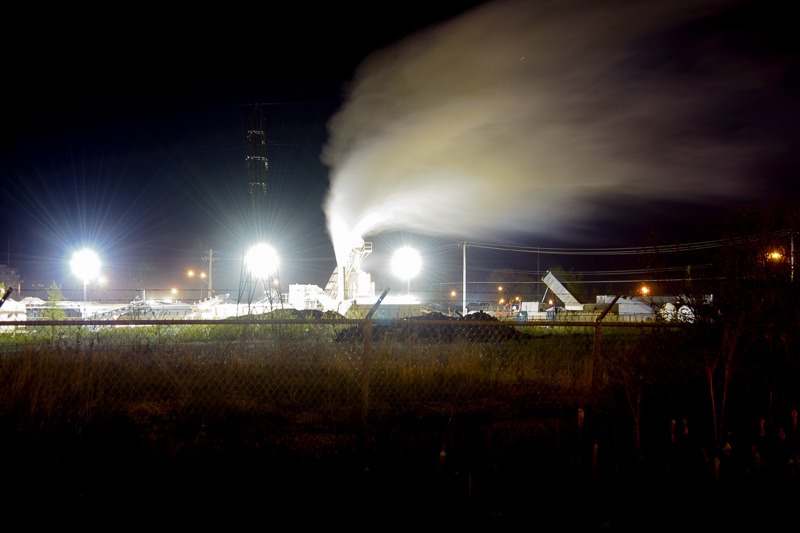 After all those shots, the only one that comes close to the category of originals is the above shot. It is a cement operation in the city. They only do this during the night, either in preparation for the next day or to not show the mighty steam (???) plume they create. I’ll leave it to a steam plume, I can hardly imagine this to be pure pollution released under the cover of night.

City lights are everywhere in the city. Every city has different views and possibilities. All you have to do is get out of the lazy chair in front of the TV and get out and get them. Well, usually. For me it was more a question of shooting something I hadn’t shot already a dozen times before.