A day in the wilderness

Last weekend I decided to go off the grid with a friend. We had been scouting the area already a few times, always coming up with new ideas and plans for returning there once more. 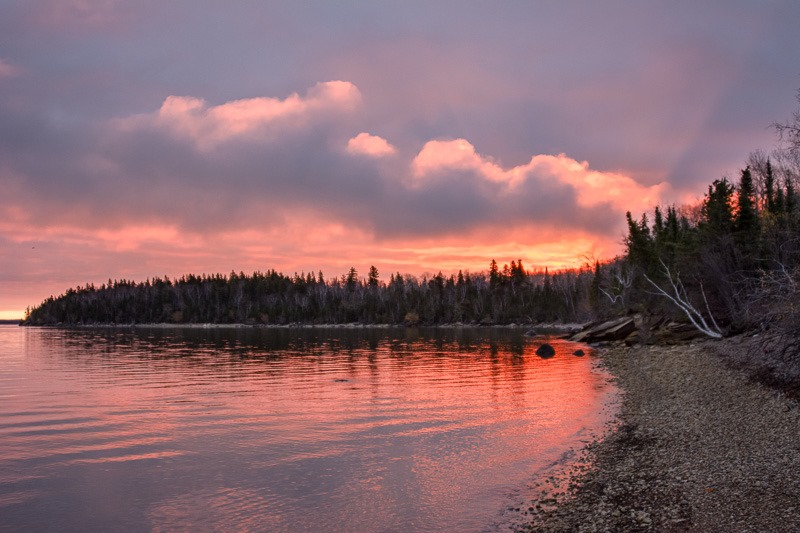 So this time we decided to take off from Winnipeg around 5am. Not my usual time for getting up, that’s for sure. After driving for about two and a half hours we arrived near the area we wanted to visit.

Already for a while we were looking at the potential of the sunrise but were not convinced something great would happen. Too many clouds were already stacking up on the horizon. The clouds left us with a very narrow band of light just above the lake. We decided to drive on to our destination. The pebble beach was frozen. The morning air was fresh, to say the least

. The lead picture of this post was the 4 minute surprise of the day. The colours were simply amazing. 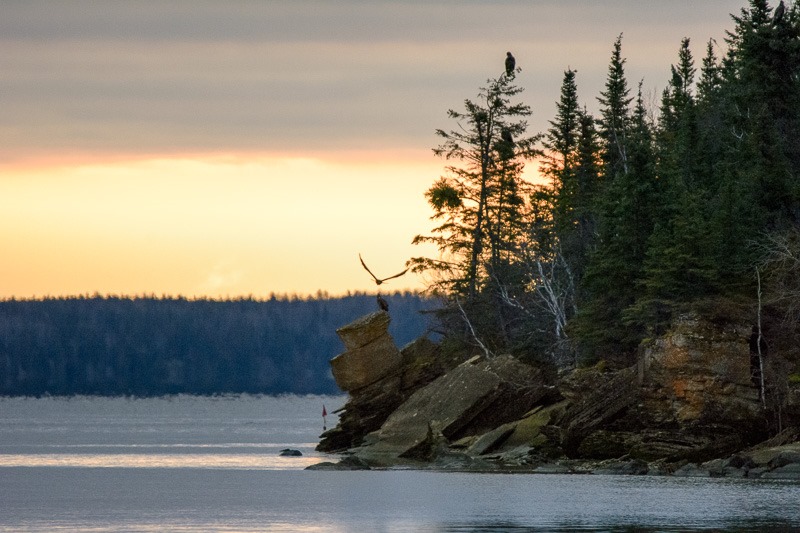 Then, as quick as the sunrise had given us amazing colours, it was over. The goal of our trip for that day was to get Eagles, and lots of them. On the left side of the lead picture, there is a land point, we call it Eagle Point for lack of the real name. I zoomed in on that point from where we were standing and thought I only had some rocks in the shot. On my computer I noticed that there were also five eagles in that same shot. Not very well defined because it was a bit too far away, but still. Five eagles in one shot. Even at the zoo you can’t get that many! 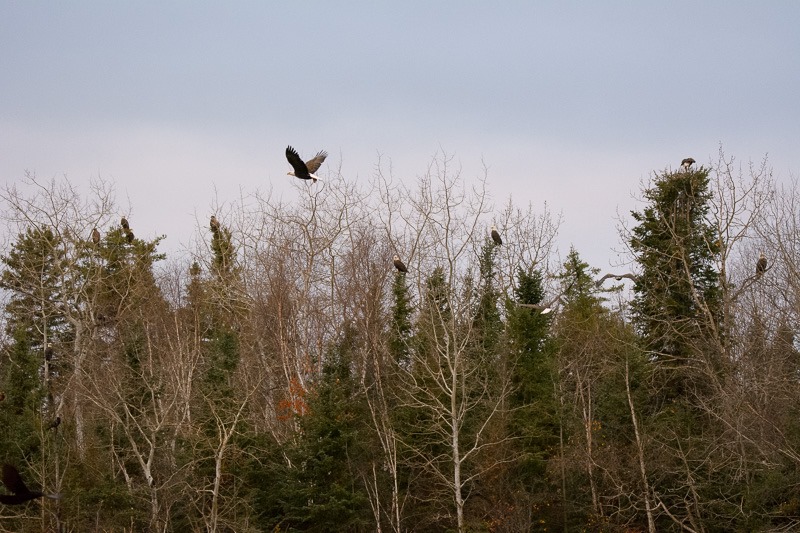 That little beach was nice, but it was not our final destination for the day. The above picture gives a better idea of what we were after: thirteen eagles in one shot. Not bad for the beginning of the day. The place was literally overrun with eagles of all ages and all stages of life. At some point we were convinced that there were a lot of Golden Eagles mixed in there as well, but it was hard to be sure. I guess that even in the bird section of the universe, youngsters can look bigger than their parents. 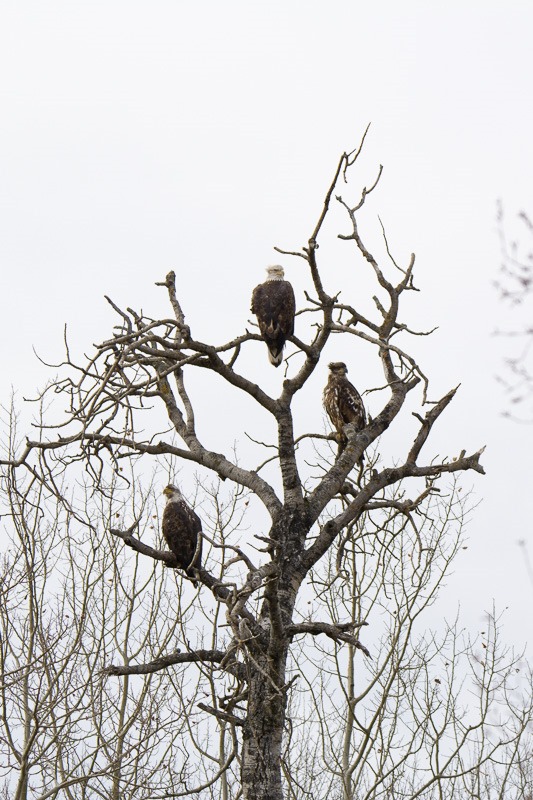 It soon became apparent that the sun wouldn’t be on the menu for the rest of the day and bleak skies were to be the norm. You would think that it makes it easier to shoot those birds if the harsh sunlight is absent. Not really. The sky was still bright enough to provide a lot of contrast, but shooting upward to it made for some real challenges. It is hardly a solution to take a speedlight and use it at those distances. Even more, that same speedlight will limit your shutter speed to whatever its maximum sync speed is. 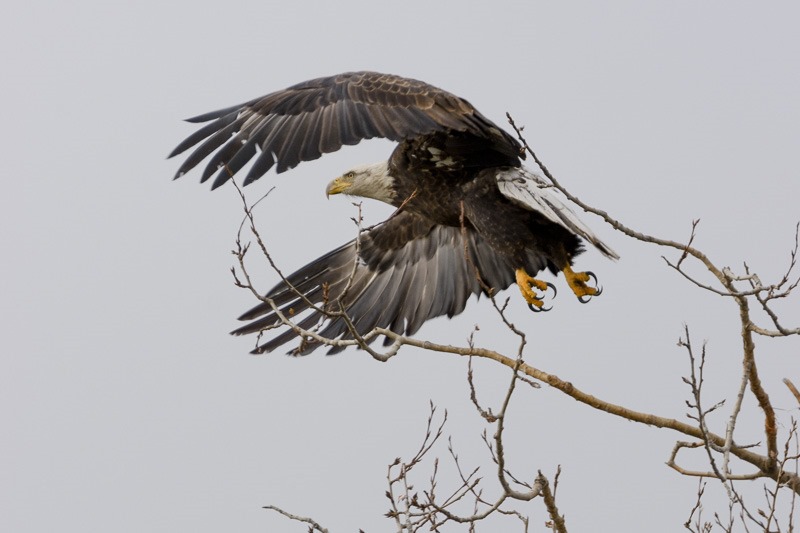 And even at the maximum sync speed of 1/250 of a second, that is way below the reasonable limit for sharp bird shots. For myself I had set auto-ISO on my camera with a maximum ISO of 3200 and a minimum shutter speed of 1/1000 of a second. I got sharp shots, but many of them were too grainy for my taste. The birds have tiny feathers and lots of detail that is lost in that same sensor noise. Lightroom Noise Reduction also didn’t help much. 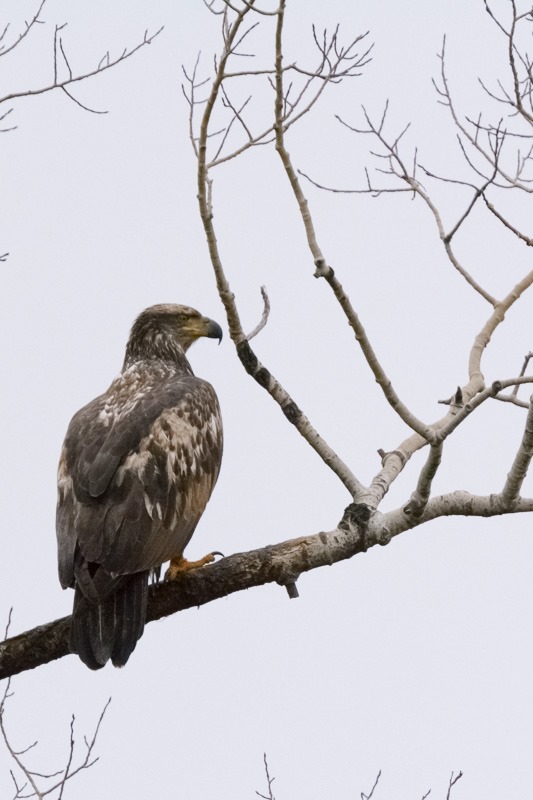 When the birds were sitting still, I could lower my ISO somewhat and get better quality pictures. Another small challenge with this type of weather turned out to be chromatic aberration. Shooting stark contrast against a light background often brings out the worst in your lens, whatever quality, price or make it is. Happily Lightroom is capable of removing that with a lot of ease. 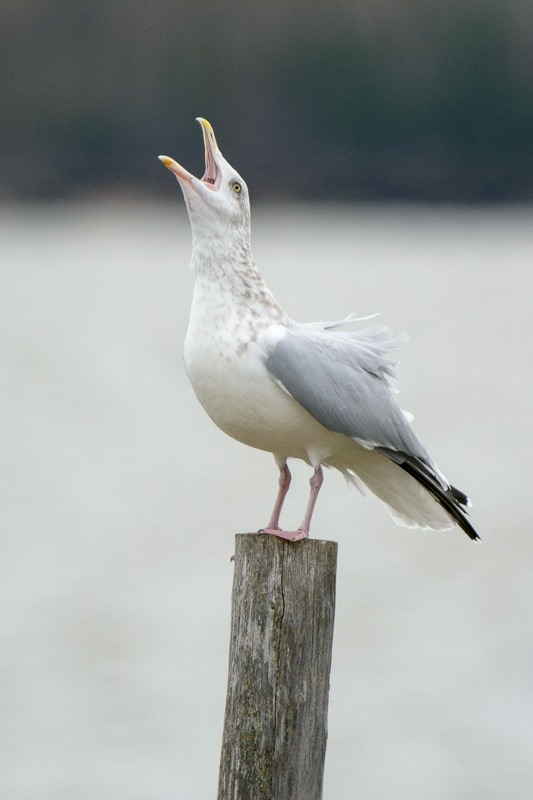 After a while I got hungry. Around 10am, no breakfast and up since 5, I started to feel (and hear) my stomach. From eagles, my attention went to gulls near a place that was serving breakfast. We had to wait a bit before the owner opened the place and we could get in, ravenous. Once breakfast was over, we decided to go back to the eagles and see what else we could get from the situation. 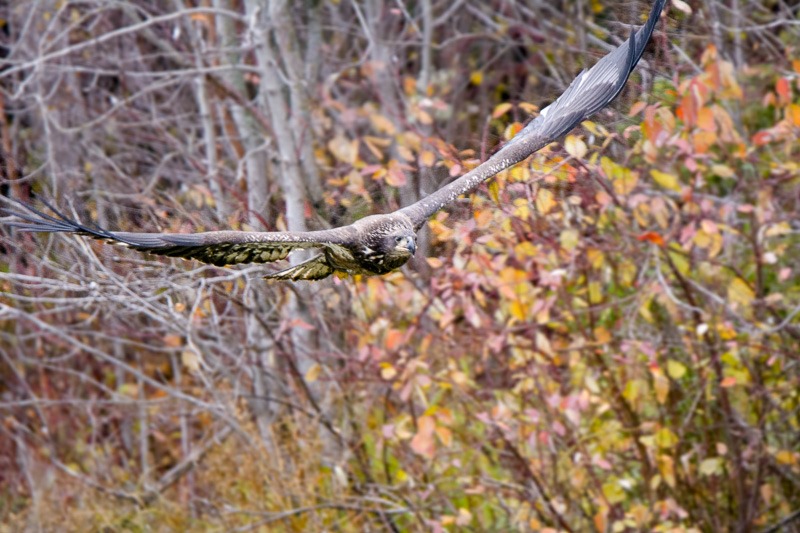 I tried a few birds in flight, the sky was a little clearer in the afternoon. Not enough to get a money shot every time, though. Walking to a different place, an abandoned cottage near the lake, we came across these Ruffed Grouse. A first for me, not bad for a day of shooting 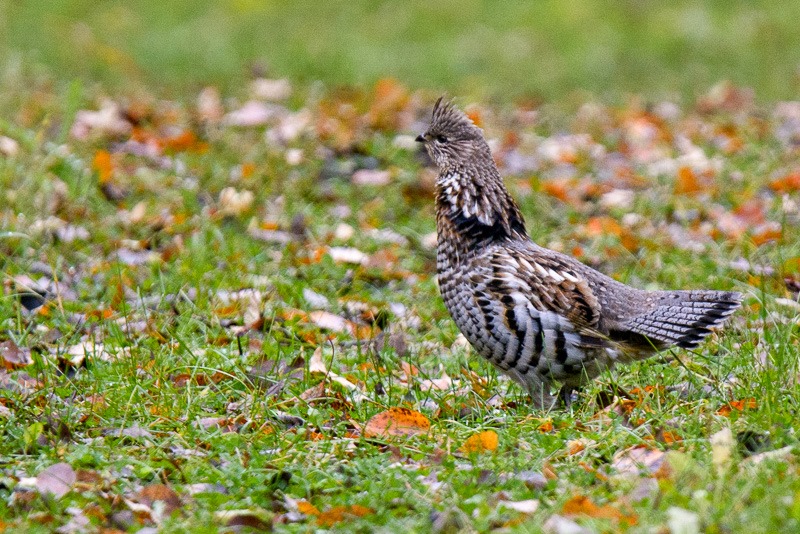 The ruffed Grouse didn’t seem to mind us much, until we started pointing the cameras at them. Apparently they are tasty and they know it. Anyway a beautiful bird, tasty or not. Then we went back to our main goal of the day. 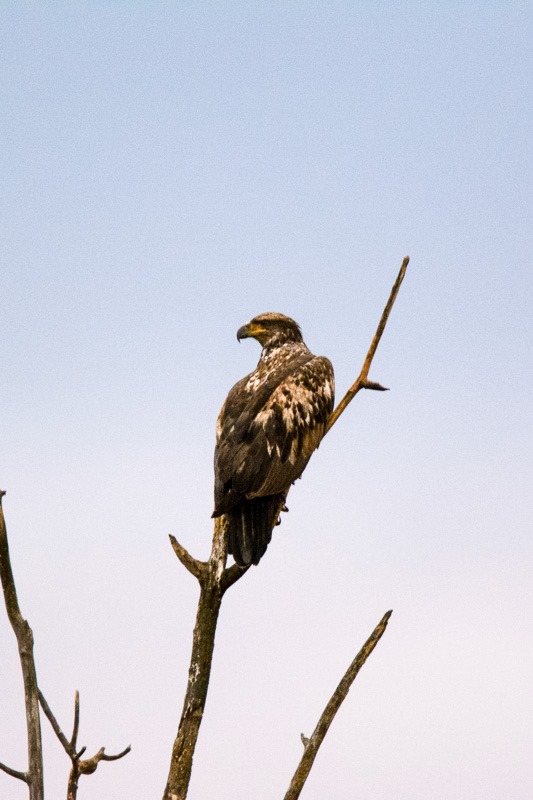 I have my doubts about all of these birds being Bald Eagles, but for now I have no proof that some of them are Golden Eagles. They look like Juveniles to me. 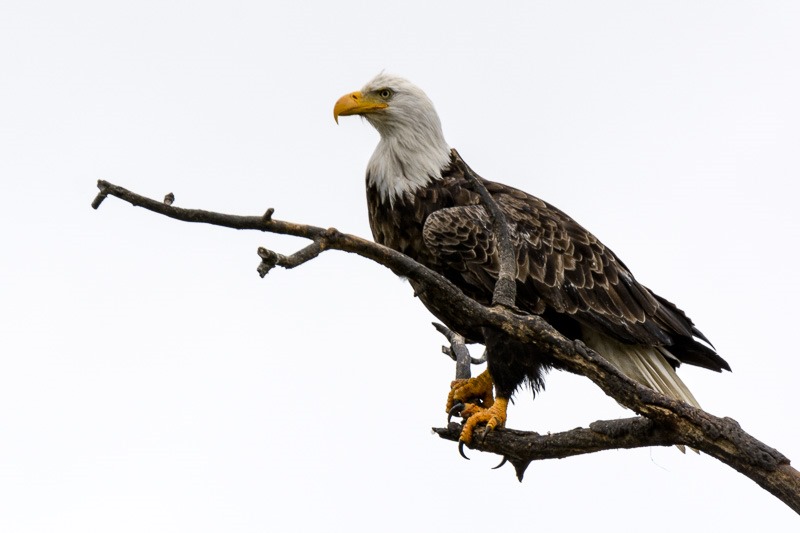 At least the adults are readily identified

. Again, that bleak sky was back and “ruined” our shots in some way. It would be easy to photoshop a different background in there, but that has never been my idea of showing nature. It is what it is. 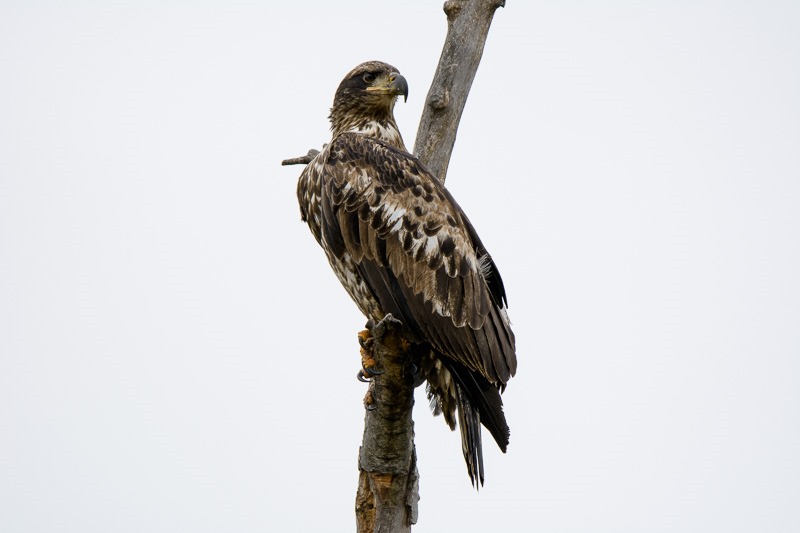 After a while, even the eagles went back to places we could not reach with our car. So we left too, returning home after hundreds of shots of only a few species of birds and a hearty brunch. Not bad for a day in the wilderness of Manitoba. I think we will be doing this again in the near future. If anyone is interested in joining us, make yourself heard!