Many times I hear from professional photographers that you have to have some kind of symmetry in your pictures. Why? "Well, it is better” is the answer. To what is better or not in my pictures I have no answer. I am not an art photographer, although some of my pictures hang on people’s walls. I try to record what I see and what moves me somehow. 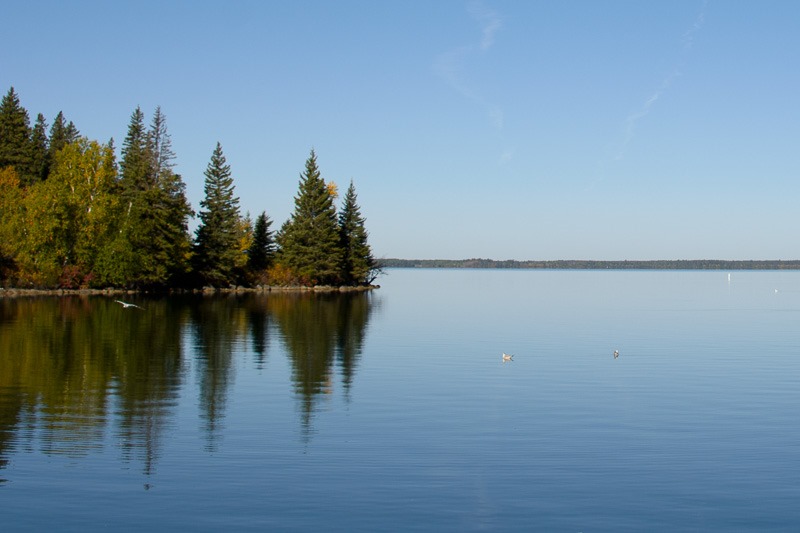 I believe that if I don’t have a story or some mood for a picture, the picture will usually not see the light of day outside my Lightroom catalogue. Believe me, I have lots of pictures in there. But sometimes, just sometimes, the picture is good enough to be shown for one reason or another. Often it is to illustrate a story, not so often it is the picture that induces the mood.

When I went with a number of friends and photographers into Riding Mountain National Park, I had no idea what I would find. I was hoping for some big wildlife. I found none. Usually I then fall back on the medium sized wildlife I have close at hand, namely the other photographers. But on this occasion, the whole weekend kept presenting other kinds of pictures. 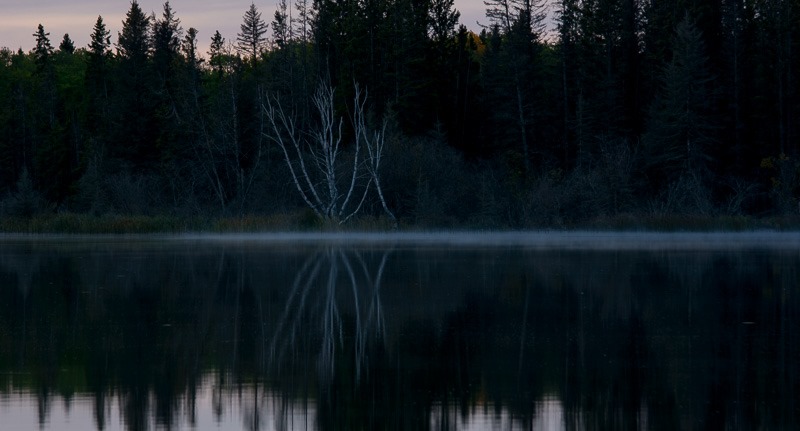 When we all got up early in the morning to shoot a sunrise over Lake Katherine, I had no idea that the place was putting me in a very quiet mood. The last time I was there was in winter, where the only sound I could hear for miles around was the beating of my own heart. Skiing tends to do that to me 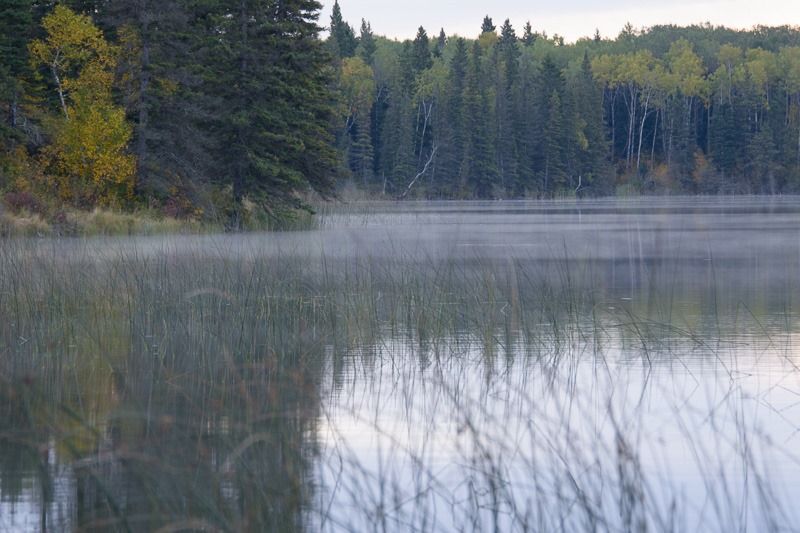 This time the water was liquid and nearly perfectly still. The sun hadn’t come over the horizon yet and nobody or his dog had the bright idea to jump in the water..A quiet little mist floated over the surface and enhanced the mood of complete quietness. 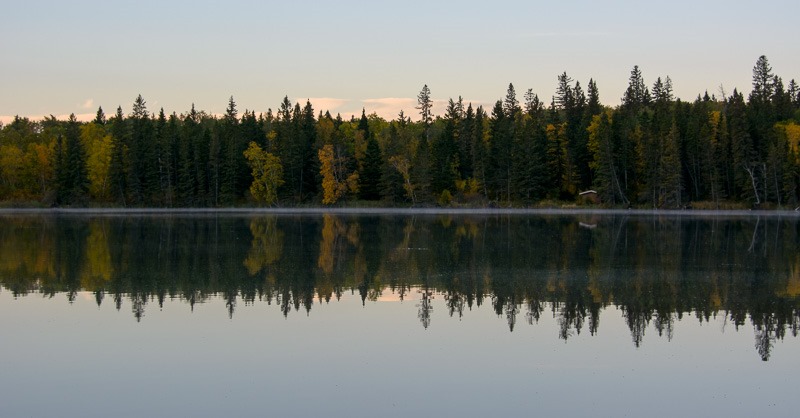 Even most of the photographers kept quiet, which was a miracle all by itself, given the group

. While the shots taken were not completely symmetrical, after a little cropping the pictures became a reflection of the mood of that early morning. 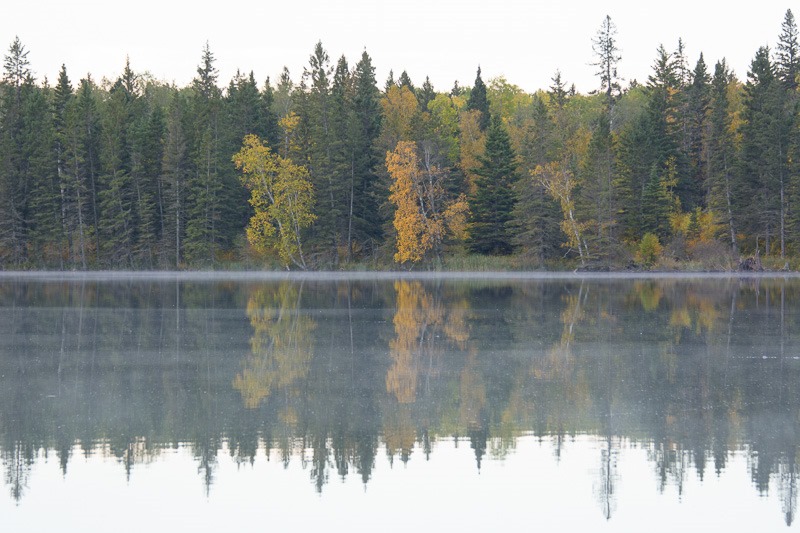 When the light became stronger, the same picture, or nearly the same picture showed a different mood, more, how shall I say festive, less solemn. All the while retaining the calm spirit of the place. When I say that even the photographers were quiet, I just don’t know if that was because of the quiet feeling of the morning or if it was just the early morning before coffee. I guess I will never know 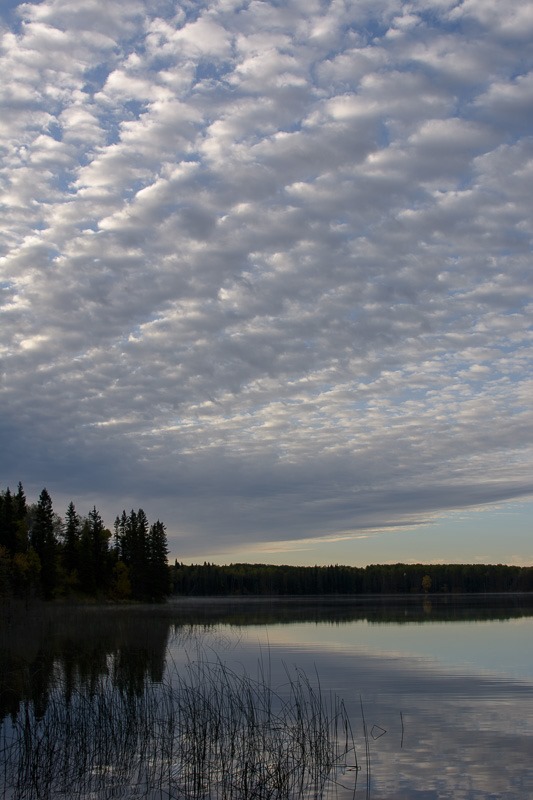 We came to the place to do a sunrise shoot, but the clouds decided to cheat us out of the sunrise itself. Some were not happy with that, but I decided to shoot the offending clouds instead. Just to spite them. And while not completely symmetrical, the picture definitely breathes quietness and serenity. A mood we don’t get too often to experience in this hectic world we live in today. 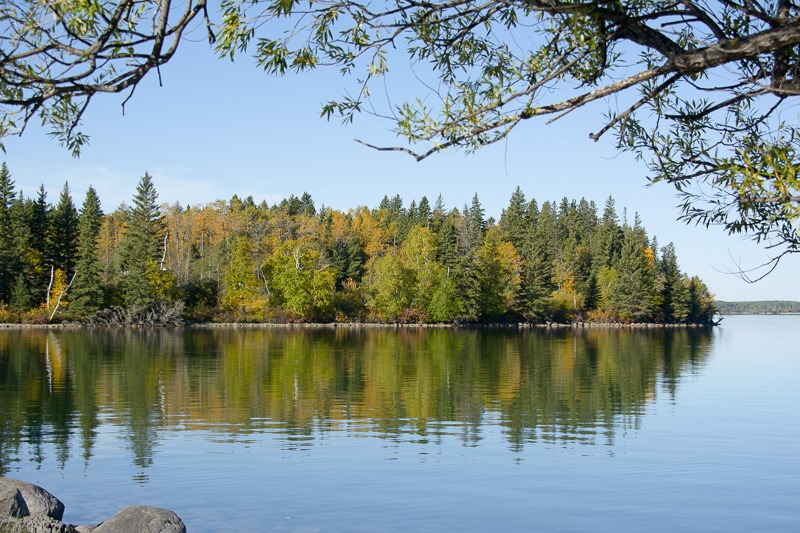 The lead picture of this post was taken the evening before, on the shores of Clear Lake, in the same Riding Mountain National Park. It was on a pier where anyone could walk around, and lots of people did. Many of them were not photographers, some even came for some advice on how to shoot with their own camera. I guess that is a Canadian thing. In Europe you would usually get a grunting sound as an answer, indicating that you’d better move along. Here we answered the questions and gave away some tips on how to make their pictures a bit more interesting or different. Another kind of symmetry, I think. 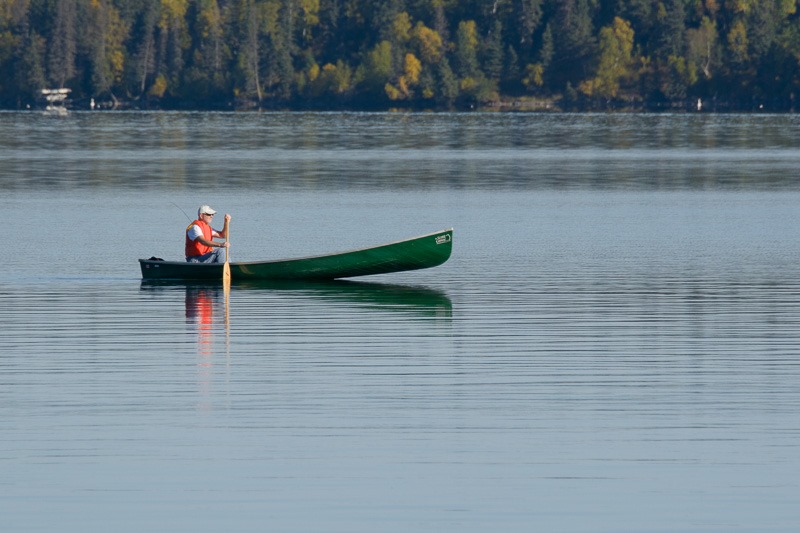 The symmetry you get when you reflect upon others what you want to see yourself. It’s a nice feeling that complete strangers get something out of your advice and walk away happier than before. Other people don’t need advice, their mood is determined by the place where they put them in themselves. I guess that paddling over a lake is kind of soothing, albeit not on the muscles in the arms…

As far as I am concerned, the picture is soothing enough. 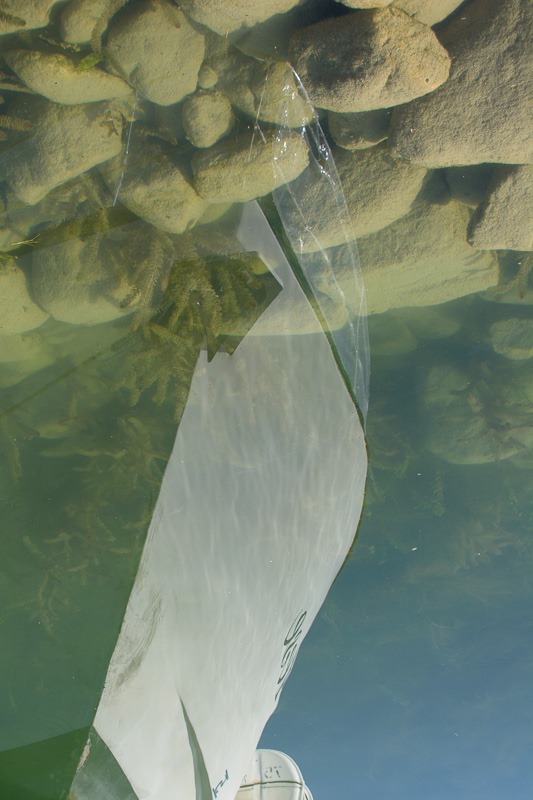 Then I came across this little gem. Simply bow of the Martese, the boat that is providing trips across Clear Lake. With a little bit of mind bending the picture becomes more than a simple shot of a reflection.

All in all, moods, reflections and symmetry go together in photography. They will enhance the pictures, no doubt. But at the same time I am not going to make it a mantra, all pictures must have symmetry and mood. Sometimes, a simple picture is enough.