A few days ago we wanted to get out of the city, out of the near neighbourhood of the city. Into the wilderness, so to speak. With Winnipeg as a starting point that always includes a fair amount of driving to get somewhere. Be it Riding Mountain National Park or the Whiteshell Provincial Park, driving a lot remains part of the trip. Nopiming Provincial Park is the same, just in a different direction. 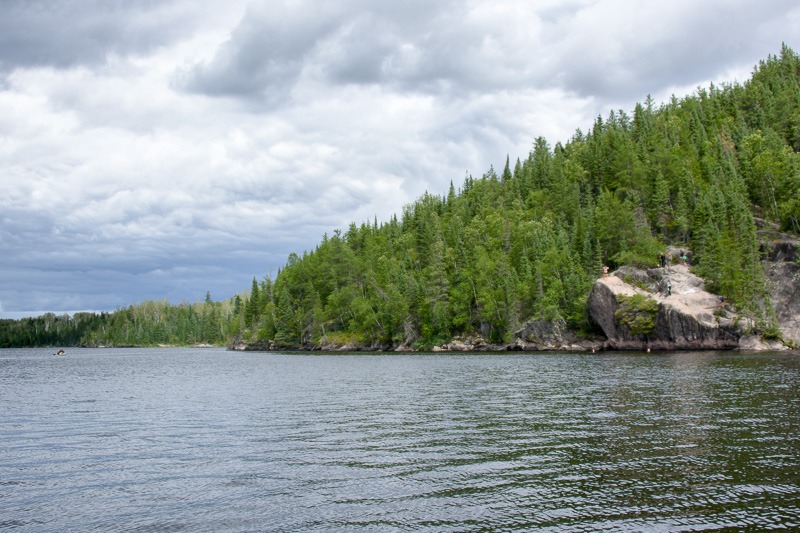 We started relatively early in the morning, with the heat already building up. On the road to Nopiming, the sky grew more and more cloudy. Little did we know that those clouds were the outskirts of the tornado-like weather they had in Ontario that day. The only weather we got was cloudy and a little rain.

Nopiming Provincial Park is part of the Canadian Shield. The Canadian Shield refers to the exposed portion of the continental crust underlying North America. The crust, also known as the North American Craton, consists of rock from the Archean and Proterozoic eons and extends from Mexico to Greenland. The Canadian portion runs from central Ontario north to the Arctic Archipelago, and fromLabrador west to the Northwest Territories. The Shield includes some of the oldest rocks on Earth (possibly more than 4 billion years old). 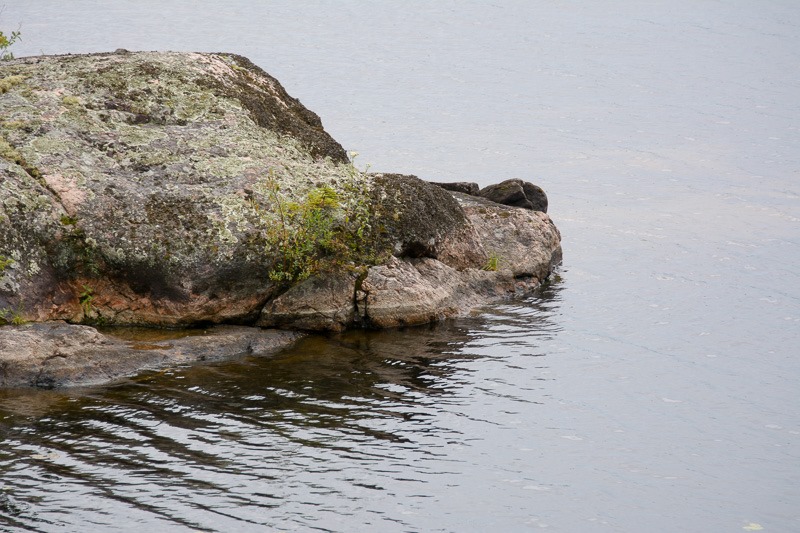 The head of the turtle

Quite the age, so to speak. If you are sensitive to that kind of thing, you can feel the age of the territory in the atmosphere. In some cases, the reflected heat from the sunshine can make you dizzy and will increase your belief that here is a special place, walked upon by the spirits and the gods. Many First Nation people believe that this is  the place called Turtle Island. Looking at the above picture, I can believe that too 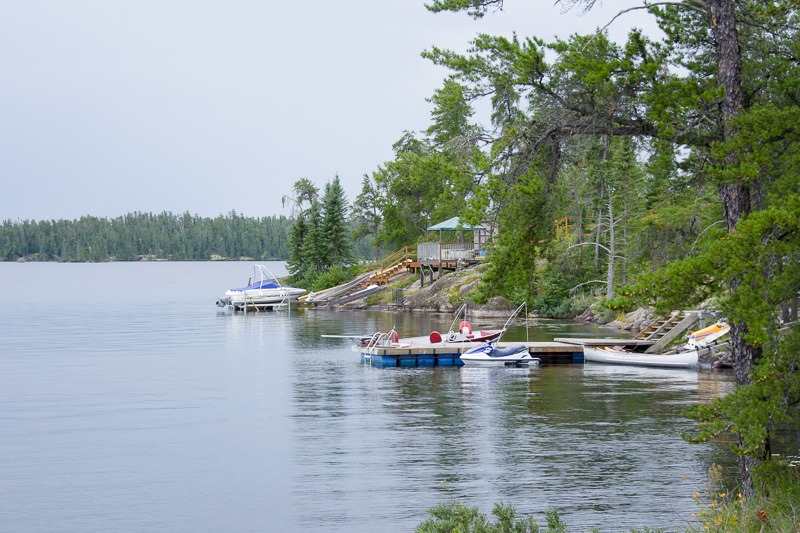 The weather was overcast, as I already stated. Sunshine was rare and so most of my pictures will have a bit of a dull look over them. People were also not going onto the lake. A slight rain had made them move under an awning of some kind. I could hear them, but they remained invisible. The place here is Davidson Lake, a nice place to have a cottage if you ask me… 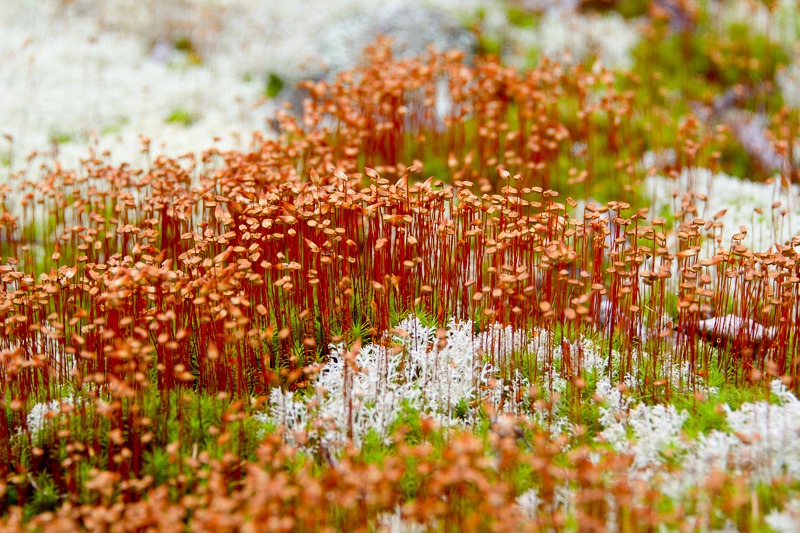 A little walk around (mosquitoes were at their finest here) revealed this tiny fairy “forest” on the ground. Those red “trees” are merely 2 inches high. If someone can point me in the direction of their identification, I would be most obliged 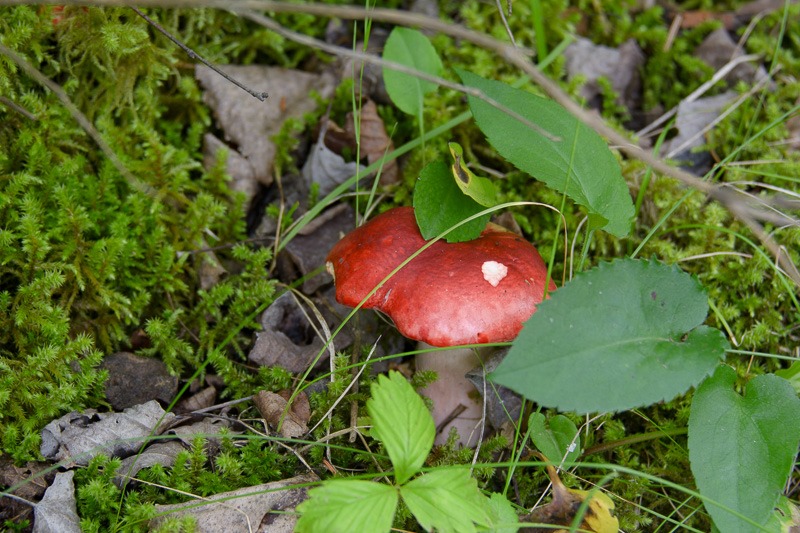 Agaric of some kind

The fact that the sunshine was not at its harshest since the beginning of the day may have had as result that some mushrooms thought it was time to show their hats. This one looks strangely like a Fly Agaric, but it lacks the white spots on the top. I wouldn’t venture into a more serious ID here. It reminds me of an afternoon of “shrooming” with a friend. She was adamant that the mushrooms we picked were safe and tasty. Except for a tiny, faint ring that looked suspicious. So I went to a pharmacist to get a final verdict. He told me that the mushroom was not so tasty and that eating only one of them would have made me sick for about 3 days. I eagerly threw away the four large bags we had picked that afternoon… 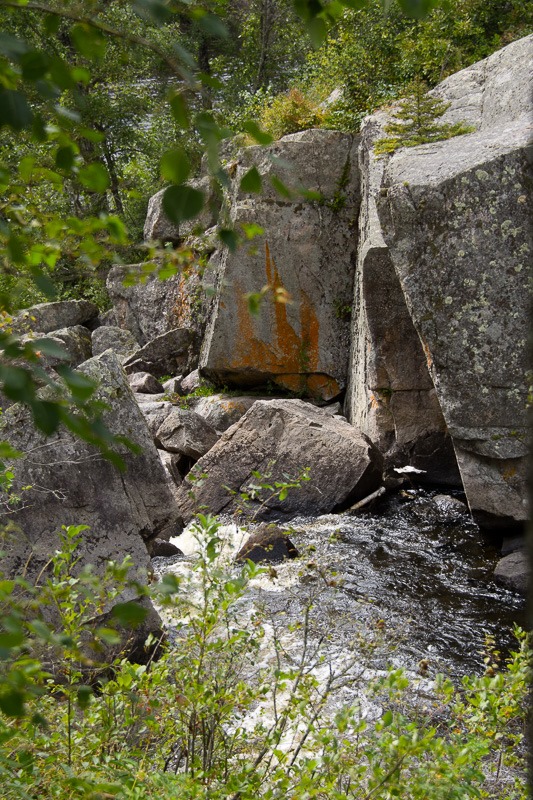 Then I heard some water rushing. I remember this from earlier holidays as being rapids in a river. But no rapids were to be seen. Just heard. A look over the edge of the path we were walking on revealed that a little stream was rushing between rocks down below. We had hit the Tulabi Falls in the Nopiming Provincial Park. 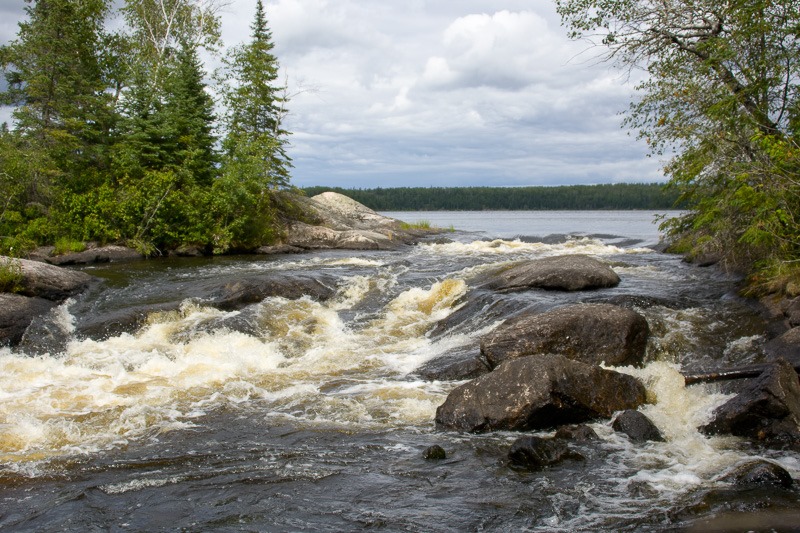 This is where Tulabi Lake spills into Bird Lake through a narrow opening in the rocks. At first I thought I could only get the usual “holiday shots” where all the water drops seem frozen in time. No tripod at hand and no Neutral Density filter made for a difficult situation to get something a bit more interesting. 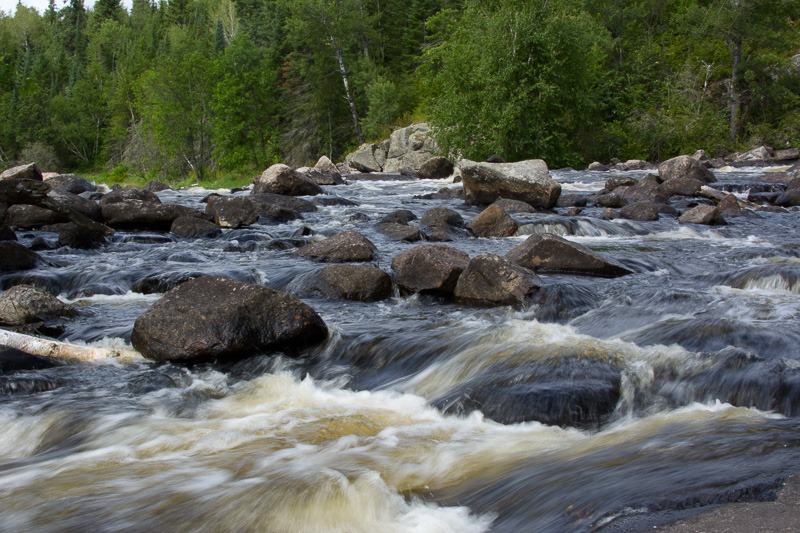 Happily I have a fairly steady hand and can handhold a camera up until 1/15th of a second without a problem. Image Stabilization does help, though

. Even if this water is not as silky smooth as I would have wanted, the flow of the water is now really visible and I am happy with the shot (it can remain in my Lightroom Catalogue).

After this last shot we went back to the car, hit the road and returned to Winnipeg by the end of the day. All in all a nice day out of the bustle of the city and not onto a crowded beach