Black Bear Island, an uninhabited island in the middle of Lake Winnipeg. The day we went there to scout out the possibilities for a photo shooting weekend, we were overwhelmed. Overwhelmed with the sheer number of shots one could take of this undisturbed place. 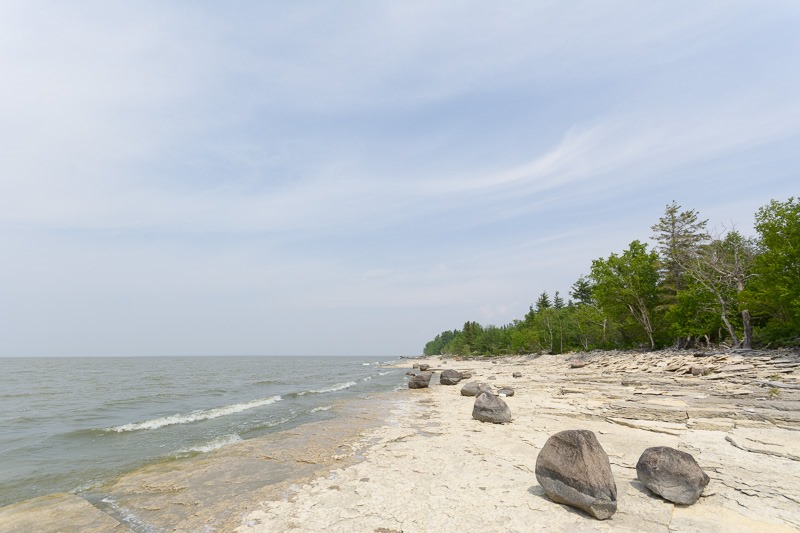 Imagine a place where nobody ever walks, there is no trash from previous visitors, apart from the “usual” flotsam thrown on the shores by the wind. Broken tree stumps, branches and such.

The wildlife does know about people, so they are still a little wary about us, but nothing to be concerned about. The American White Pelicans are not disturbed at all by our presence. 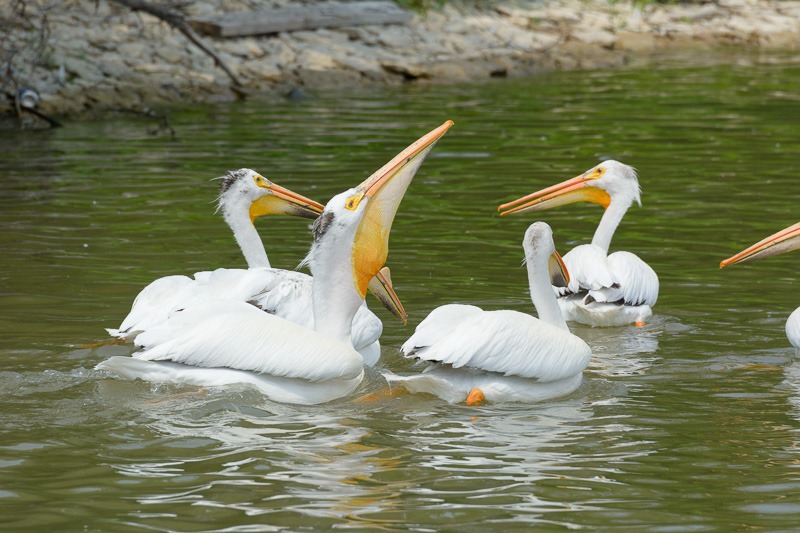 American White Pelican, “down the hatch”

Pictures galore of the pelicans.

Commercial fishing does happen on the island, and nets are being cleaned there as well. Usually I would not recommend this as an attraction, who likes thrown-away fish? But here is the thing, birds do like that fish and it is an easy meal for them. Instead of having to go fish for it themselves, it is handed to them on a plate.

As a result of this, the pelicans are here by the hundreds, and in fall (September-October) the American Bald Eagles come here by the hundreds to get that good meal of fish they need for their trek south. The eagles stay here until snow covers the ground, so lots of time to go and photograph them. I will talk about them in a future post. 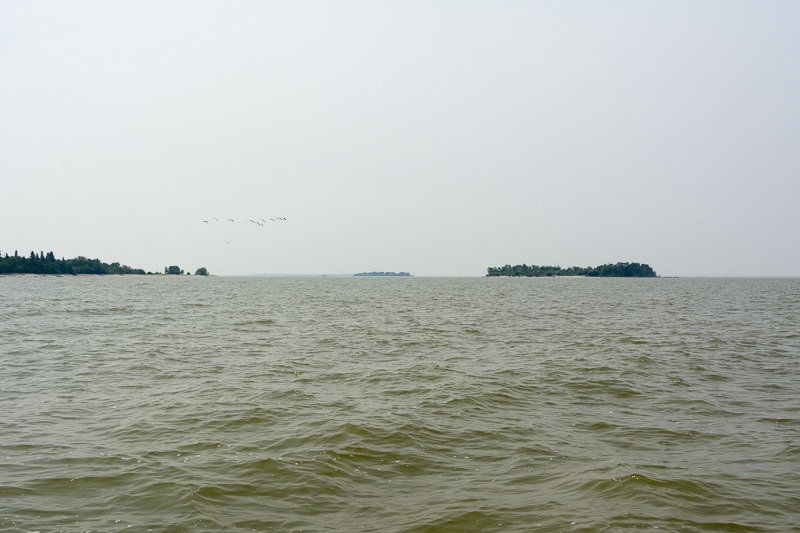 Black Bear on the left, Cub Island on the right

Nearby islands are also a safe haven for the birds, the next island is Cub Island, a mere rock covered in bushes, trees and birds. We will not be going there, although it is quite possible with an experienced skipper of these waters. As you can see rocks on the shore, they are also under the surface and have sunk many an unsuspecting boat. As a result, the islands remain mostly uninhabited and undisturbed. 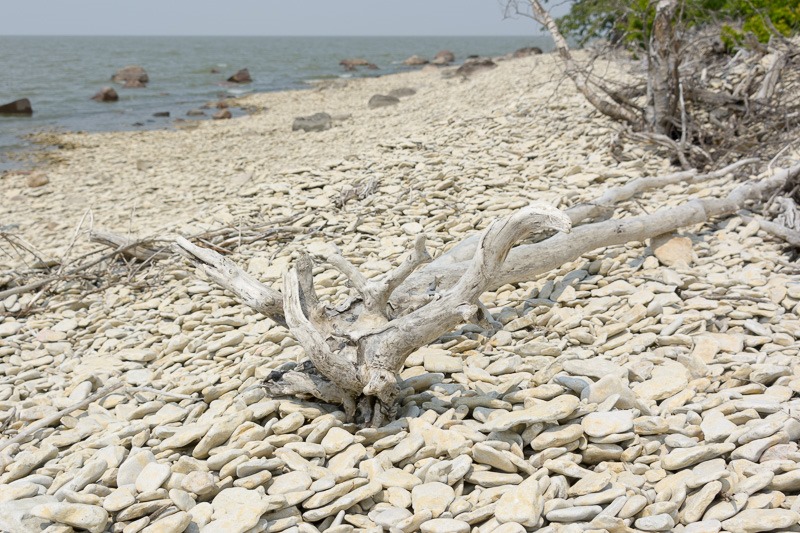 Rocky beaches offer all kinds of opportunities for photography. While some people pay for a dead tree stump in their yard as an ornament, here they are freely lying on the beach. Nobody comes and gets them

. Looking at this pebble beach and the size of those “pebbles” the wind will do a decent job here most of the time. No fine sand on this beach! The day we were here to scout the island, the weather was extremely calm and, unfortunately for us, the sky was hazy with the smoke from the forest fires up north. 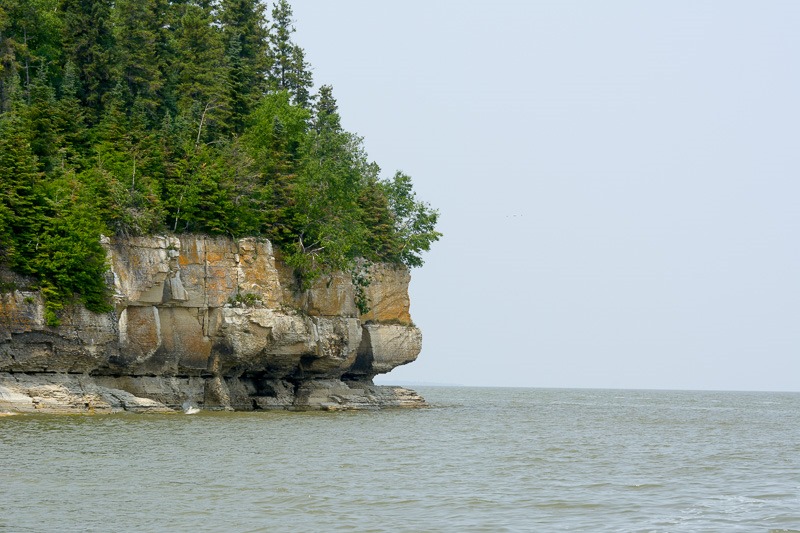 The extremities of the island have been scraped by water, wind and ice for thousands of years, allowing the hardest rock to stay in place. While we can get close to them from the water, there is no way we can safely climb the cliffs for a unique picture. Pity but true. 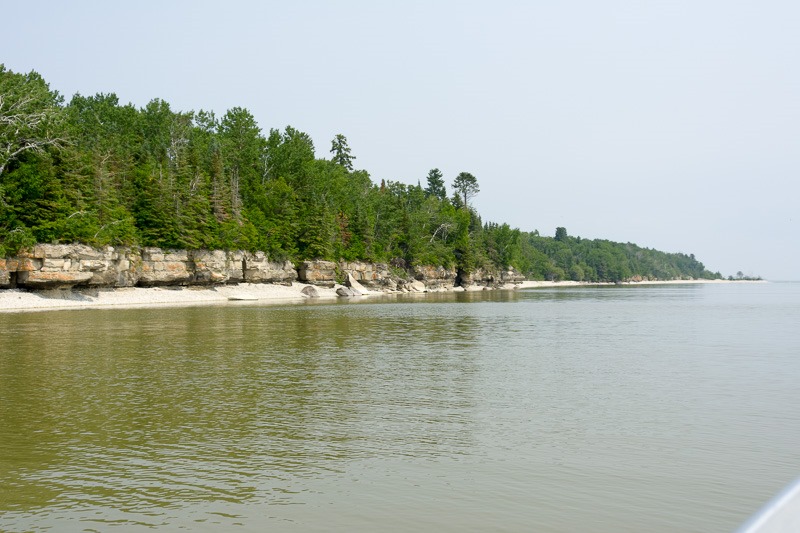 Some places look like we could land there, but the boat we had was too big to land on that tiny part of the island. The caves in the limestone, cut out by water and wind must be really something to explore on a different occasion. 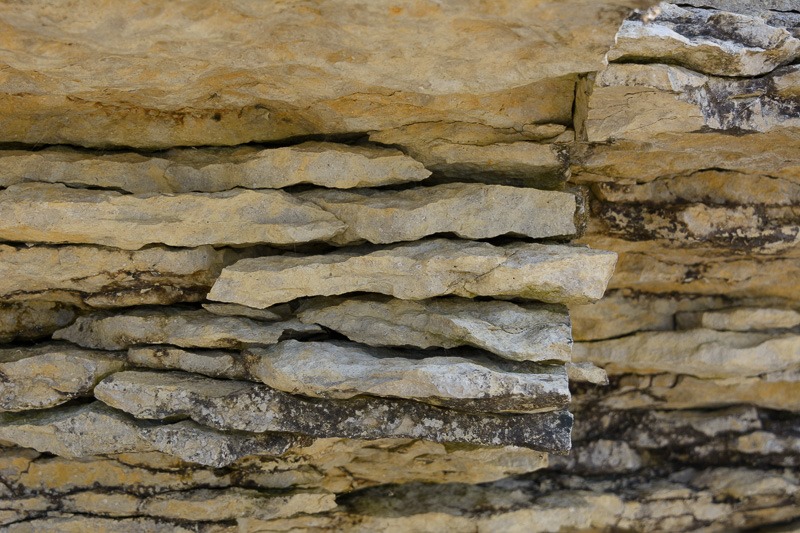 From far away, the rocks look like one massive piece of stone, but up close, those same rocks present a different aspect. Broken into small pieces, slates of the rock have been hollowed out while other, harder parts have remained in place. Just imagine the sheer number of fossils that are caught in those limestone rocks, just waiting to be discovered and photographed. 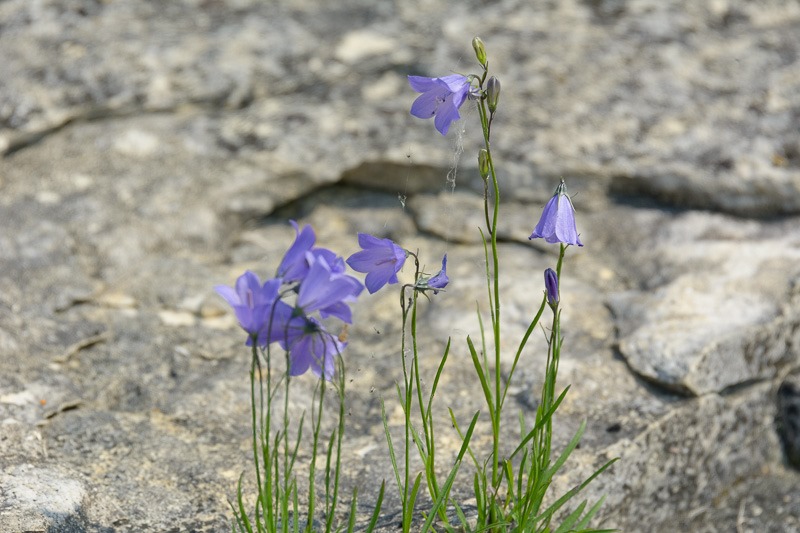 Harebell, indigenous to the island

One thing I have not yet talked about is the vegetation of the island. There are only two known trails on the island, one an easy path that we took to get on the rocky beach. The other has not seen a human foot for decades. The vegetation on the island is seriously dense and one would need a machete to get through that jungle. And there I have a problem. While I would give a lot to see what that vegetation hides, I am not prepared to cut a swath through it just for curiosity.

For now I will stick to the smaller vegetation on the beaches and on the fringes of this Manitoban Jungle.

Soon we will be organising short weekend trips for “locals” from Manitoba, Saskatchewan and Ontario as well as longer trips for people that come from further away. Stay tuned, the plans have been made, execution of them is close!