I haven’t seen many auroras this season. Of what I saw, nothing was really worth writing about. With a lot of effort I assembled enough pictures of a series of mediocre aurora displays to make a post on this blog. While I was doing that, someone on Facebook started talking about a huge display at 5:30am… Sure enough, another night of fierce aurora display had gone by in my sleep. 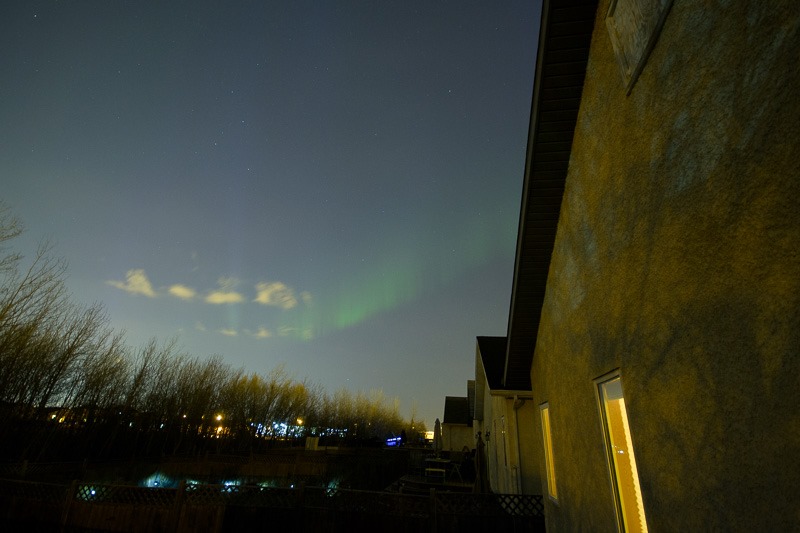 The following day, the aurora displays kept showing red in the forecasts, so in the evening I wanted to have a look for myself. A shot from my yard revealed aurora from within the city limits! Red alert!

I prepared some material in a hurry and left around 10:30 in the evening to try and catch some of the beauty. Already from inside the car it was clear that the display was pretty strong that night. When we arrived at the marsh, a simple green band lit the sky, something you can get on many nights here in Manitoba. 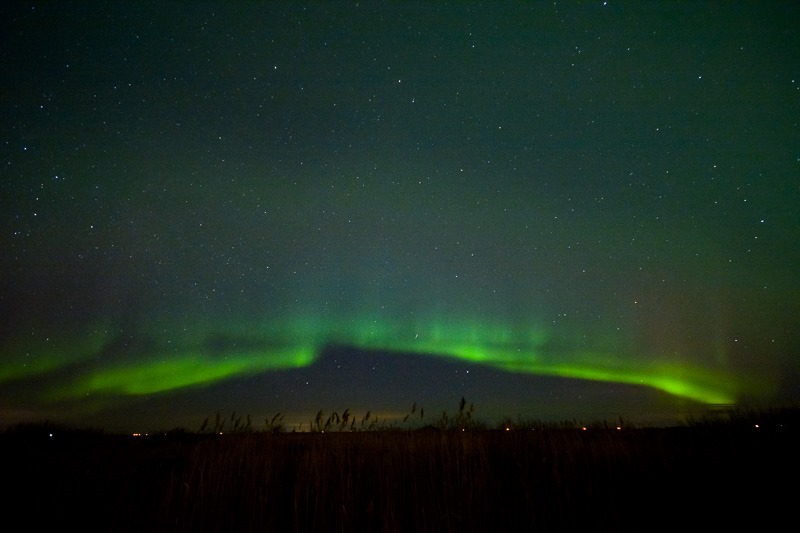 We decided to stop simply at Oak Hammock Marsh, instead of driving way further up north. With a Kp of 8.66 *anywhere* should be good to view the aurora. On the parking lot of Oak Hammock, the program of activities in the marsh was too brightly lit to get anything useful so we walked a bit into the marsh, making sure we stayed on the paths. 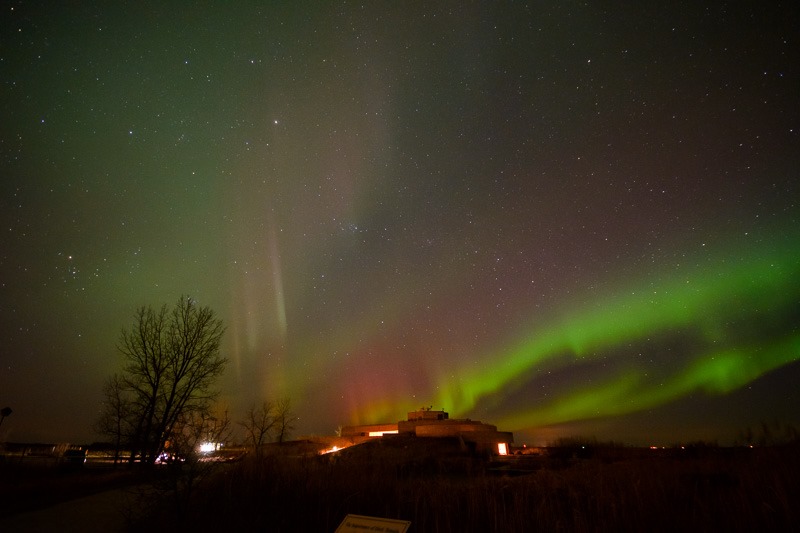 A few days before I had tried to go off the paths and my shoes still remembered that adventure. No need to repeat that

. The interpretive centre was dimly lit, dim enough to function as a foreground in some of the pictures. Many of the pictures have a white-ish kind of hue at the top of the main green light. I have no idea where that comes from, but it is nice in the pictures. 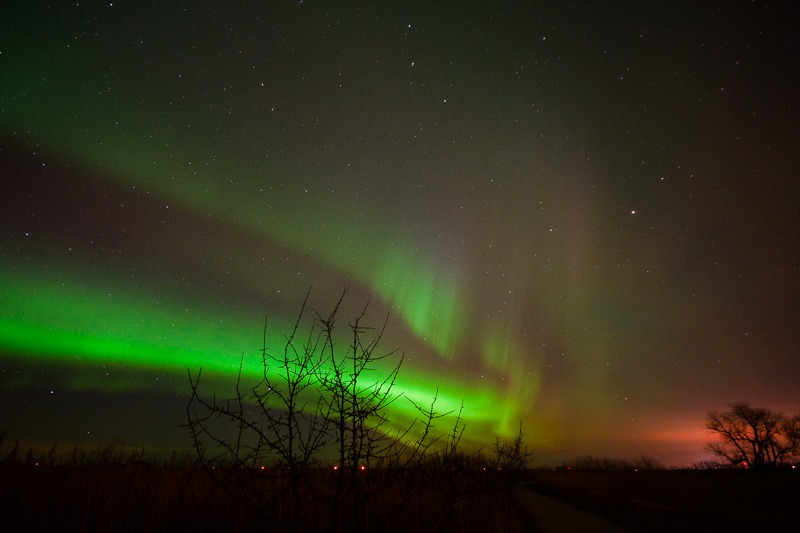 Orange, the nearby city of Selkirk

Then, suddenly the sky turned into a wild sea of greens and purples. It was light enough to read a newspaper, had I taken one. But who takes a newspaper to an aurora display?!? 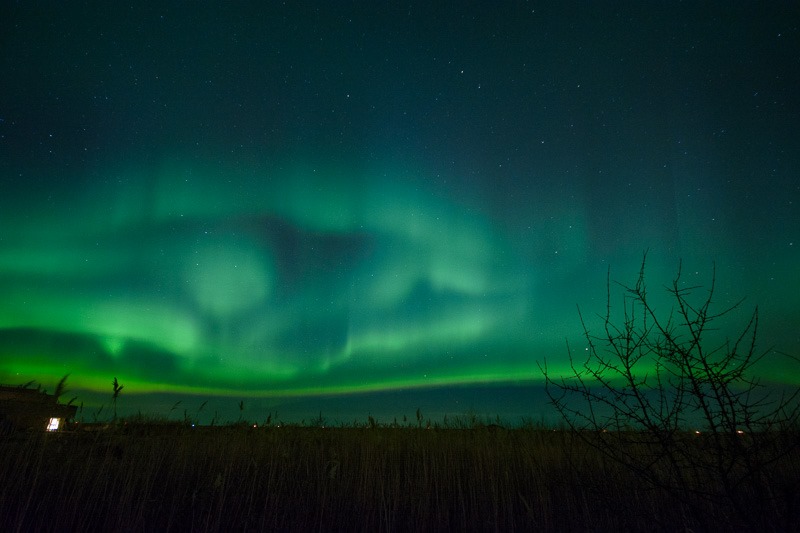 After that, it was a simple clickety-click of the shutters of all our cameras. Some needed to find their settings and a few tryouts were made. I think that even those tryouts will yield usable pictures. 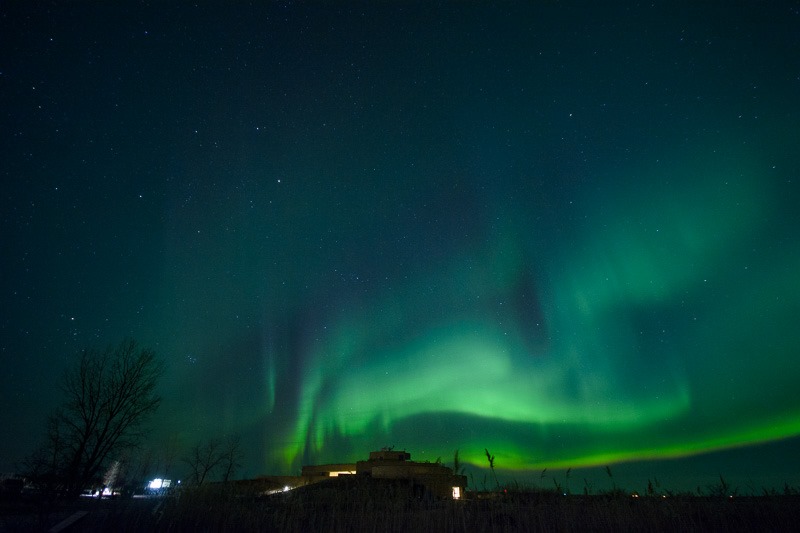 The Interpretive Centre under “attack”

Sky that was quiet at one point became a hellish green at the next. It was enough to disturb the newly arrived Canada Geese, they didn’t sleep for a second. Neither did they shut up 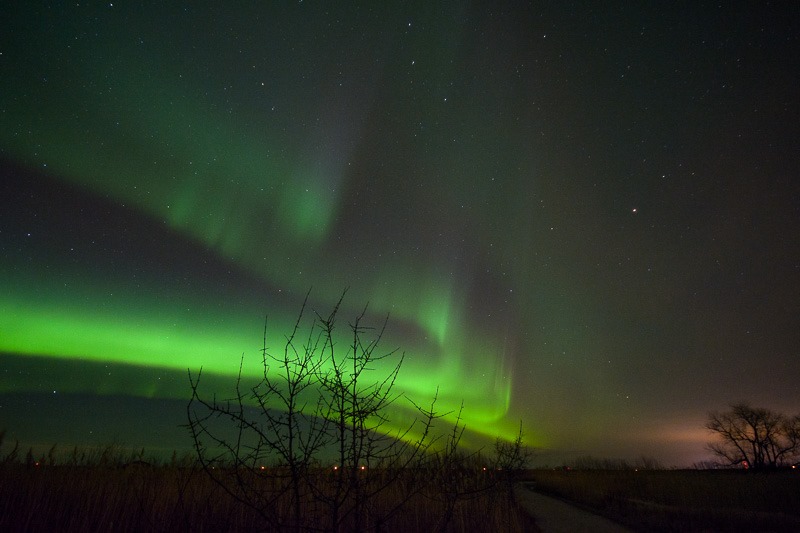 It was an eerie feeling to have the green light at the top, all geese honking. And then a few coyotes joined in. At first I thought they were dogs from some nearby farm, but the direction where those noises came from had no farms… 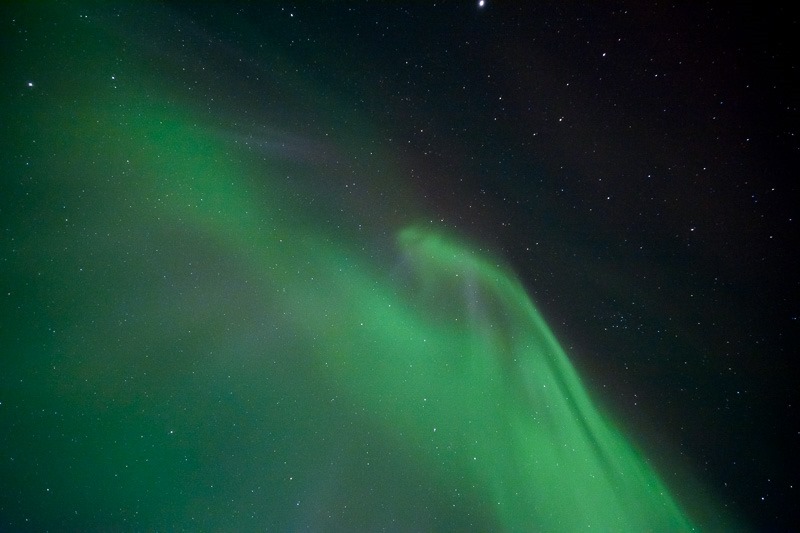 Anyway, the car was not that far away, we could have outrun them. I think. Then I looked straight up and saw that the sky above had also turned a soft green. At one point it looked like a ghost, trying to get to us 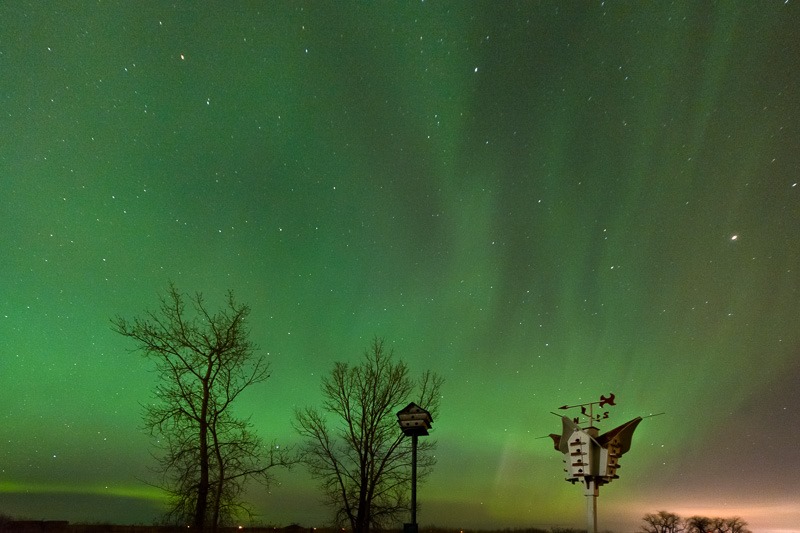 Purple Martin’s house under the greenery

No wonder that the ancient sailors on the Atlantic were afraid of their lives when they saw the aurora for the first time!

So, who could have wished for a greener St. Patrick's Day?