This weekend we went out to Lake Winnipeg. By –7C that should be a pleasure. By now Lake Winnipeg is frozen shut and only the deepest parts still have water underneath. That would be a great place to fish, if you can get an auger long enough to pierce that ice. 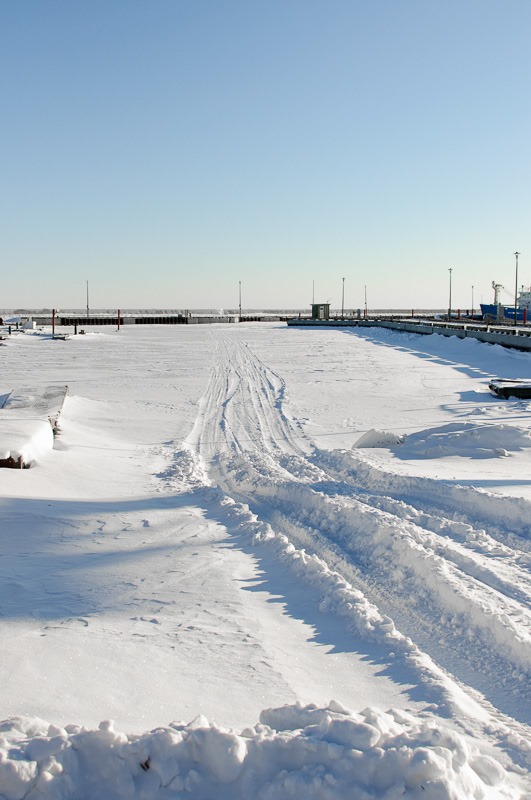 The place to get on the ice with your car is in Gimli Harbour, the ramp for the boats is also usable for truck and cars.

So there we were, on our way to Gimli and on our way to the frozen world of Lake Winnipeg. By –7C I don’t take too much care in what I am wearing, the car is always nice and warm, the windows closed and no wind to be felt. 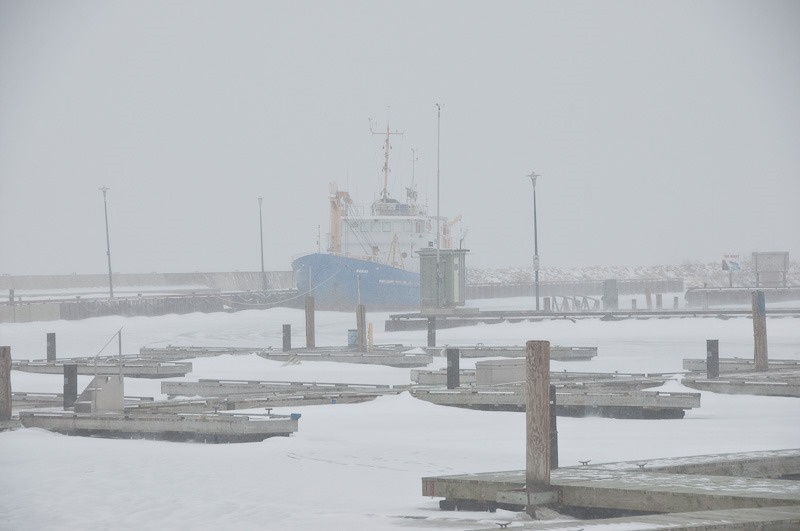 In the harbour, the NAMAO felt quiet and alone. Too big to be hauled out of the water for the winter, she has to stay in the harbour and ride out the cold like in the old days. 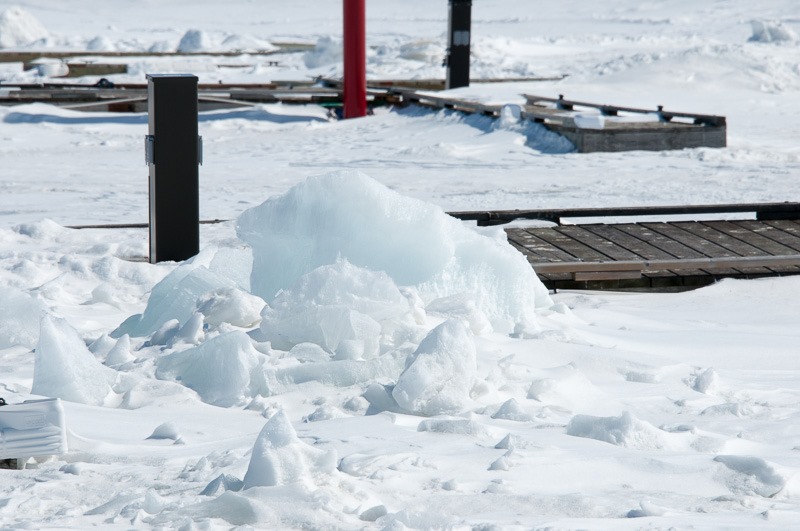 Chunks of ice is all that resides in the harbour here

Once we had found a parking spot in Gimli, the first thing we did was look for a place to eat something, the road had been nice and clean, but also long and hunger-inducing. No ice or snow on any road we were on, unlike previous years where rental cars felt as stable as Crazy Carpets going downhill. 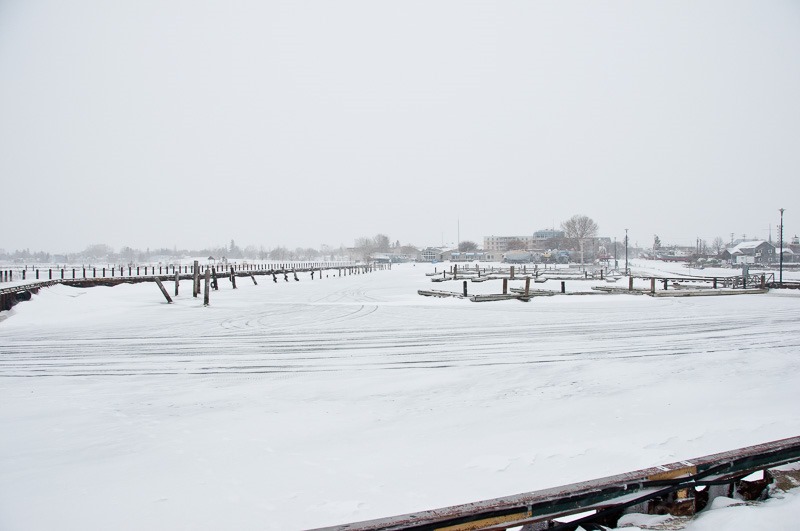 Gimli Harbour, closed but not without activity

No, this time, the trip was smooth and quiet. Not so much for a blue sky, but well, you can’t have ‘em all, eh? The food was good, homemade, they said. I believe them. We’ll be back another time. 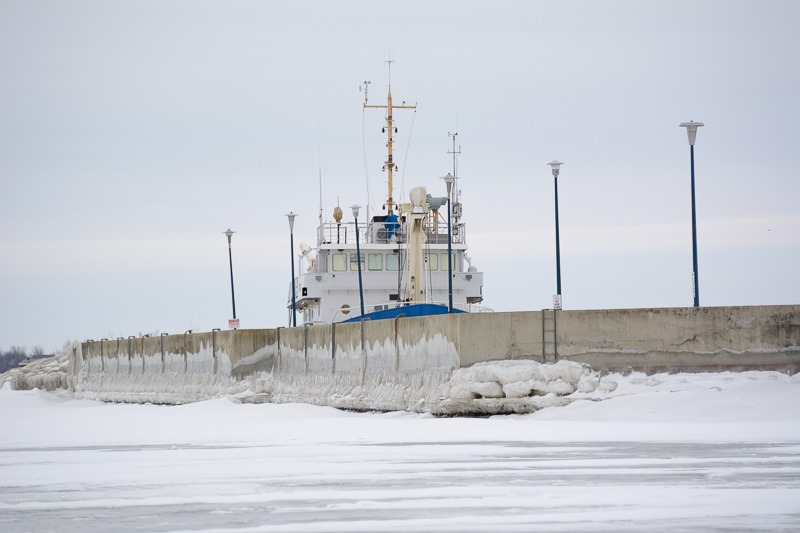 The NAMAO, hiding behind the harbour’s wall

After lunch in a warm place, we decided to go on the lake for a nice little walk, let’s say something like one or two miles out on the ice. The first view from the ice is the ever present NAMAO, this time photographed from a place where you usually can only get with a boat of some kind. It was only a short walk on the ice. 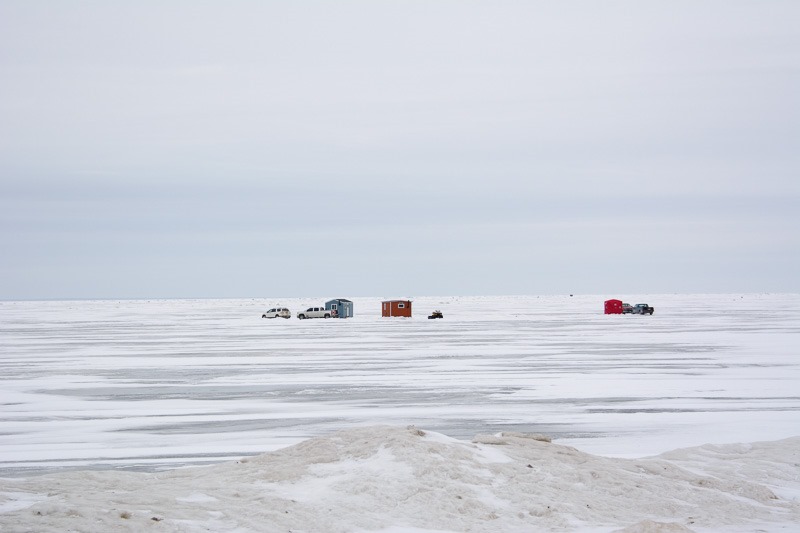 On the other side of the harbour, far out on the ice were the people who really braved the lake and the weather. All for fishing’s sake. The cars used on the ice are all four wheel drives as far as I can see. I wouldn’t want to go there with a simple car, that’s for sure. 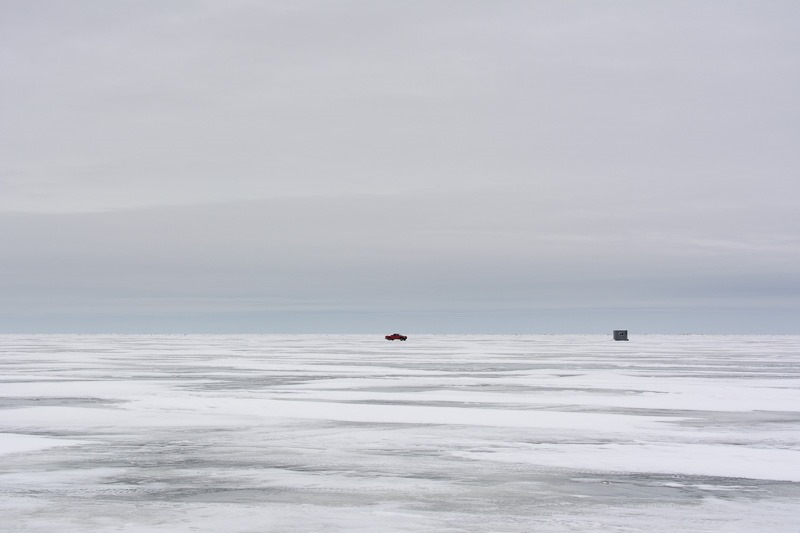 This guy seemed to be on his way to a sanitary rest stop. The conditions must be hard on the ice out there…

So what about those four minutes of the title of this post? Well, with the simple jeans I had on and a small (thinsulate) touque, that was all it took for me to get cold and back to the warm car. At –7C over that mass of ice, the wind felt like it was –30C. Call me a wuss, or whatever you like, but four minutes is all I am willing to provide for that wind to freeze anything freeze-worthy on my body. Next time I will take some warmer clothing.