First one of the year

Sure, there are a lot of firsts in the beginning of a new year. Meh. This was the first outing of the year to The Forks. I haven’t been out shooting for way too long, leaving me also with a lack of pictures to post here on my blog. Going out with a few friends of the Manitoba Foto Friends was a welcome change in this grey monotony. 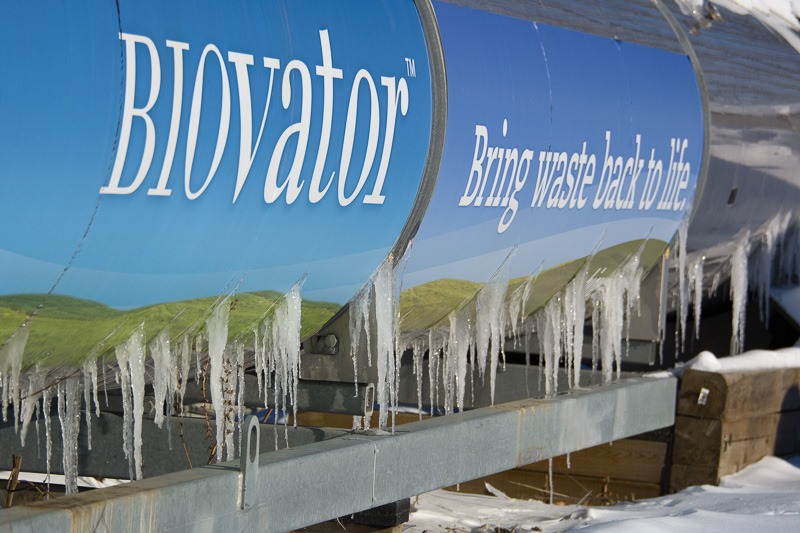 The Forks can still show some unexpected places, even if you have been there a multitude of times.

The skating rink is again in full use. A while ago it was closed for lack of ice. You can’t skate on liquid water. And hey, purists of the physics of skating, don’t interrupt me here… I know we are always skating on liquid water, even by –25C 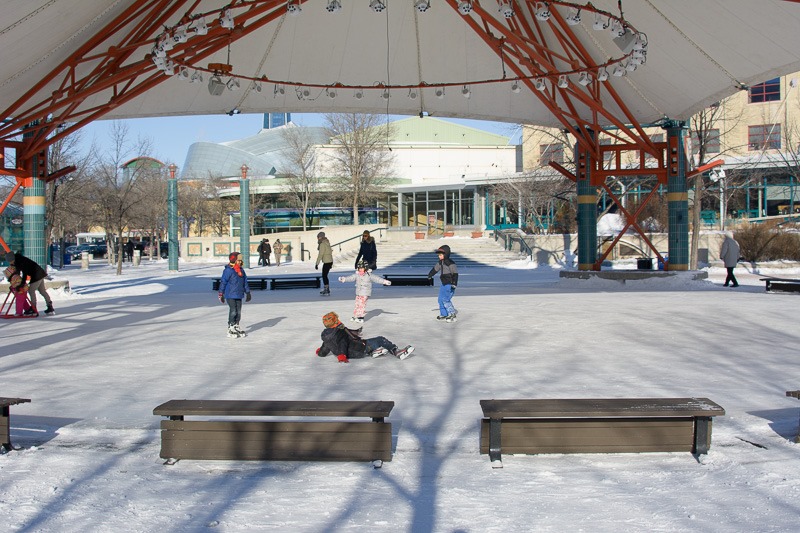 So when we went down to the river, I thought that, as usual, the skating rink on the Assiniboine would be open and a walk towards Hugo or even farther would be possible. Not so this year. The Assiniboine is closed off to the public. 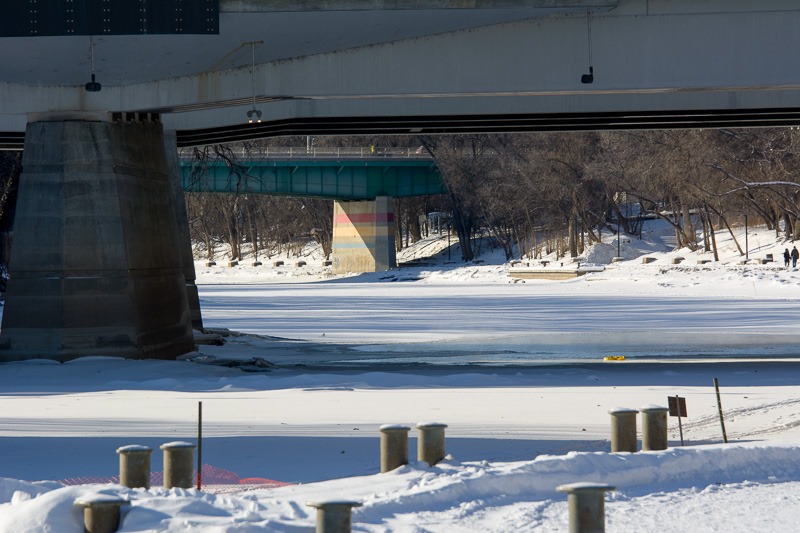 At the same time, some of the ice isn’t even formed yet in the Forks Harbour itself! I was surprised to see that the hardly formed hard skin on the water was still steaming. Ehm, steaming ice anyone? When I was a kid the stores sold “Baked Ice cream”, but that was a gimmick to sell ice cream with a layer of hot chocolate around it. This looks like steaming ice. 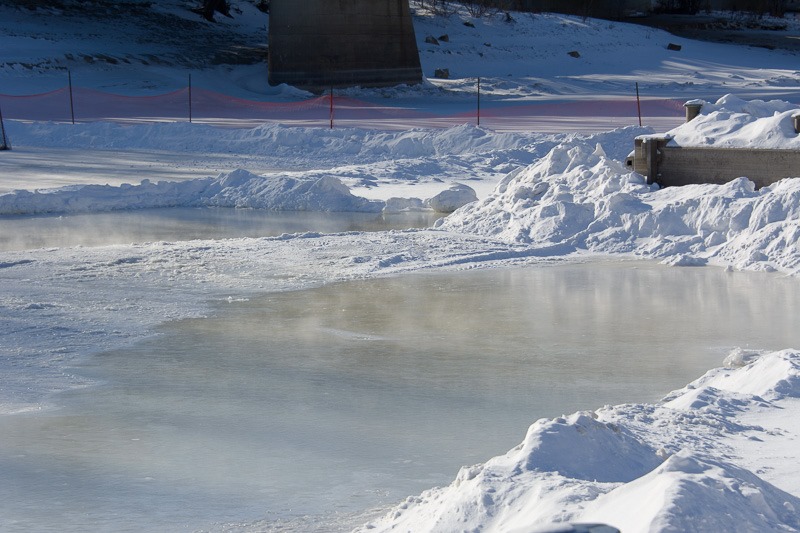 This “puddle” is fully frozen, the water is NOT liquid, but it is still steaming. I have never seen this before. But while I was gaping with an open mouth at that steaming ice, some people were having fun on their bicycles along the river banks. This bike is specially equipped with snow tires. I thought they only made them for cars and trucks… 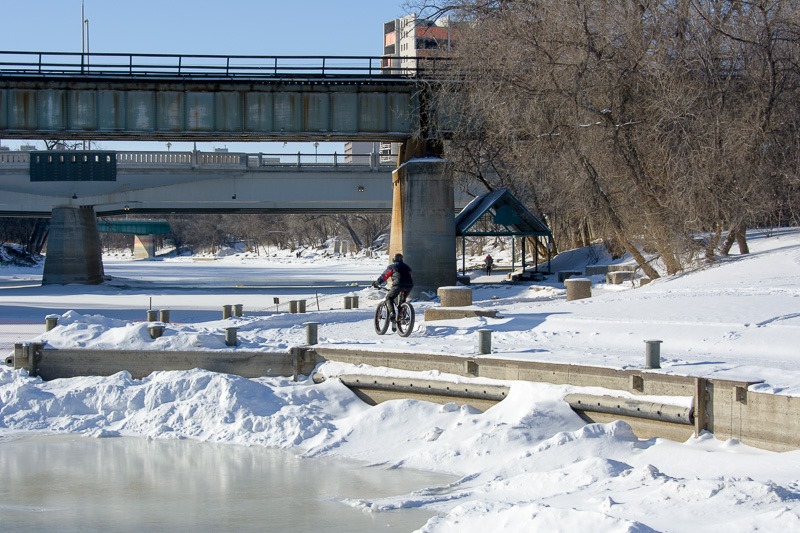 Biking on the banks

Those oversized tires will keep the guy cycling instead of slipping and sliding all over the place. He didn’t go very fast, though

. Other places of the ice were of, let’s say, disputable quality. While the City of Winnipeg always tries to protect its citizens from going through ice and coming to harm, this patch was fully reachable. If I hadn’t looked closely I could have walked there and (perhaps) gone through… 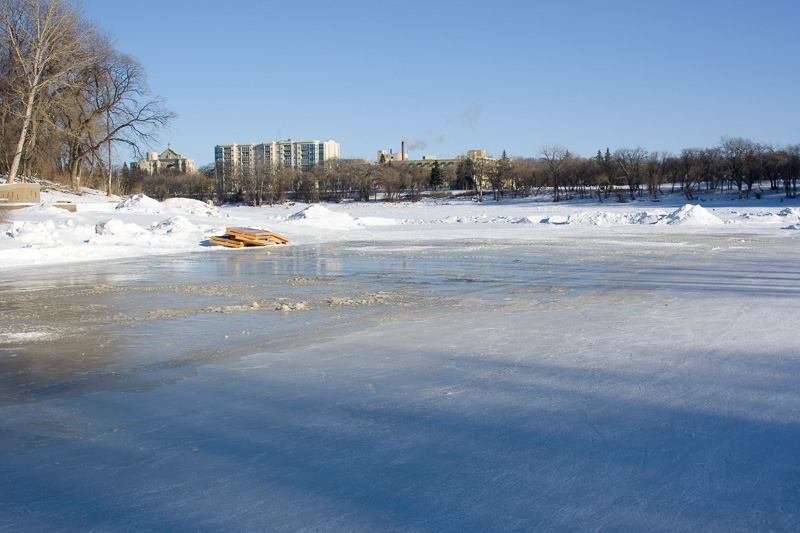 Weakness of the ice

Or perhaps not. It may have been a crack that had let water on the thick ice. Who knows. For once, I was not going to try and find out.

By now my fingers had gone somewhat numb from the cold, manipulating camera buttons with mitts on is not the easiest thing to do, so I had left them off. Stiff fingers and cold extremities are then a fact of life. 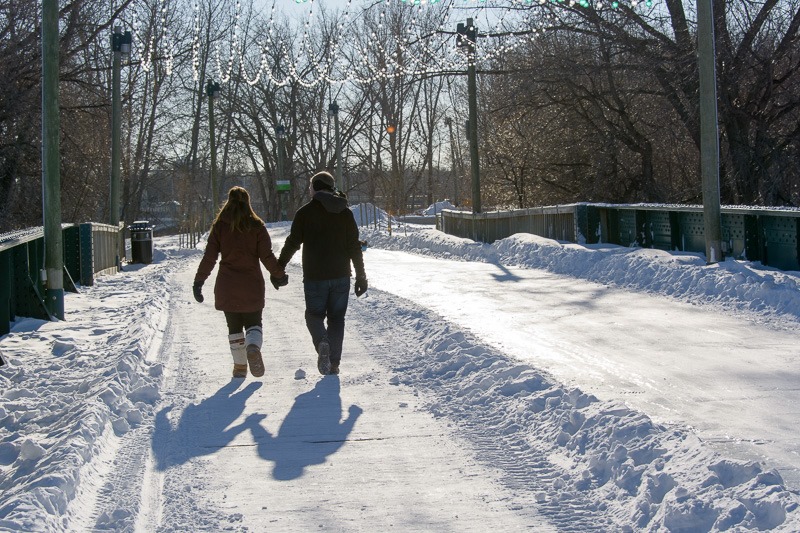 Once we got out of the wind, my hands quickly warmed up again and we went for a walk on the old train bridge, now converted into a skating rink and footpath. These youngsters left a nice shadowy trail, too good to pass up for a picture. 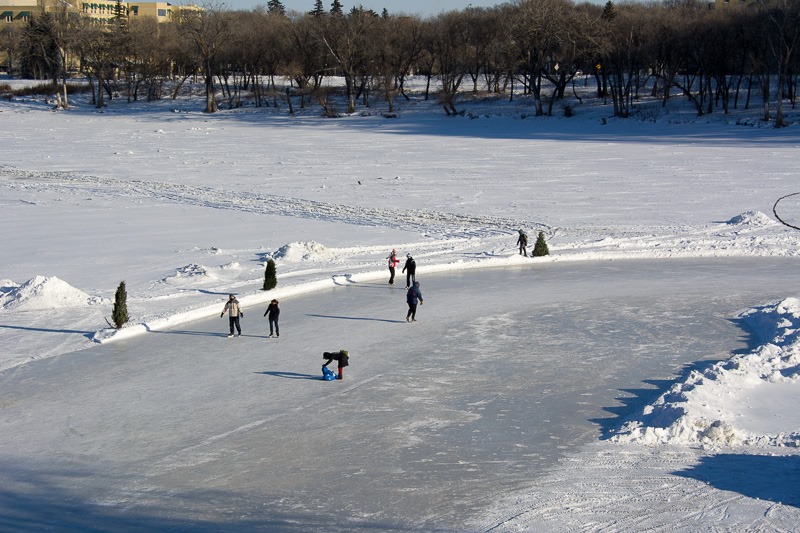 Activities on the ice

From the bridge, the activities on the ice seem far away. Also, they seem pretty insignificant. I guess it was still a bit too cold for most people, although it was a beautiful day to be there and for shooting pictures. 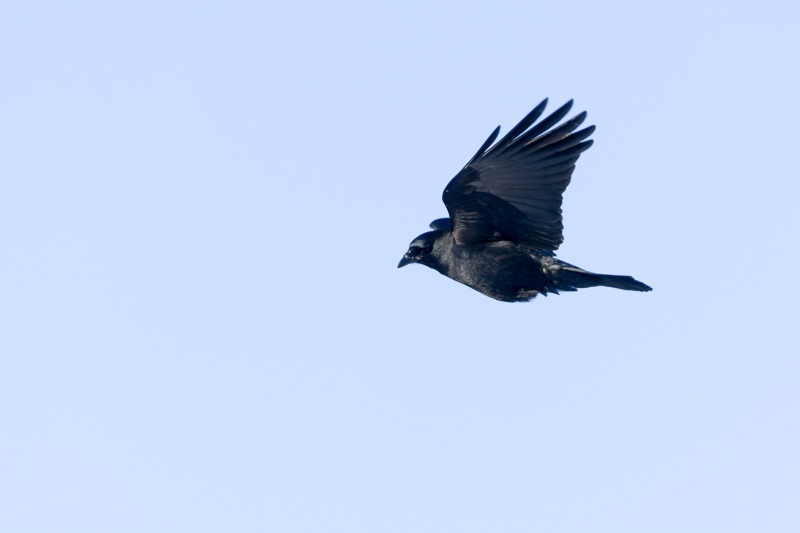 Crow, who needs an introduction?

At one point I could not resist shooting a bird in the sky. Even if that was just a crow. It’s amazing to see that these birds still stay here in the city and find enough food for their energy. I guess scavenging pays off…

That’s it for the first shoot of this new year of 2015 AD. Let’s hope there will be many more opportunities.