Here in Manitoba we like to think that Winnipeg is a big city. Some people only suspect that there are bigger cities out there. I have lived in some pretty big cities in my life but New York is by far the biggest I have visited until now. It also has the biggest bridges I have ever seen in a city. 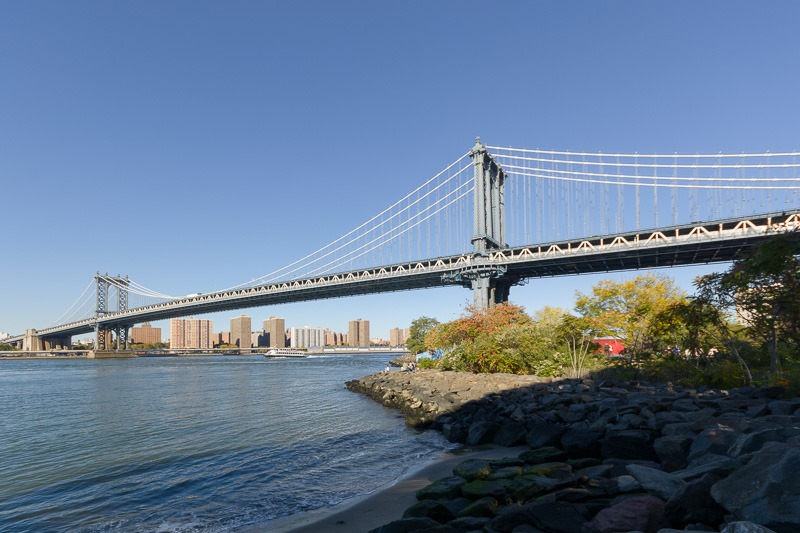 On a walk with a friend in New York, we came across many a great spot for a photo. It’s always better to go on a walk like this with someone who knows the place. It saves you from walking around in places where there is nothing to see.

When we started near his house, we came across a place that has often been used in TV series. Mostly the NYPD-type of series, where the crime scene is under a bridge of some kind. 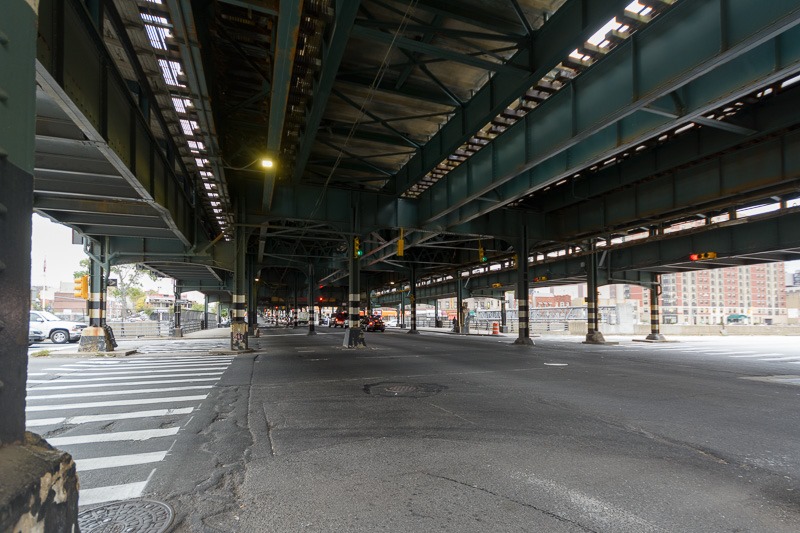 Under the Robert F. Kennedy Bridge

This overpass has a lot of space underneath it and it’s easy to tape off a part to use as a movie set. With lighting coming from both sides and night lighting provided by the sodium lights under the bridge, all is set for a creepy scene with a few dead bodies and lots of cops 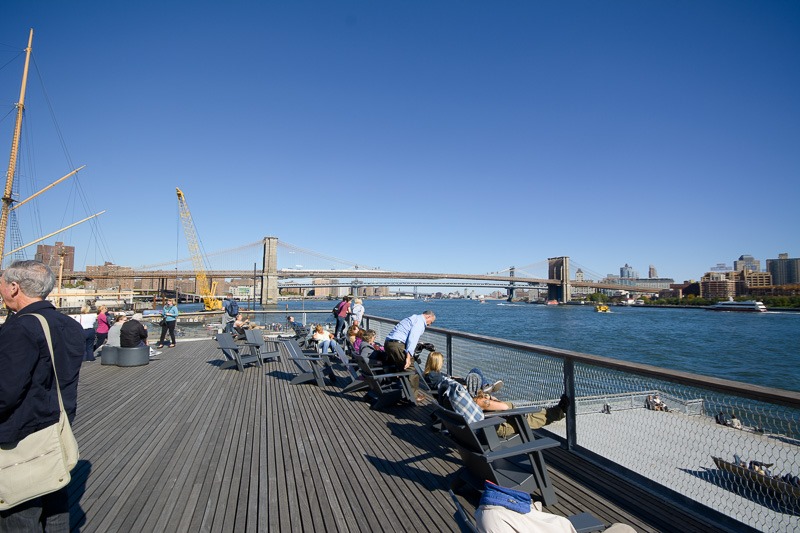 Soaking up the rays

Then we walked on, through the south point of Manhattan, Pier 15, where a lot of the history of New York City was made. The place has been redone entirely but still keeps some of that old harbour feeling with old ships and lots of cargo sitting around, waiting to be transported elsewhere. Today the only “cargo” you can see is a number of people soaking up the rays of the sun, probably the last usable rays of the season. It can get cold in this place. In the background of this picture you can already see the next part of the city walk, namely the Brooklyn Bridge and behind that, the Manhattan Bridge. 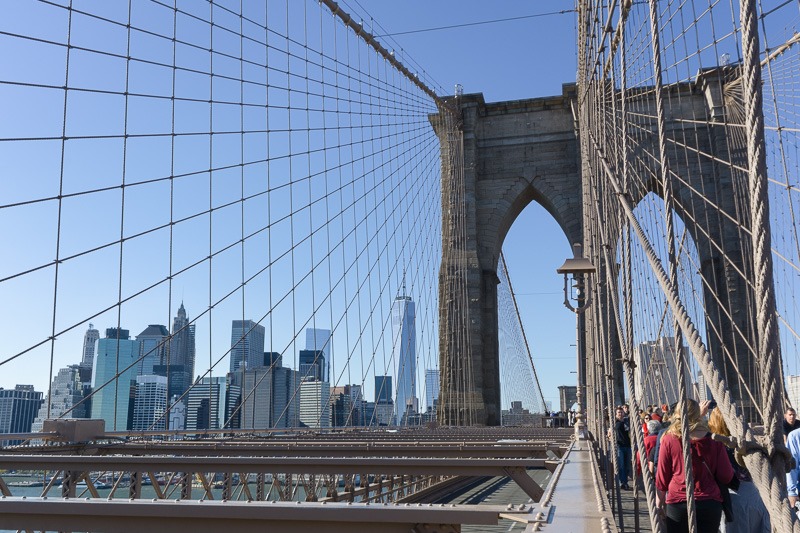 Cable suspension of the Brooklyn Bridge

Going through Manhattan by foot needs a serious wide angle lens. No way you can get away with a “nifty fifty” or anything longer than that. But Manhattan is for a different post. Past Manhattan, the Brooklyn Bridge is a must see in terms of architecture and fauna. The bridge was completed in 1883 and is one of the oldest of its type in the United States. This view, towards Manhattan has changed a lot since the building of the bridge. Compare it to this view. 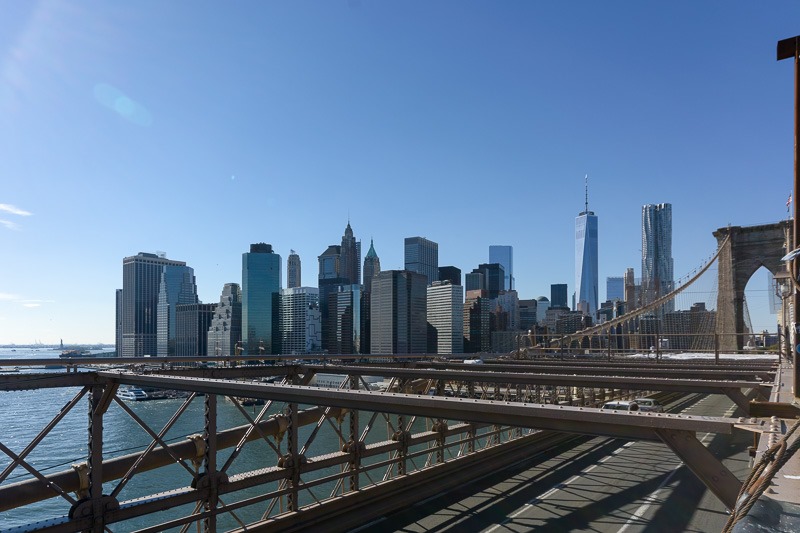 Manhattan from the Brooklyn Bridge

The pedestrian walkway has been there since the beginning of the bridge, and was not added as an afterthought like on so many other bridges. Manhattan shows here its newly constructed Freedom Tower, that replaces the Twin Towers destroyed in the 9/11 attack. The Freedom Tower was not yet open to the public despite the pictures published here. 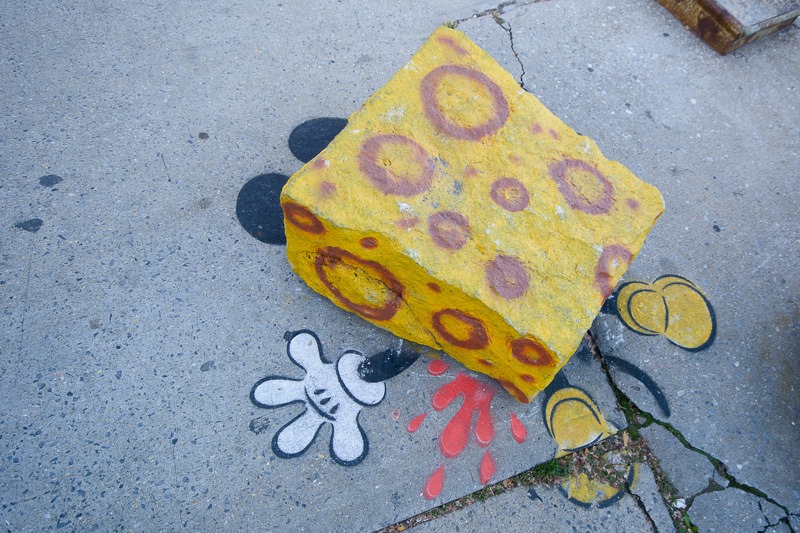 Arrived on the other side of the East River, the scenery changed a lot. Even if it is still New York City, the feeling is different. Somehow SpongeBob here got the better of Disney’s star.

By this time we were quite tired, the walk was an easy 10 mile one up until that moment and we decided to take the subway to our final destination near Central Park. 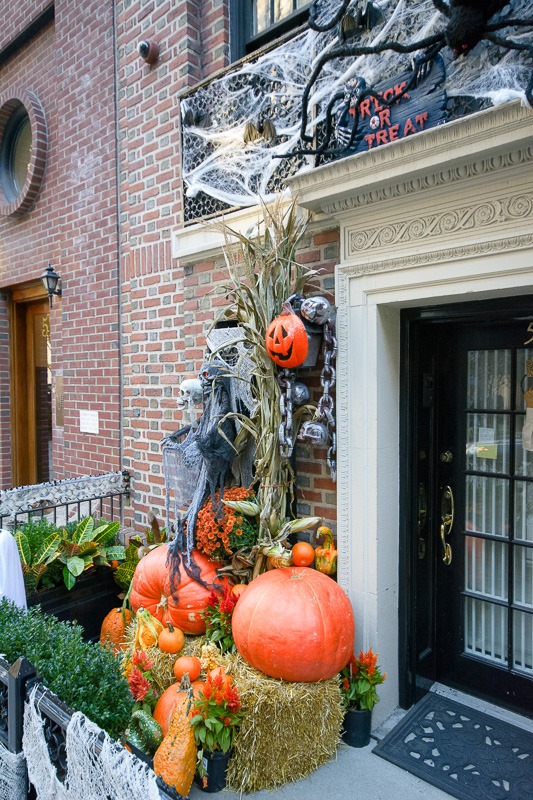 Halloween decorations were already popping up, despite it being only the start of October. Lighting conditions started to become a little more finicky and I had no intention of using my flash outside. Not that that would have helped much anyway. By now we were really tired and decided to sit on a bench. 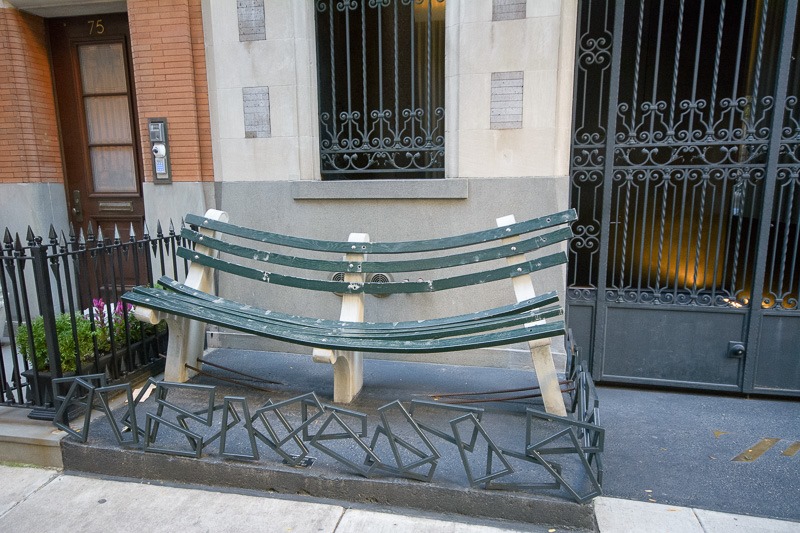 That was probably not the best of ideas, when we got up… Well, you can see the results 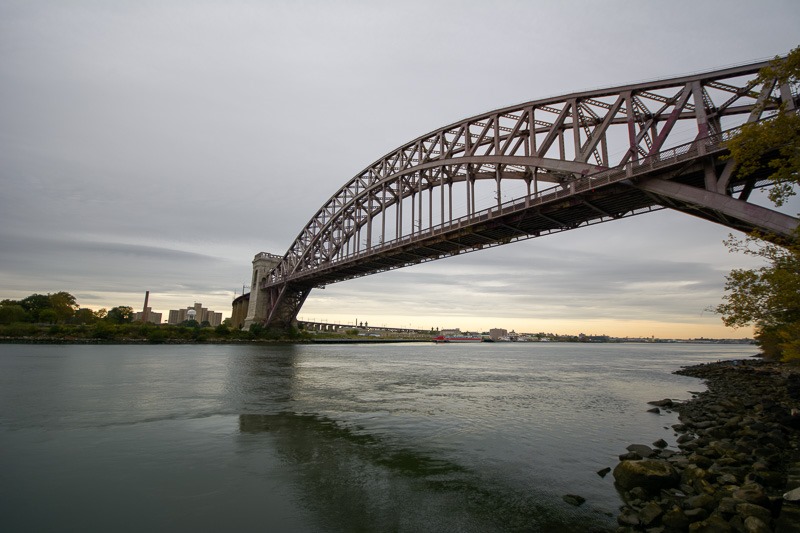 From another point in the same walk,  I had a view of a bridge over Hell Gate. Named so for the fierce currents in the water. In 1904 the Steamboat General Slocum caught fire in this spot. With the shores close by you would think that it was not a big deal.

With the enormous currents here, the steamer could not get close to either shore and continued to burn. An estimated 1021 people died in the fire and of drowning. The life savers on board had been made of cork. Cork usually floats, unless like in this case, it has been reduced to a powdery substance from years of moving around. Adding water to this powder makes it heavy. Talk about throwing an anchor to a drowning man… 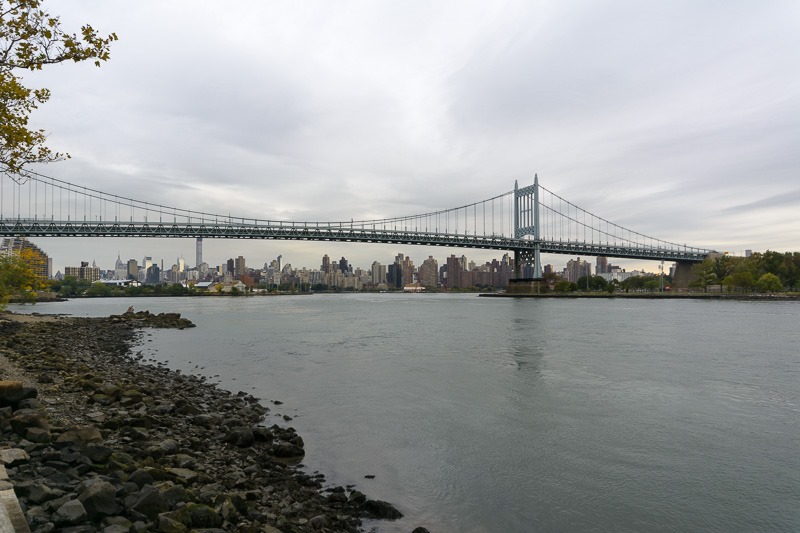 Towards the other side of this train bridge is a view of of the Robert F. Kenney Bridge looking to the Upper East Side behind which hides Central Park. By now, the light was really getting low and we decided to get something to eat and go home.

I guess I have more of the “Big Apple” in store, so…