Ever wondered why photographers always look at the sky? Not to know what weather will be in an hour… No, the photographer looks at the sky to see if there is not a shot to be had. In Manitoba we can have lots of shots and hardly ever turn up with the same. 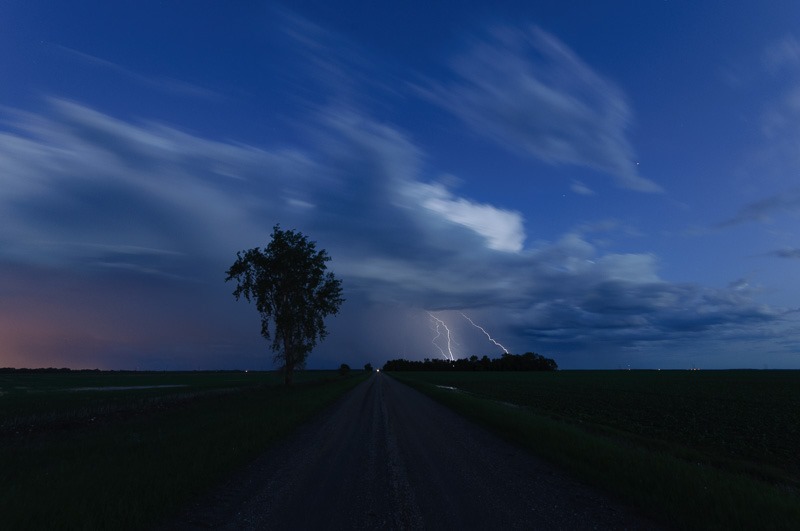 While I lived in Europe, most of the time, the skies were similar to the skies of the previous days. Here in Manitoba that statement doesn’t fly.

In Manitoba the saying goes “If you don’t like the weather, wait five minutes!”. That might be a bit exaggerated but if you wait a few hours, the skies are going to change for sure. 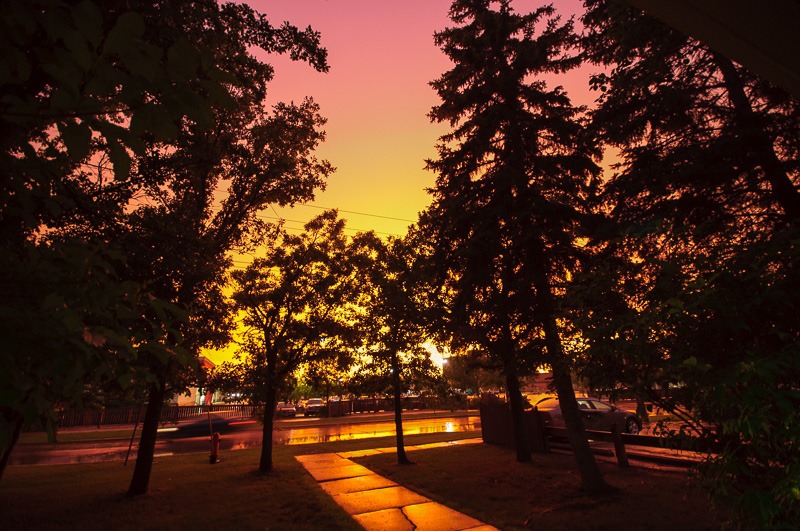 Even looking opposite your current viewport, you will see something different and often shoot worthy. Take a look at the above picture. This occurred after three full days of rain, the atmosphere was sodden with vapour and the sun was setting. When I looked up from my work and saw this fantastic sky, I ran out of the apartment in my shorts and city shoes (easier to put on). This was the first shot I got of that sunshine. 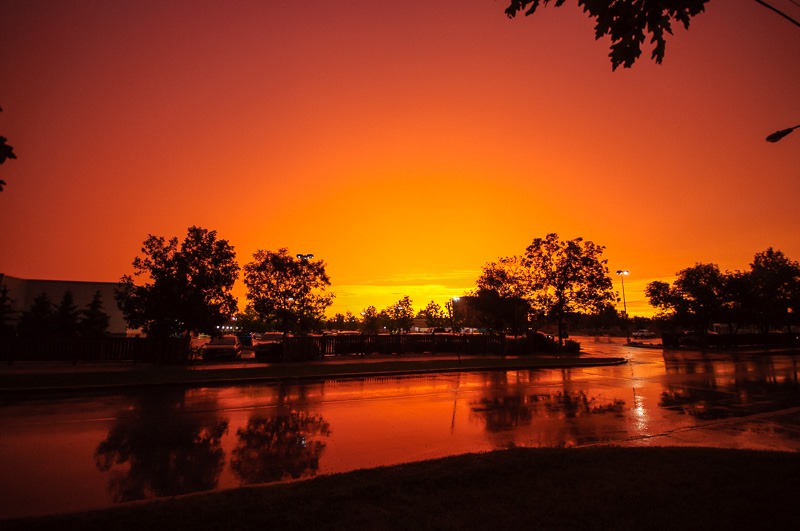 Walking a bit further to the not-so-interesting parking lot in front of the apartment I got the second view. The colours were stunning, but something was still missing. On purpose I kept the small chunks of branches in the picture to give it some feeling of depth. Not sure if I succeeded there. After this shot I hurried across the street to get more shots of this stunning sunset. 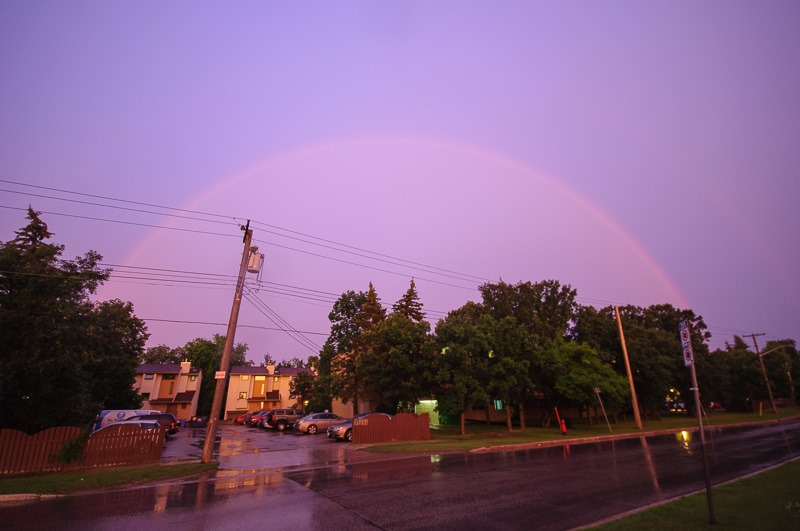 The parking lot offered parked cars and little else. And I simply kept looking at that sunset. There was a mistake. When looking at a sunset, most certainly after the rain we had had, there is ALWAYS something to see on the other side. What would have been a more “standard” rainbow turned out as a double purple hazy rainbow. Note that none of these pictures have had any treatment other than some cropping to set the horizon straight. 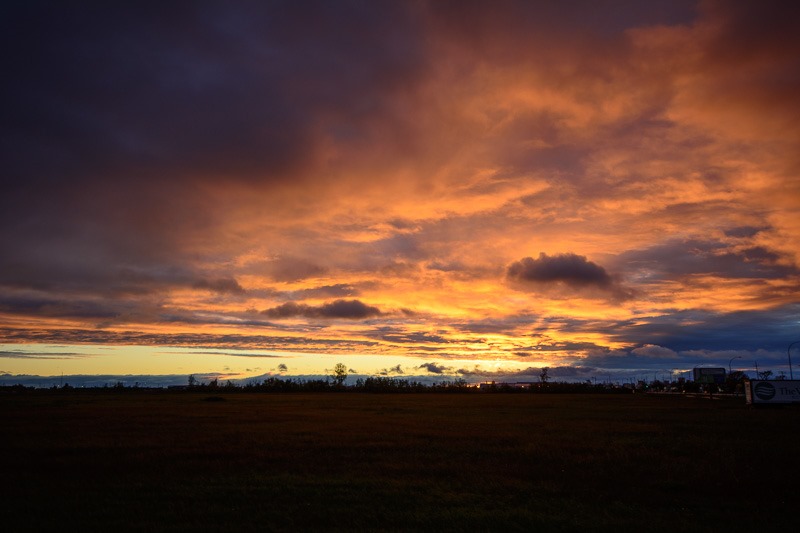 Looking into the sunset is the most natural thing to do. All lovers on the western oriented seashores do it. Over the city, the sunset can become a little more daunting to catch. No water for the sun to dip into… But the skies that result from that sunset can have some surprises like above. I was just on my way to visit a friend’s photo exhibition when I saw this sky. I just had to stop and get a shot of it. 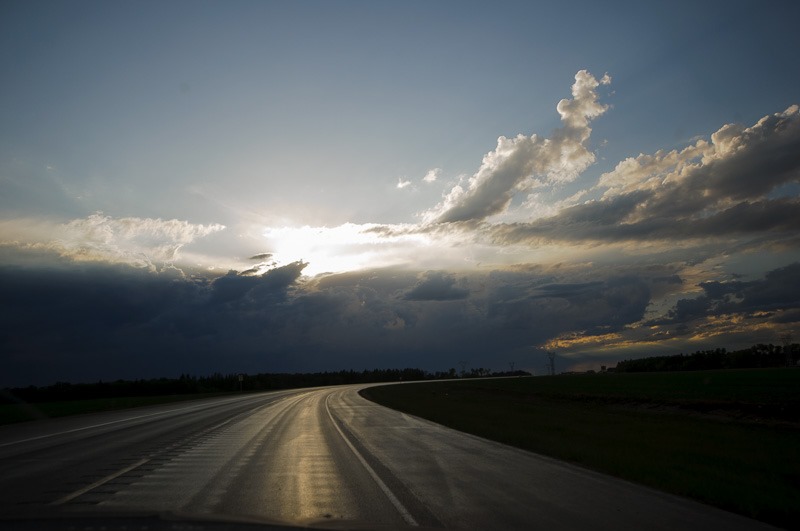 On our way to mighty skies

Other times, there is no way to stop your car and get out. Traffic does not always cooperate. In the above shot I was a passenger so I could shoot freely. That evening we were going out to shoot some thunderstorms. They didn’t materialize when we were there, but the lead picture was taken a few hours later in that same evening. 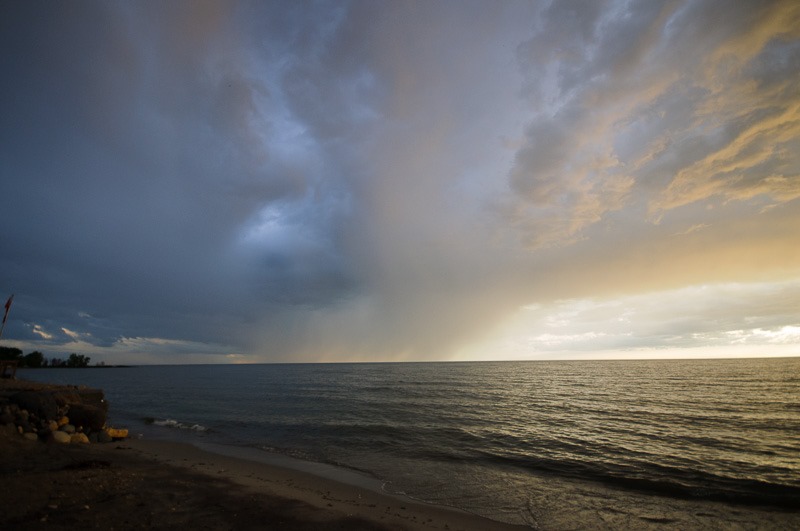 Sunset? Not quite yet!

Arrived at Lake Manitoba on a small stretch of sand (you can hardly call that a beach anymore after the recent flooding took all the sand away) it was still raining. The mosquitoes were also there to suck up as much of my blood as possible. The sunset was to happen on the right of this picture, but shooting into the sun at this point would have given no usable results. 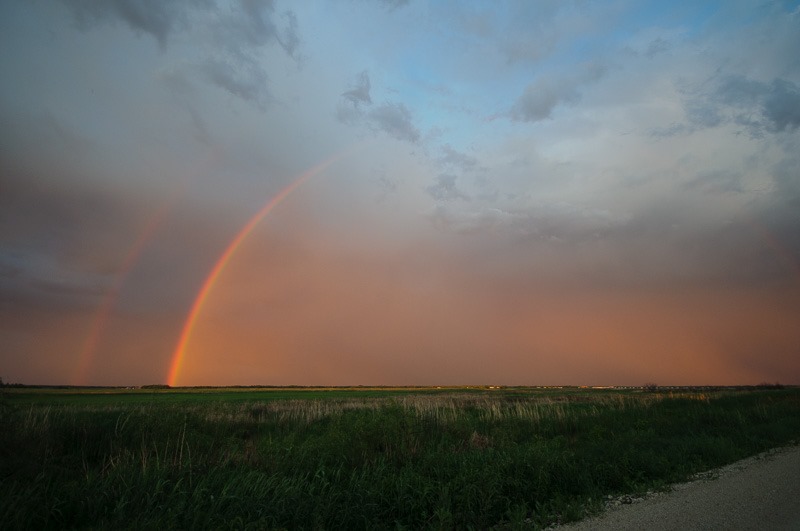 Looking away from the sunset

Instead we moved a bit further north along the lake on some dirt roads. And again the sunset as it were would have been a bland one. Looking away from that sunset gave the above picture. Way better

. The mosquitoes had phoned their cousins in this new spot and notified them of my arrival. I quickly shot my pictures and got back into the car for refuge.

Skies of Manitoba for me are a never-ending story of photographs, a story like none other. While I will not shoot them all the time, I will keep my eyes on the sky for any usable shot of clouds formations and other phenomena.