Skies in Manitoba continue to fascinate me. There is not a day I am not thinking “Wow, I should shoot this”. But there are only so many sky pictures you can take before the whole collection starts to look kind of ehm… bland? 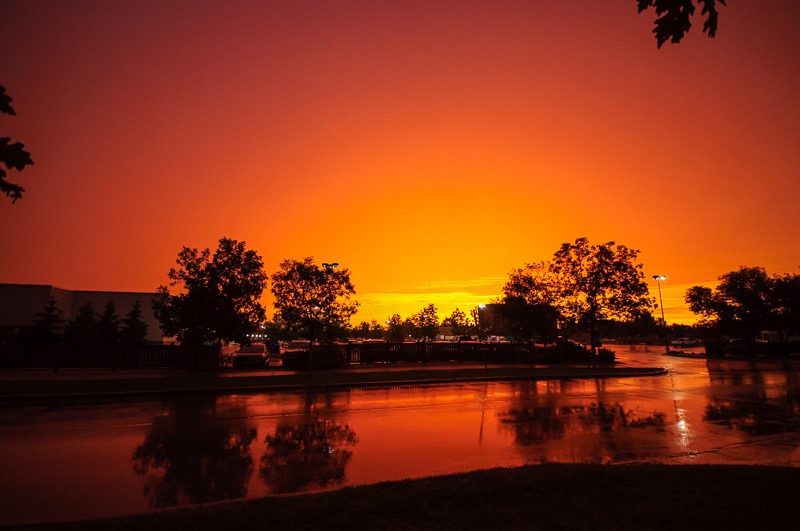 So I “reduced” my number of sky shots until this sunset. I was working at my desk, in shorts. The day had been rainy and gloomy and warm. When the sun set, I had no idea it would go this wild.

A few minutes before sunset, the sky was completely orange, yellow and purple. I just had to go out. I grabbed the camera, the first shoes I could find (city shoes) and ran outside. The lead picture was the first I could see getting out of my building. 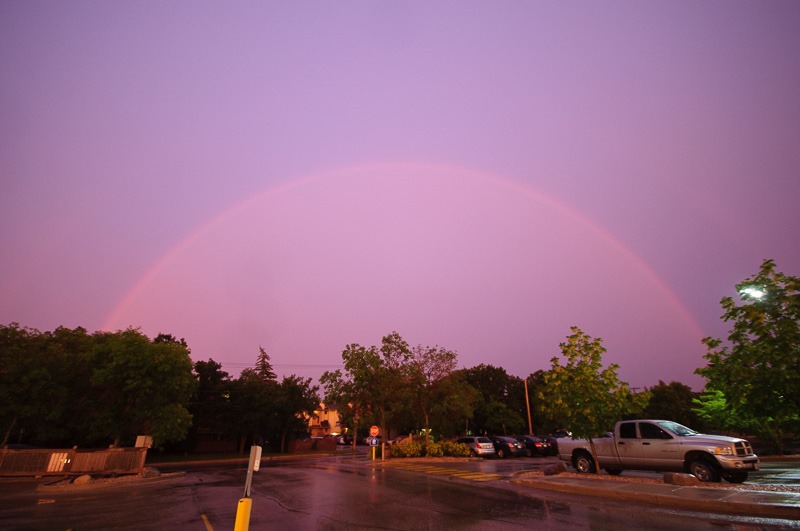 But as many forget and I remember

, when you are looking at a great sunset, the sky behind you may be even greater. None of the pictures in this post have been treated for colour correction, only a little contrast improvement here and there. A purple sky is not one you see every day. 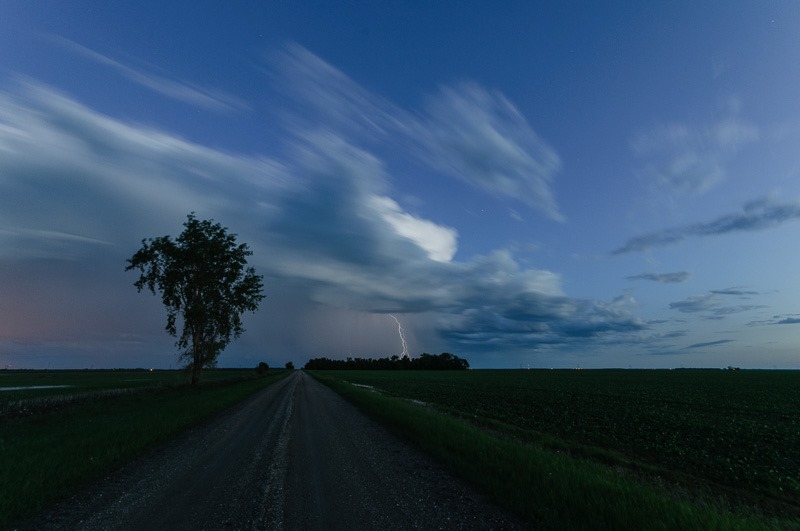 That goes also for when the sky is angry and trying to fry anything in its path on earth. A small earthen path to nowhere (we nearly got stuck in the mud trying to go to that nowhere…), a nice blue sky and an angry thunderstorm far away. What better subject for some night shooting? 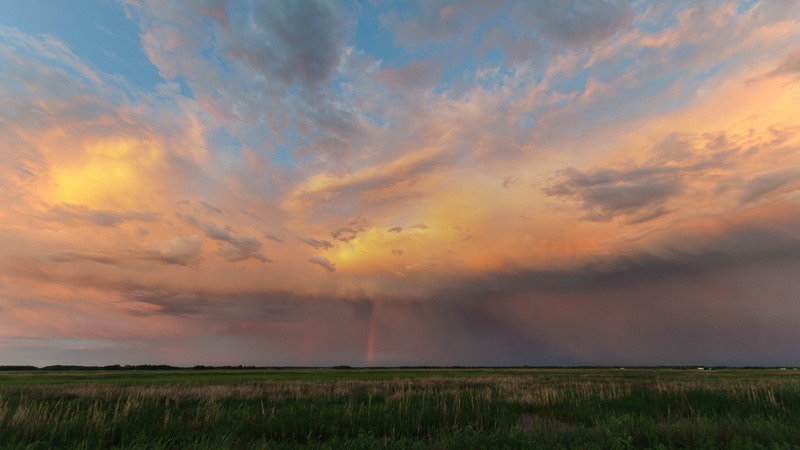 Sunsets and rain can make for really spectacular pictures. I really can’t get enough of that. But there is only so much you can appreciate in a given time, right? I will be dishing out my pictures over a longer period

. Also, when seen long after the fact, some of those pictures no longer make the cut and disappear from the favourites list. Giving you a better quality with the remaining pictures.

The above picture was a different day, but again looking away from the sunset itself. You can still distinguish a piece of a rainbow near the centre. 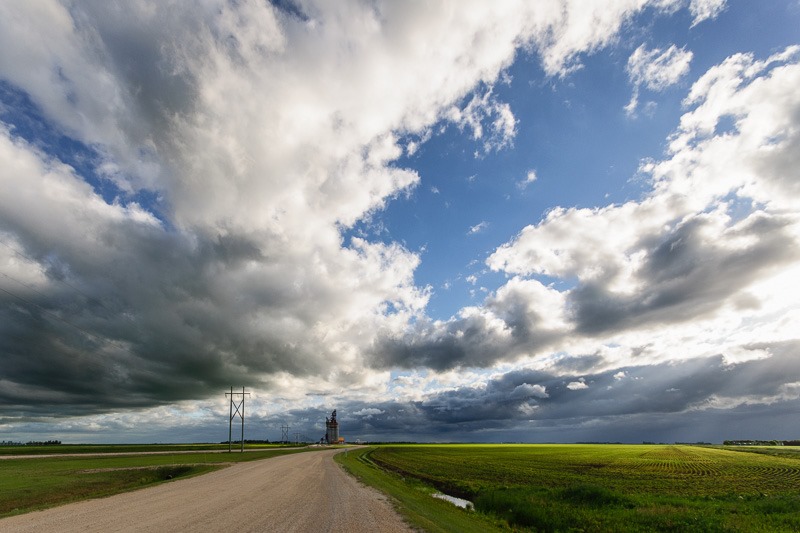 Brunkild, on a clear and threatening evening

During daytime, however, the skies are quite different. The above picture, long before sunset was taken near Brunkild, a little south west of Winnipeg. Wild skies with fast moving clouds and serious threat of thunderstorm. Not enough to break out the storm chasing equipment, though. 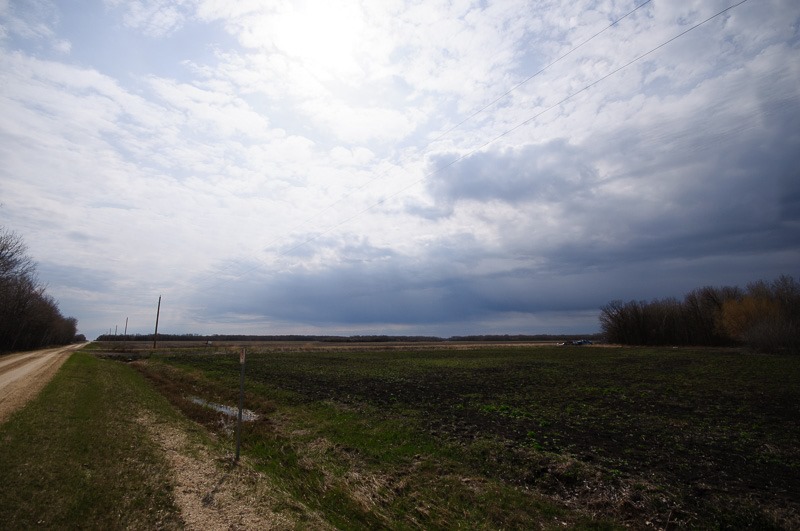 Clandeboye, fishing for skies and supper

A little north of Winnipeg, during a sunny/rainy/cloudy day, this view made me think that there was more to come. But the storm-to-be soon dissipated and made way for more sunshine. Sometimes, the storm is only threatening. 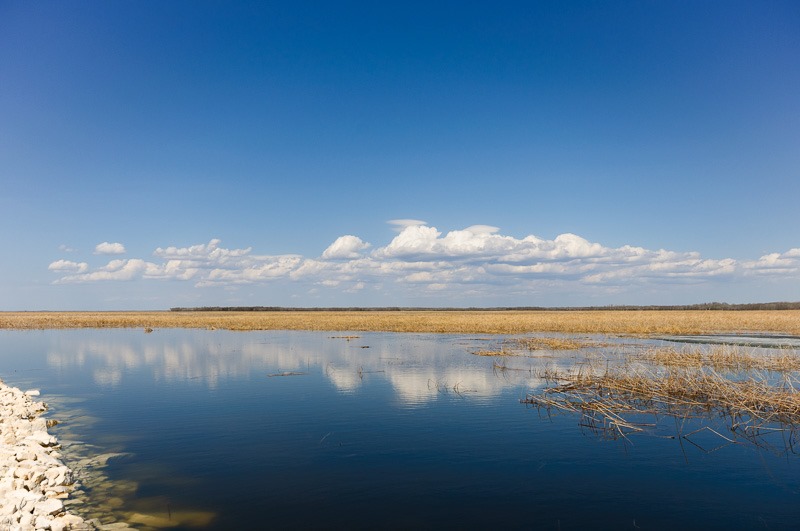 Going a bit more up north, near North Shoal Lake, the skies are really clear as if you can simply drink them. Reflected on the lake, the clouds seem fluffy and without substance. The ice had just melted away two days before, so the crisp air was still very cold. Perhaps that’s why it was so clear. 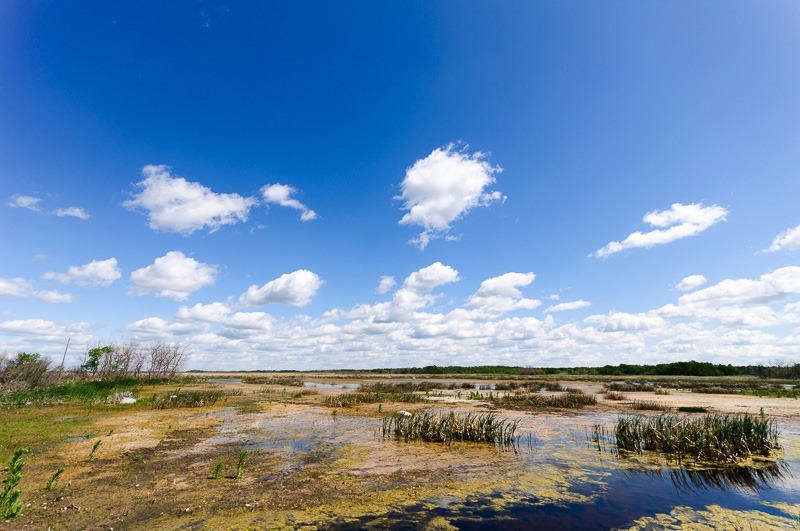 A few weeks after the previous picture I decided to return to North Shoal Lake for more birds and perhaps more skies. Of course I was not disappointed. The water had already warmed up a bit, enough to wake up all the algae and some water plants. The sky was still crisp and clear. The clouds looked as if they were painted in here using Photoshop (ugh, what an ugly term on this blog!

The posts on this blog may become a bit irregular in the next few weeks, major changes in the house are in the making and that will prohibit me from writing and/or shooting.

Until next time (whenever that may be, stay tuned!) …