It’s that time of the year again. The great variety of birds is over, we have the choice of shooting ducks and some geese or find something else. I am the lucky owner of a prime micro lens, allowing me to get quite close to some other subjects than birds. 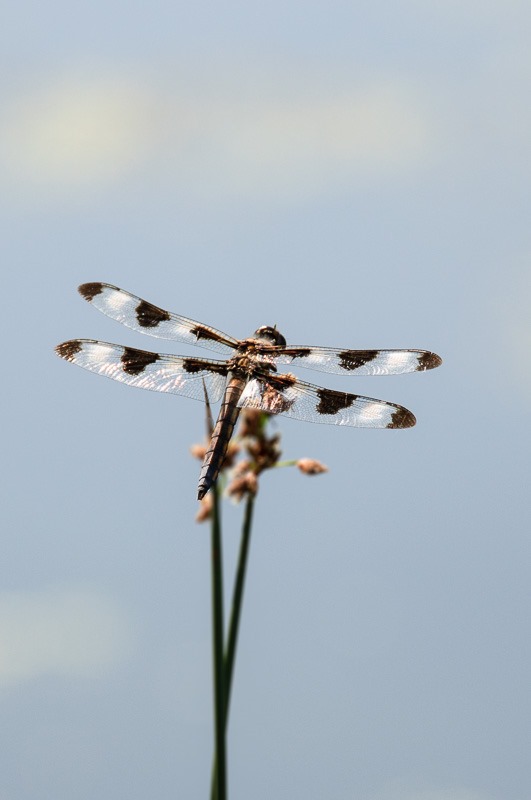 Getting close to birds is one thing, you just need a long lens and you’re done, getting close to insects is a different kettle of fish altogether. You need a micro/macro lens for that plus

a good eye for detail. Many of the creatures I photograph need to move before I see them. Some of them I only see when they have done they nefarious work on my skin. I am still not inclined to shoot mosquitoes for macro work, but perhaps, sometime I will get there. The next difficulty is to get close without startling the insect. You don’t want it to fly away before you shot it. 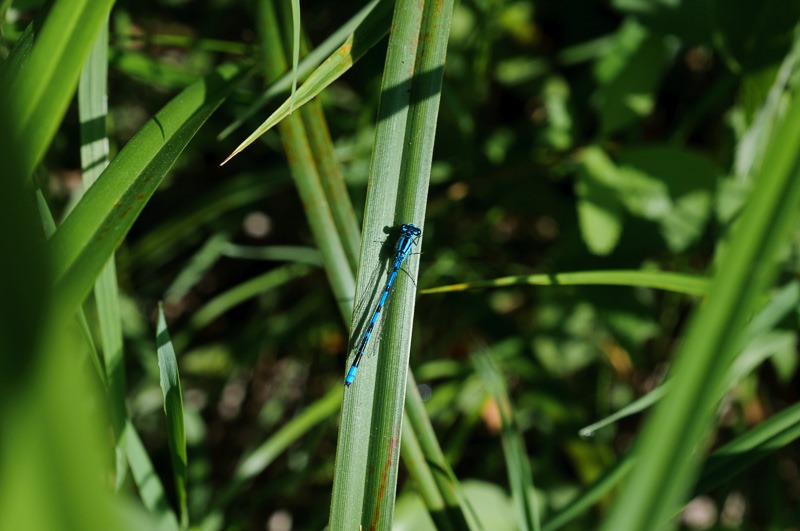 Little Bleuet, skittish even from far away

I started with adding a gadget to my arsenal called a ring flash. Not the one that goes for 700+ dollars to shoot models and the likes, no the simpler one using LED lights to light the subject close by. For macro work that is exactly what I wanted. And for the cost of around 70 bucks you can give it a try without breaking the bank 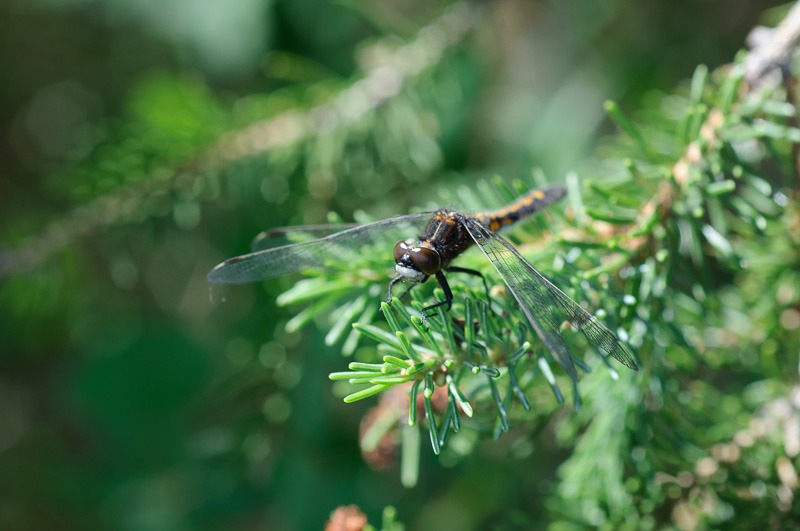 Look closely in the eye

The signature of a ring flash is that the light wraps around the subject, coats it with a soft light without noticeable shadows. It also shows up as a ring in any shiny surface, including the facets of this dragonfly’s eyes. You have to be very close to notice it, though. But I like to do some pixel peeping from time to time, something that came into fashion with digital photography, I guess. I’m not yet sure if I like that ring in those beautiful eyes. 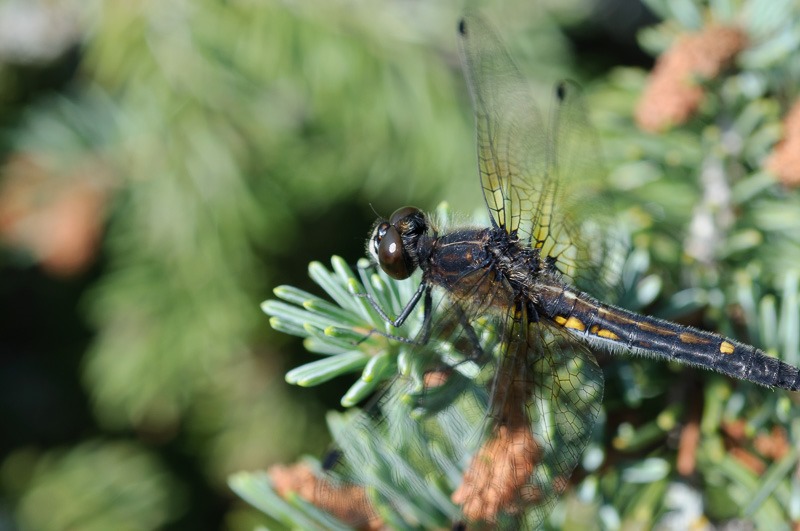 The flash definitely helps in adding light in some low-light conditions, though. Insects usually don’t like the bright sunshine (and the accompanying heat) and prefer to stay in the shadows. So low-light conditions come into the picture very quickly. To get a decent shot you will need at least a shutter speed of 1/500 of a second, something not easily achievable with available light. The flash really helps. 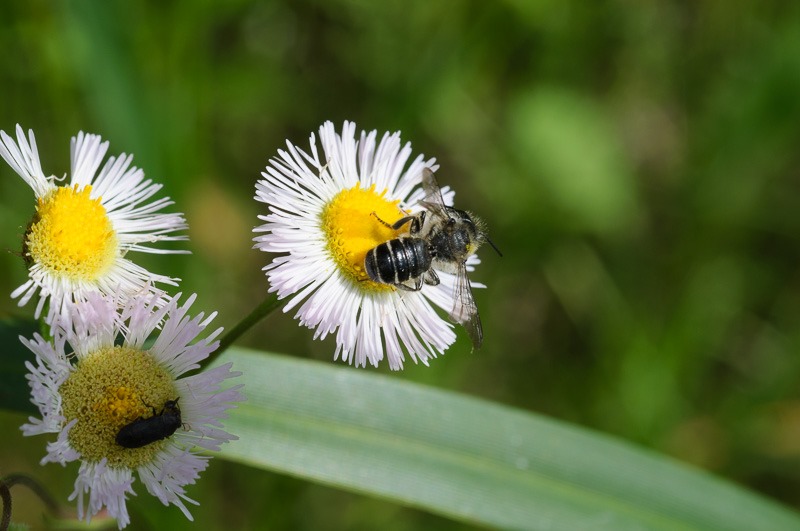 Most of the pictures here in this post were taken with the ring flash, with the exception of the lead picture. That one was too far away for the micro+flash combination. It also helped that it was in the plain sunlight of the afternoon. 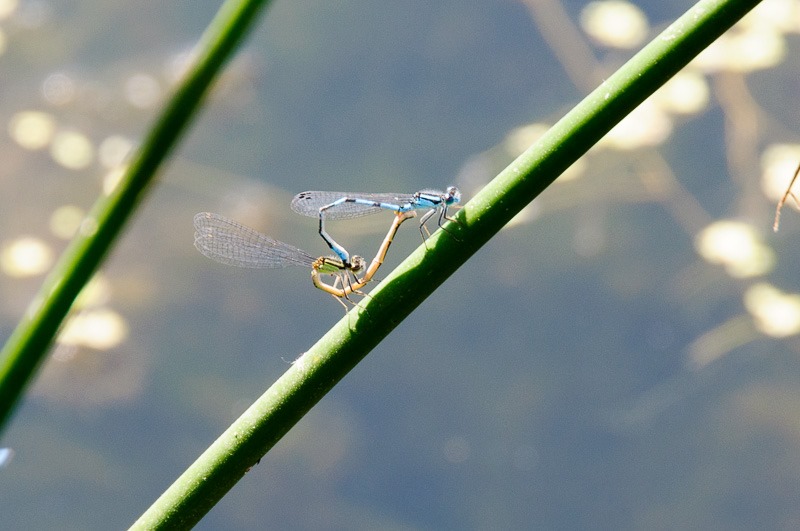 The position say it all

So, getting close is what it’s all about here, adding some light comes in handy. I hadn’t used the micro lens for a while and forgot what skills were needed to get the shot. A lot of the pictures went straight to the garbage once I got home. The wafer thin depth of field at f/2.8 kind of throws me off sometimes. Getting only the wing tips on focus and the rest blurry is not my idea of a good picture. Bokeh lovers, stay away! 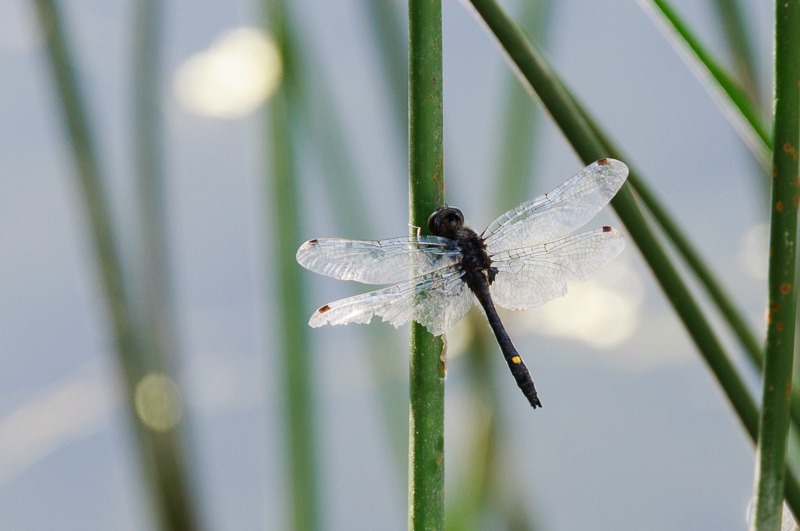 Some dangerous encounters in the past

Some of the insects I found seemed to have had a rough life already, so what am I complaining about some out of focus subjects? There are more hazards in life. 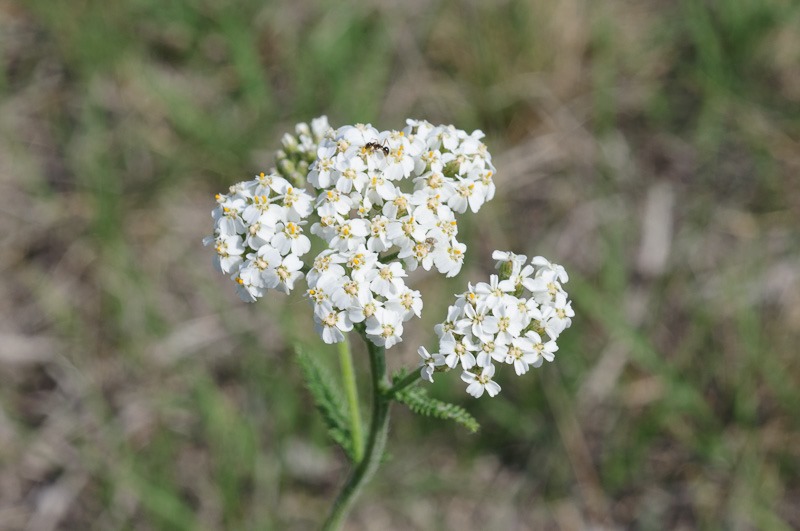 In the morning, I left for Birds Hill Park, a place where last year I had a lot of fun shooting macro under the leadership of a biologist. So I thought I could do this on my own this time. However, there were not many creatures around yet, so I started with the flowers/weeds, to see where my skillset had gone for shooting macro. However, the best dragons I found later in the Assiniboine Park at the Duck Pond, shooting them with my 28-300mm. Mostly because they were resting above the water, I couldn’t get close enough without getting me feet wet.