A few days ago, the weather was great. During the day, a nice blue sky, not a cloud in sight. I went out to shoot some birds and came up empty handed. I guess that the “exotic bird” season is now over. Most of them have found their homes far away from my camera. I decided to top up my vitamin D level and take some more sunshine. 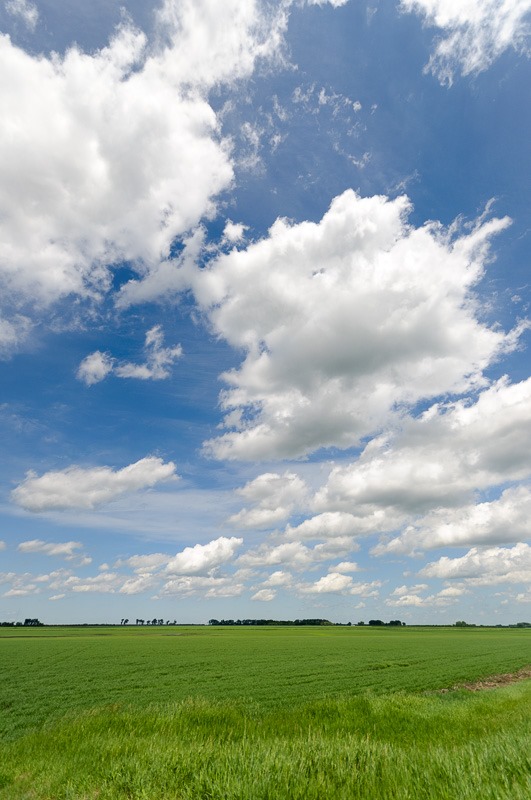 Then, oh misery, some clouds appeared. First small ones. You know them, those fluffy little white clouds. Temperatures soared around +30C or +86F. Little by little, more and more clouds gathered and at one point they obscured my source of vitamin D.

I decided to go home and see what my miserable shooting session had yielded. Nine pictures

! Of which a few were duplicates. Then I heard a rumbling in the sky, far away. At first I thought it was an airplane. But the rumbling held on for longer than usual.

By the time I was outside and in a place where I could shoot it without danger for life, limb and camera, the storm was moving away, fast. So I went back home and checked the weather radar sites to see if there was nothing more forthcoming. 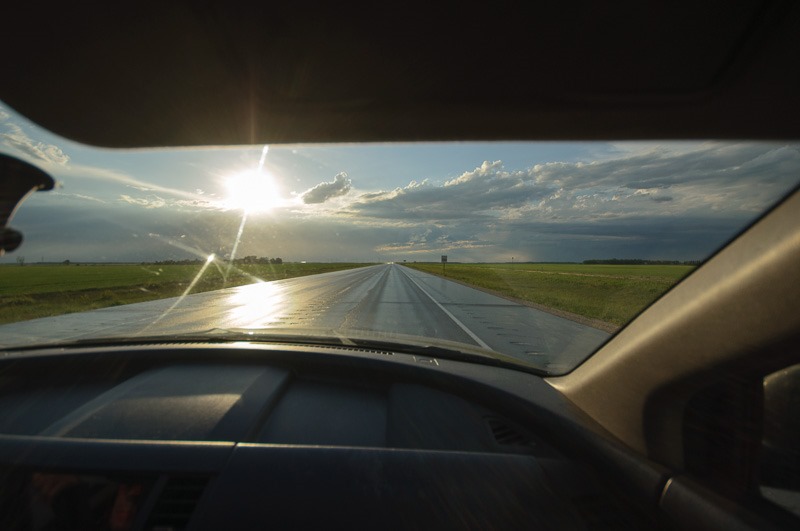 The radar showed that what had just gone over my head was just a little speck compared to what was in store to the west. I called up some friends and we decided to go north, close to Lake Manitoba, where that storm system would give great results. 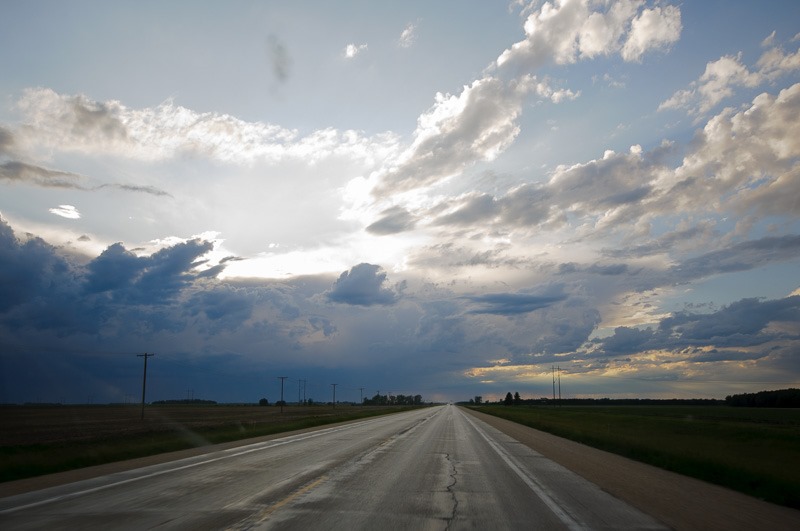 During the trip north, we saw lots of lightning bolts and lots of storm clouds. We were aiming for the next wave of stormy weather. 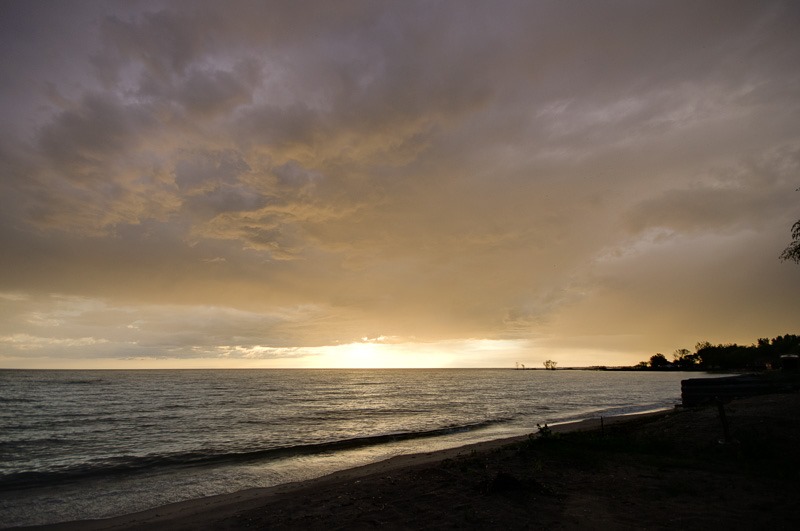 When we arrived at the beach, the only thing that was left was the sunset.

A sunset scheduled for about 15 minutes later. In the mean time a gorgeous rainbow showed, that by itself was already a great thing. You don’t see complete rainbows in the city. But when you say rainbow, you also say rain. We got soaked. 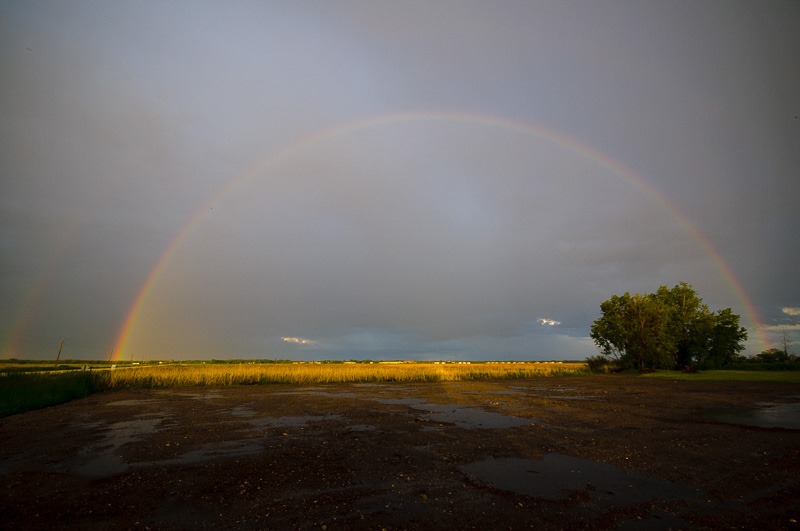 The full rainbow, doubled up

I also must have lost about a kilo in weight to the hungry mosquitoes. Those critters have the size of flying pigs over there! We decided to move a little further away, where the mosquitoes didn’t know us yet and where the sunset should look even better. Arrived at the designated spot, we were afraid that we’d have to dig out the car from the mud. Not the best of ideas, so we stayed on the road. Some were a bit disappointed that the sunset couldn’t be shot. 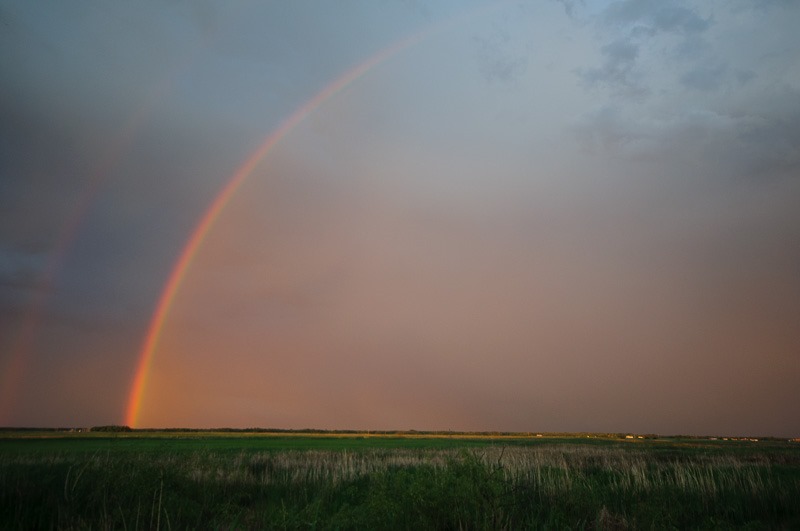 But was is a sunset shot? A fireball lowering itself into water. And that fireball will inevitably be overexposed.. The resulting orangey colours then represent a romantic sunset. But in Manitoba we have no palm trees as props for a romantic, tropical sunset

. Looking BACK, however, the sky was gorgeous and full with colour. 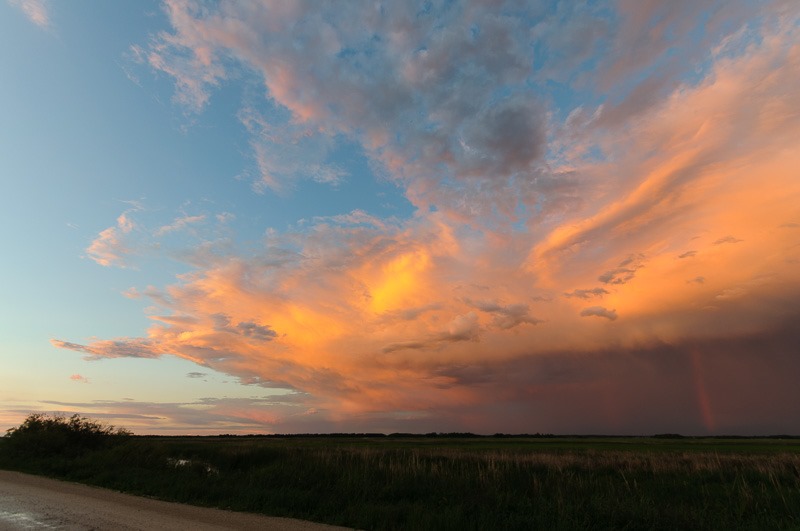 With parts of the rainbow still visible (it must have been raining hard), the setting sun coloured everything a deep orange. We were shooting the tail end of the system. We were shooting it quickly, too. The mosquitoes here must have some really sophisticated communication system to have found us that quickly. 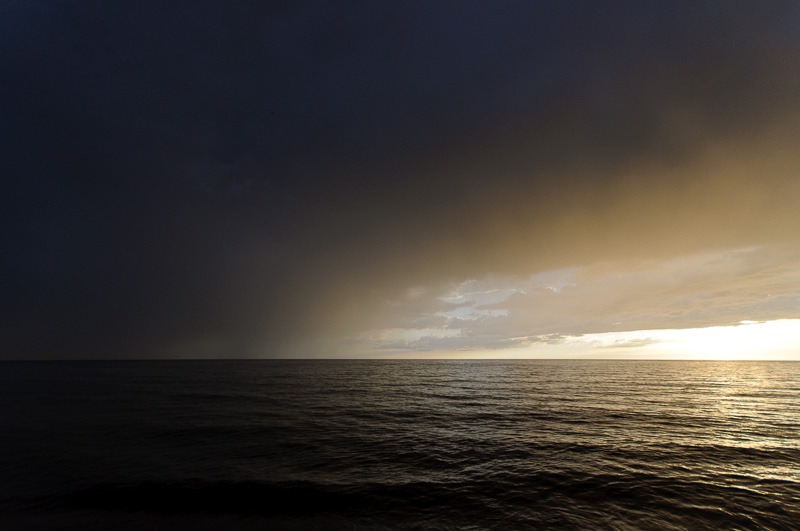 The tail end of the storm

A few minutes later the sun was gone and the colour started to fade. Waiting for the “blue hour” was no use, there were too many clouds in the sky. And still no thunderstorm to speak of. A thunderstorm was what we had been promised by the radars, and we hadn’t seen a single shootable lightning bolt.

We decided to go home and call it a night. There is no use in playing mobile restaurant for the local flying critters if there is nothing in return. Charity only goes so far. On the way back, though, we spotted some lightning, not even bolts, but simple sheet lightning… After a while, they got worse/better and transformed into lightning bolts. Ready to be shot. 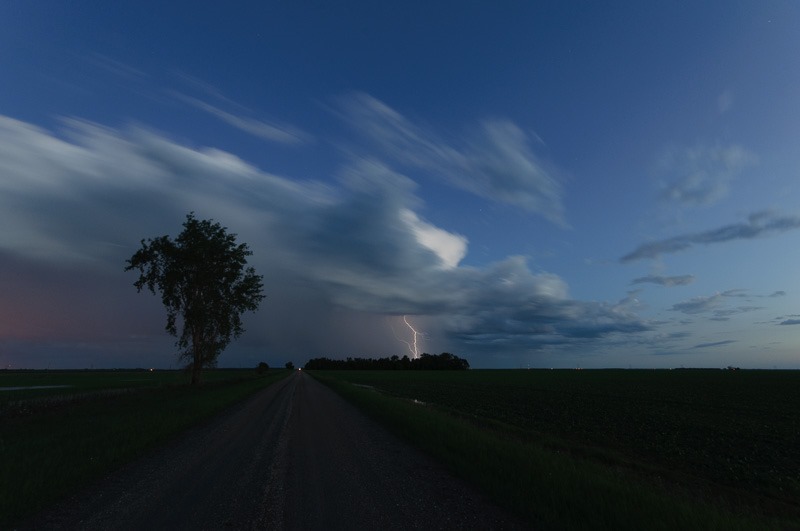 Still far enough away from the storm, we parked the car and set up with some material. My lightning trigger works. But by hand I can be faster to trigger than that useless thing. Never buy an Opteka LTX-80, it fires the camera after the lightning has gone, then continues to fire the camera until you switch it off and recalibrate it. During that recalibration period there is usually another lightning strike and you will have missed that one too. I decided to do it the old fashioned way. 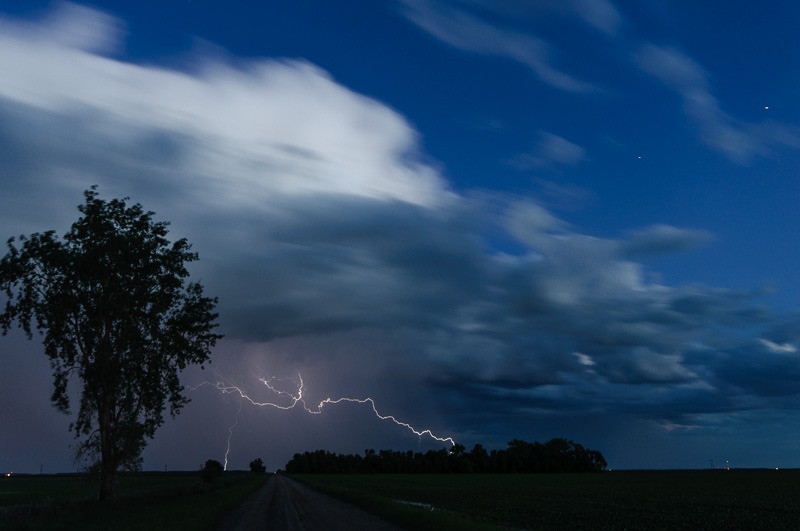 The storm is getting active

Set up the camera on the lowest ISO, 30 second exposure and pray that during that time the lightning strikes somewhere. Far far away, preferably

After another half hour of getting decent lightning shots we called it a night. The storm had gotten considerably closer to us and too close for comfort for me. We could hear the driving rain coming closer. Cold wind started blowing, a nice relief from the mosquitoes, but a sure sign that the storm was coming too close. 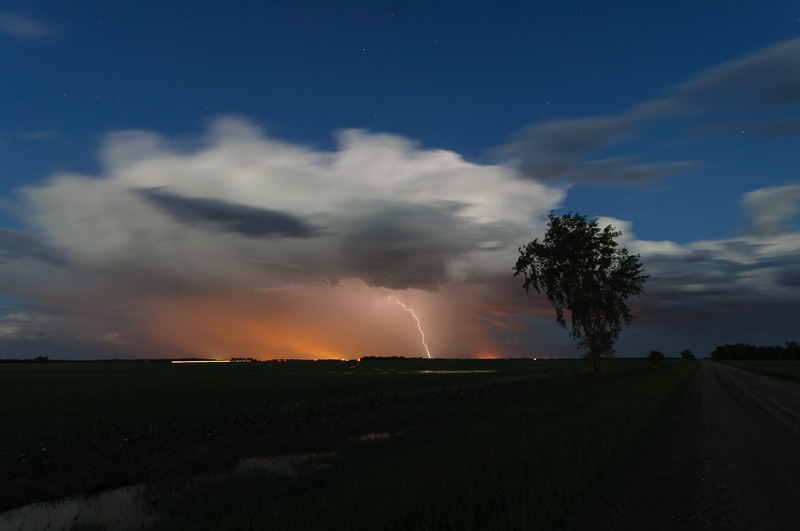 A last shot, the city of Winnipeg lighting up the bottom of the storm with its sodium lights, that strike must have hit home somewhere. When we arrived in the city, fire trucks were going everywhere, but I saw no real fire.

Once home, the pictures had to wait until the next morning. No use in developing anything during the night.

And so ended a great evening of storm hunting (and being hunted by a storm!).