About the Great Grey

The Great Grey Owl is the provincial bird of Manitoba, and not the mosquito as some funny people may want to make us believe. Adults are between 48 and 76cm tall and they may weigh up to 800g. 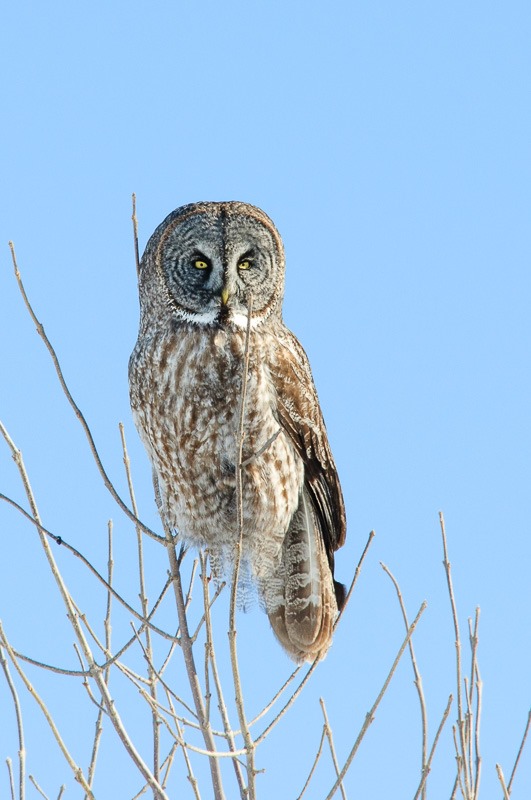 The Great Grey is a magnificent bird relying on its ears and eyesight to hunt.

In the lead picture above you may even distinguish some of its “underwear”, fluffy feathers designed to keep the animal warm in cold times. And cold times we have had this winter. 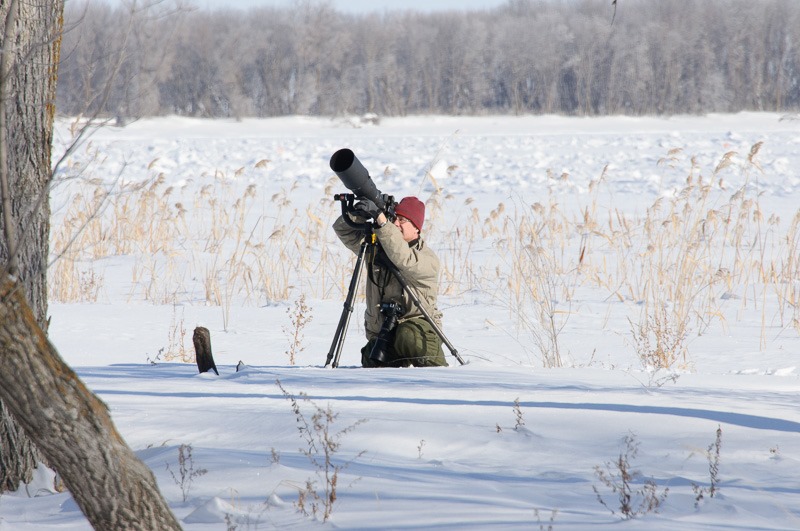 Unlike the Snowy Owl, who is used to hunting in howling winds, the Great Grey cannot hunt when there is too much wind or blowing snow. It also cannot hunt when there is too much distraction close by. The above photographer with his no doubt top notch material was lodged plain in the middle of the owl’s hunting grounds. How would you like it if some animal came and planted itself square in the middle of that juicy steak you were planning to eat? The above photographer went way out of line by getting this close to the bird. Once it flew away (the owl, not the photographer) he started making noises with cellophane to attract the bird’s gaze and shoot one more, no doubt beautiful, picture. 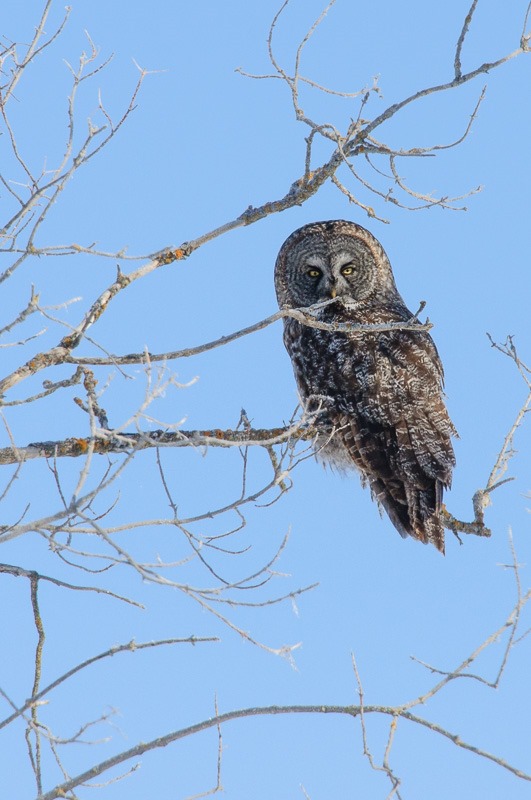 In the mean time the bird was still hungry and had lost its hunting grounds. Other photographers, like me, do not allow themselves to bother the animals and stay at a decent distance or even on the road. 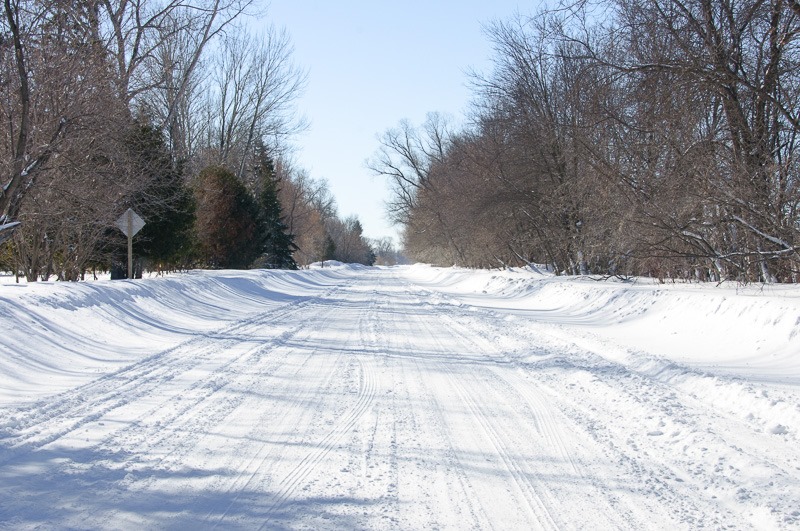 Owls don’t hunt on the road, there is nothing for them to eat unless they are baited. Also a practice that is far from useful for the birds. Not only will they get closer to human activity than is healthy for them, once the humans are gone, they will have forgotten how to hunt themselves for food. They will die as a result. Mice and voles do not crawl under the snow on a road, making the owls dive onto it to get a good shot is putting them in danger of being hit by cars. Not good!!!. 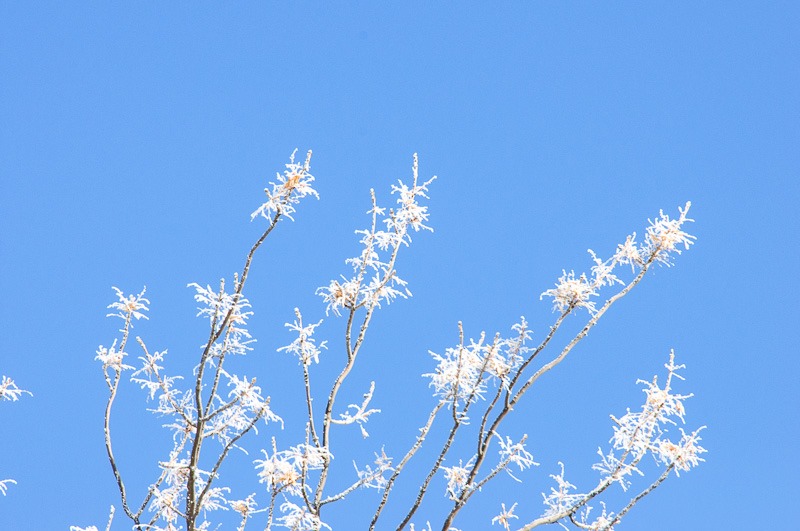 But let’s stay positive and admire the birds and their surroundings a little more. Hoar frost had covered the tops of the trees that morning, and I couldn’t resist shooting one single picture of that clean frosty treetop. 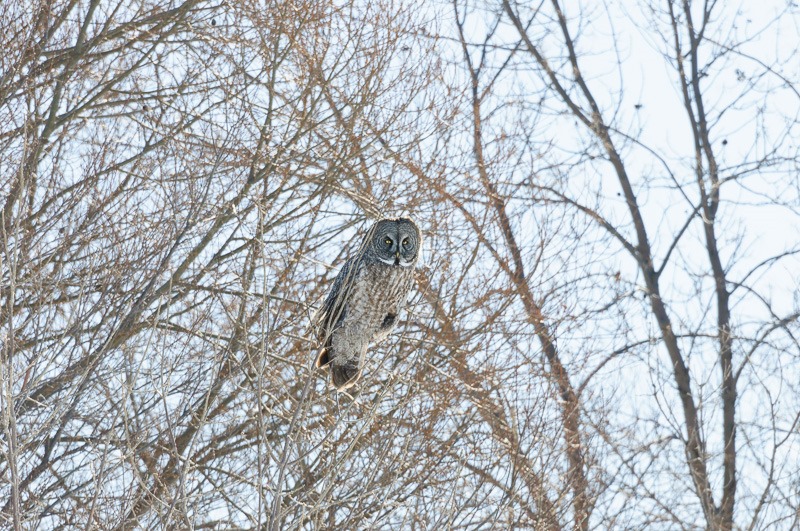 In the mean time, more owls had gathered in the area and the pickings for photographers were getting better. For the owls, not so much. Some were fiercely defending their table by chasing the others away. No feathers were harmed in the process. Some owls were pretty well hidden in the branches, while others were more in the open. 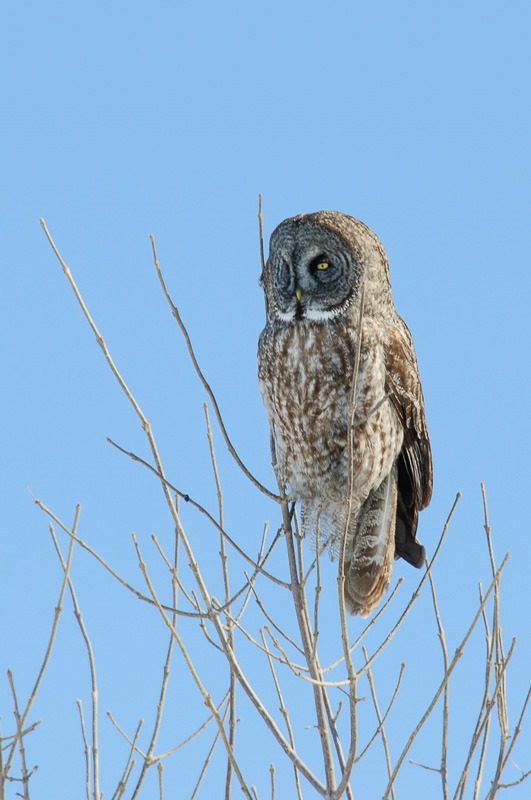 This beautiful specimen had just chased away a fellow owl and had returned to it hunting spot. Intently listening to the snow and what was moving around underneath it, it had no more ears for humans and I could get pretty close to it. Staying on the road of course. The owl had absolutely no interest in the “road part” of its hunting grounds.

At one point the owl noticed me and looked at me as if to say “Go ahead, but don’t chase away my food”, but it didn’t move. After a while a car came rolling by. No doubt more bird lovers. The people got out of the car letting the engine run. The vibrations were enough to scare away any critters under the snow and the owl took off. 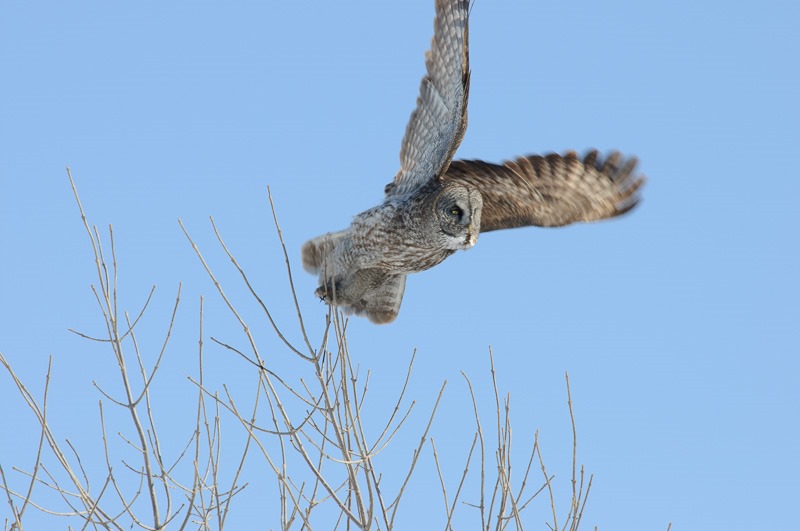 It was a bit of a surprise for me to see that owl take off this quickly, I had barely enough time to get a shot of it in flight. The wing is slightly clipped, I will not win any awards with this picture, but I think it nicely shows the bird’s ability to fly away in absolute silence.

Then it was time to get back home and process the images taken in the morning. Some good, some not so good, more even went straight in the garbage. That’s life.