The dark side of the moon 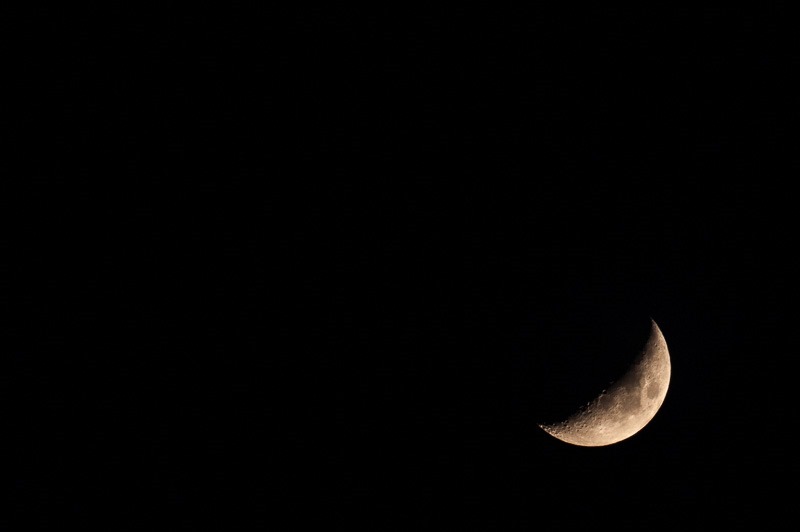 Mostly though, we take pictures of the moon when at least a small part is visible, so that we can find it easily in the sky. In this picture, the dark side of the moon is clearly (?) visible. Hmm, perhaps I should change my argumentation.

Or perhaps I should talk about the dark side of the earth.

The dark side of the earth is a side we experience every day, ehm, night. It is the side that is not directly lit by the sun. Ok, here I go again in some murky astronomical so-called explanations. I’d better talk about what a photographer can do in those dark times. 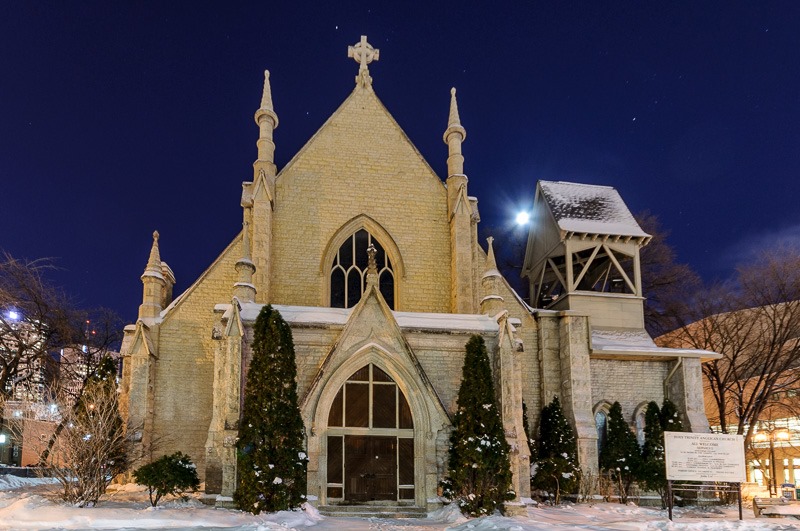 Since they are pretty frequent, it is easy to catch a night, go out and shoot. The only thing you really need is a good, stable tripod. The city can reveal some very interesting views during the night. Things you don’t see during the day. 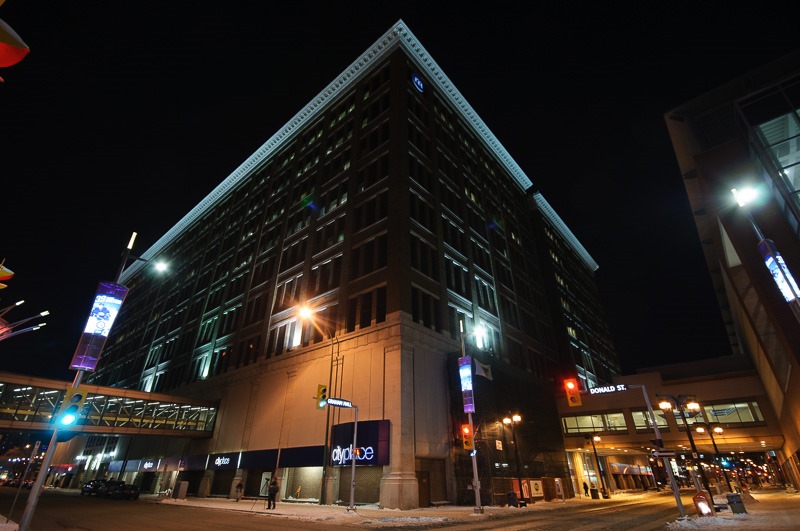 City Place, lit from underneath

Downtown Winnipeg seems “uninteresting” in the dark when you drive or ride home after work. Most people rush to get inside their houses and apartments, only to flee that dark atmosphere outside. Others go outside and enjoy that same dark atmosphere. Buildings take on a completely new face in the dark. 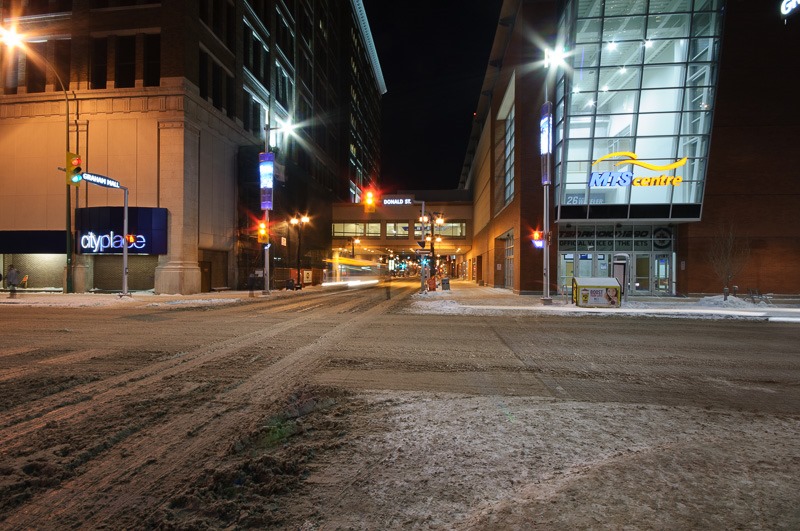 Streets look strange and uninviting. Well, at least during winter that is. Here in Winnipeg little outdoor activity looks inviting by –30C. Therefore I like going out with company. Sometimes fellow photographers offer a new view on objects and situations that are worth exploring. Sometimes I inspire photographers to look differently at a scene. 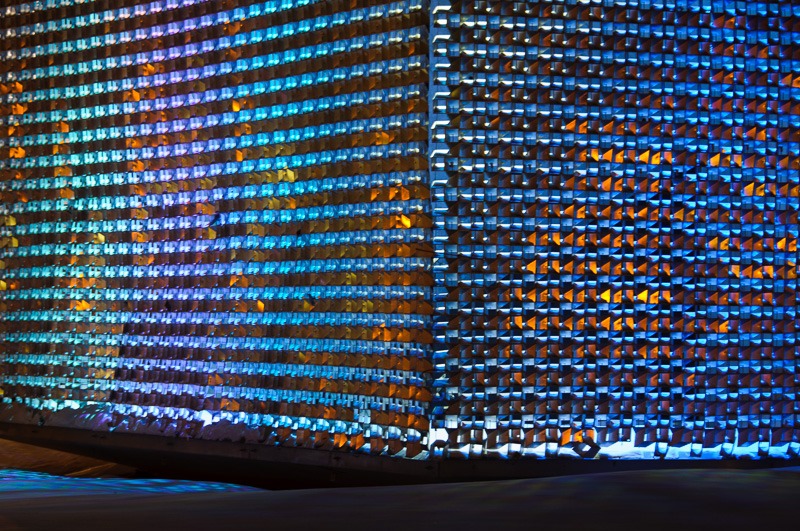 It’s a matter of give and take. Sometimes, that new view can be quite interesting. The Cube, an artists’ podium in the centre of the city is lit by continuously changing coloured lights. No two shots are identical. In summer, The Cube folds open and artists play music inside, for everyone to enjoy. 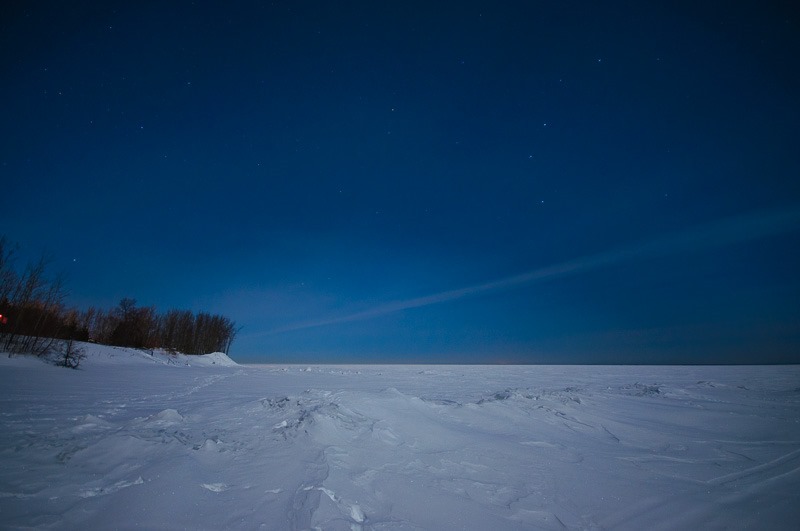 But not always do I stay inside the city. Outside, interesting views are also on the menu. Hunting for Aurora with a friend was an interesting experience. Mostly because there was no aurora to be had. Leaving Winnipeg, the forecast was jubilant about the “excellent” aurora that was to be photographed. 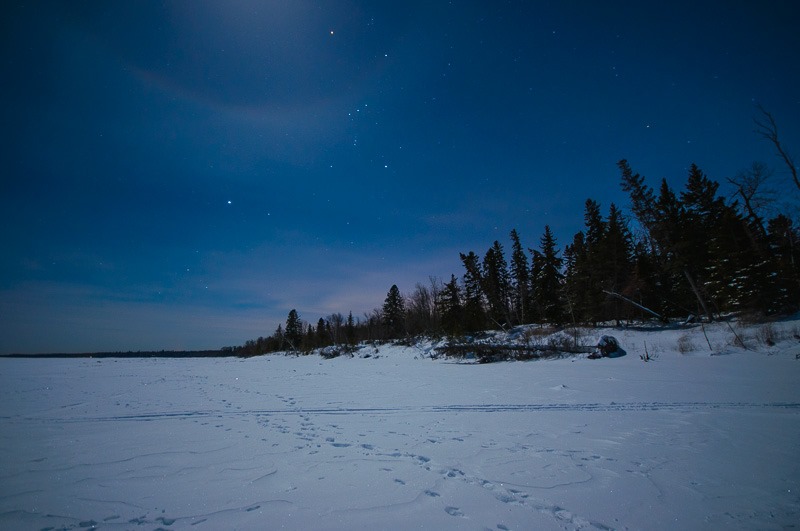 Lake Winnipeg, just outside the grasp of the full moon

Arrived on Lake Winnipeg, some 90km north of the city, the forecast had “retracted” itself into a minor no-event with the exciting news that there would be no aurora that night. Anyway, being in company is always better than alone. The following week after these pictures, I went out by myself to enjoy a “major” aurora storm. The sites were raving about the views, while looking outside from my car window, the sky was black and cold. 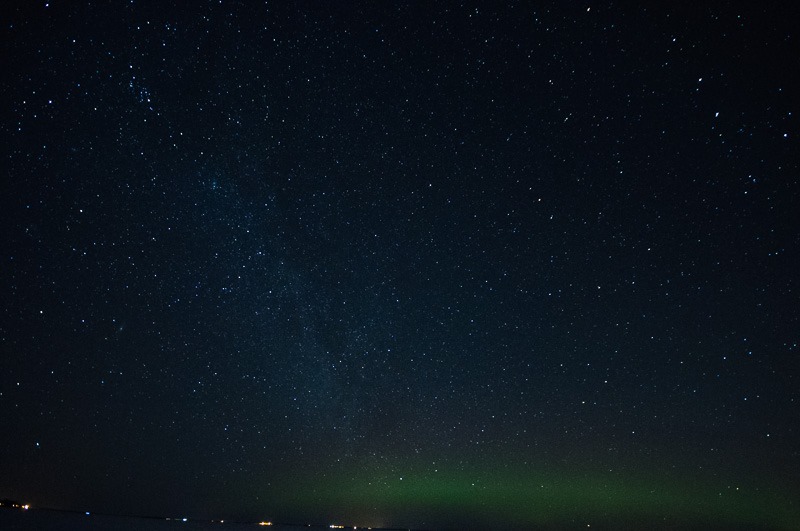 A cold and bright Milky Way

A few days after that, a “major” event was to give us another one of those spectacular shows and resulted in this meagre little green band, hardly visible above the surrounding city lights. The stars, however were spectacular and became the main focus of my evening. As well as keeping my mitts on my hands. The Milky Way was nice and bright, the night cold and unforgiving. 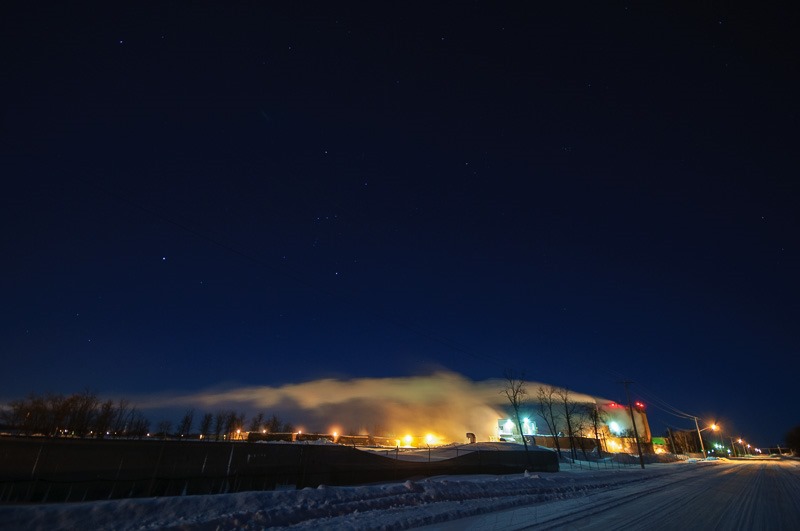 The last time I went out, I thought that perhaps I could get a drink, straight from the distillery. They wouldn’t let me in so I took a picture instead. Distillery Road in Gimli is a great view on cold winter nights. Steam and water vapour constantly mix with the sodium and mercury lights, giving a nice lightshow. But no whiskey to be had anywhere.

Anyway it’s not good for my driver’s license.

So night activity can be interesting. But for some of them you really want to get to see the dark side of the moon. It makes for more colour-rich pictures.