In search of the Great Grey 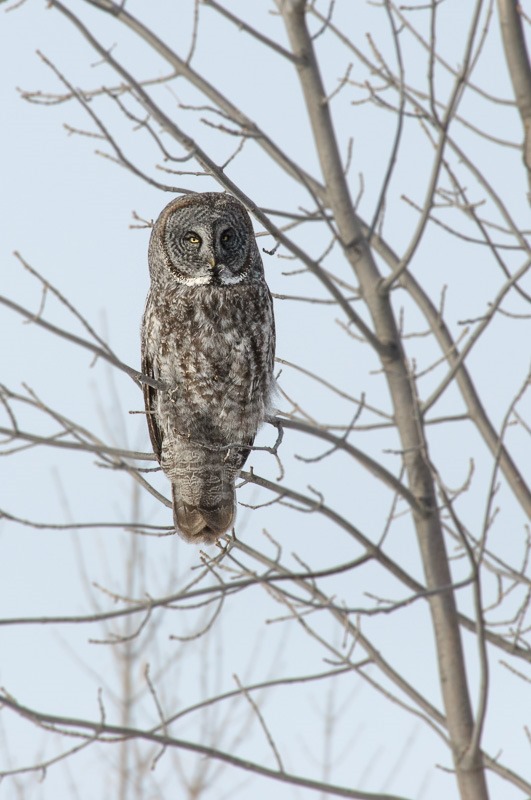 As it turns out, this year the owls are snubbing the reserve and prefer to go hunt near the road a bit north of Winnipeg. Good for me, I started to get tired of the road to Pinawa.

Now, for those who follow me on Facebook, some of these pictures will seem familiar. Basically because I already posted them there

. Posting online also gives the impression that taking pictures of these magnificent animals is a piece of cake. This is not to say that I am a pro and can shoot anything, nor to whine about how difficult it is and that my pictures are masterpieces and ones of a kind. 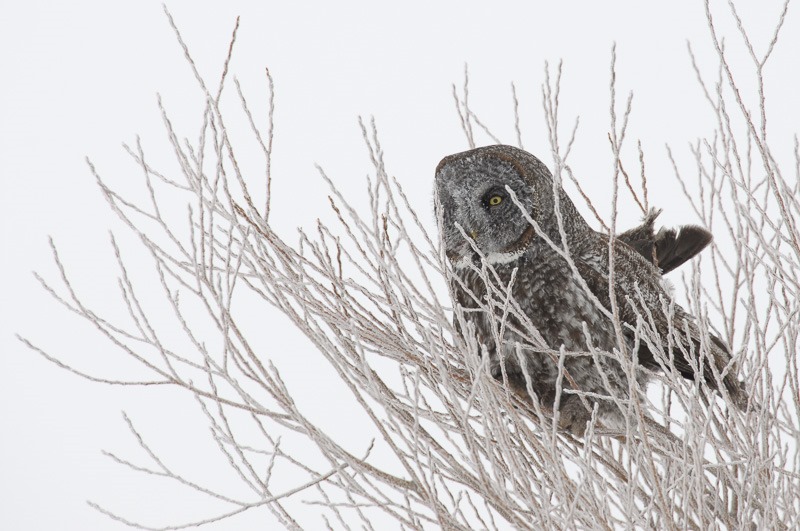 It does show that each type of picture has its difficulties to overcome. Wild animals are mostly unpredictable and as such difficult to photograph.  Lucky for me, the Great Grey Owl is not the most mobile bird when it is hunting. Its hunting mostly consists of sitting still on a branch and overhearing the snow around it. Once some prey is located under the snow, more listening is necessary to estimate its depth under the snow. 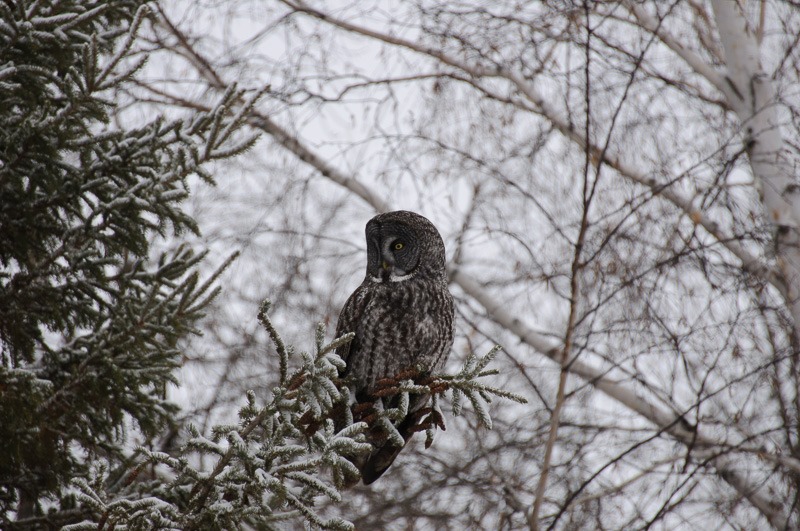 Too many branches and background

On a stormy day, the owls cannot hunt, for us this is like listening to a piano concert during a Formula One race in the stands. In other words, nothing to be heard. For the owls, that translates to “nothing to eat”. So the first thing to do when photographing these birds is KEEP QUIET and most of all keep out of its immediate surroundings. That’s where it is hunting with its ears. 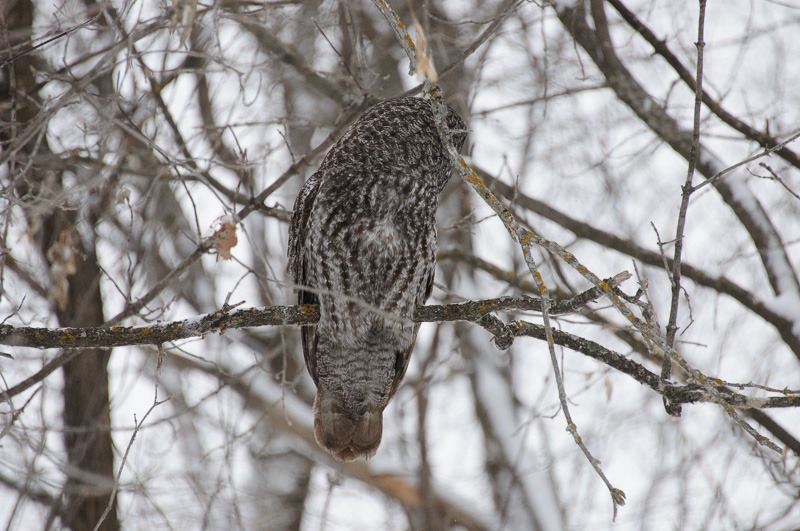 That leaves you with enough time to focus on the bird and get some good shots. Often enough, though, the animal will turn its head a split second before you press the shutter. The result may look funny to some, to me this is just a bunch of feathers. Nothing to write home about. 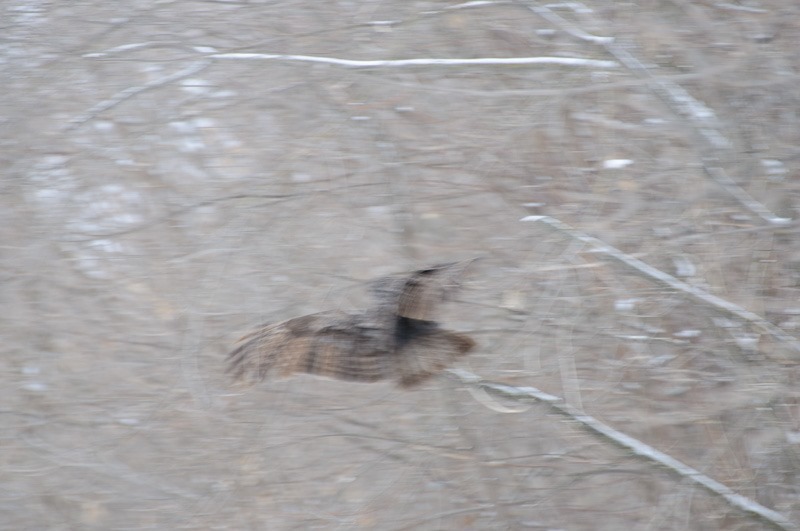 Focusing problem due to branches

Other times, the moment you decide to take another shot, the bird gets up and flies away. Then you’re scrambling to get a decent shot. If you are like any other photographer, you will be shooting with your lowest ISO possible. If the bird sits still, a 60th of a second is good enough to get a great shot. In flight, that same shutter speed is not enough, unless you want the picture to look like the one above. 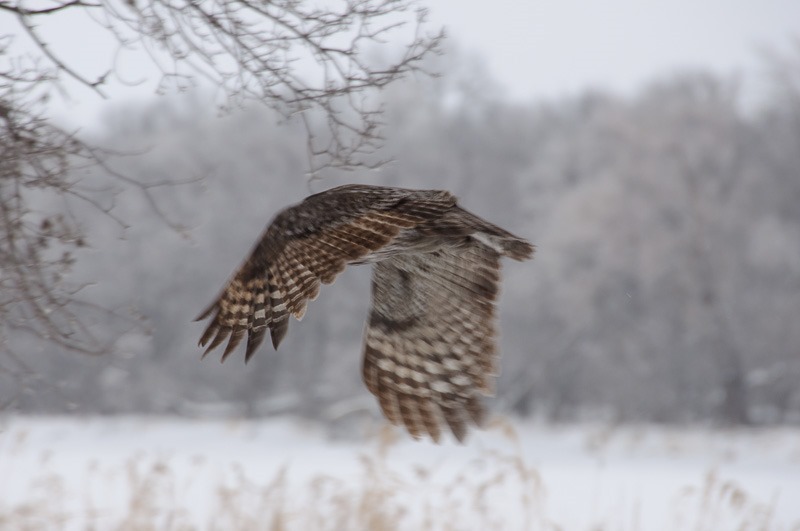 Cranking up the ISO will help. But don’t be too conservative, go high and get something. Pictures like above are not to be displayed or printed. On the back of the camera this looked kind of correct, any bigger size reveals that the shutter speed and ISO were not adapted to this shot. I still have to find the willing subject and the correct settings to get that nice Owl In Flight shot. 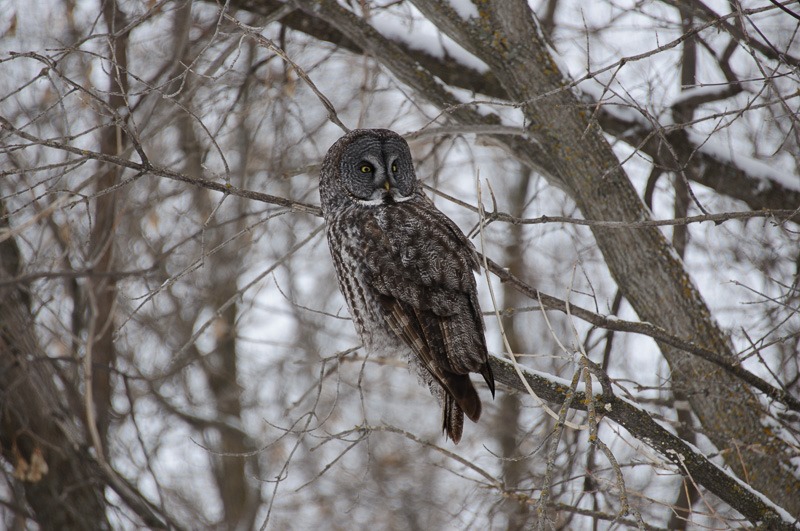 In the mean time, the sitting bird shots get better. If you are quiet enough not to disturb the bird, you can get quite close. Sometimes a quiet “Whooo” alerts you that you’re too close for comfort. The above shot could have been nice, were it not for the fact that the background branches are very disturbing. This shot is for demonstration and ID purposes only. No print to be had here, either. 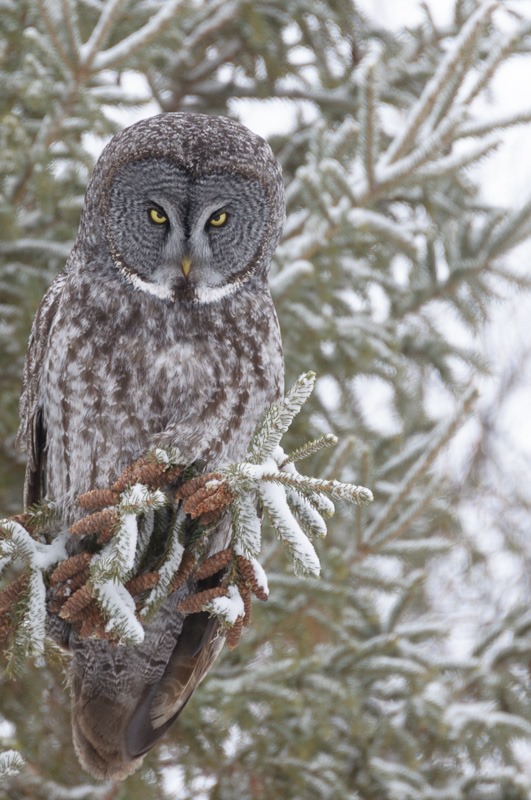 This is the only shot so far that I am happy with. Mainly because of the gaze the bird is using to get me off the road. Believe me, I was still standing on the road, nothing to be had under my feet for this bird

So here you have it. Many pictures that people show on the internet are the best they can present. All the other pictures usually disappear under the delete key. Showing off the best pictures makes it look so easy to get them. But there goes a lot of patience and exercise into taking a good picture. You won’t get them on your first try.