Winter has arrived. Well it’s been here for a few weeks now. It started with a hesitating –4C, then attacked fiercely with lows of –29C and highs of –18C (0F). Then it was time to set my mind to winter mode, even if I wasn’t really ready for it. 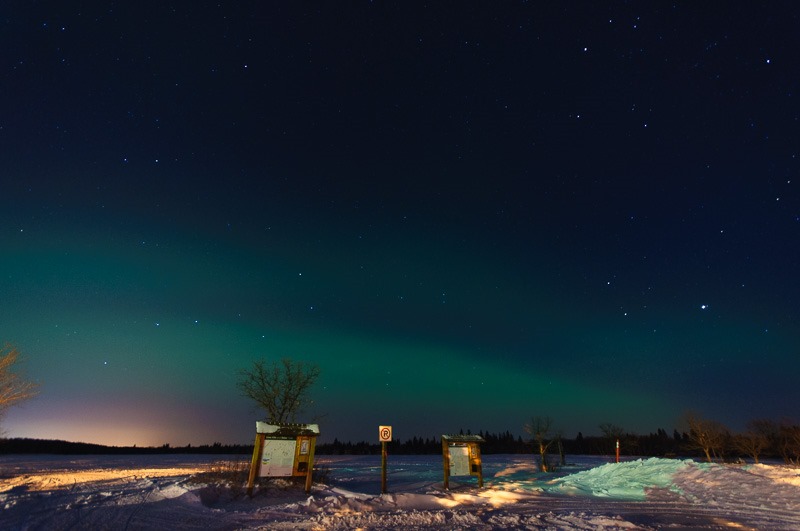 A few nights ago I got my first Aurora for the season. Not that I was expecting it and even less dressed for it. This shot from the parking lot was with a few others, the only one I could bear to take. Walking back to the car with my tripod in my bare hands was more than enough. The tripod burned my hands from the cold. I guess that –29C (-43C counting the wind chill) was a good reason not to prolong the experience.

The next morning I saw the frost on the window pane. To think that the apartment is correctly heated… Well, it was warm enough, but it needed an extra shirt for safety. 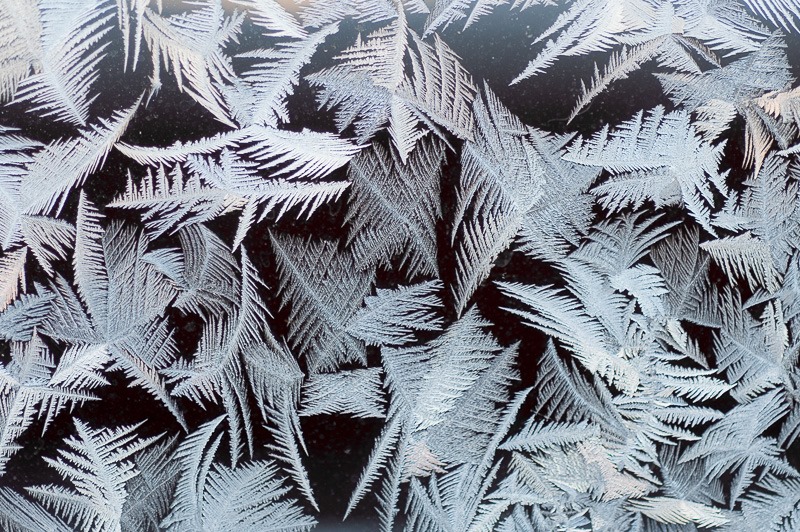 Frost like this is always a great thing to see, not so much to experience inside your home. It literally screams “Winter” and “Christmas” and chills you to the bone

. Then I started thinking about what winter can bring you for photographic opportunities. Since this season is only starting, I decided to dig a little into the previous winter’s archive. 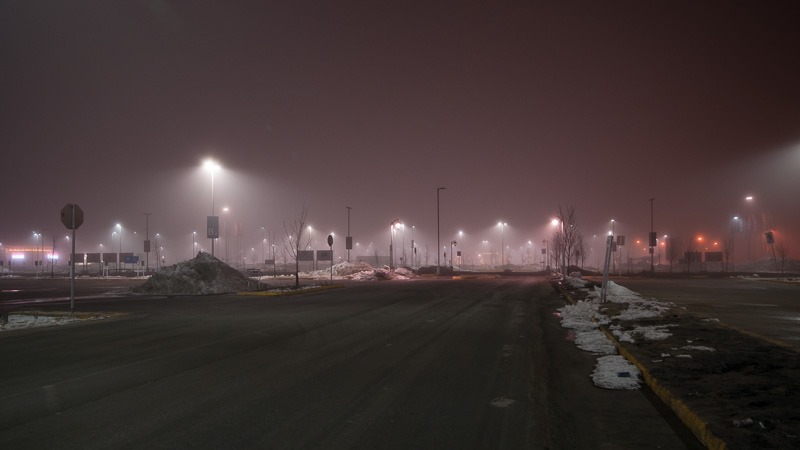 Not that that winter is far away, though. Cold and fog by night. Always a nice play of the light to be had. This one was taken not far away from the house. In a terrain that by now has been filled with new businesses. It makes this shot kind of historic. But then again, you can take this type shot anywhere in the right conditions. 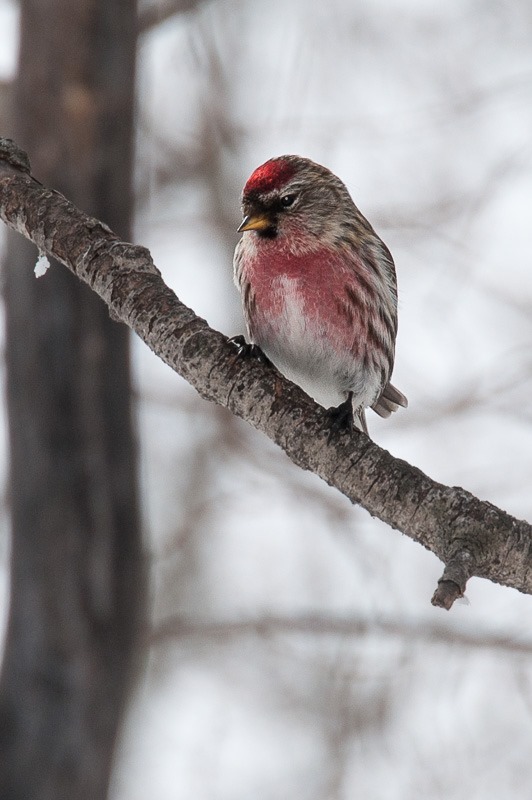 Common Redpolls will soon arrive and pose for all of us photographers in the wild. Small birds like these are not very easy to capture and make for a nice challenge during the cold days. 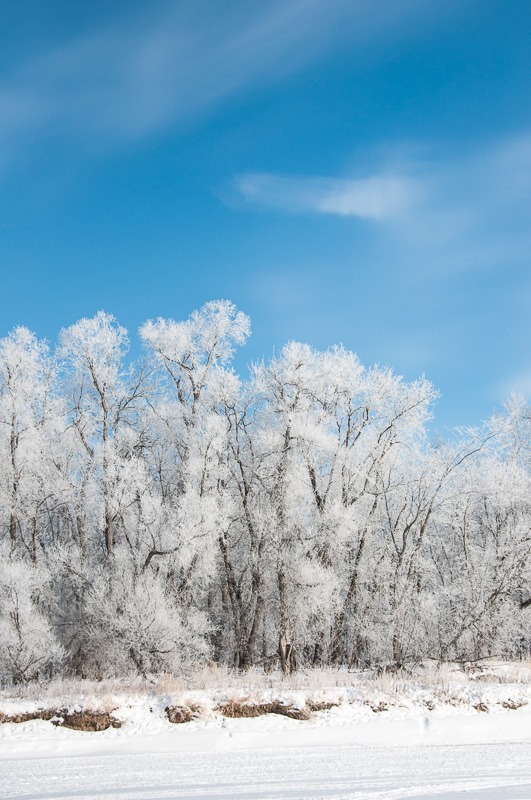 Easier shots, when the conditions are right, are the shots with hoarfrost. Nearly every tree or bush becomes a great subject. Some call it “Low hanging fruit”, others will say that “In winter, everyone takes great pictures!”. Not quite, but close. It’s hard to take ugly pictures when the sky is blue and the trees are white. 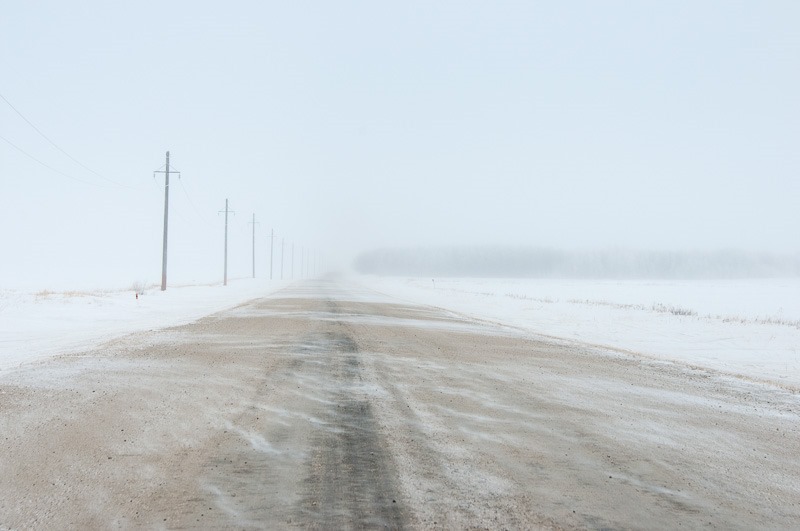 However, in order to get to those “easy” pictures, you have to drive through conditions only Canadians can appreciate to their just values. Unpaved roads are common in Manitoba and so is low, blowing snow. Combine the two and you get driving conditions that need your full attention. This road was pretty empty, so stopping and taking a picture was not dangerous, nor a problem 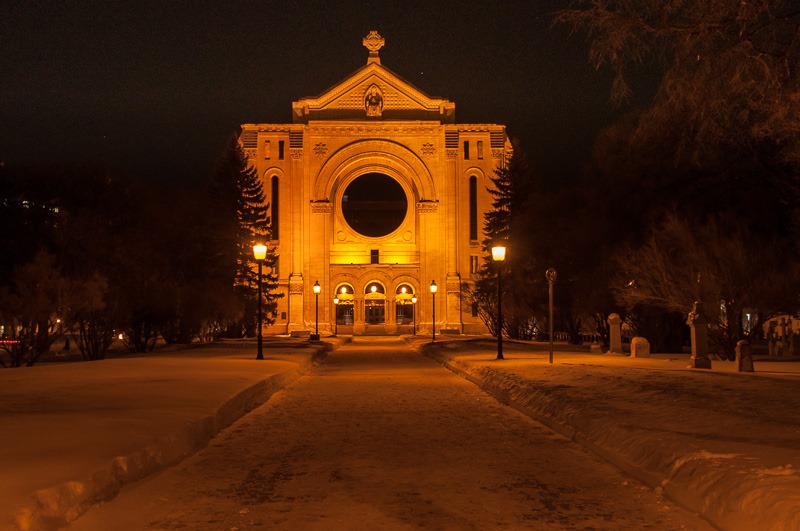 Night shots in winter take on a whole new perspective. Not because of the cold, but more thanks to the snow that makes all pictures way lighter and clearer than in summer. Also, the orange glow makes for a more haunted view of the Saint Boniface Basilica's facade. 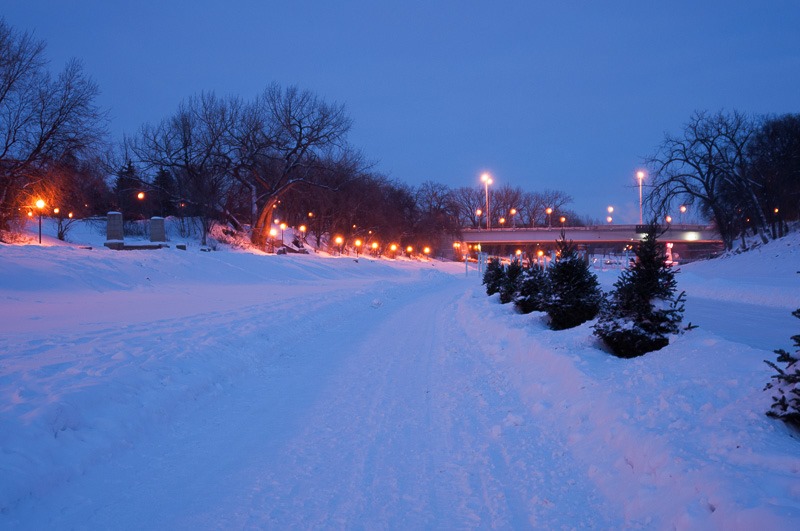 The rivers are mostly frozen in winter, here in Manitoba. Frozen enough to accommodate trucks, bulldozers and people. Trucks and dozers will only stay for creating the paths for the people to use, though. During the “Blue hour”, just after sunset or just before sunrise, the rivers can look like this. The above picture is not colour corrected, so you can appreciate the colour setting of that moment. 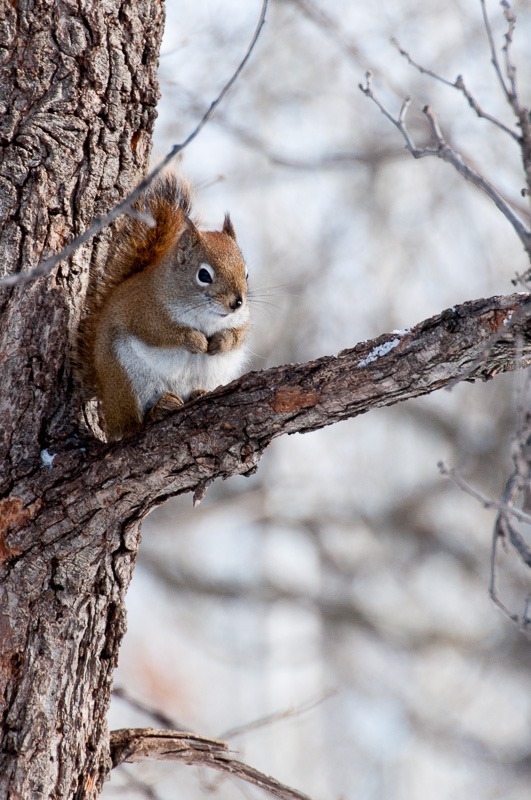 The animal have a harder time of surviving in the wild. Squirrels are shivering and trying to find anything eatable. They become notorious for “robbing “ bird feeders. To the point where some people start buying “squirrel-proof bird feeders”. Let’s make it clear, squirrel proof feeders do not exist. 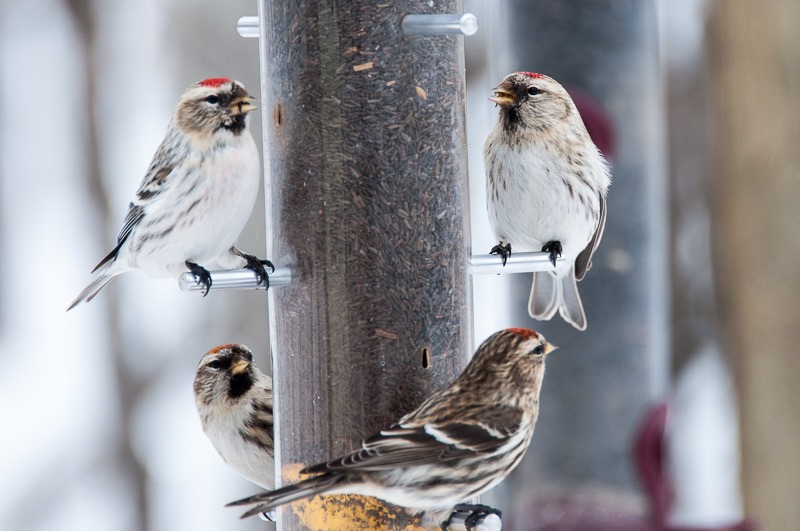 Common Redpolls on a feeder

The only way to keep squirrels away from the feeders is to populate it with enough birds. This little family of Common Redpolls was there long enough to deter two squirrels and give me the opportunity to shoot them in various positions and configurations. 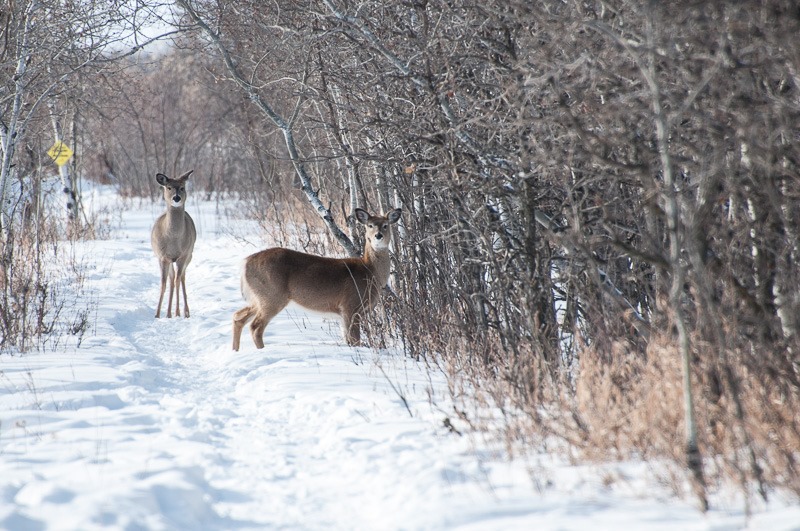 The bigger animals survive a bit easier, although even for them it’s not as easy as it looks. In Fort Whyte Alive, they get some extra feed in the winter as the total surface of the FWA Centre is not enough to sustain that many deer in winter. But, even in those harsh times, it is not recommended for people to feed the deer, they can inflict some serious injuries if they are in the mood.

In the beginning of each winter we start thinking about shooting inside, shooting the Christmas decorations instead of going out. But outside there is still a lot to shoot. You just have to brave the cold by dressing for it. Shooting an aurora like the lead picture of this post without the correct protection is no longer an option.