Everybody knows by now that I am not an early riser. Also, taking night shots is for me a winter activity, not a summer one. But when winter comes, I am outside shooting night scenes. 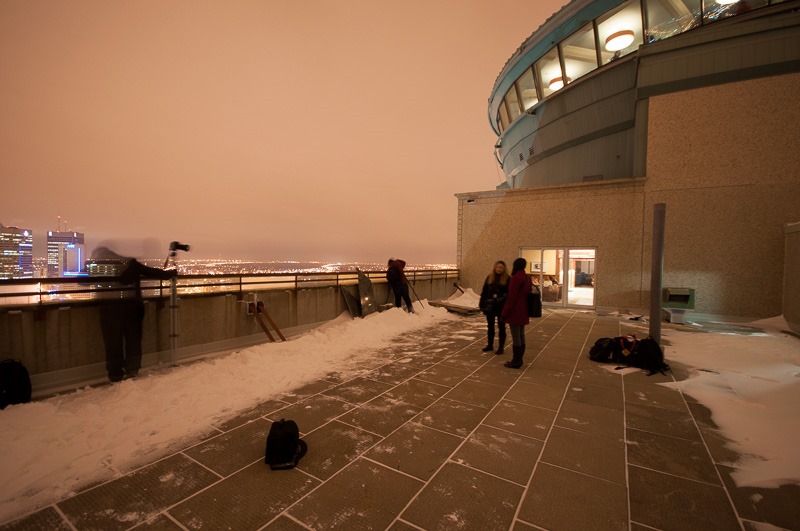 Even better, when the MFF plans an outing on a high-rise in Winnipeg, there is no way that you can keep me away. This time we went up to Prairieview 360, a newly opened restaurant in place of the Royal Crown revolving restaurant.

This high placed restaurant revolves once in about one hour. This gives you more than enough time to enjoy all of Winnipeg and its surroundings while you have some excellent food and drink. 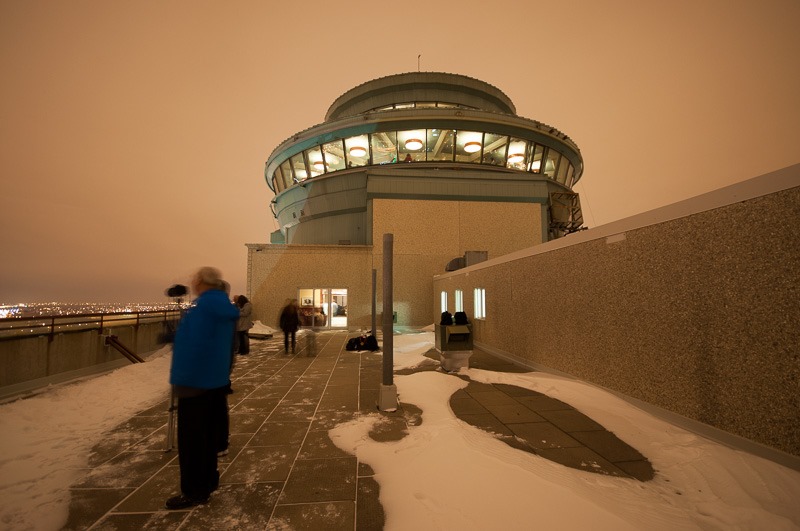 Here you can see the restaurant, while we were shooting on the 28th floor, two floors below the restaurant itself. For once I did not have to blur the faces of the subjects in the pictures, the subjects in question did a fine job with this themselves. The night was heavily clouded, so the sky was sodium coloured. Some people can only experience this type of night time skies, in Manitoba we can still have clear skies at night as well. 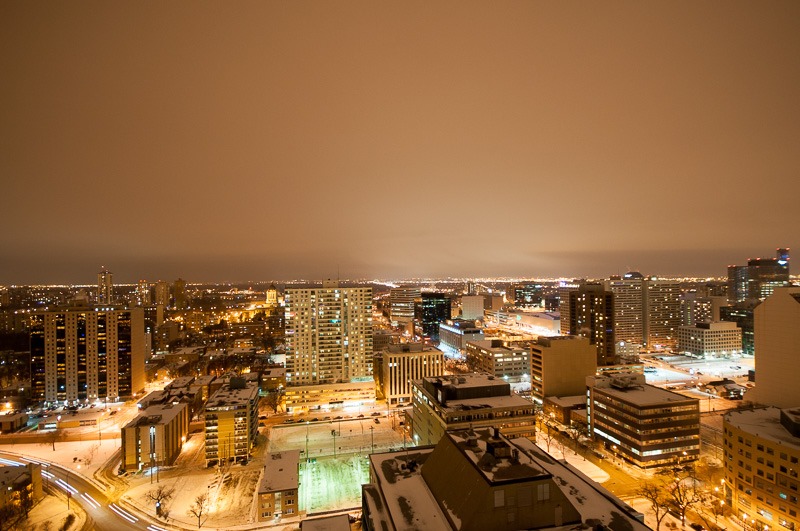 View over the city: west end and Legislature

As for the views over the different sides of the city, they are breath taking. The sky was working with me for a change. I had no intention of removing all that  sodium colour: it was too much. I have already blogged about sodium in night time pictures but tonight it was too beautiful to be removed. 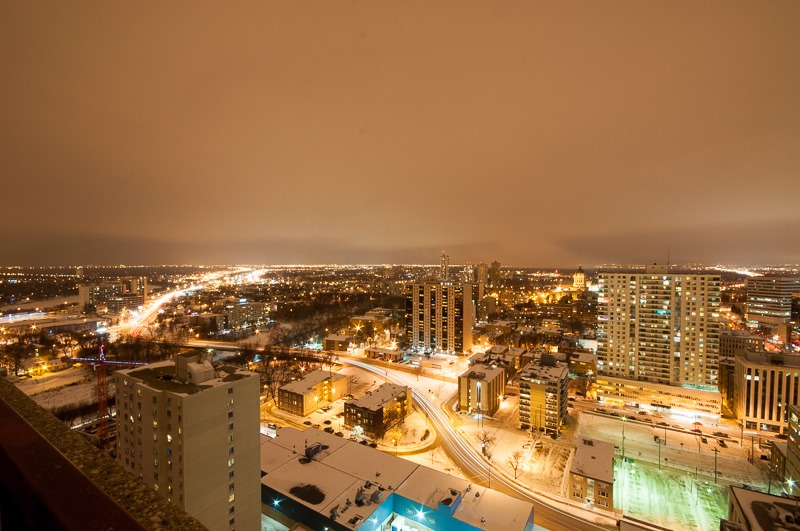 View over the city: Pembina Highway

The cars were leaving trails of light on the roads, oblivious of the photographers up in the sky. In the far sky near the horizon, you can distinguish some snow fall, not enough to become a snow storm. 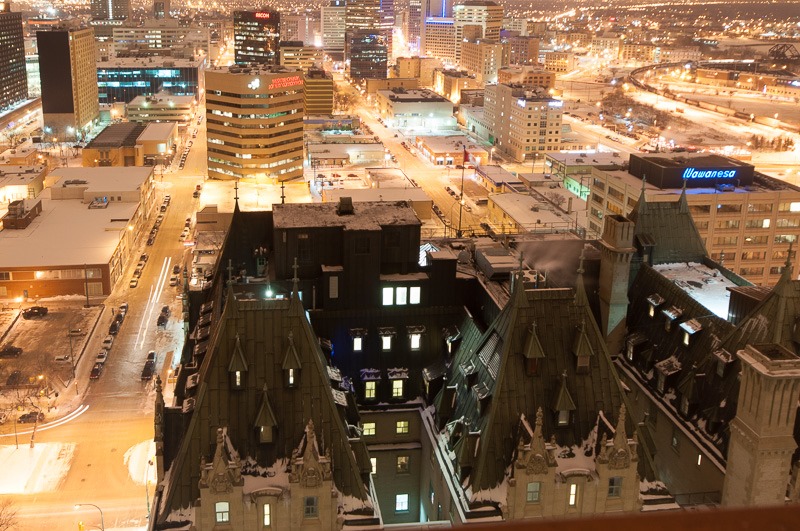 While better shots could be had from the Fort Garry Hotel in the foreground, I had no intention of leaning over the guard rail while there was slippery snow under my feet. Rumours go that some of the rooms of this hotel are haunted. Something that is easier believed with the look from up here than the look from the front of the hotel. After all Queen Elizabeth II has stayed here a few times. I somehow doubt that she had the haunted room, though 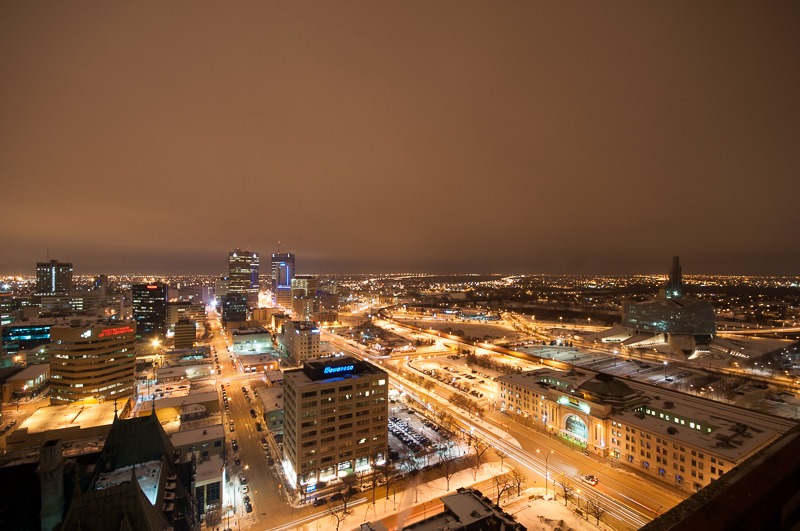 On the other side of the patio floor (28th floor, while the restaurant is on the 30th) you can have a great look over the east end of the city. The dark building on the right is the brand new (not yet open) Canadian Museum of Human Rights. The design makes me think of the Pickelhaube though. So much for human rights. 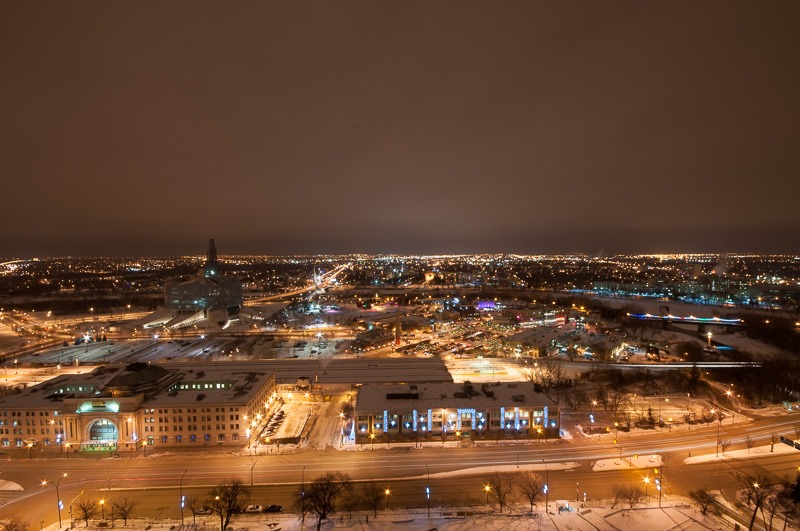 Provencher Boulevard is the straight line of lights that you can see in the background. Union Station in the front and light trails from trains just behind it. All of this with a generous dose of sodium coloured light.

But what about the view from the restaurant itself? Well, that is a great view. More to be enjoyed with your eyes than with your camera. The windows are clean, nice dimmed lights on the inside of the restaurant. Making for… 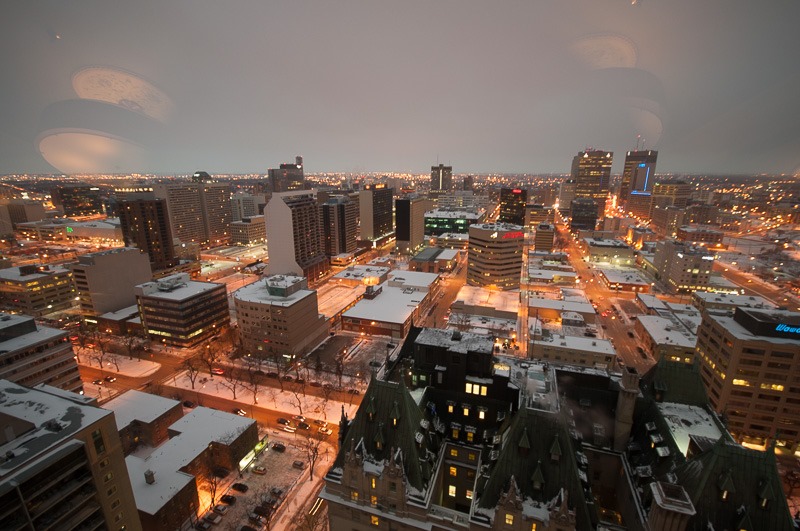 UFO’s attacking Winnipeg. Thanks to the double windows, with which there is no defense against the inside lights. These are lights, not alien ships, even if some would like to pass them off as such.

An excellent evening with friends, good food and a good drink. Great shots from the top of one of Winnipeg’s highest accessible buildings. Other buildings may be higher, but none of the owners can be persuaded to let a bunch of photographers run around on top of them. That’s kind of logical, but a pity for the photographers.