The life we are living is mostly made up out of stress and fast-paced actions. Take a drive through a city and see if your blood pressure didn’t rise above usual. Spend a day in your office and see if at the end of that day you don’t want to trash that telephone or that keyboard. 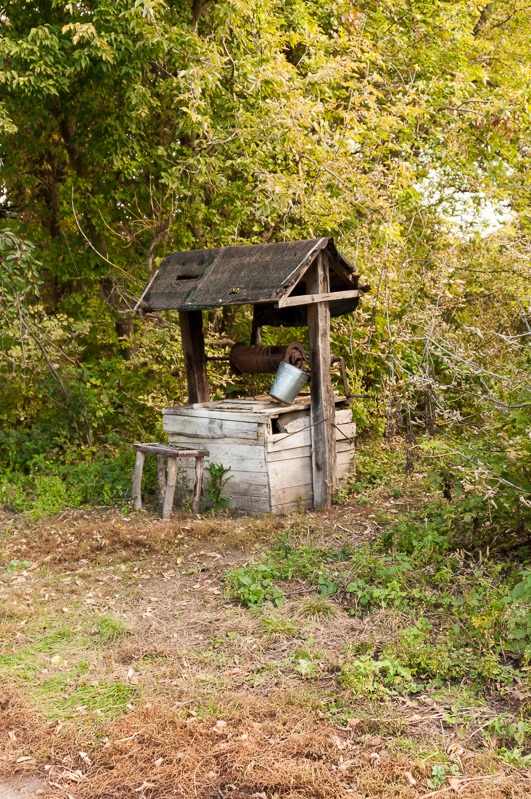 Slowing down is a modern necessity, while in the old days, life seemed slow enough not to need any change of pace. Going to the city was an outing to be noted. Today we are happy to be able to get away, be it on a camp ground, at the lake or anywhere that does not involve modern amenities.

It might not look that dramatic to you, but everybody feels it from time to time: the need to slow down and relax. And not the kind of relaxation you could get in your bed. It might be that you want to do some gardening or a hike in nature. 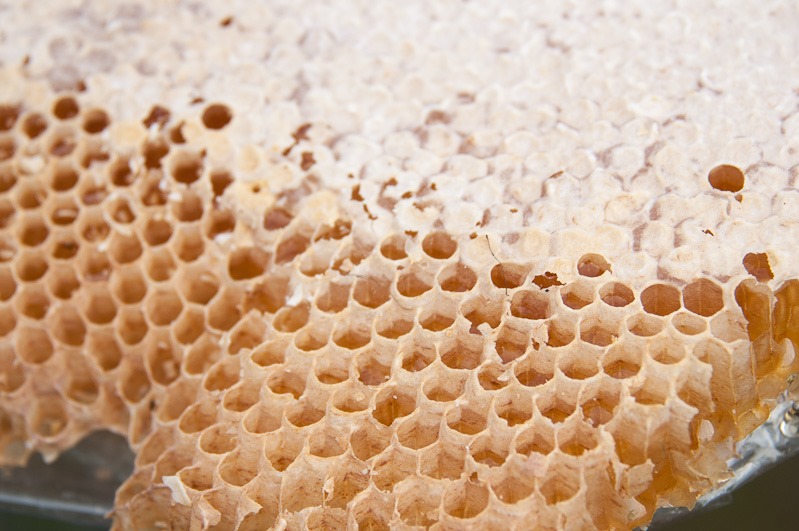 In my case, relaxing involves walks in  nature, photography and even do some work in a garden. This year’s trip to Ukraine left me in a village called Dubinka in the north of the country. While I have been there many times, this year I really counted on the soothing effects of not having any modern amenities. My cellphone didn’t have any reception, computers have no internet and anyway I didn’t take any with me. 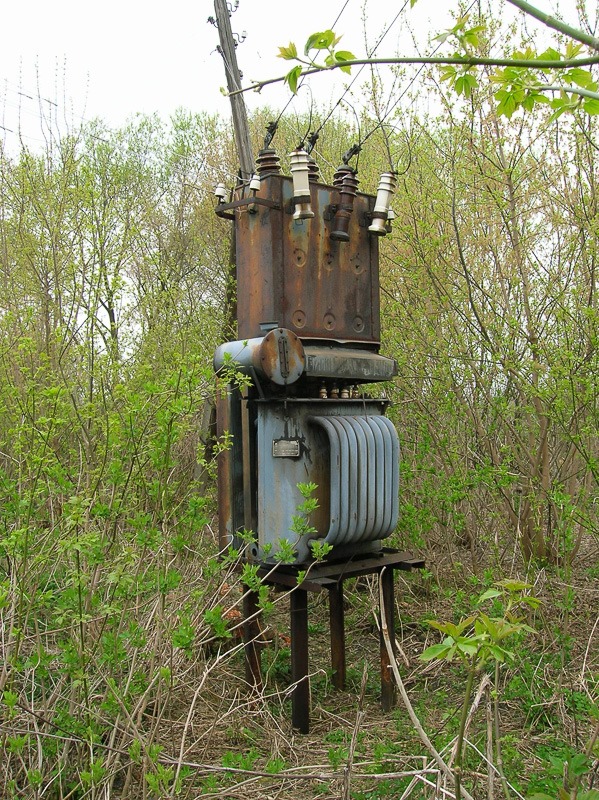 Transformer of a different era, but still in function

Dubinka is an old place, with many old amenities like the water well of the main picture of this post. There is electricity, but you shouldn’t count on it. At least you shouldn’t count on it to be permanent. Every once in a while, it shuts off and you don’t know when it will be back. This is not because of someone switching it off, probably more the result of a faulty transformer. In no case would I risk connecting a computer to it, it wouldn’t last more than 24 hours at a rhythm like that. 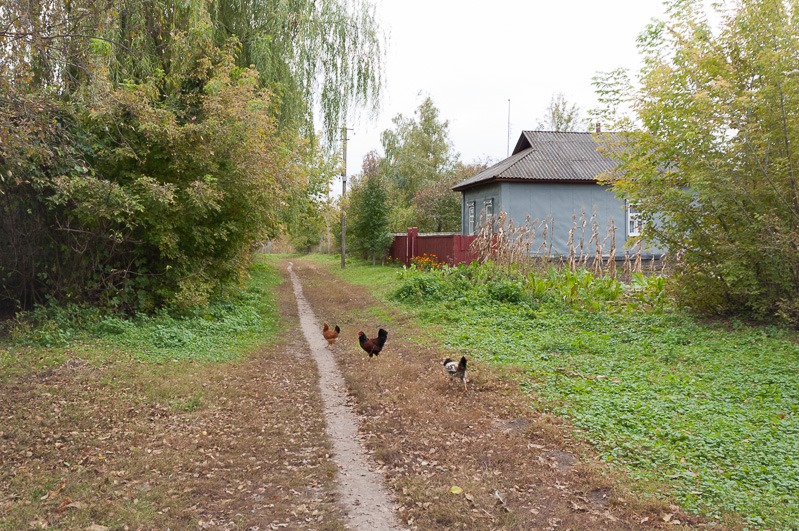 The street is ours!

Then you have the animals, walking in the “streets” as if it belonged to them. I guess that that’s true, the streets belong to the animals. Nigh a car to disturb them. When the time comes the train unloads a number of passengers they move away, only to return a few minutes after everyone has moved on. 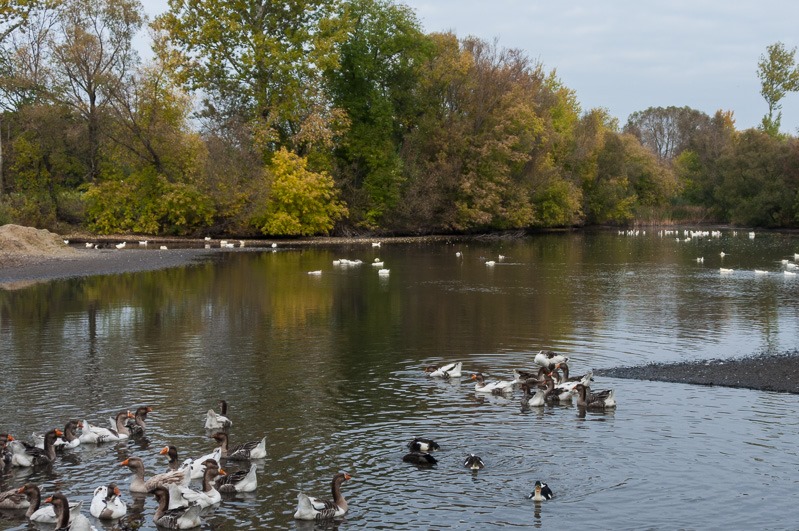 Other animals are kept for more obvious reasons. Geese fetch a nice price on the markets, it makes sense to take care of them. Those geese look nothing like the Canadian Geese we know here, they make me think of “Sam the Eagle” in the Muppet Show of the ‘80s. The pond looks different from previous times… perhaps a lack of water. 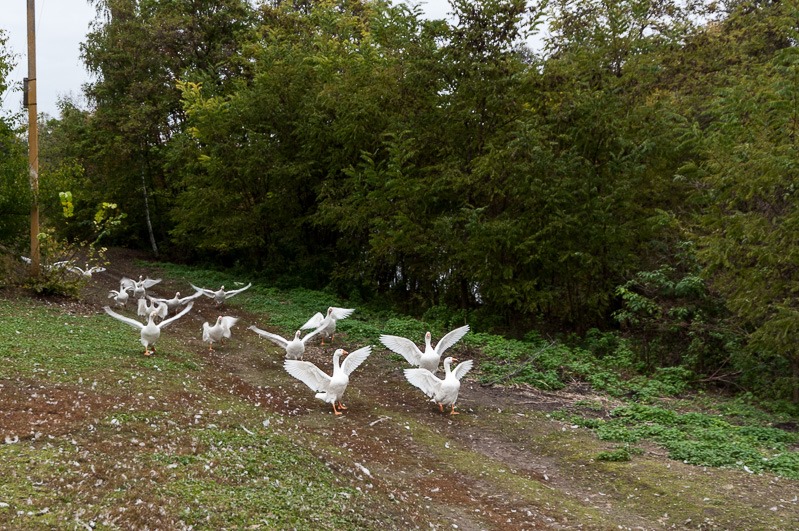 Homecoming of the geese

The geese roam around freely. Interestingly enough they also return to the house wen called. These guys came running back to their owner. Then stopped brusquely when they saw the strange photographer. This is the moment they tried to stop, skidding on the grass. 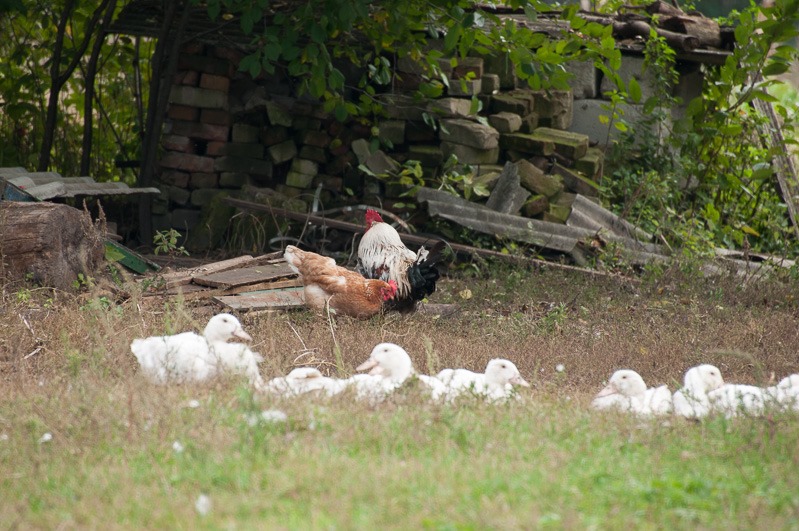 Smaller birds like chickens and ducks also roam free, nobody is interested in keeping them inside. Besides, free run chickens have better taste, right? They also have more muscle and are tougher to cook. Trust me we’ve tried 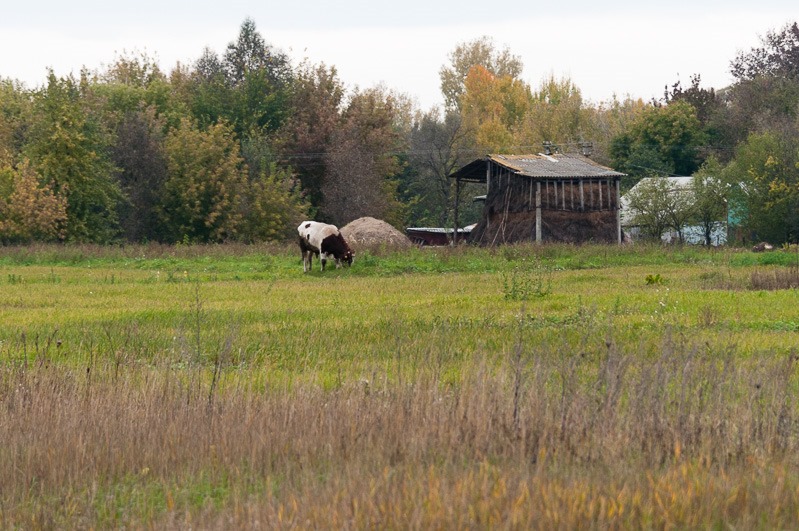 The bigger animals are not there for the slaughter, more to get milk on a regular basis. The cows still live an easy life, without the stress of giving hundreds of liters of milk per day.

And then there is the “work” in the kitchen garden… There are many aspects to this work, of which many are not for the lazy programmer like me. 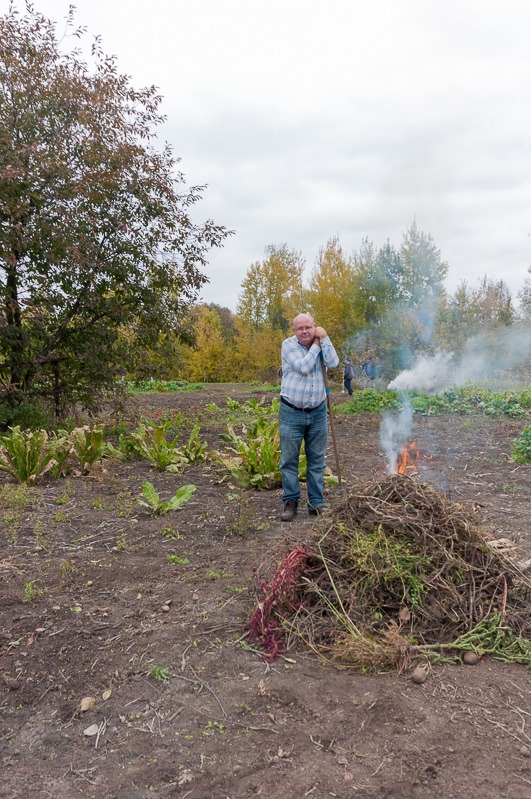 Building a fire from old leaves and branches, no problem. Also, the pitch fork had a rustic feel to it. It was made out of a decades old branch, not the usual machined job here. 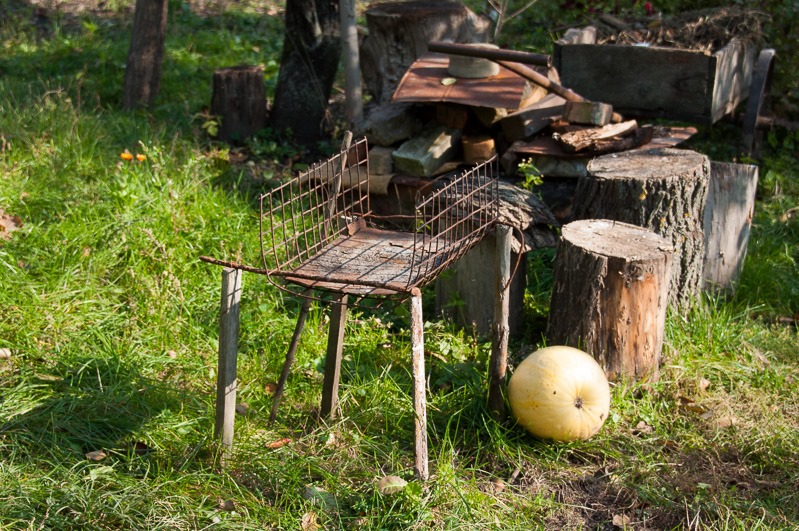 And last but not least, the promise of a nicely grilled piece of chicken on the barbecue. The bbq here is a piece of home made craftsmanship, also not the store-bought type of material

. We have other types of cooking ware too in Dubinka, but that is the subject of a future post.

None of the things you can find in Dubinka are of the stress-inducing kind, an ideal place to spend a few days to recharge your own batteries, not the ones from your computer or your iPhone.