The first time I came to Kiev, Ukraine, I was overwhelmed. That was ten years ago. There were so many differences between the European cities I was used to and this city, it was simply too much for words. On one occasion I was even questioned by Militia, the local police, to know if I had been taking a picture of them. 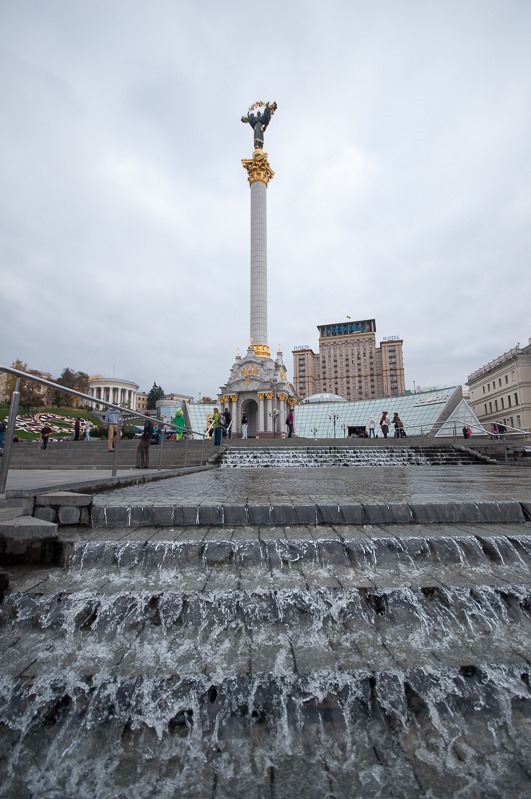 At that time I only had a throw away film camera, so I couldn’t show them what I had. They let me go. Today, ten years later, it is very normal for anyone to take pictures in the city, although it is not recommended to take any pictures of the Militia, even now.

This time, the weather didn’t really cooperate for sunny, summery pictures. After all it was the beginning of October. I was surprised that most of the pictures I have been taking were with my 10-20 mm instead of my walkabout 28-300mm.

While we were waiting for a friend, I decided to walk around a little and shoot some daylight pictures. 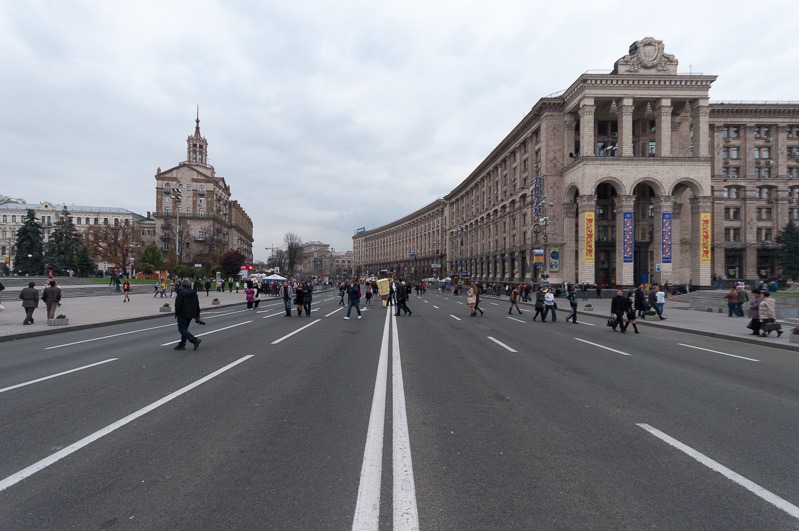 We arrived around 5pm on a Saturday. During the weekends, Khrestchatyk, the main street of Kiev is closed to traffic. A few things hit me when I was walking around in the city. First of all, all road signs and street names have been translated into English, making it easier for anyone to get around. Tourist friendly, we shall say. If you have read some of my previous posts, you will undoubtedly recognize the above location as Maidan Nezalezhnosti, or Independence Square. 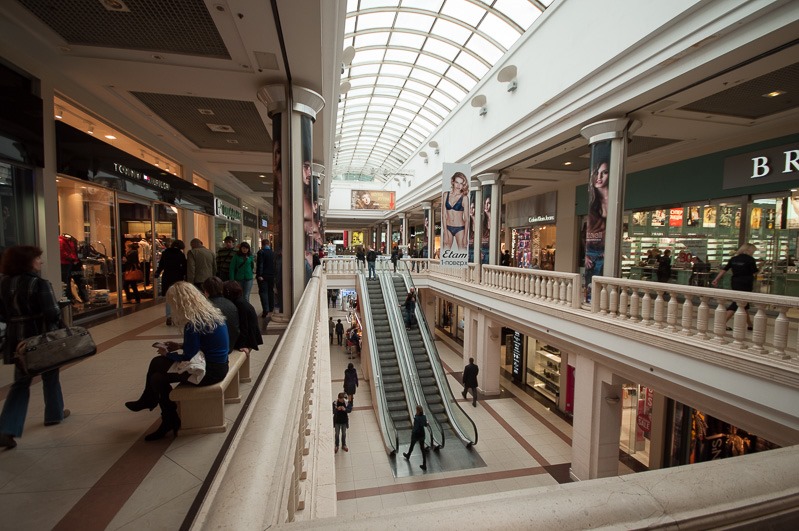 On Maidan, or better said under Maidan, lies a big shopping center called Globus. It looks exactly the same as all the other European shopping malls I already knew from my days in and around Paris, France. Apart from everything being in Russian or Ukrainian, the brands are all European. A nice change if you live here. Until you see the prices of the goods. These are also European, and mostly out of reach for a standard income. 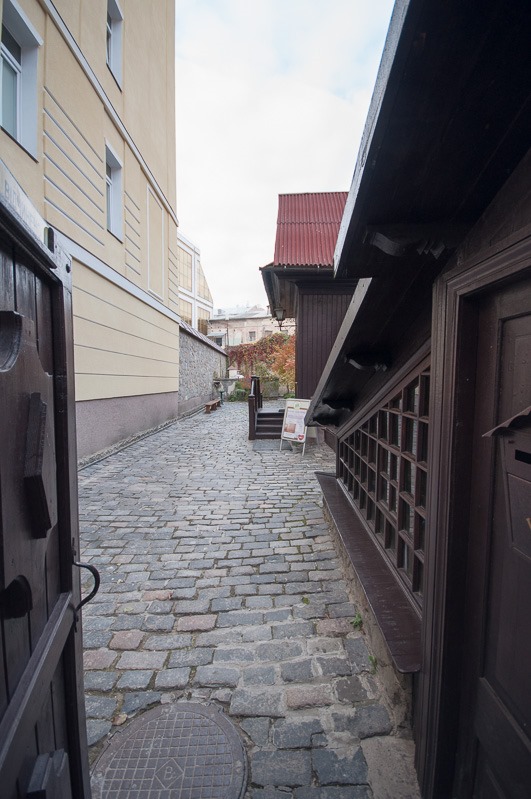 So, I went back up, our friend had joined us for a nice walk around the old center of the city. The above little court was all I could catch from the old house of Taras Shevchenko, a world famous Ukrainian poet of the 19th century. He lived here around 1840. There are statues all over the world of Taras Shevchenko, including in the Leo Mol sculpture Garden in Winnipeg. Also because Leo Mol was Ukrainian… 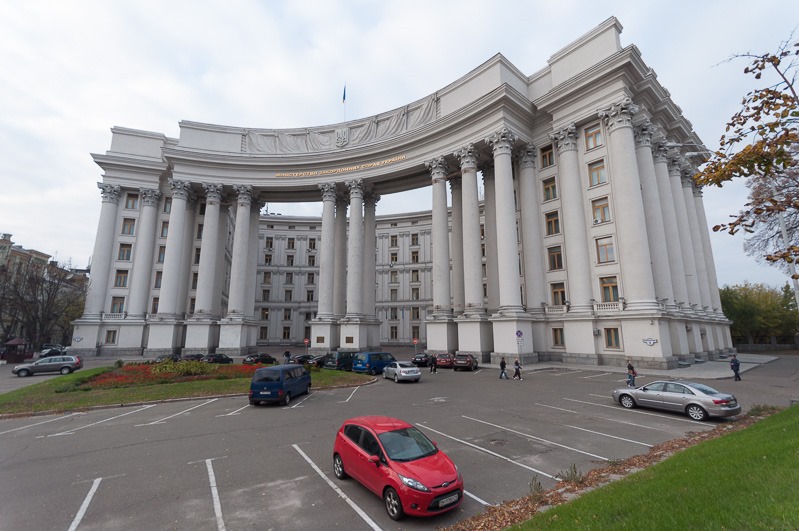 A few steps away is the building of the Ministry of Foreign Affairs. You can see that this building is made to impress anyone who gets close. Today you can get really close, but time, like the weather was not really on our side. 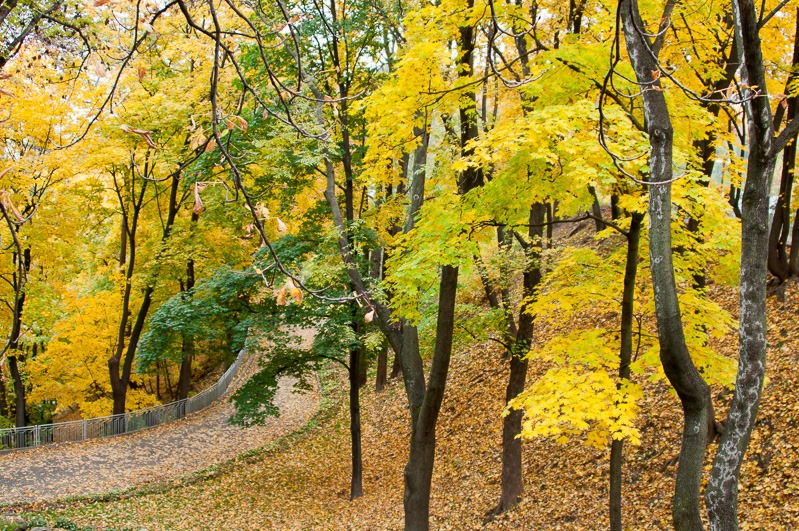 Continuing the walk, we arrive high above the banks of the Dnepr river, where fall colours were greeting us like a breath of fresh air. Like many European cities, everything is close at hand, nothing lies miles and miles away from each other. While Kiev is a stretched out city, the city centre is old-fashioned Europe: all build nearly on top of the next building. 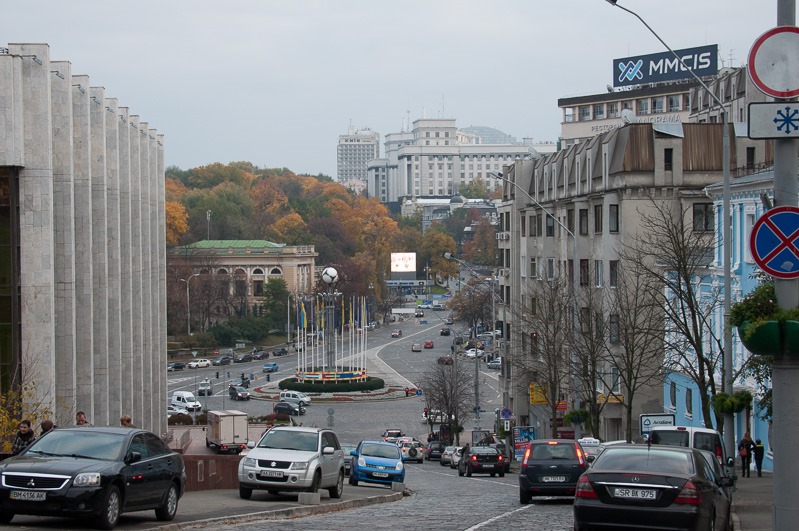 Looking down over the start of Khrestchatyk and the National Philharmonic Theatre, the building with the green roof. As you can see, traffic as well as parking is kind of a problem in this city. After all, it was mostly built during a period where cars were not available for everyone. Today parking spots are hard to come by. 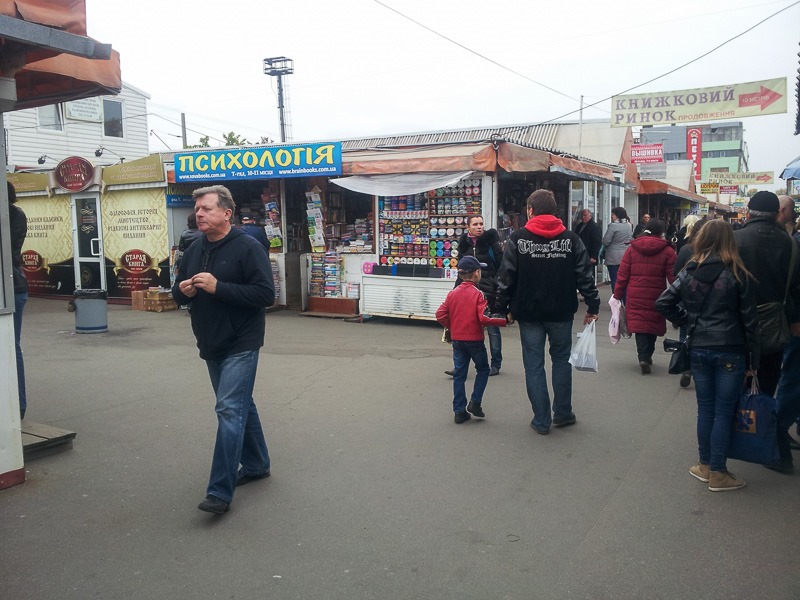 The next day we were off to a book and media market called Petrivka. Petrivka or Petrovka in Russian is a large media market where you can buy anything new and second hand. From books to Windows 8.1, including a “license”. When I lived there and came to this place to find books and software, often I was asked if I was American. The one time I said Yes, they refused to sell me anything. Piracy is big business, but apparently also a risky business when the USA is involved. Again, like on the smaller markets in the country, taking pictures was quite frowned upon in this place. Hence the kind of washed out picture of my cellphone. 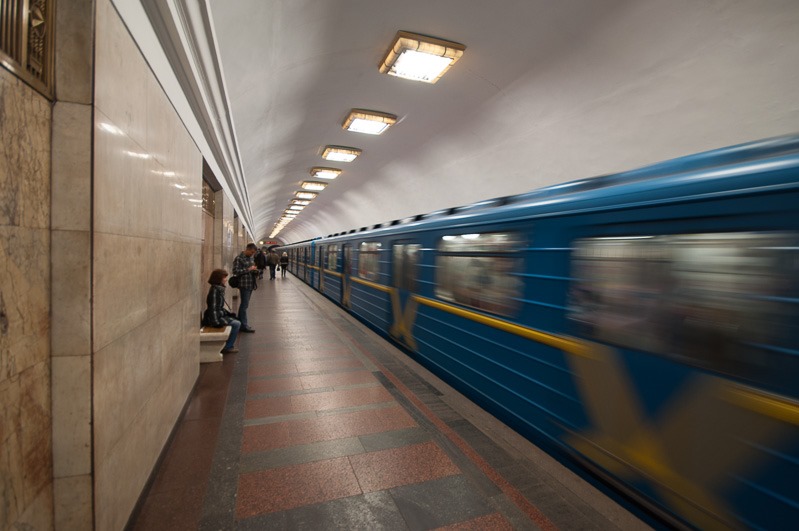 The metro or subway system of Kiev is old but far from broken. It is always kept in good shape, I have never experienced an interruption in service due to some maintenance problem. The above station is called Arsenalna or Арсенална in Ukrainian. It is named after the Arsenal above ground in this place. At the same time, this is the deepest subway station in the world, it's 105m underground. 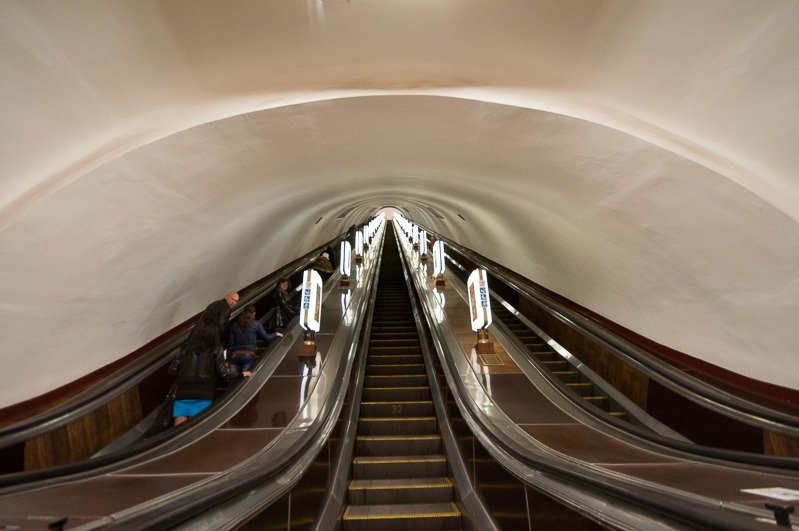 When you are this deep, you need huge escalators. I have never seen these fail in the years I was here. They take you up in about 5 minutes. The above picture is the bottom half of the escalator set. Another set above this one takes you to the surface. 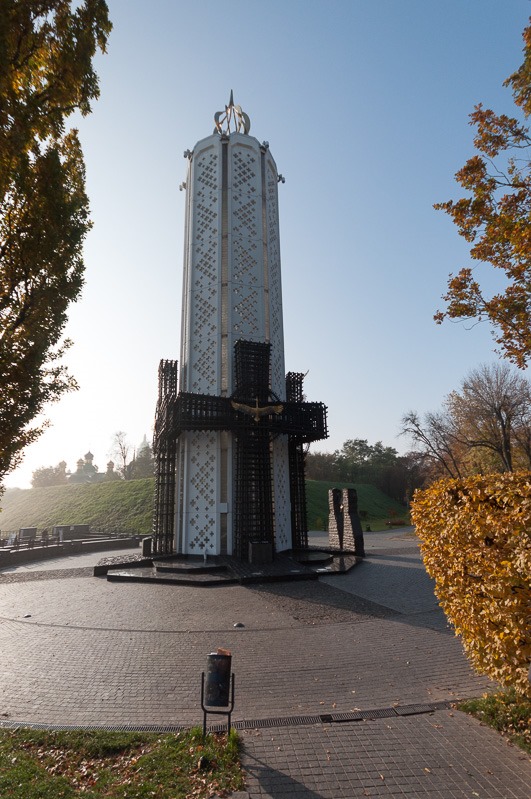 Monument to the Holodomor

And when you get to the surface, well the world is a bit different. It looks like well kept buildings from the ‘60s and ‘70s. And at the end of the street starts a park called Park Slava, or the park about war and hunger. Ukraine was hungered to death in the 1930s by Russia, a genocide that even today is hardly acknowledged by Russia. The “Holodomor” or “Extermination by Hunger” took millions of lives. The above monument is a symbol of this period. It was completed only a few years ago, I had only seen the place under construction. 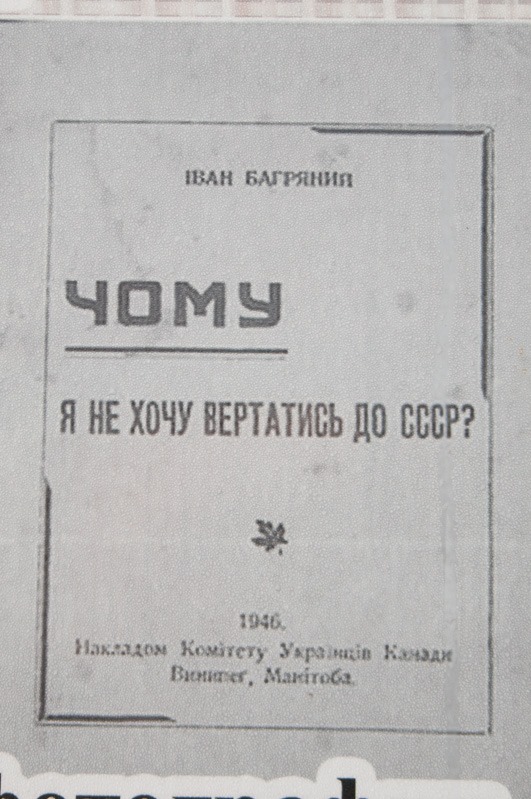 “Why I don’t want to return to the USSR”

Being from Winnipeg (now) I was surprised to see a poster there with this book cover titled “Why I don’t want return to the USSR” by Ivan Bagriania, in an “edition of the Committee of Ukrainian Canadians of Winnipeg, Manitoba.”

I tried to find this work on the Internet, but without success.

Another walk in the city, more stories to tell. Kiev is a great place to be, even more if you know a little about the history of the different places. There is more to this city than golden domes, after all.