Walking around in a far away city with a camera is always good. Even more if the city is photogenic. However, when you are far far away, you probably don’t have a tripod with you. So you have to resolve to other means of stabilisation. Or not? 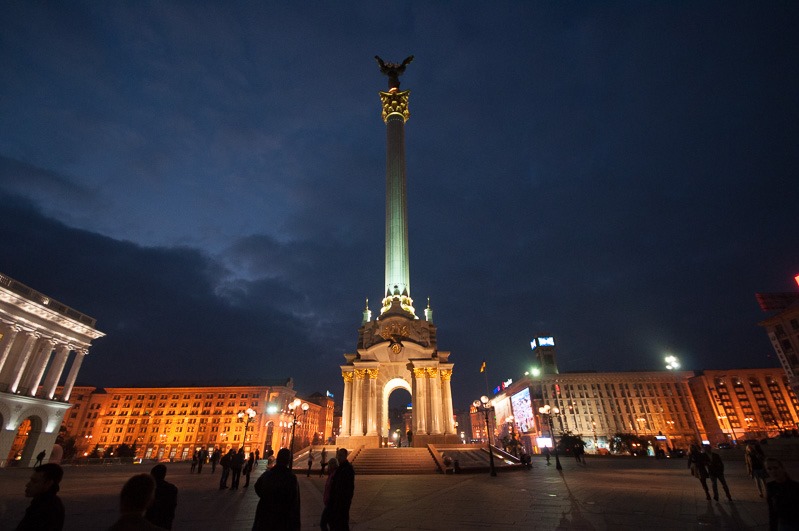 When I came out of a coffee shop ( coffee, nothing else, eh! ), I was greeted with this view of Maidan Nezalezhnosti (Independence Square) in Kiev. The same spot of the now famous Orange Revolution in Ukraine in 2004.

On a trip like the one we made over four weeks, I don’t take a tripod with me, too cumbersome and of too little use/usage. So I needed to find other ways of taking the pictures. I limit my camera (Nikon D90) to an ISO of 1600. That still delivers pictures good enough to publish and to print in small sizes. Higher ISO values are of little use though. 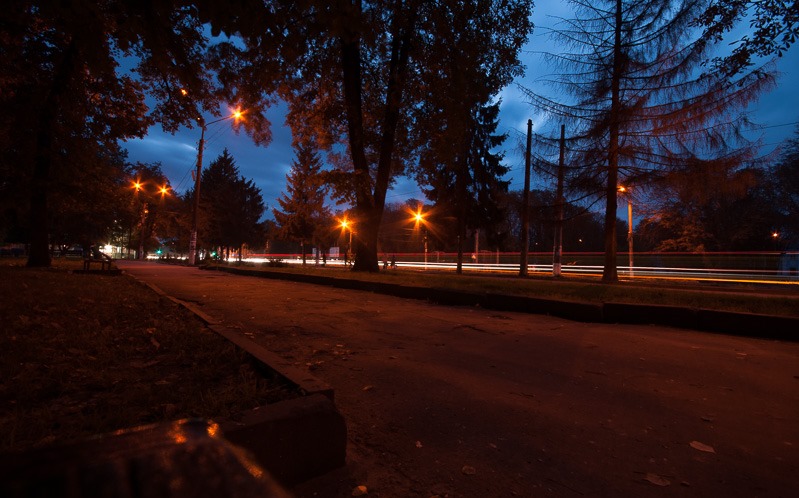 The first way is to put your camera on something stable like a bench. Usually they are stable enough, but better to test them first anyway. I have had some “strange” experiences in the past with rotten benches… The city of Konotop in the north of Ukraine has the habit of switching on the street lights when it is DARK, not when the sun sets. While I was taking a picture of the dark street, the lights came on hesitantly. The second shot was the one above. You can still see a piece of that bench in the bottom left corner. Obviously beggars can’t be choosers, so once the camera is stable you may have to crop the picture to straighten it. 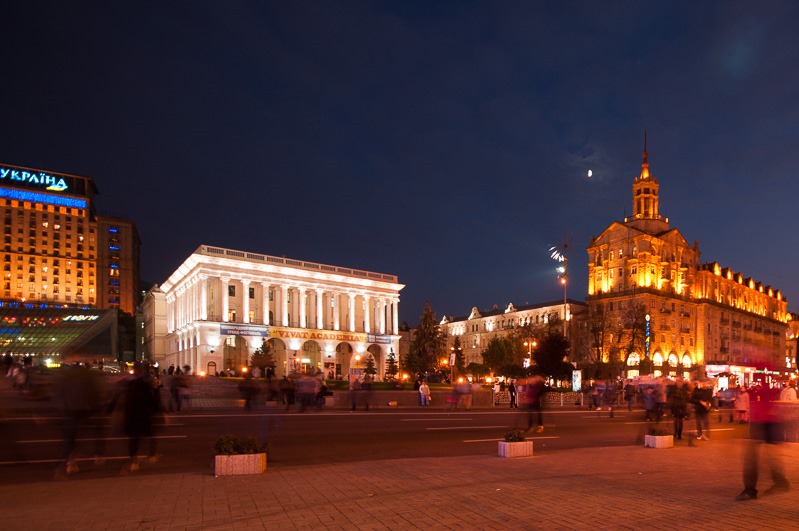 In Kiev I had no way of stabilising the camera, except for this picture. A small parapet allowed for the camera to stay still for about 13 seconds. That gave me all the ghosts of people floating by. I always thought that people moved faster than that and I would be able to get a clean picture… Never thought that people talking and standing still would show up 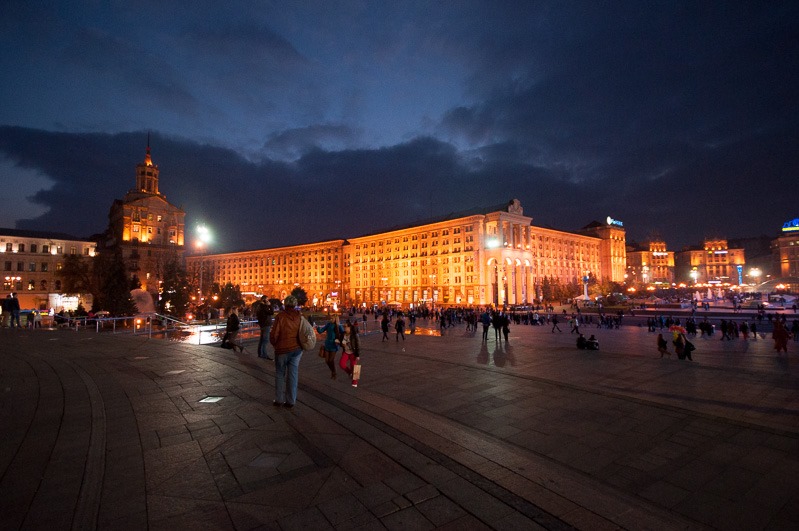 The pictures in this post are only slightly color corrected, unlike here where I filtered out all the sodium. The sodium colour was really present in the light, even my eyes were seeing it instead of “correcting” that surplus of orange. 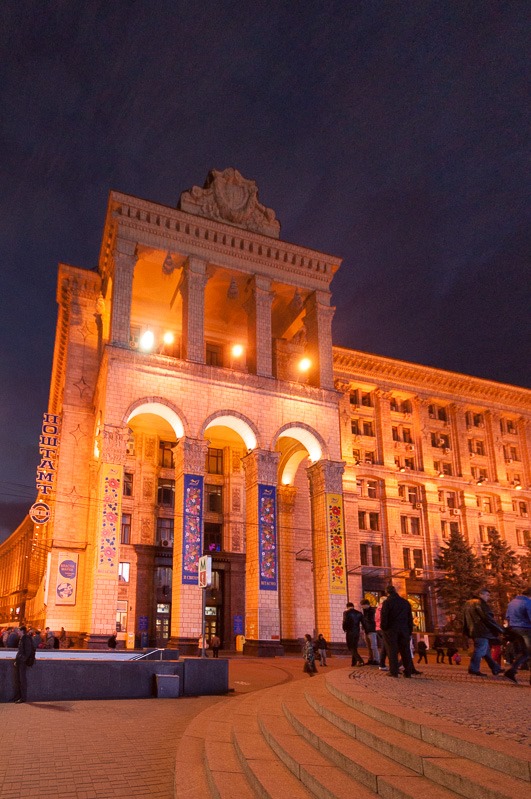 Walking around with my camera here was good, no exception to any unspoken rules unlike here, lots of people were walking here with a camera, even expensive DSLRs. In the picture above you may detect some “noise”, that’s the mottled nature of the stones photographed, not sensor noise… 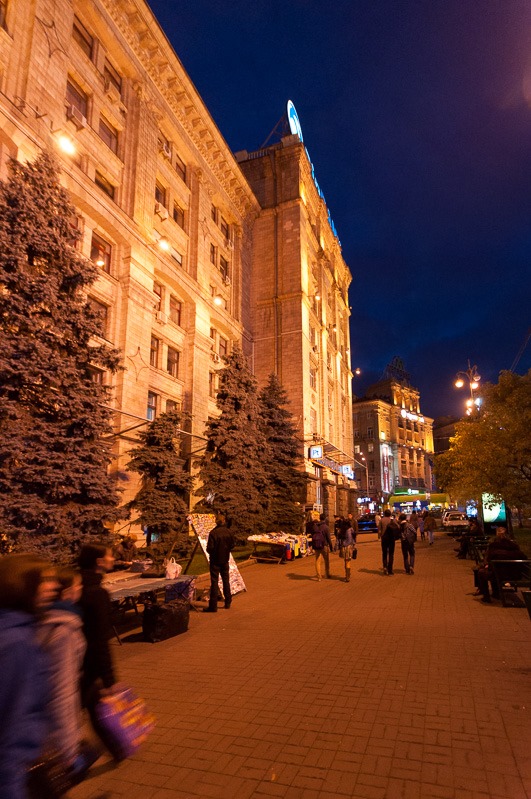 The short walk over Maidan as it is commonly called yielded a nice number of usable pictures. All of them were handheld, some with high 1600 ISO, others with a lower value and a longer shutter speed. Hand holding your camera for 1/15 of a second requires some training and an absence of partying the previous night. It seems I can get away with 1/15th without problems, although usually that requires VR or IS. The pictures here, though, were taken with a Sigma 10-20mm without any electronic stabilisation. 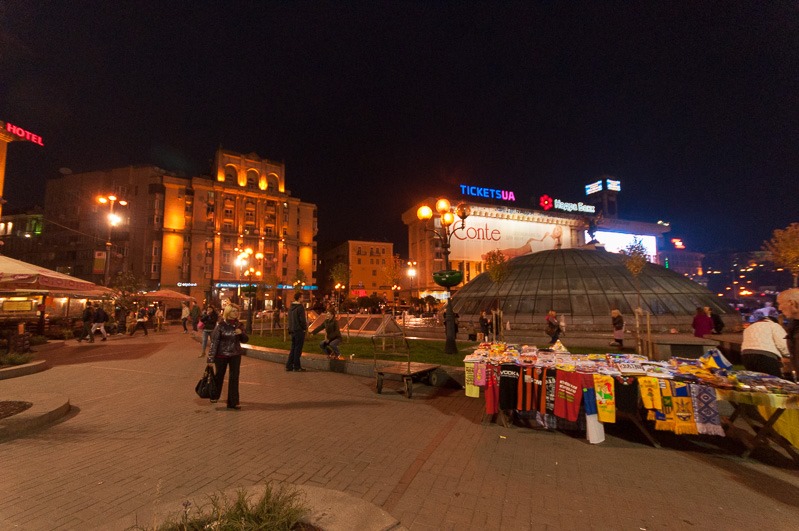 Maidan is quite lively in the evening, that is not surprising. There are a lot of places where you can buy beer or vodka, tea and coffee coming in 3rd and 4th place. Many of the shops are open late and, not shown in these pictures, underground is a shopping complex called “Globus”, a modern place where you can buy all western stuff. At Western prices. You can see the top of Globus on the right. 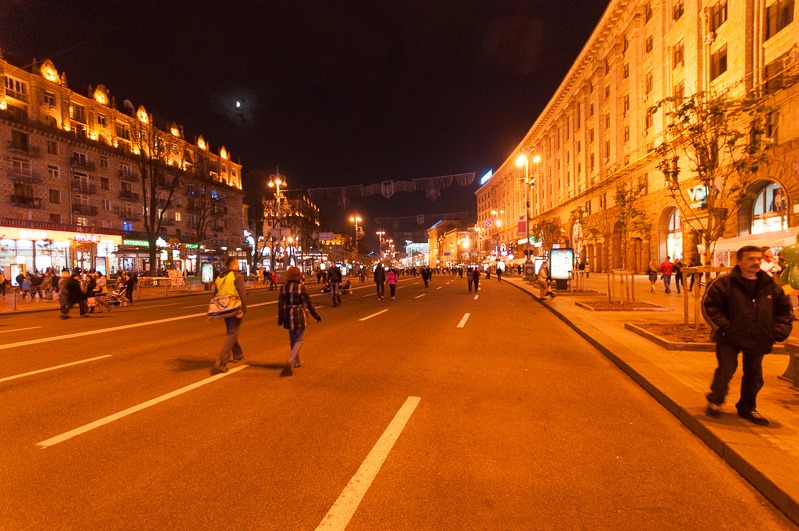 Walking back to the apartment of the weekend, graciously loaned to us by friends, we went over Khrestchatyk, the main street of Kiev. Again, I tried the 1600 ISO technique and got away with quite decent pictures. Khrestchatyk in the weekends is closed to motorized traffic, people can walk wherever they want. A nice touch for anyone who wants to take pictures. 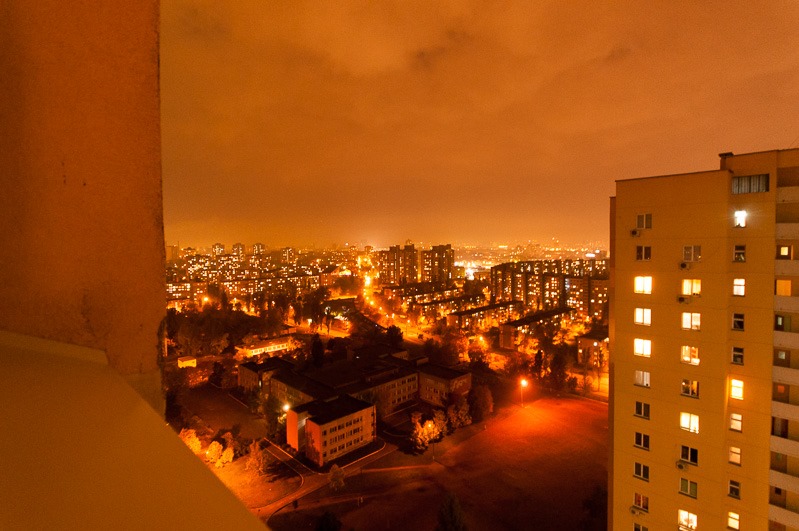 View from a 24th floor

Back in the penthouse apartment on the 24th floor I decided to record a view of the city. Again, no sodium was removed from the picture and you can see that there was a LOT of that over the city. In the picture above you could even suspect heavy snowfall for the night, but none of that came through. This time I “clamped” the camera against the window frame during exposure, making sure it wouldn’t take the 24 floors downward by itself.

This simply shows that for night photography you don’t “need” a tripod. You can still come up with a decent picture. On the other hand, WITH a tripod, many more possibilities open up for you. It’s just a question of balance between usefulness and cumbersomeness during travel. Going to Europe, a tripod is bound to get questions from customs, bound to get in your way in the subways and bound to become heavy during long walks. And how many night shots are you going to get?

It’s a question of balance, I would say.