We probably all know what a church looks like inside, even if sometimes it’s only from a distant memory. Some churches look really simple, some look more elaborate. All of them have their photogenic properties. When you go to Eastern Europe, you will most certainly run into a kind of church that shows much and at the same time little on the outside. 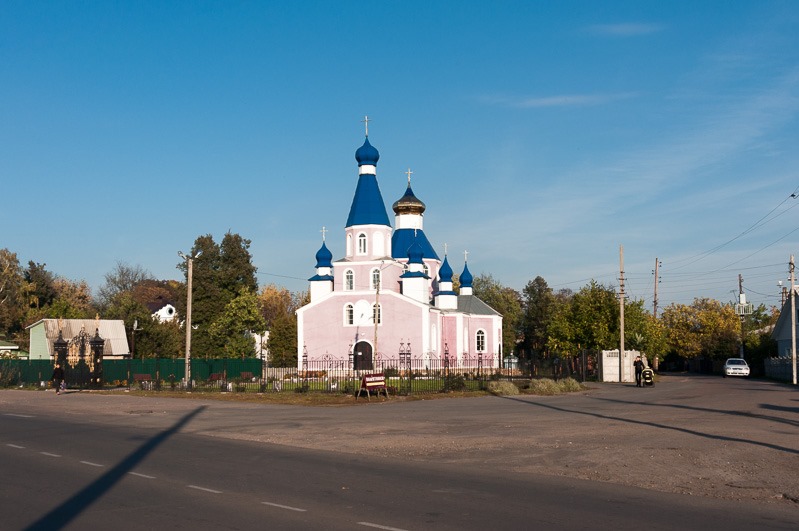 In Ukraine I ran into this church. It looks pretty simple, well kept and not very wealthy. Until you look up and see that golden dome up there.

That dome is made of gold. Not your run-off-the-mill gold plating either, it’s made of leaf gold. Very thin and applied by hand by skilled workers. It is so thin that after some time, that gold is gone and will need to be replaced. Up close that single dome looks like this: 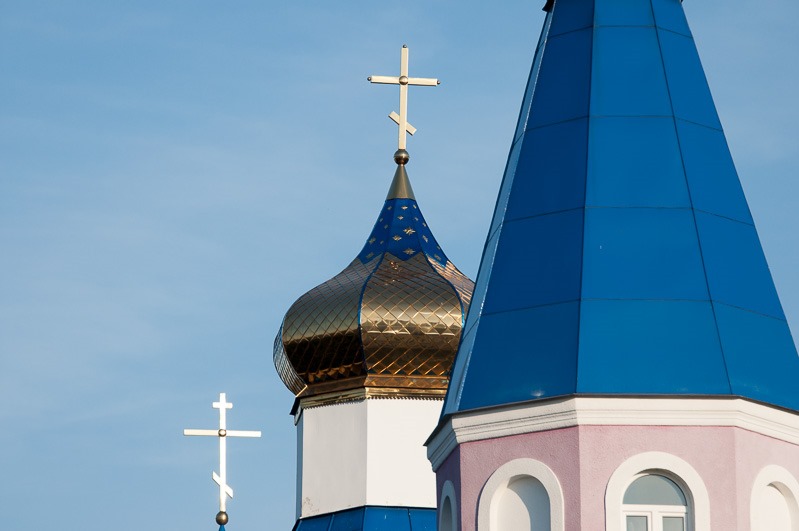 You would say: “Not even a full dome of gold!” . True, but this is a small church in a small town in Ukraine. The church has been finished in the last three years. The last time I was there, three years ago it was not yet accessible. The first time I saw this church about 9 years ago it was also not finished. Apparently a long construction period. 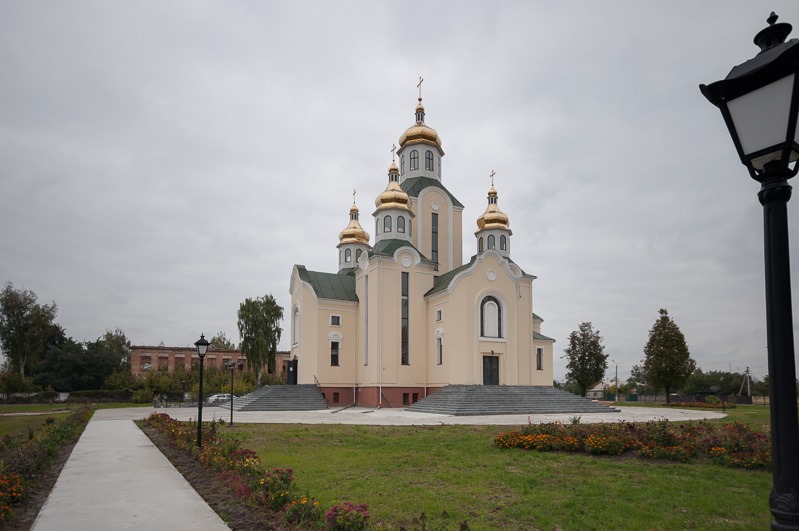 Church of the Holy Mother of God in Konotop

In the same town in a different place, another church was built faster. In fact it’s not even finished yet. Already there are services and visitors.

As you can see, the weather this time didn’t cooperate very much with blue skies. In fact, in the two weeks we spent in Ukraine, only half a day of sunshine was granted to us. So, greyish pictures they are.

When we approached the church we ran into the priest and for once I had a chance to ask if it was ok to take pictures inside. Usually in unfamiliar churches I hesitate to take pictures. Some people don’t see taking pictures in a holy place with a good eye. The answer was a surprising “Yes, you can take as many pictures as you like”. 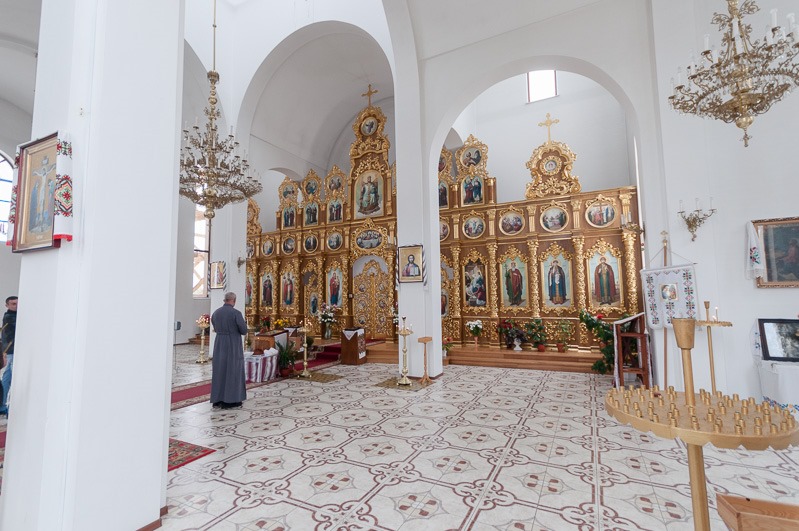 So, this time I got some pictures of the Iconostases inside. As you may notice, there is no place to sit in this church. Or any orthodox church in Ukraine for that matter. You’re supposed to stand to receive your blessings. So I had the time to take a few pictures of this inside when we were asked to come with a young girl. At first I didn’t understand what she wanted, but she had been sent by the priest that had allowed us to get in and take pictures. 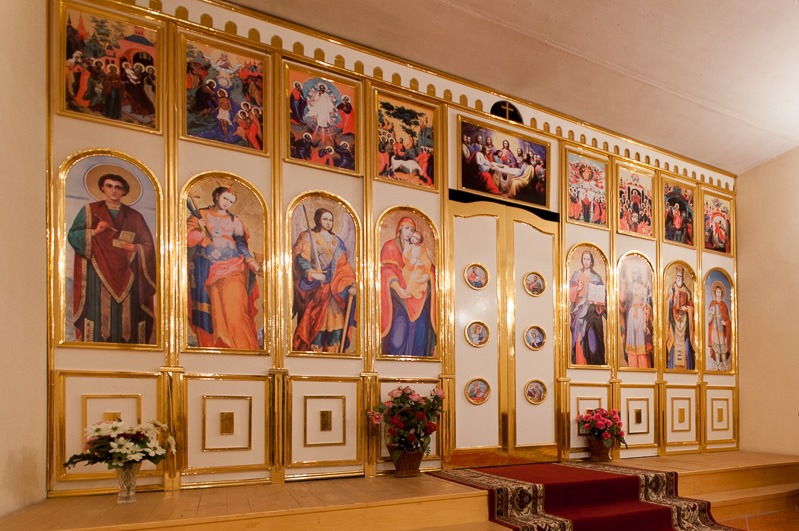 So much for the approval, I thought. But it turned out that there would be a small service at that moment and the presence of a camera was not really appreciated. We were invited to go to a different part of the church, namely the basement. The said basement was still under construction so I started thinking that it might be an idea to turn on my cellphone, just in case (horror movies come to mind

It turned out that we were allowed to shoot the inside of the church for the children. The children just finished their Sunday School and were on their way out. No pictures of them here, though.

A few days later, were were in Kiev, the capital of Ukraine. Kiev is the place where you can find the Pecherskaya Lavra Monastery or the Lavra Cave Monastery. I have already blogged about it here. The weather was not really cooperating and we were mostly in a hurry en route to different places. It was a dense fog that prohibited me from taking the swooping type of picture with all the golden domes and the green surroundings. 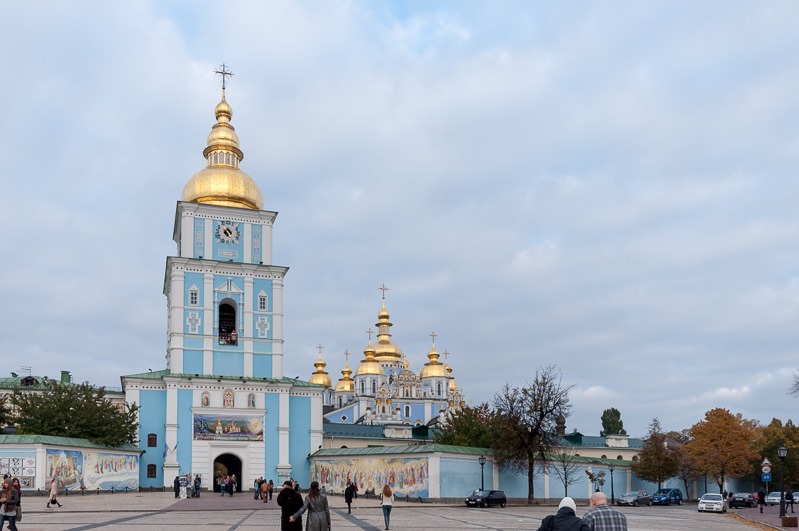 Instead, we went for a walk around the different places like Mikhailovska, pictured above. Mikhailovska Monastery was rebuilt in 2000 after a 70 year absence during the Soviet era. The Soviets destroyed the buildings and constructed huge government buildings on most of the territory. Just to make sure the monastery would not come back. They were wrong. After the fall of the Soviet Union, voices went up to reconstruct Mikhailovska, dedicated to the guardian angel of Kiev, Mikhail. In 2000 the buildings were completed and once again ready for service(s). 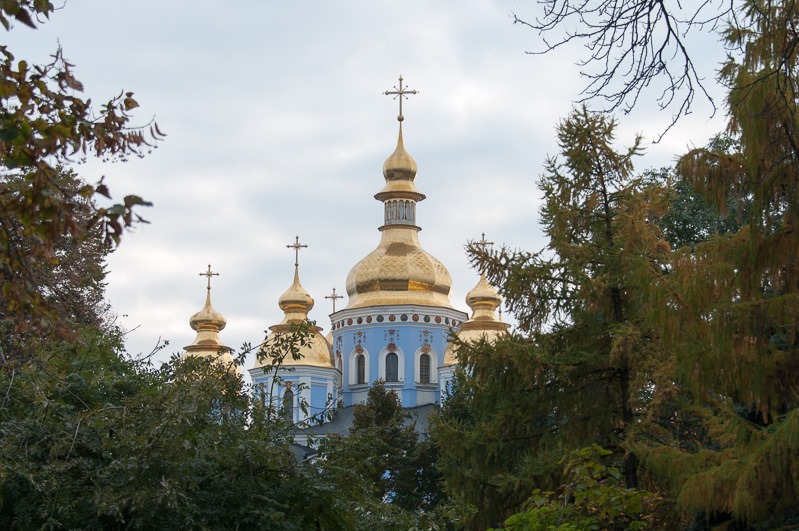 Walking around the back of Mikhailovska you can find those picturesque shots like the one above. I had to creep in pretty close to avoid having to photoshop out all kinds of power and telephone lines…

Mikhailovska is situated pretty high above the river Dnipro (or Dniepr). Therefore a walk to the water was something I really wanted. Arriving at the water, there was a LOT of construction going on. Even an “ancient” MacDonald’s restaurant is going to be destroyed and buried under meters of earth. I am curious about the result of that construction site. 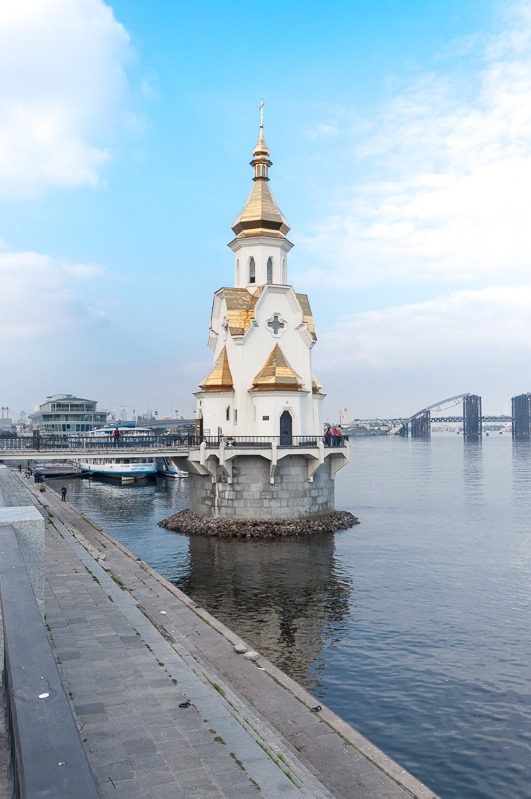 Chapel of St Nicholas on the Water

Arriving on the river banks, a small church is situated on the water. St Nicholas on the Water is dedicated to all sea- and river faring people. A service was going on inside, so I couldn’t take any pictures without attracting attention. The inside is probably 200 square feet, if not less. 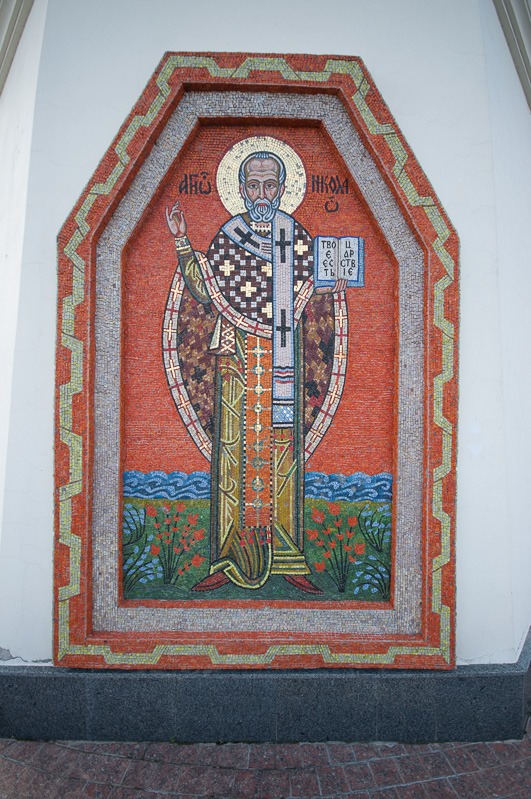 St Nicholas Himself on the Water

The side facing the water has a nice mosaic on it, portraying St Nicholas himself. On the water, of course.

Just to show that visiting churches with golden domes is not all you can do in Eastern European cities. If you are close to them, make sure you look around, there is lots more to see than meets the eye. Unfortunately, this time I didn’t have enough time to go and ask about the history of different buildings and churches. Although many of them look old, they may be from a very recent time. Like Mikhailovska, that was rebuilt only as late as 2000.