Going to the market

Shopping is always fun. Well, at least if it is not endless trying and rejecting shoes, clothes etc, that is. One can learn or understand a lot of a country by going to its markets. In the north of Holland in the city of Leeuwarden there is a market every week on Friday. The space taken by it is free on the other days of the week. Over the years, the weekly market has been moved around from time to time to make place for construction or other festivities. 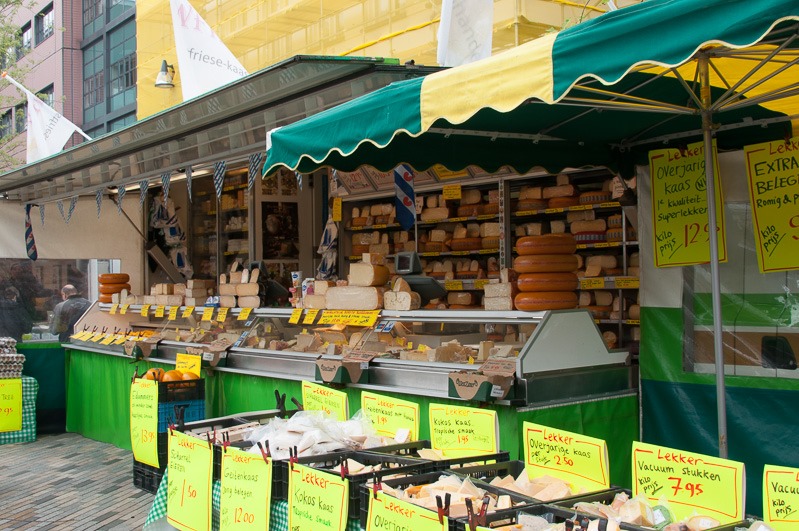 This time I was in Leeuwarden and the market is back to where it was when I grew up. The cheese stand decorated with its pricing and presentation of all the different cheeses on sale. In the stand on the street, the pieces of cheese are vacuum sealed against weather and fingers.

Of course this was not the only stand on the market, not even close. But other cheese stands are there too, all presenting different cheeses with different prices. If you ask, you can taste every cheese if you want. 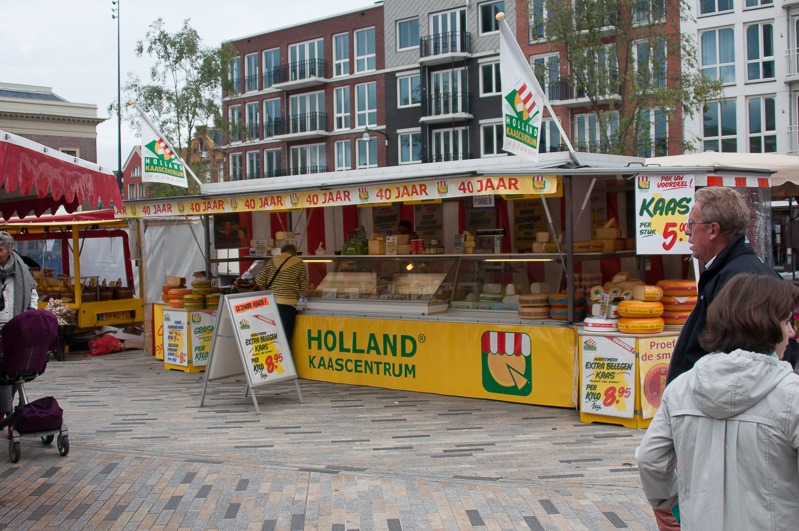 Please note that the prices shown are in Euros, not Dollars 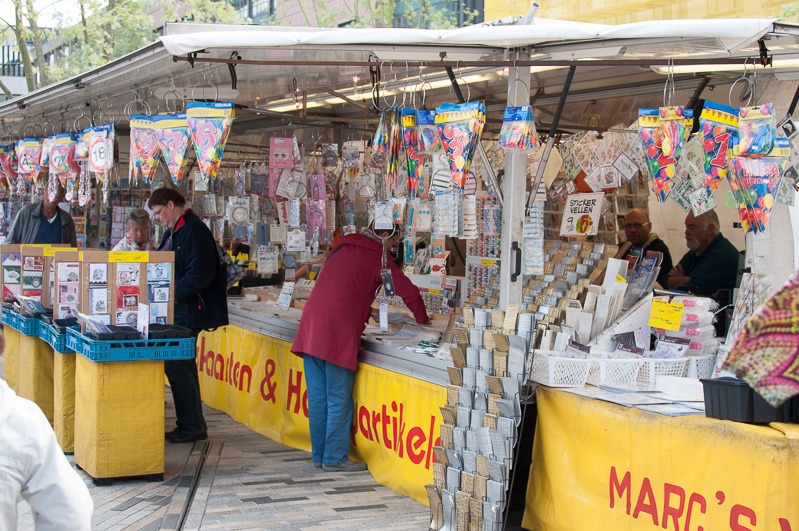 Other stands allow you to touch and choose whatever you like, under only one condition: You break it, you pay for it. Seems normal to me. What comes to mind is that all the stands have a predefined spot and have their licenses displayed somewhere on the stand. All in all a very pleasurable experience. Only the flower seller was not there, I guess he hasn’t been there for a few years already, though. You could not stand in front of his flower truck and get away without buying any flowers or plants… A real pleasure to see that guy work!

A little later we went to Ukraine. Again to the market since that is the best place to get your daily fruits and veggies. As well as much of the rest of your household needs. 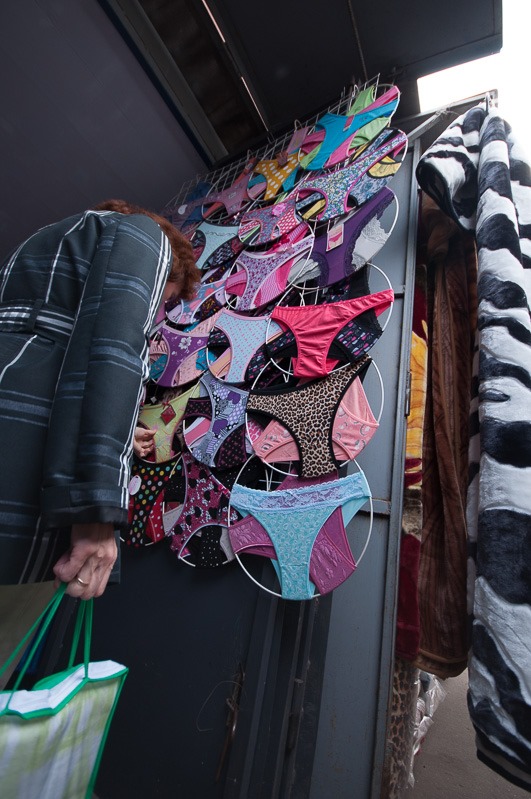 You may notice the odd angle at which the shots are taken. I noticed that many salespeople on these markets do not see a big camera with a good feeling. At several occasions I was asked why I was taking pictures of their stands. It seems that the “authorities” also come along with big cameras and that usually spells trouble for the subjects. 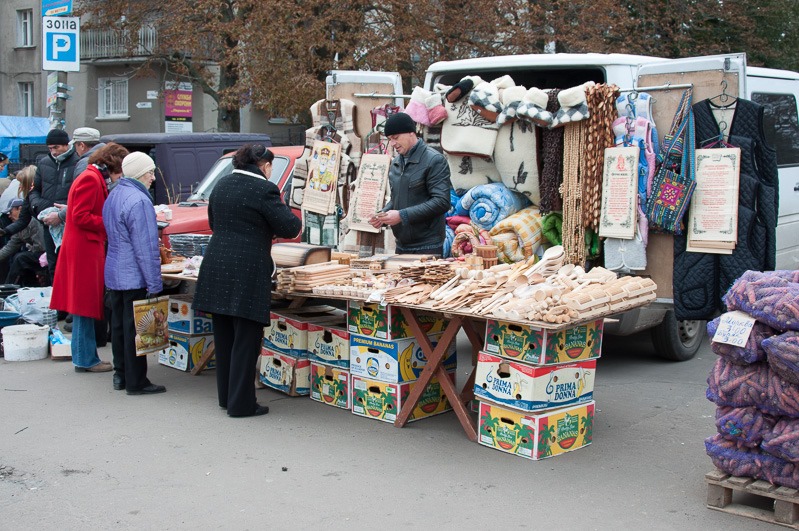 Wooden artefacts, religious and not

So I reverted to a much smaller and much more inconspicuous camera: my cellphone. From far away, the DSLR was good enough, but no work was possible closer up. 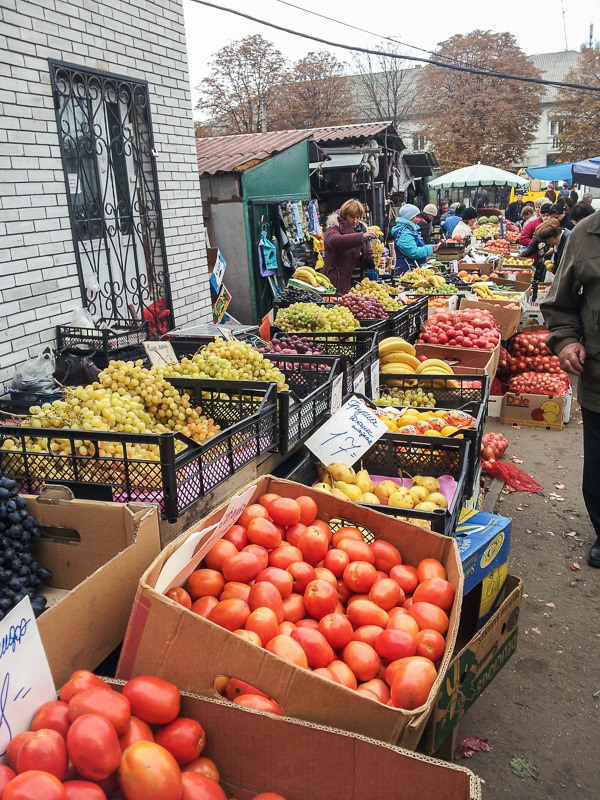 Fruits and vegetables are presented in the simplest way possible, in their own cardboard boxes. Here and there you can find the pricing on the wares, but most of the time it is necessary to ask. In which case different people can get different prices. With my accent in Russian I will be in for quite a bit more money than the residents of the city. Even people from other cities may get different prices. 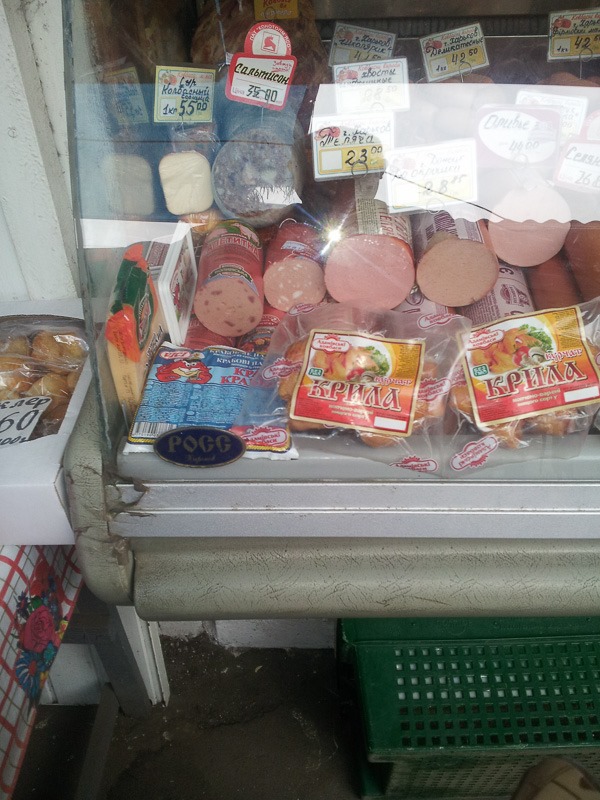 That is not to say that everyone is dishonest on a Ukrainian market, far from it. But in some cases it can be easy to get a little more money from a client based on his accent. While here in Winnipeg I was told that my Russian had a distinct Ukrainian accent, in Ukraine my Russian sounds more like a Spanish cow and is easily identified as “foreigner”. And foreigner rhymes with “rich”. Nothing ventured, nothing gained. 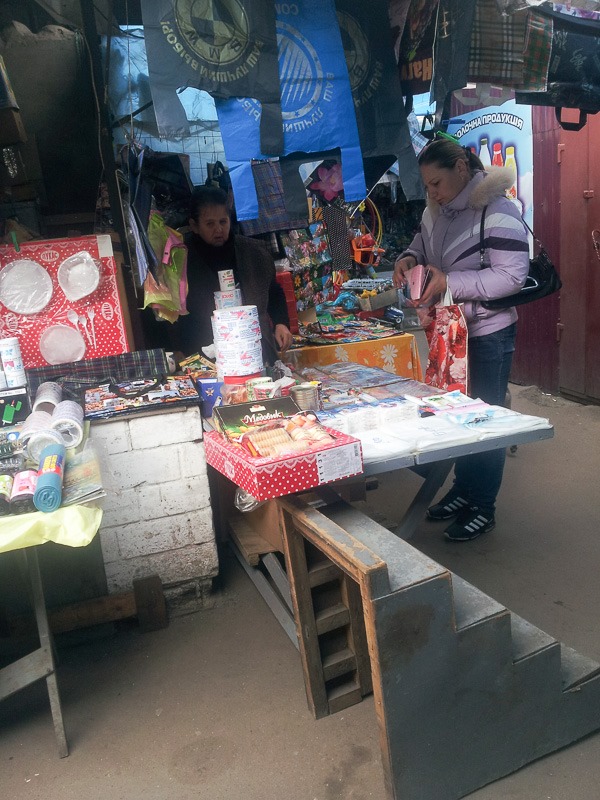 You can get mostly anything on the markets in Ukraine, but you have to look for it. And ask for the prices. Many times, things are mixed together. Not to go as far as mixing hardware with tomatoes, but that’s not far off. 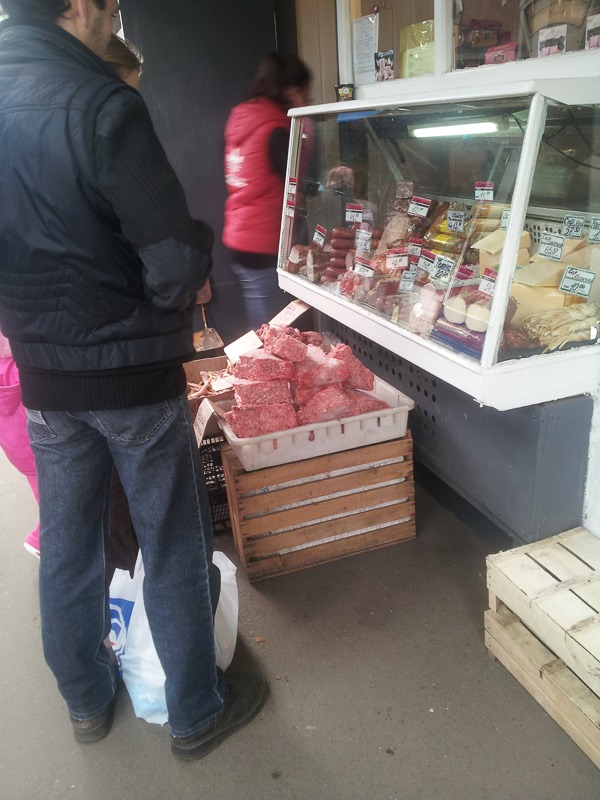 Also, freezing products is considered good against any type of contamination, so the ground meat you see in the above picture is frozen. But not packed. If you want some of it, you pick up a chunk and the salesperson will weigh it and tell you your price. If you don’t like the chunk you just picked up, then you put it back. You have to keep in mind that meat and meat products are always to be cooked thoroughly, never to be eaten as bought. 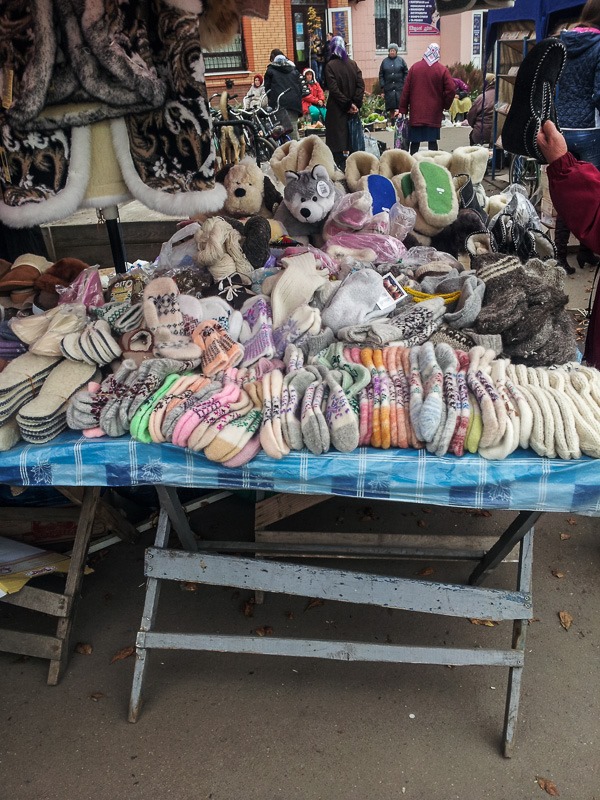 Warm stuff for the winter

Stands with warm stuff for the winter start to show up by October. Part of it comes from Turkey, part from China. You may also find stuff made in Ukraine, if you’re lucky. Homemade stuff doesn’t sell here. 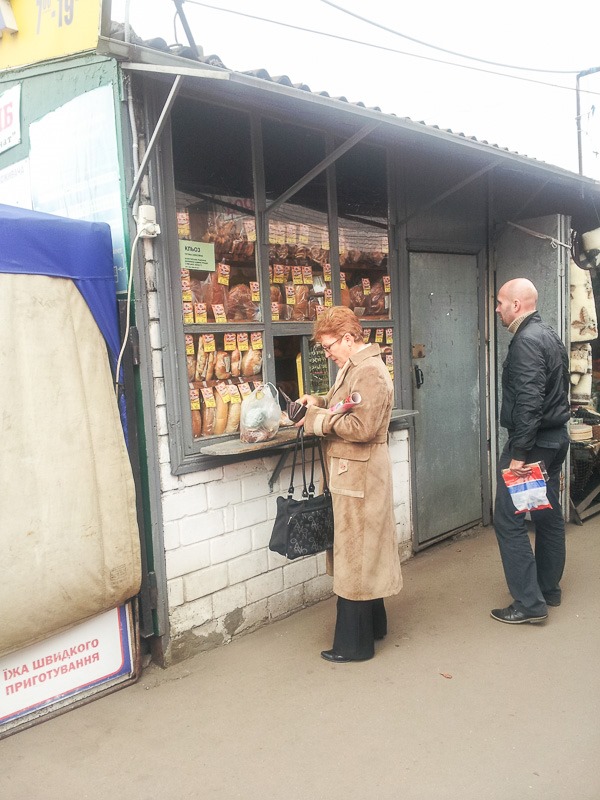 On the other side of the path of the warm socks was the bread stand. This was a more permanent structure made of stone. While some vendors show their products in the open, none of that is ever true for the bread vendors. I have always seen them serve their bread through tiny windows. The result is often long lines in front of the bread stands. A picture of one of those lines once ended up in my local (Dutch) newspaper. The article that went with it started ranting about the 1930’s when Ukraine was being starved to death by the then almighty powers. Going on by saying that the people of Ukraine feared the same thing today and stood in line for their bread. None of that was true, Ukrainians always stand in line for their bread from the market. As with many people that have gone through hard times, though, they also don’t like to throw away any food. 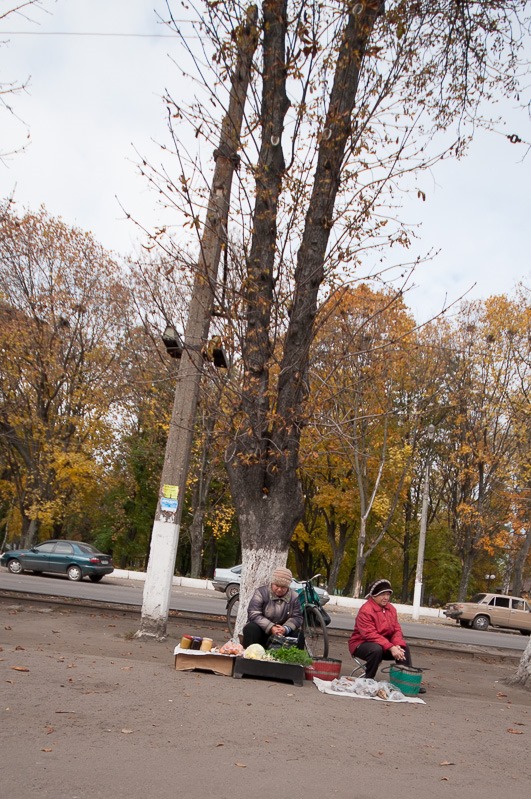 Wild sales on the street

And then you have the persistent but now mostly “alternative” market of home products. Home made food, home baked goods and self harvested mushrooms from a non-disclosed location. Here again, a little discretion as to taking a picture. Often enough this is the only way to supplement a meagre, if not non-existent pension for the old folks. Happily the D90 doesn’t make too much noise when clicking the shutter.

As you can see, from the well organised markets in Holland to the rougher markets in Ukraine to the wild sales on the streets, different countries have different markets. You can judge for yourself which kind of market you prefer. Don’t be too hasty with that judgement, though.