Days are light and nights are dark. That’s what I was taught in preschool. I guess that was more for the words “light” and “dark” than for teaching me what night was. However, here in Canada, the dark nights can be surprisingly light. And I am not talking of nights on the North Pole. 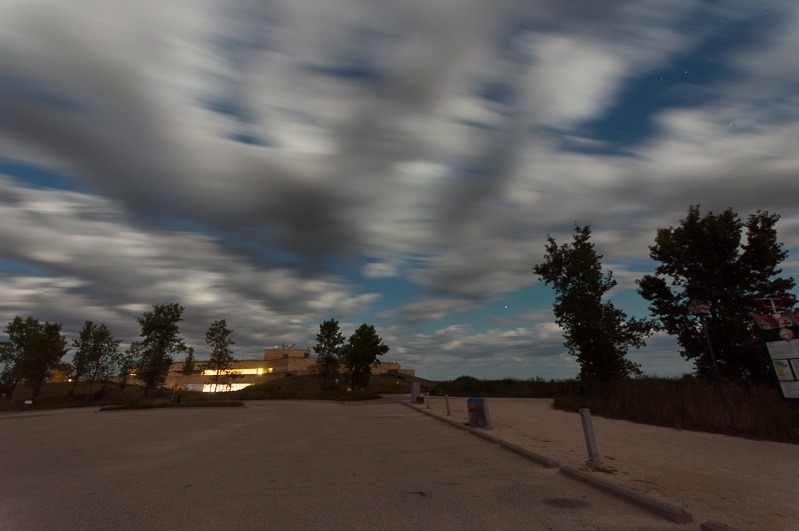 A few weeks ago I went out to shoot some elusive aurora. Right from the start it was clear that the aurora was there. But Mother Nature had other plans for the night.

The forecast showed that more clouds were to be expected in the next two hours before it would clear up a bit. With the emphasis on “a bit”. So I decided to go a little further up north, where the cloud cover was not so dense. When the moon made its first appearance, I just had to get a shot of it. Ok, every photographer has a couple of moon shots in his or her collection. This one struck me as a very nice contrast with the usually bleak, bluish moon. 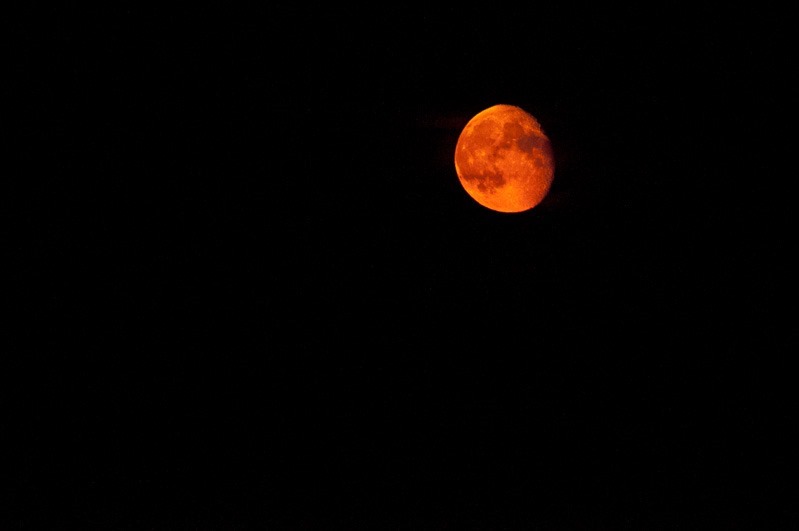 A snapshot of the rising moon. Just when you think that nothing is going to work for the evening, you get the moon to show. I didn’t expect that moon to become very bright that night. I was wrong.

I ended up in Matlock, a small town full of “cabins”, small houses with “limited” amenities designed for summer use only. You’ll have to take that with a grain of salt, though. There are lots of people living there year-round. As for the amenities, everything is there. What didn’t exist right out of the box, was added over the years. As a result the “cabins” are now full-fledged houses with only their size limited by law. 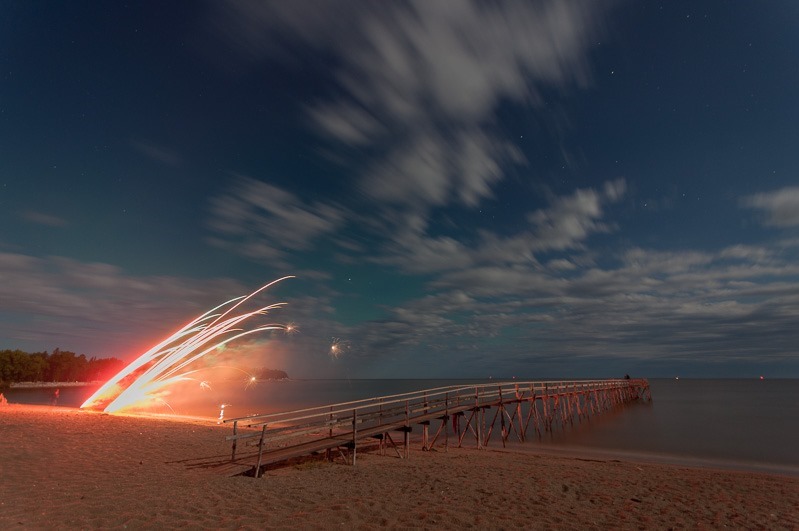 Arrived in Matlock, I went to the beach. By chance a few youngsters were setting off fireworks, just as I finished setting up my camera. The pier in Matlock is a well-known subject in many photographs of Manitoba. But I didn’t go there to capture fireworks, even if that was a nice little bonus. 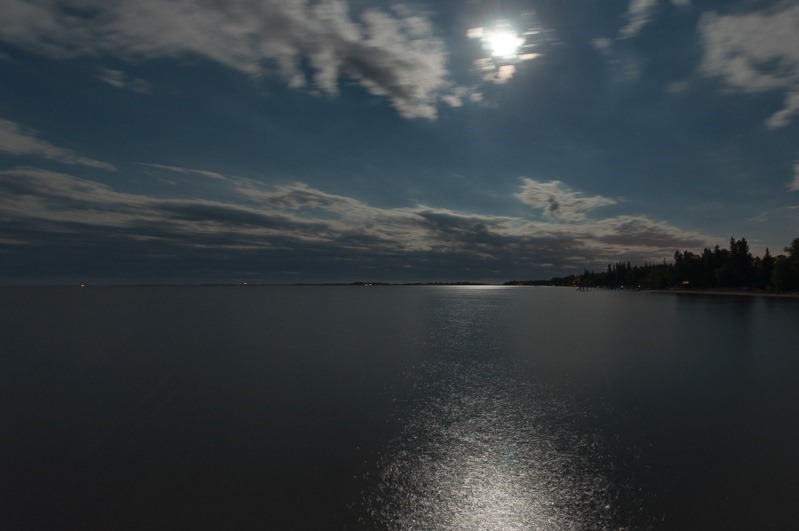 As you can see, the beach was pretty well lit. Not by those fireworks, but by the nearly full moon. A moon bright enough to overexpose in a matter of seconds. A shot from the end of the pier yielded the above picture. Not a big picture in itself, just to show how bright that moonlight was. 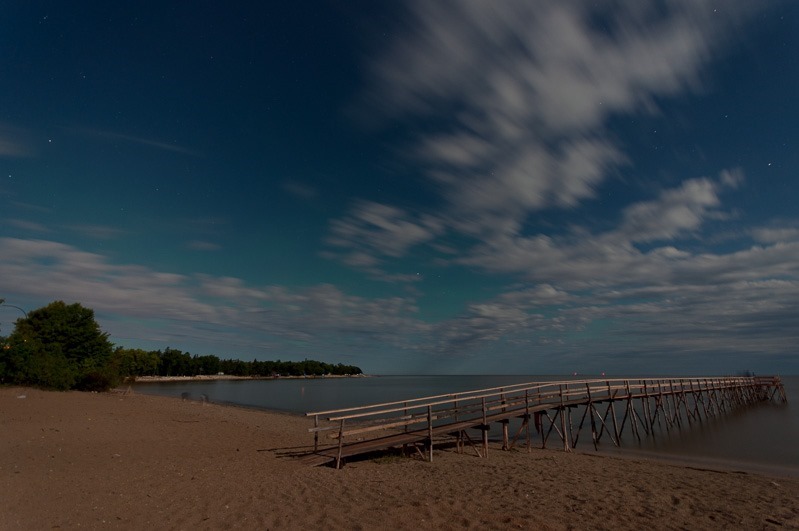 Back to the beach, setting up a tripod on a rickety wooden structure cannot be called stable. And stable is just what you are looking for when using a tripod, right?
I thought I spotted a hint of green, when I got back to the beach. Not an easy thing to see when the rest of the light is so bright. 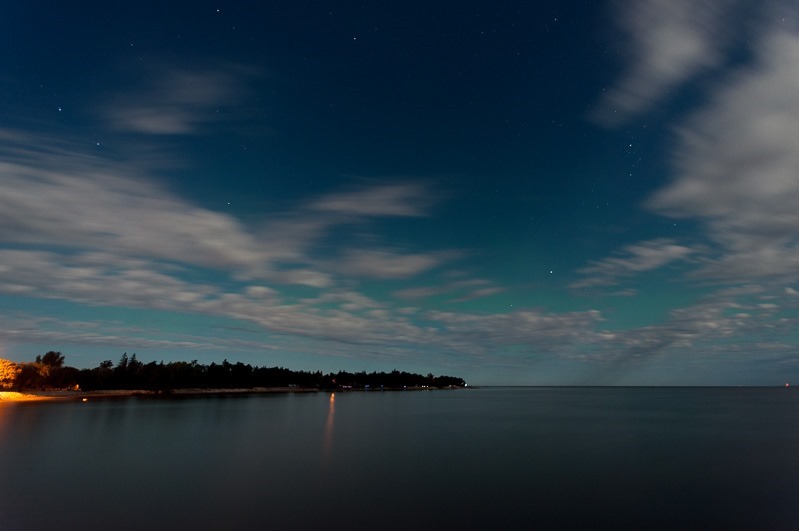 Once I moved the pier out of the frame, the sky showed that there was in fact a little bit of green there, as well as a lot of clouds. So I decided to stay a while to watch the development of the situation. 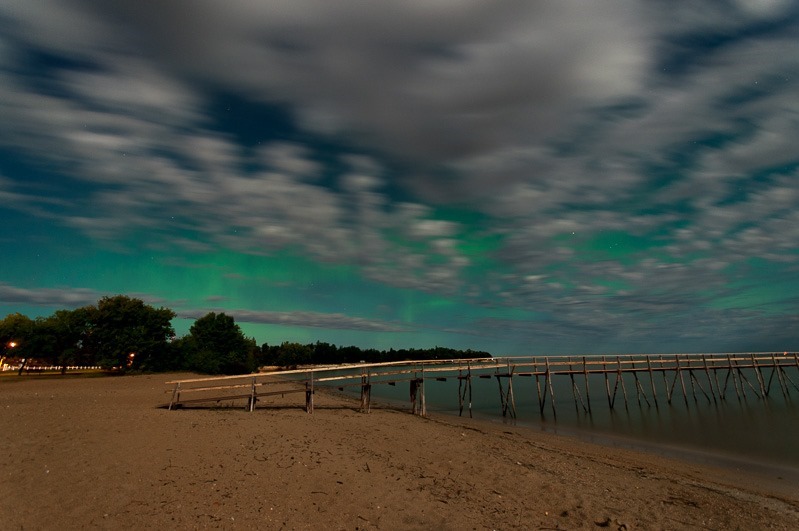 Start of the show 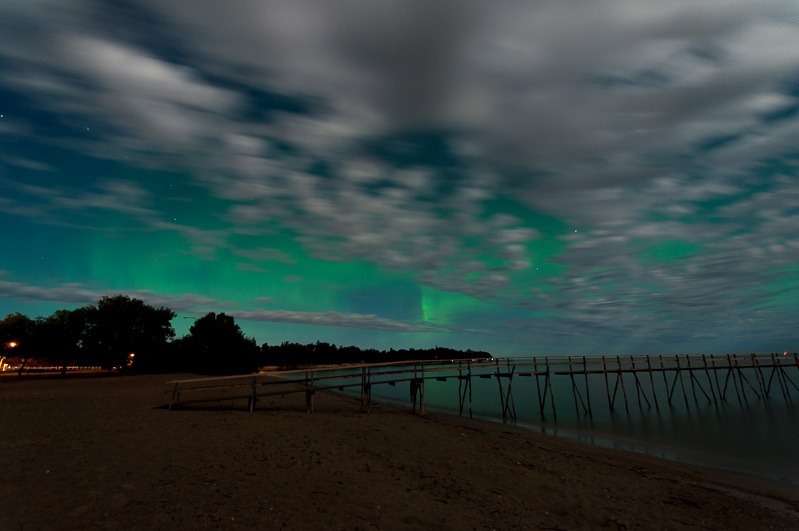 Once the moon hid behind some of those clouds the view was better for the aurora. But as you could expect, that view was only temporary. The aurora wore down and the moonlight came back. It was time to shoot some longer exposures to show the movement in the clouds. 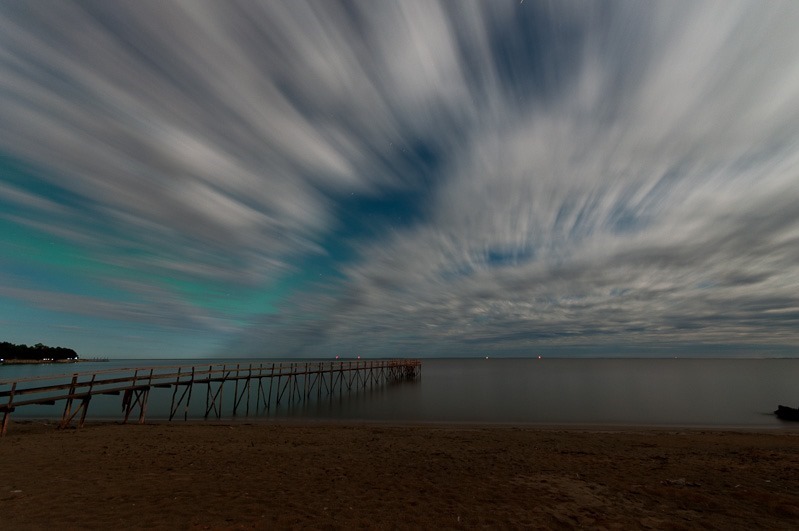 Finally, the last picture became my favourite of the evening. It has everything: moonlight, starlight, aurorae, lighthouses, yard lights, you name it, all of it shows up to light up the frame, keeping the aurora visible at the same time.

So, for a night where there was no forecast of aurora, the results were pretty impressive. I think I should go out more during the nights, for as long as there is a mix of lighting.