That time of the year again

It’s that time again. Waking up in the morning, thinking that something is wrong. Everything is too quiet outside, you hear no cars, trucks or other noisy engines. What is going on? Is it too early to wake up? You look at the alarm clock. Nope, not too early, more a bit later than your usual wakeup tine. 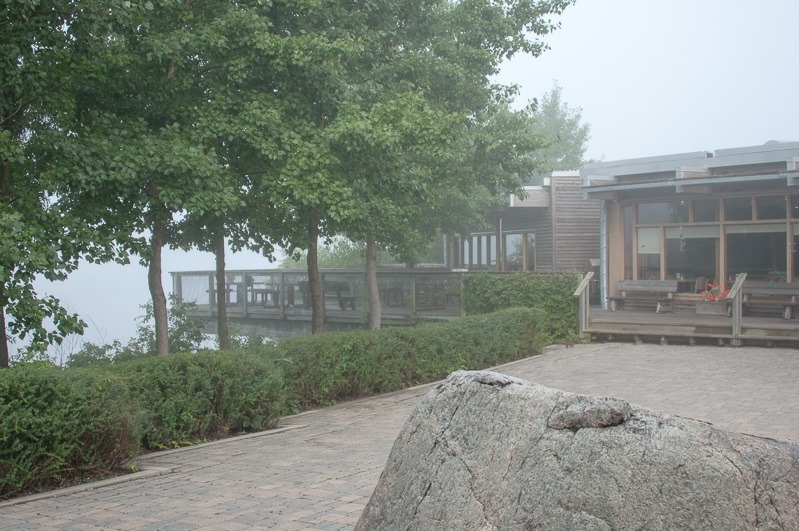 You peek through the window, seeing nothing. Now this starts to be uncomfortable. You run to the living room that had a bigger window and see…

Everything is shrouded in a greyish blanket. Nothing much to see except for the sun trying to poke through those grey blankets. It’s fog time! With it also comes the realization that this may signal the end of summer as well. Now that you established what is going on, it is time to get your gear and get out and shoot. All before the sun burns away the dreamy effect of the fog. 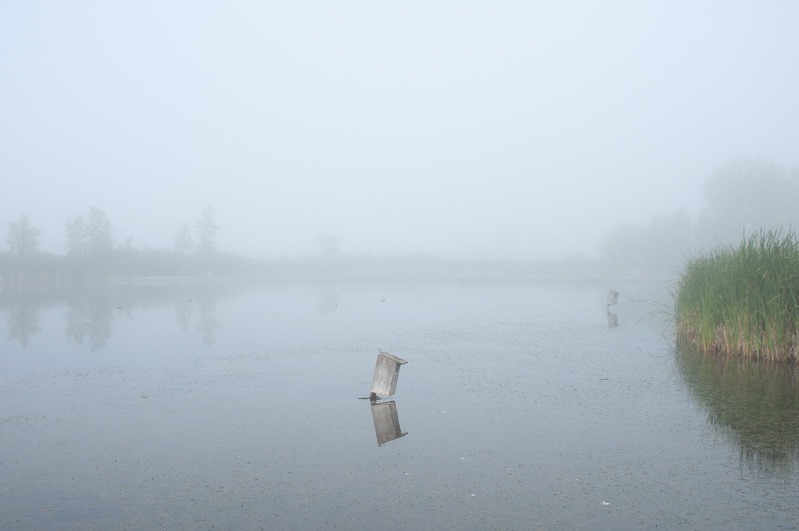 My choice was to go to Fort Whyte Alive, even if it was before opening hours. A first look at one of the lakes shows that birds and insects have not emerged yet. All is quiet. By that time the sun was gaining strength and the fog started to thin a little. 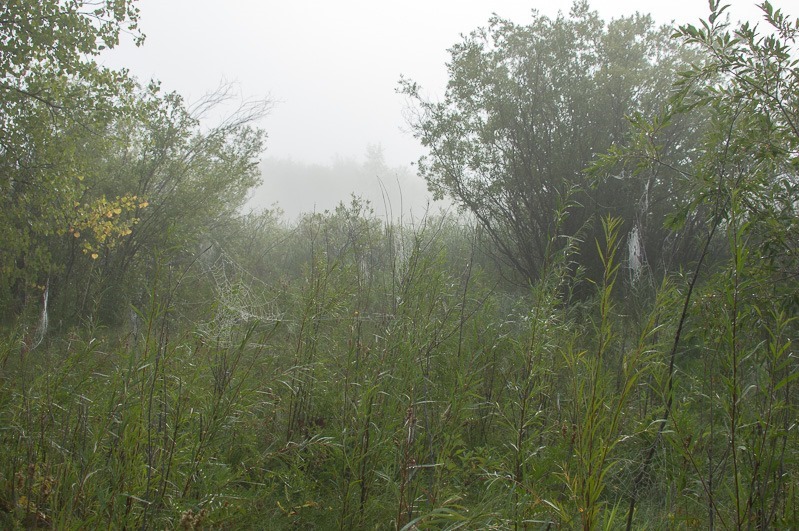 A virtual minefield for insects

Looking all around me, I saw that even if we don’t like certain (biting) insects, their life is far from danger-less. Now that the fog and dew had made the spider webs visible, you can see what an insect risks by simply flying through this little patch in the woods. Not that I am going to pity them now… 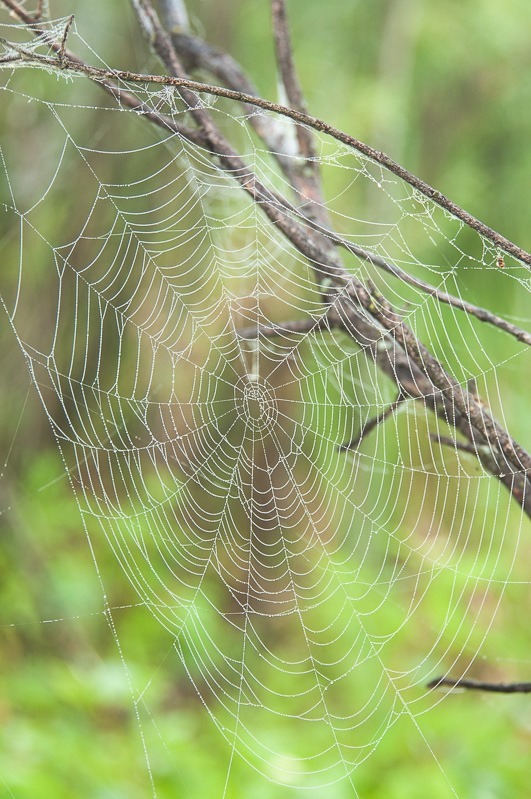 Spider webs, perfectly visible, that’s not often you come across them. So I was shooting them like a madman. Then I realised that all of them more or less looked the same, doh 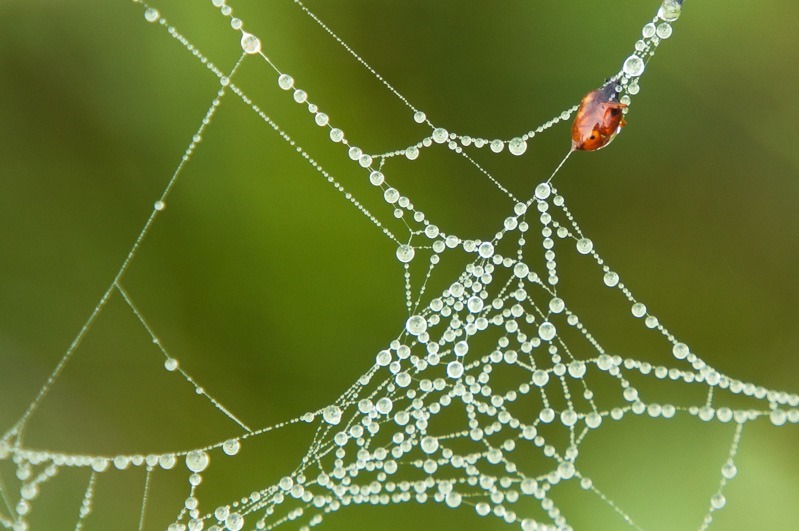 On to the next challenge of the morning. Spider webs, ok, but dew does more than make them visible. It can also trap the owner of the web. I don’t know if spiders are water resistant or if they even can survive in a bubble like this. I didn’t try to find out. Its outer skin will be hydrated, that’s for sure… 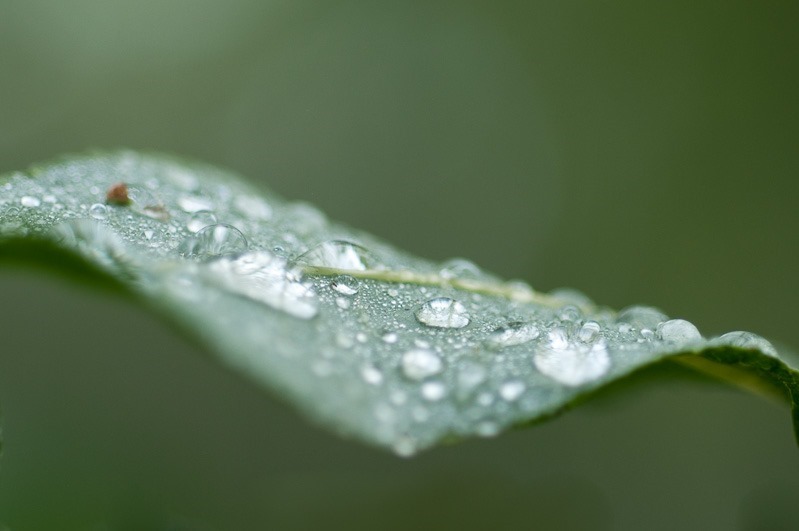 By then, the sun had gotten strong enough to have burned away most of the fog and all there was left was the dew. At least for a few minutes. Small drops of water, lying on water resistant leaves. Some plants soak up all water that falls on the leaves, others reject it. In that case it gives for some nice pictures. 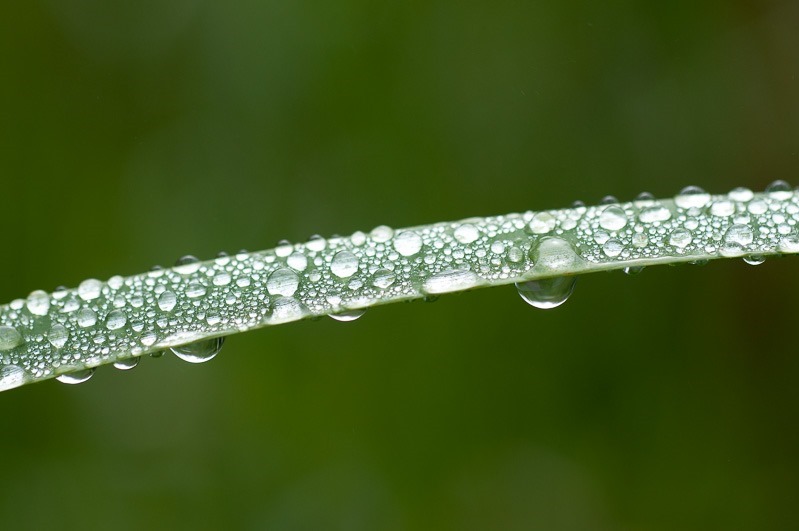 Reeds also close their pores against too much water. The advantage photography-wise is that the water drops cling to the leaves anyway and form tiny lenses with a view on the background. 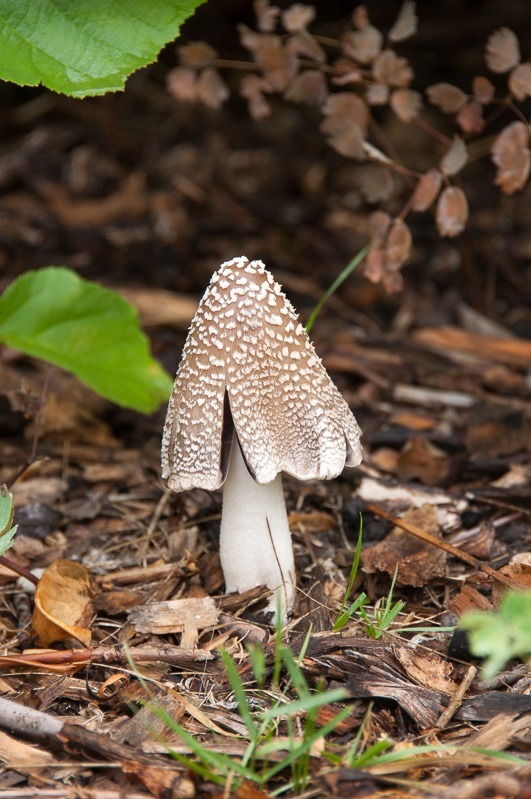 Then, just as sudden as I had woken up, the fog was gone, the sun was shining and… mushrooms popped out of the ground. Not often do I come across undamaged mushrooms, most of the time someone kicked them around or in some cases started eating them. This one seemed pretty young, an overnighter probably. Nobody had found it yet.

And so, a morning that started off in a foggy way still had lots of photographic surprises. It’s that time of the year where anything can happen early in the morning. Now if only the summer could stick around a bit longer.