It comes and goes by waves, it seems. For long periods I do no night shooting, sometimes hardly getting out after supper. Then there are periods of nightly activity, laced with Red Bull and coffee. Those night owl times can be very productive.

Sometimes they are a bust. When the sun sets, things start to happen. That’s what I always thought when I was younger. It is still true today, although I seem to be less interested in those “things”. Nowadays, when I go out, it is to record the night and it’s beauty.

Although there are lots of nights where one can go out, I only go out when there is a reason for it. I do not favour wandering about doing nothing and losing my sleep to get that nothing in return. Nights might be cool and quiet, true. Getting enough energy for the coming day is more important than quietness alone. Getting some great pictures on the other hand, is worth staying up any night. 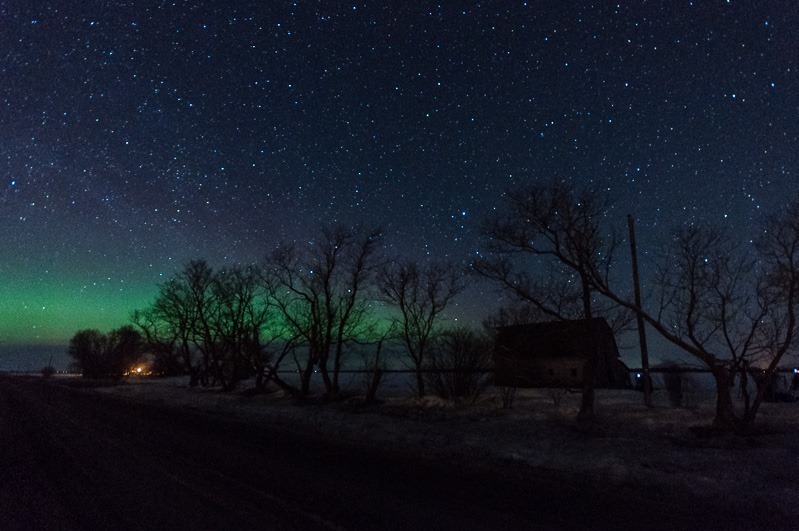 When I first moved to Canada, I had no idea that Northern Lights were easily visible from the latitudes of Brussels, Belgium. Winnipeg is on the same latitude as Brussels; I have lived way more up north than that, but had never experienced the Aurora Borealis in Holland. It is a beautiful thing to see, on a dark, clear night. Except lately there have been very little of those dark, cloudless nights. It seems that whenever the sun starts spewing material towards earth, clouds are there to prevent us from seeing the show. 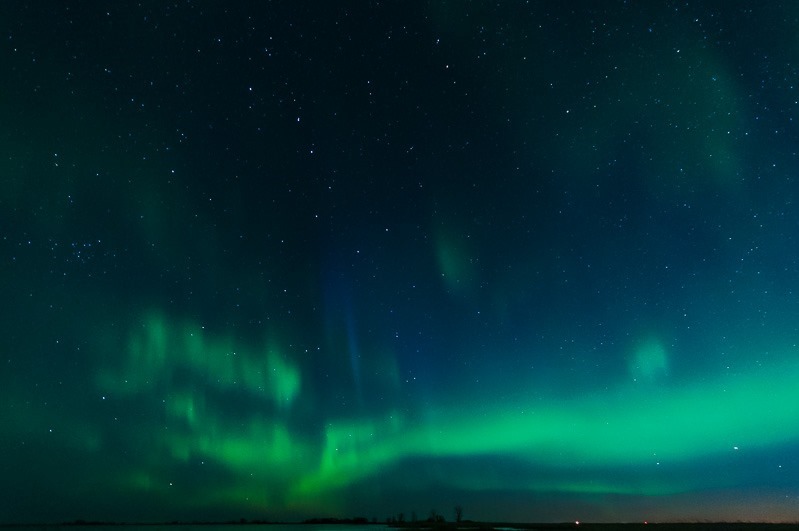 But there is no use in complaining about the weather, it won’t change for that. When the night IS clear though, the show can be spectacular. Green and sometimes blue and purple light up the night sky sometimes bright enough to read a newspaper by. 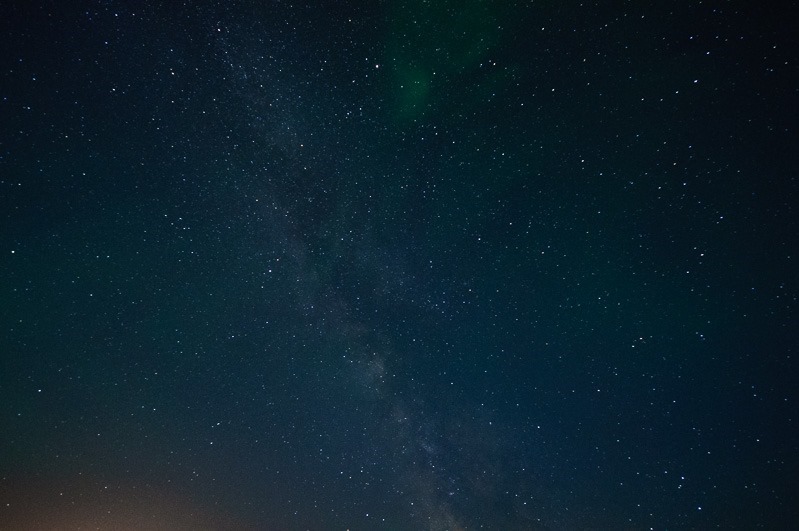 Other nights, while forecast to be very aurora active, remain empty and dark.

And that brings me to the next type of outdoor night photography: Stars.

In Holland, and most of the rest of Europe, the skies are way too bright to ever see the Milky Way. Light pollution of cities and villages everywhere prevents you from seeing the darker parts of the sky. 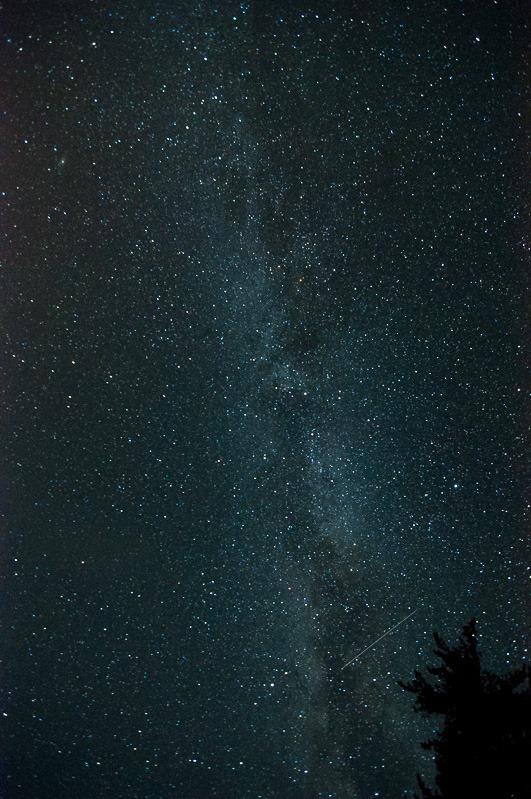 Here in Manitoba, getting away from Winnipeg and other “light polluters” is pretty easy, if you have transport. A few weeks ago, for the Perseid Meteor shower of August 11 to 13, we went to a small place called Rennie, near the Whiteshell Provincial Park in Manitoba. Some 120km away from Winnipeg, and far enough away to not see any human made light in the sky. 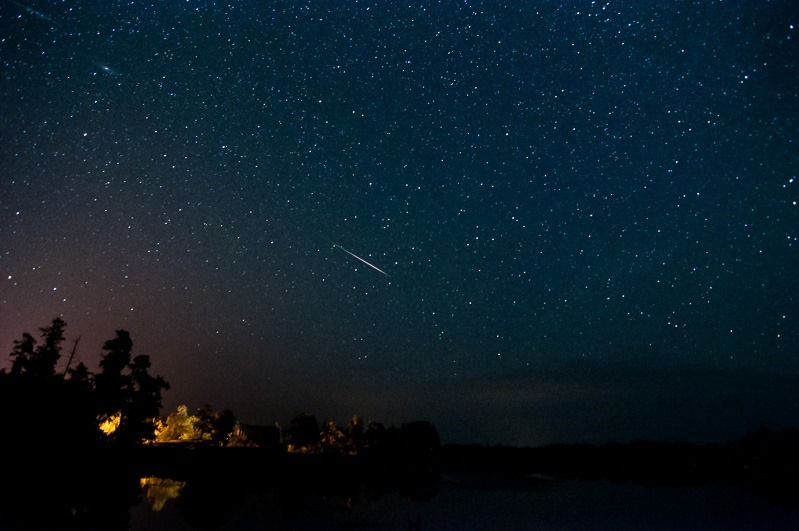 Of course we were looking for the meteors, not so much JUST for the stars. The meteor activity was predicted to be high, but turned out to be lower than average. We saw a small number of meteors burning up in the sky, but as luck wants it, the cameras were mostly turned the other way, shooting other parts of the sky. 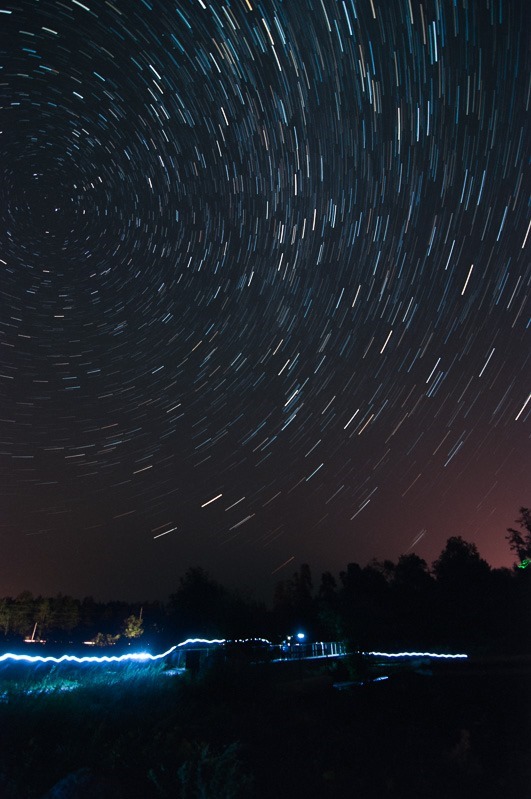 A meteor strike can happen at any moment and anywhere in the sky. However, cameras are not sensitive enough to be able to take a handheld picture on the spot. They need to be on a tripod, with the shutter opened for an average of 30 seconds per picture. No handheld picture taking here. So, with the camera safely set on that tripod, there is only one thing to do. Make it take picture after picture and hope that some of them are exposing when a strike happens. This results in more misses than hits, as you can imagine. 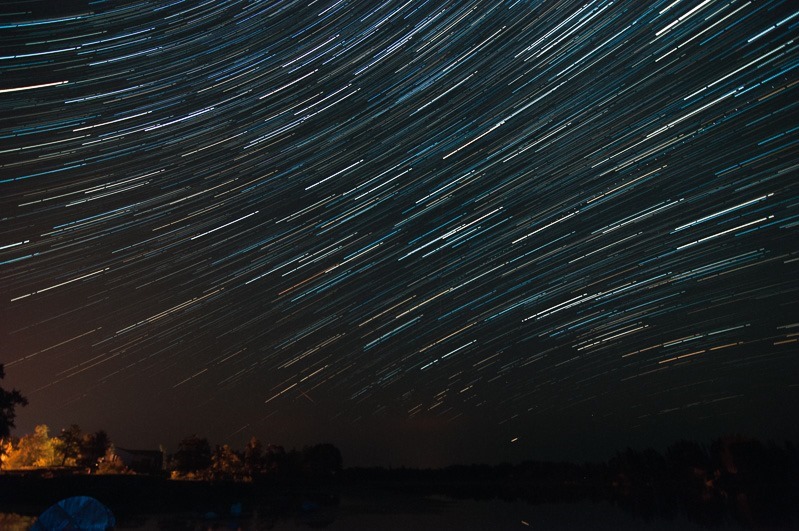 That leaves you with dozens, if not hundreds of “empty” pictures with only stars in them. However, those stars move across the sky and every picture is slightly different from the previous one. If you stack those pictures together using Photoshop for example, you can get star trails, showing the earth’s movement against the sky.

And that is the other activity of the Night Owl: Star trails.

You have to be a night owl on steroids for this, because there is not much activity going on. If you are with other people photographers, then the night can be pleasant, alone you will be bored and perhaps not very safe. Worse with non-photographers who will be bored way before you.

As for safety, the Whiteshell is known to house lots of bears…