Last weekend we were invited in Riding Mountain National Park to learn how to camp. Personally I have seen a few camp grounds in my life, but for others it was the first time.  Driving from Winnipeg at a little before 6am was already something new. I hardly get up at that time. 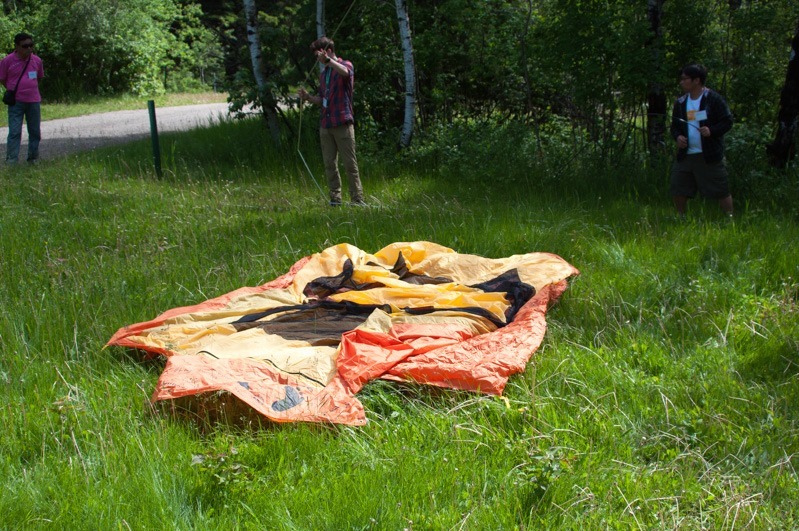 The first thing was to dodge the thunderstorm that was hovering over Neepawa. Once that was done, my thoughts were for the coming two days, probably full of rain and thunder too. Arrived at the camp ground, however, the weather was

perfect. Nice and warm. Once we had unpacked ourselves from the car, it was time for a small breakfast snack and some coffee. Freshly baked muffins on the table were there for the taking. 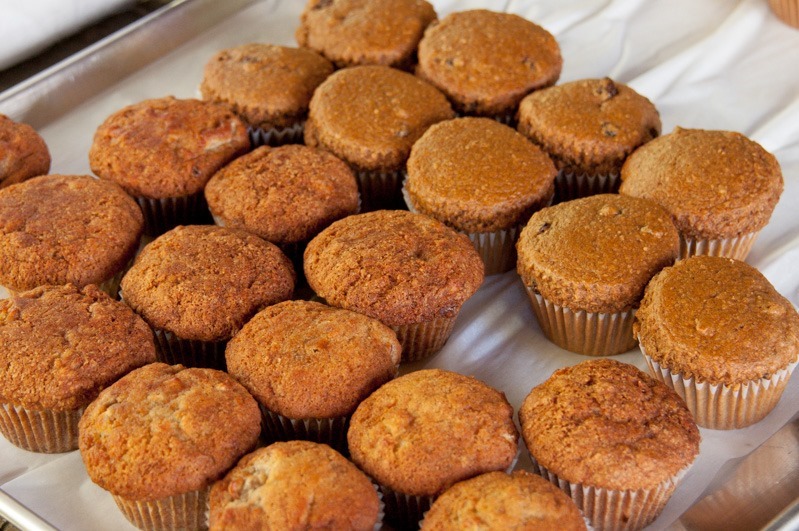 Then, a small walk over the camp ground, a place where I’d never been before. Also, I was curious about how a Canadian camp ground was set up. 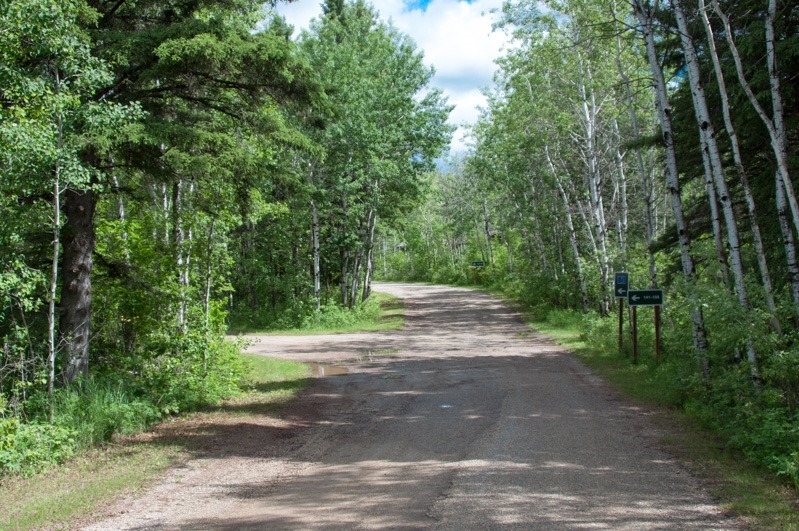 Surprisingly for the time of the year, the place was pretty empty. There were a few campers around, but most of the place was deserted. Fine with me, they announced that there was a black bear roaming on the territory. That was a must for me to see and photograph, of course. 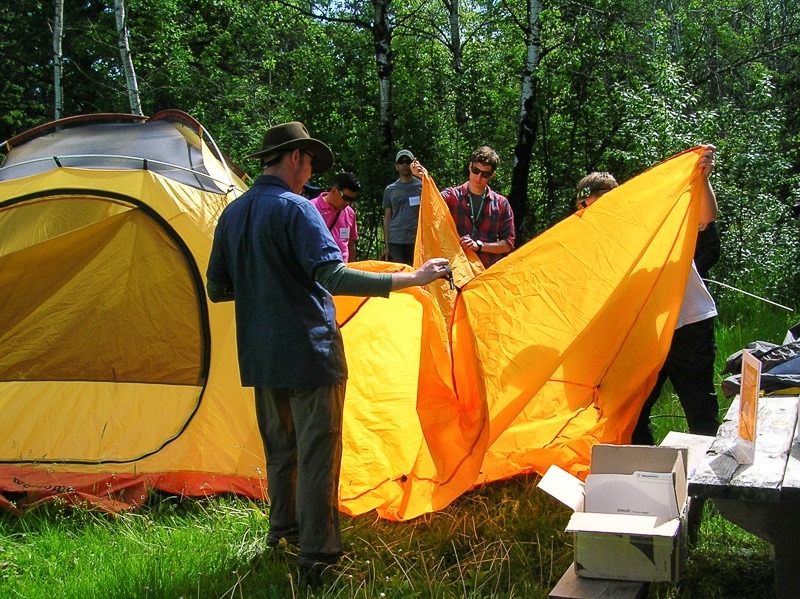 But first, as the title suggests, it was time to learn how to camp. In my younger days I have pitched many a tent, but today those are way easier to set up. At least if you have read the instructions. Or, in this case, if you have seen how it is done by professionals. 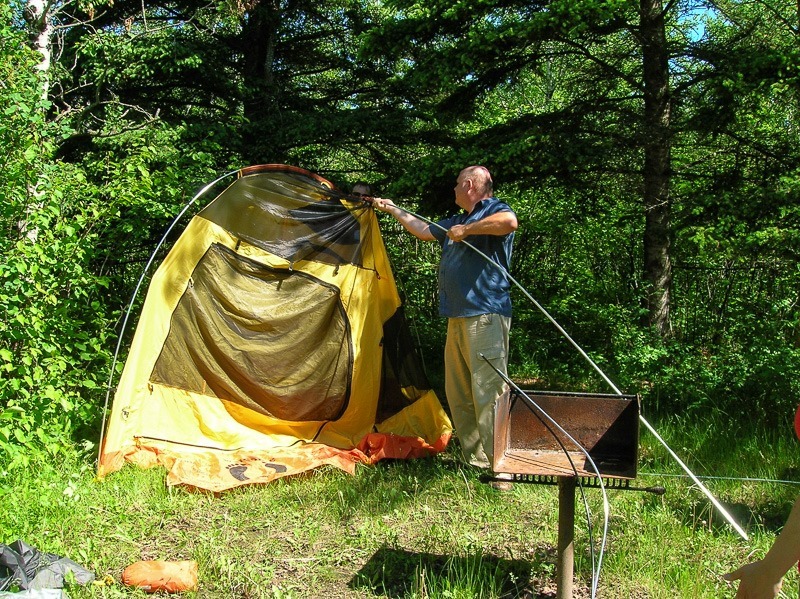 When doing it myself, things got a little bit more complicated. Not much, but just enough to doubt if that tent would remain in position for a whole night. After fixing the problem, the tent was pitched properly and should not leak or even blow away in hard wind. I was advised NOT to fix the storm lines, there was no need for that. A nice attribute in the whole camping area was that each camping spot had its own barbecue. 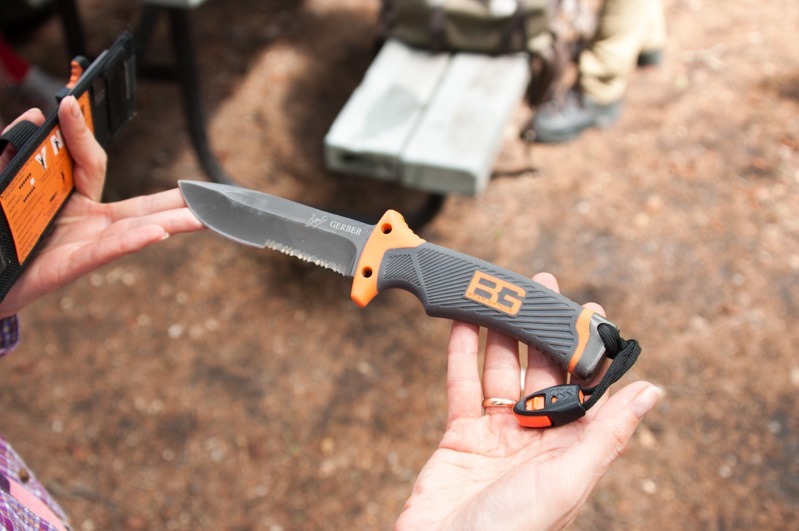 Then it was time for some more instructions on what to take and what to eat and cook while camping. The above knife or survival knife was my wife’s favourite as it is capable of splitting logs and much more. I guess I will get her one, one of these days… 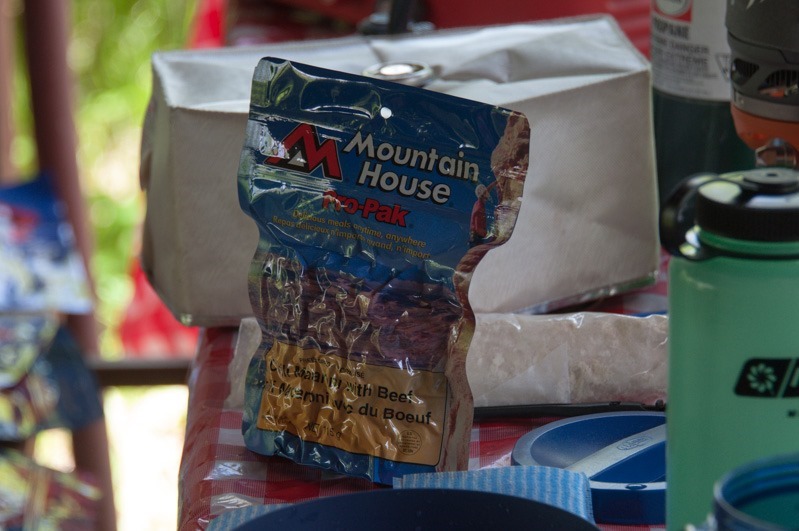 Cooking in the wild is not an easy thing to do if you come unprepared, so off to the demonstrations of dehydrated meals, heaters and even a USB wood fire, a small fire that is capable of recharging your phone through a USB interface. As was said during the presentation, the dehydrated food was a bit on the salty side, but if you come back after a day’s hike, you need that salt. You’ll have been sweating it out all day. 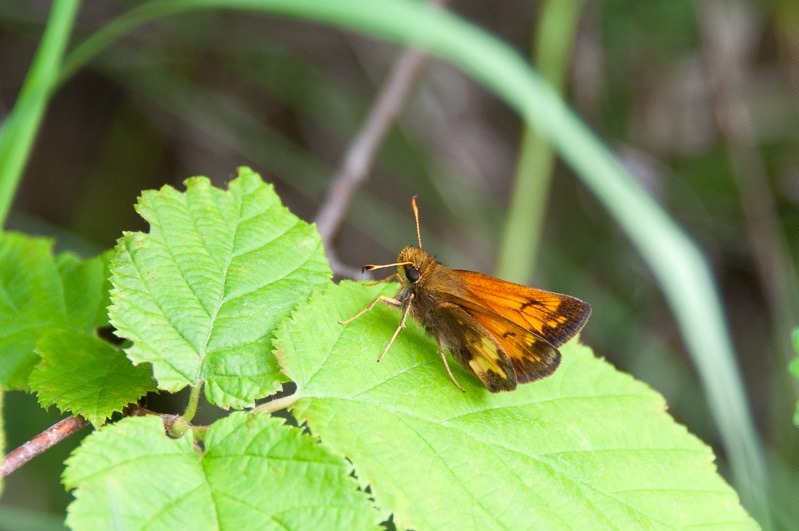 After the presentations, we had a little free time, so off to the wilderness to find some creature to shoot. Surprisingly enough, there was not much wildlife around. I guess is was aware of what was coming… 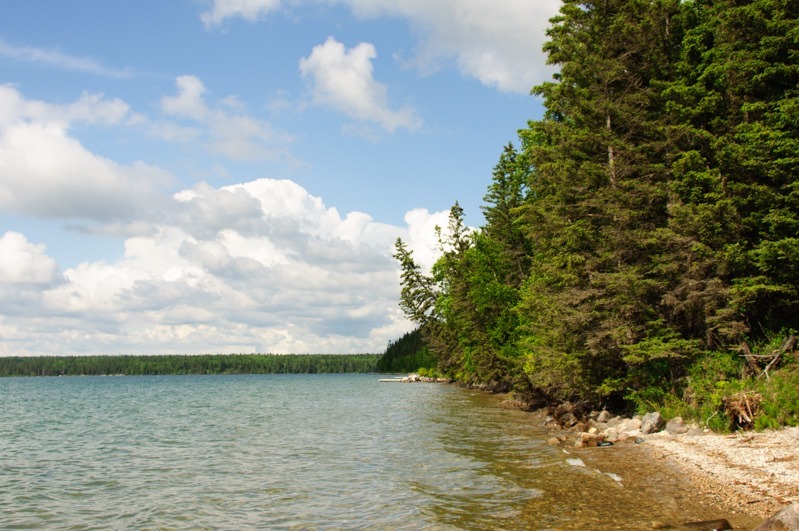 A little walk to the nearby lake called Clear Lake. That lake is clear because it is deep. Well, about a 100 feet deep if I understood well. For a lake, that’s pretty deep. It also means that the water of the lake is cold and thus clear. 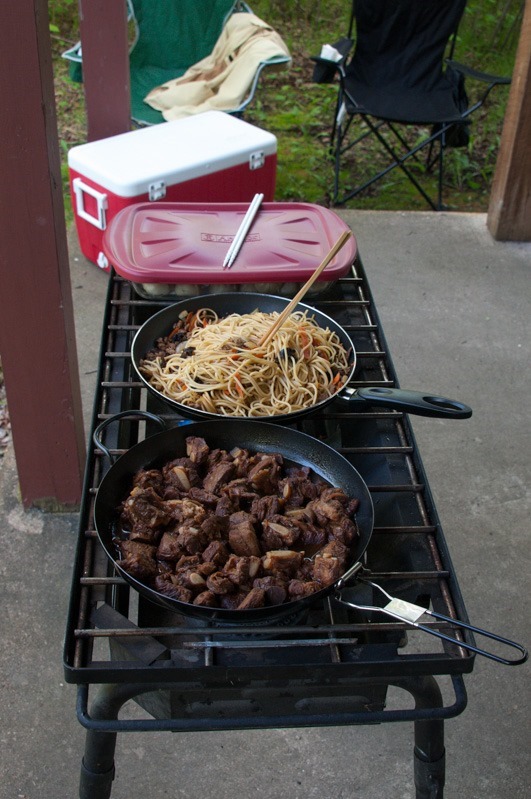 After the small walk to the lake, it was time for dinner. Partly cooked on gas, partly on an old fashioned wood stove. Since this was a potluck type of dinner, food from all over the world was presented, with a majority for Asian foods. 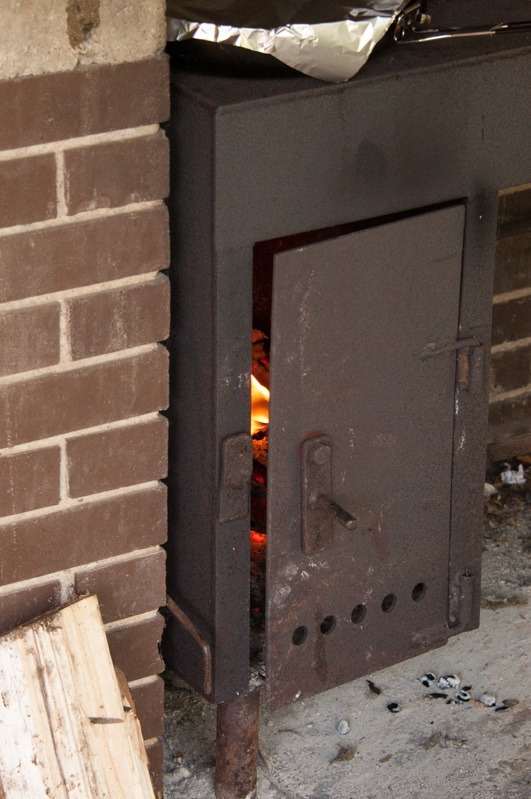 The wood variety of the stove was placed in the center of a shelter, where all people of the group were to get together and eat. The food was great and lots of different dishes were to be sampled. 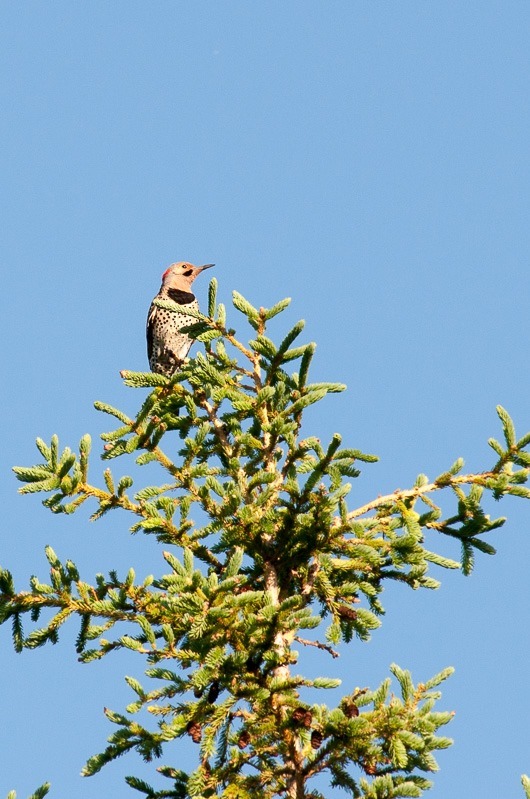 After dinner we had a little free time to clean up and then attend a lecture about bears and their (and our) behaviour to adopt. I just had enough time to catch this Northern Flicker in the top of a tree in front of our tent. You can’t put me beside singing birds and not expect me to take pictures, eh? 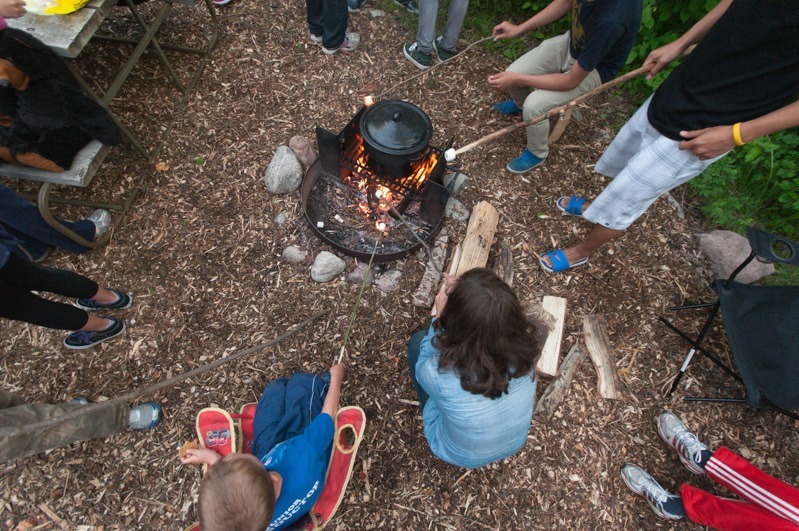 Then it was time to gather around a camp fire and hear about bears. Since one was spotted in the campground that morning I was eager to find them. Apparently the wardens were not so eager to meet the bear and warned us about their behaviour around people. Basically, all you need to do is get away, without turning your back to the bear. Never startle it and you should be ok. No bear-induced casualties have ever been reported in Riding Mountain National Park. 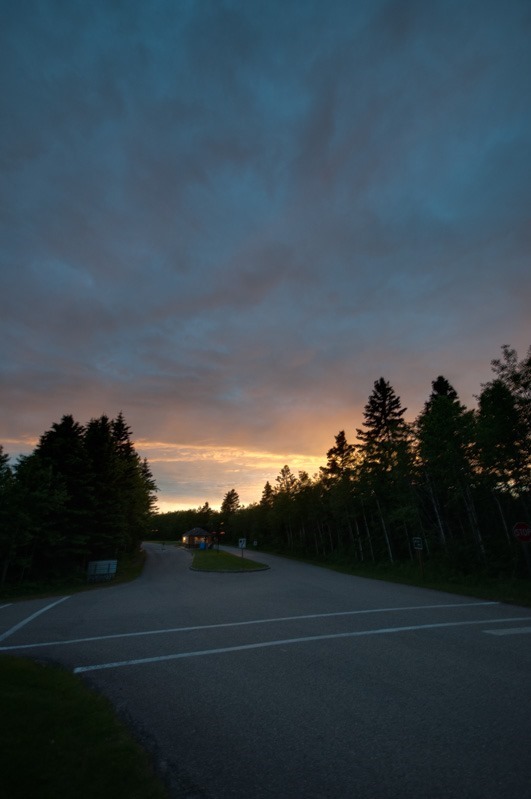 I had the intention of creating two posts for this great weekend organized by Parks Canada, but the sunset should have warned me. During the night, our tent was rocked and half filled with water. I exaggerate a bit here, but those storm lines that I was told not to fix really would have come in handy that night. Heavy thunderstorms for about 4 hours were going back and forth, apparently getting some resistance from another air mass far away. Little sleep and no signs of real photogenic lightning either 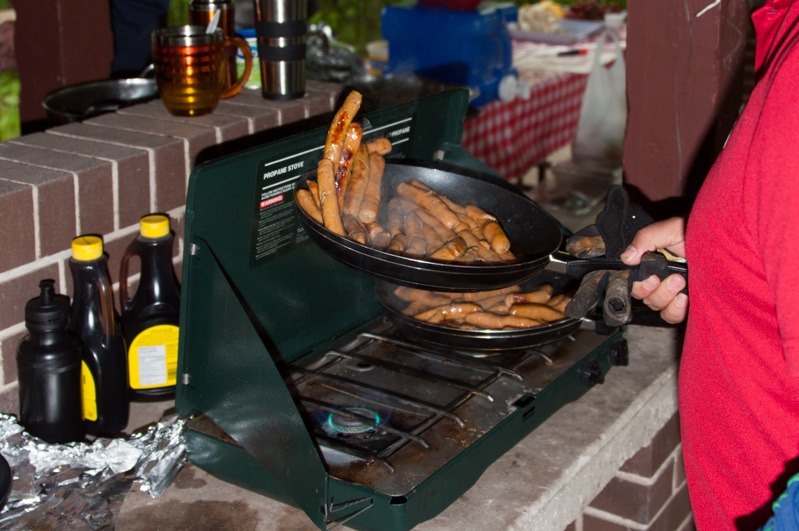 Sunday morning breakfast was sausages, pancakes and fruit as well as a lot of water. 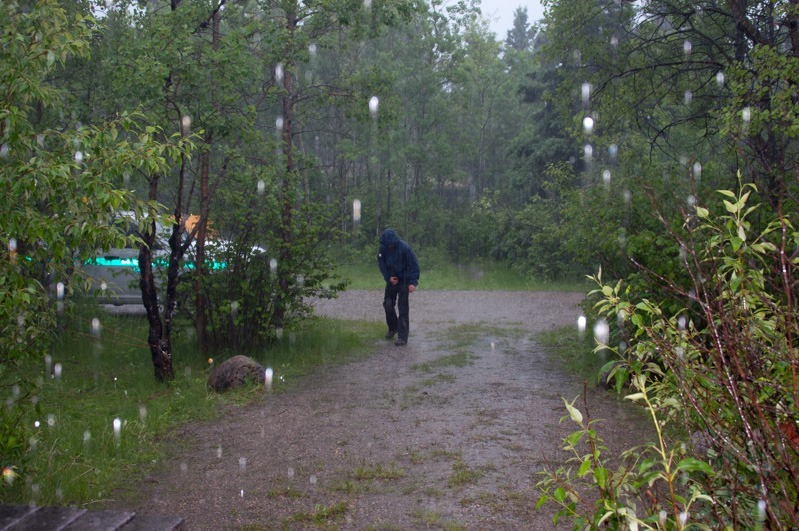 The white spots in the picture above are rain drops caught in my flash. Useless to say that this day would NOT see the planned hiking trip, the trail was washed away, nor the planned canoeing trip on the lake. Going canoeing on a lake in metal canoes with a thunderstorm overhead is not the smartest thing to do. 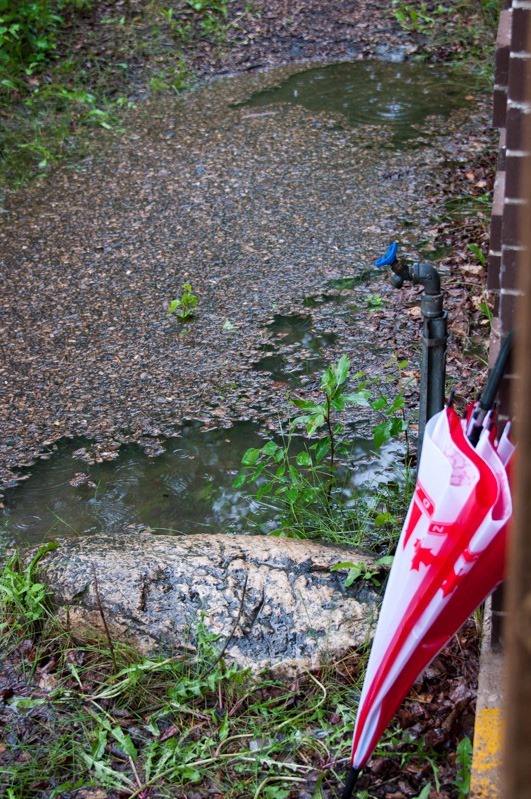 Puddles were “piling up” if they could, but it was wet everywhere and without any forecast of getting better during the day. We decided to cut the weekend short and head for home in Winnipeg. One last look at the cooking shelter, 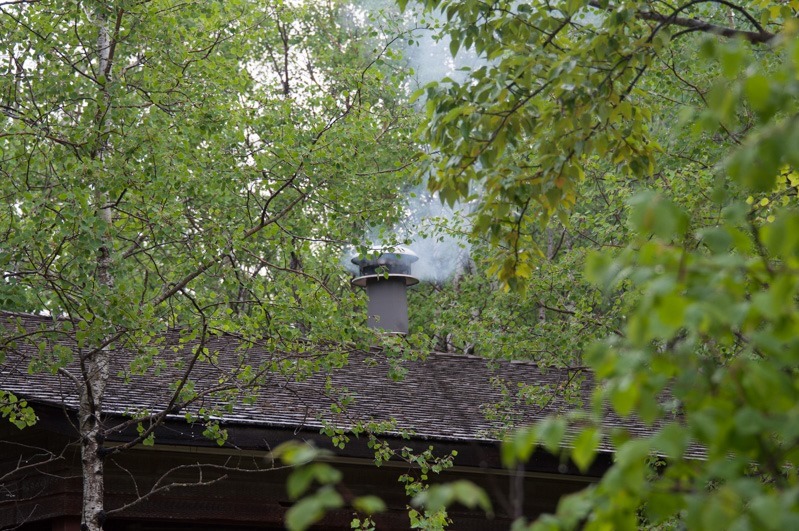 Welcoming smoke from the stove

and we were on our way. All in all a great weekend, one that I will definitely recommend to everyone, go to Parks Canada and see what they have for activities. The Learn to Camp weekend was definitely a success, despite the rain.

And for those wondering what a European camper had to do in a Learn to Camp weekend? Well, last time I set foot in a tent was about 25 years ago. Camping gear and methods have come a long way since then. Definitely worth the weekend!