A few days before Canada Day’s fireworks it’s always a pleasure to have your ideas and methods sharpened up for shooting the fireworks. In that spirit I went to the Red River Exhibition a few days ago to shoot the fireworks.

When I got in the compound, the outlook for fireworks was shrinking by the minute. While the above sky didn’t look that menacing, the one behind me did. And it delivered as well.

One of the first things you need for shooting fireworks, apart from a camera, is a tripod. Once the camera is kept in place, there is little that can ruin your shot. At least if there is no rain coming up to drown your camera on the spot. The rain became so heavy that taking shelter under a trailer remained the only option. Even RainSleeves made for the camera were not holding out enough.

After a full hour of heavy rain, it finally let up a bit and the prospect of fireworks was back. One of the pyros came to ask us if we were from the weather office and if we could give him some advice on whether to shoot or not. Hmmm… 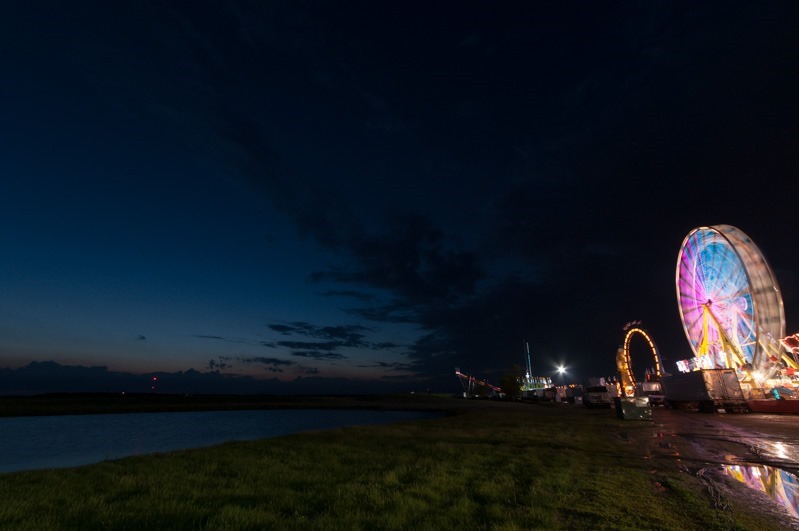 The next step in shooting those fireworks is to focus your camera on something far enough away. The ride here was kind enough to be lit up, although mostly empty. It provided the necessary focal point for the fireworks across the water. 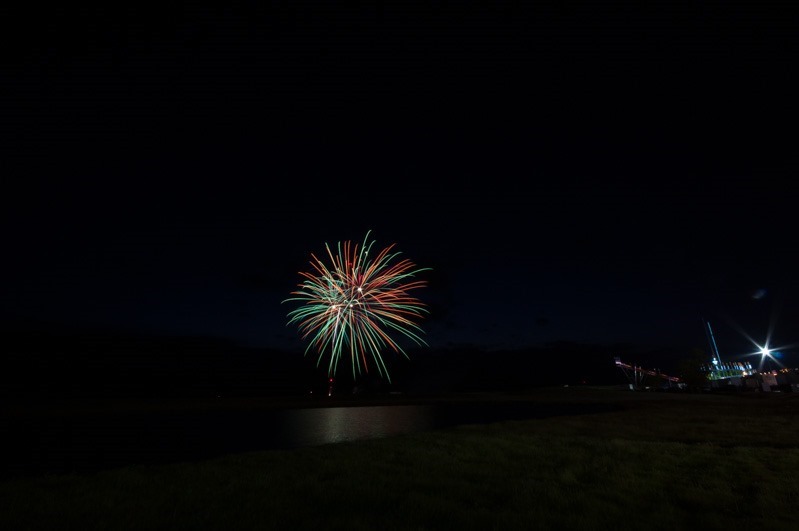 Fireworks are a bit tricky to shoot. Sometimes they are very bright and other times… well, not so bright. This first shot didn’t inspire me that much. I tried to keep some of the rides in view, but soon I noticed that all the action in my shots would be on both sides of the frame, with nothing in the center. 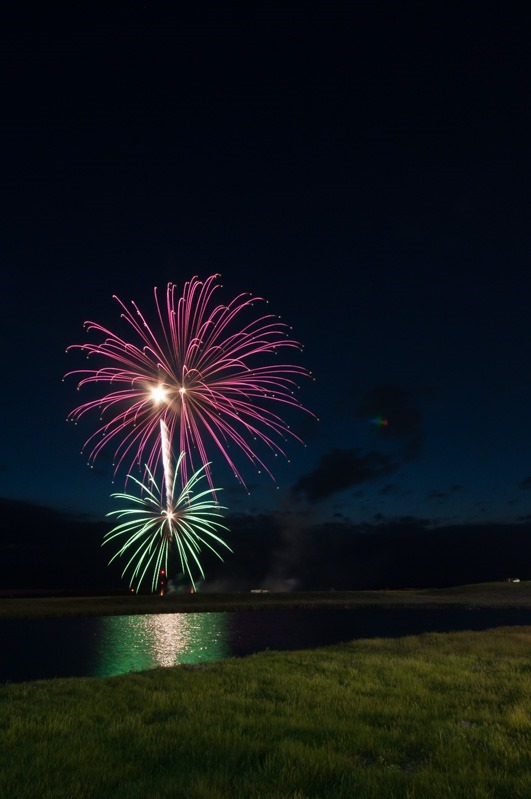 A little tweaking of the exposure time and a slightly different angle and voila! As an added bonus to the slightly longer exposure time, the foreground lights up a little showing some “interest” as well. 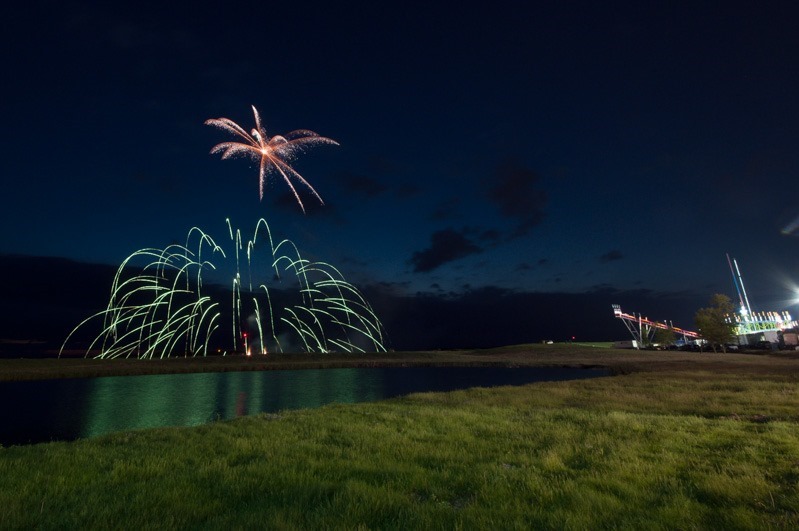 As for the rain? Well, the rain that had just vacated the premises did leave a small surprise for the pyro team. This shell didn’t go up as expected and exploded on the ground. I was nearly expecting the rest of the shells to go off all together at the same time. Kaboom in some sort of way. 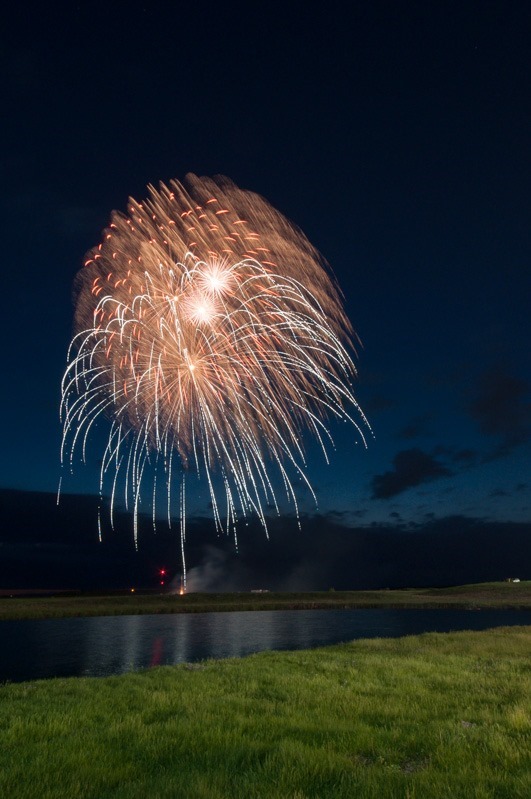 But nothing of the kind happened, lucky for them, pity for us. It would have made for some unconventional fireworks pictures.

For those who watch the TV program “Pyros”, this was a small show. But there were some interesting colours and explosions. 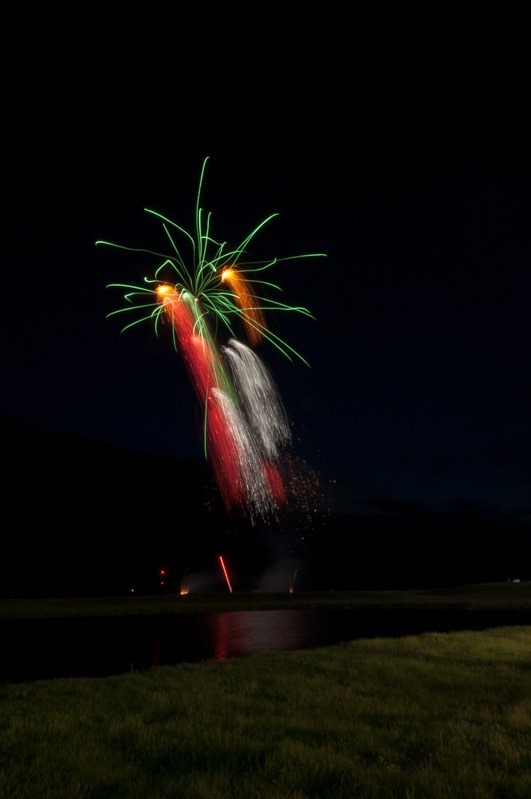 This shell, with those green trails was kind of interesting, with the green trails exploding in all directions and not keeping a straight path like all the rest. In combination with those “angel hair” shots the whole makes for a nice display. 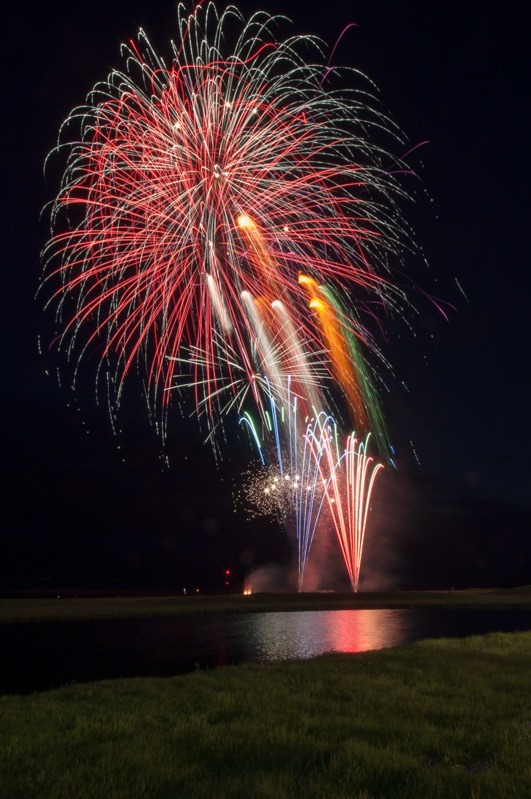 Shortly before the final bouquet, this combination came up. This is my favourite of the evening. When it was really time for the last shots to close the show, we were waiting. And waiting.

Then the lights went out on the rides close to us. So I guess that either we were too spoiled with big fireworks and grand finales or something went wrong due to that rain earlier in the evening. Underwater fireworks, in a way.

There will be more from Canada Day, I hope. Not sure if I will be close to some place with fireworks… just kidding!