A few days ago, I was looking for my phone but couldn’t find it. What better than to take a different phone and call yourself? It started ringing and I saw that there were quite a few messages waiting to be read. Ok, I understand that none of this is very interesting, but the issue was that there were plenty of message “sounds” but no messages at all. 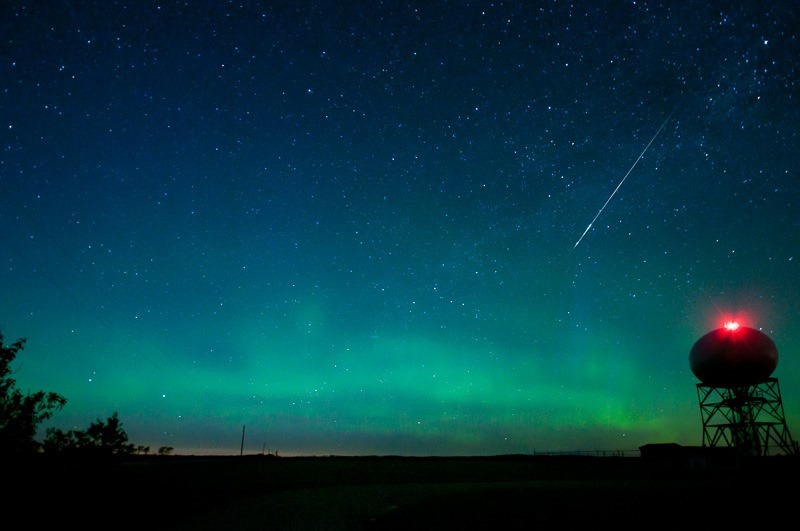 It turned out that my phone was warning me for aurora or Northern Lights. So, the first thing I did was go outside and see if something was visible in the night. The only thing I saw was clouds, clouds and more clouds rolling in. Time to call it a night and go to bed.

The next day, my phone obstinately remained silent. Of course, it was a Saturday, nothing to do the next day and a wonderfully clear sky. So, I went to the MFF forum to find the latest news and lo and behold, there were pictures of the previous night’s aurora!

Nothing upsets me more than this, certainly after a whole season of no-show aurorae. To calm my nerves I went to the English Gardens and met with a fellow photographer. He told me that he’d be going out anyway that night, even if no real storm was forecast. Of course I told him we could team up and go to some interesting places for a shoot. 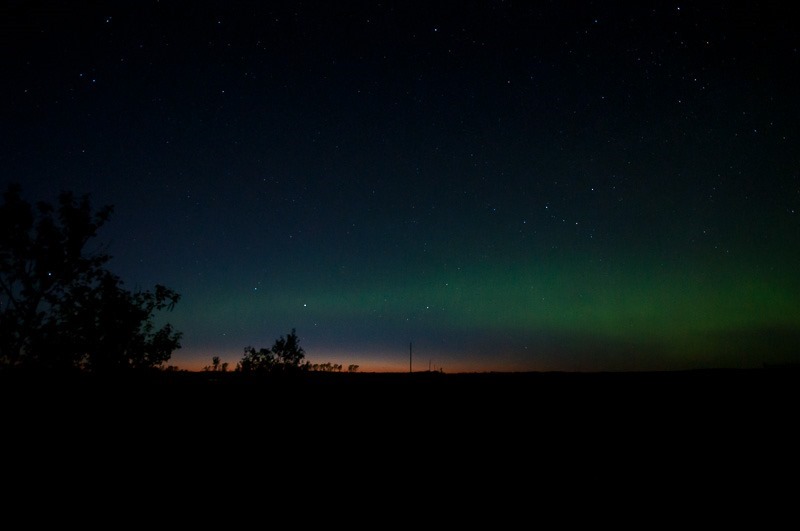 We went to the Woodlands Doppler station, a place where I had been before in winter. The above show was only to determine if there was any green out. Our intuition had been good. 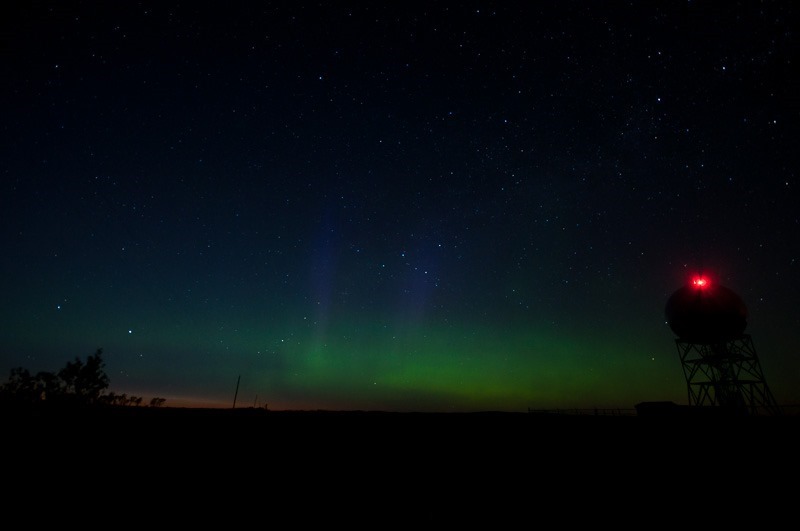 Some time later, some bluish, purplish spikes showed up and promised something more interesting. However, there is only so much you can shoot with a single element to choose from and we decided to go further up north. Before we left, I decided to shoot just one more picture and got this meteor shooting through the sky and the aurora. 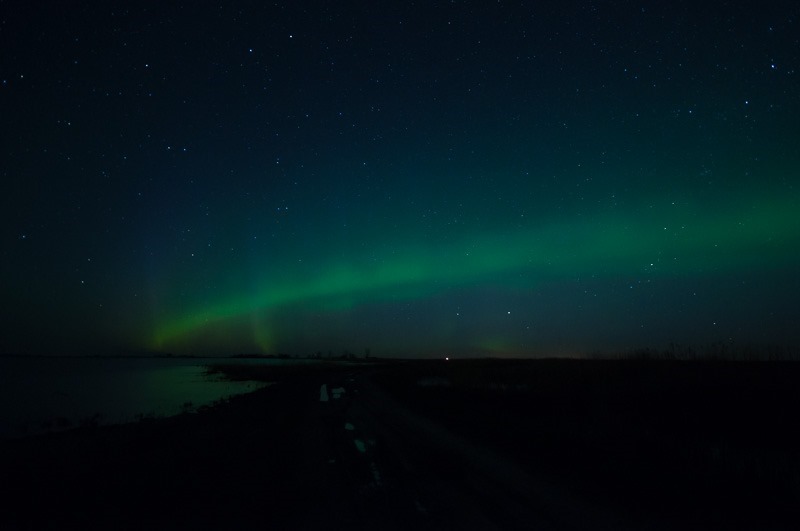 A weak band of light

When we arrived about 50km north on the shores of Lake Manitoba we were greeted with a weak little band. But like always with an Aurora, you have to make the best of it, otherwise you’ll go home with nothing 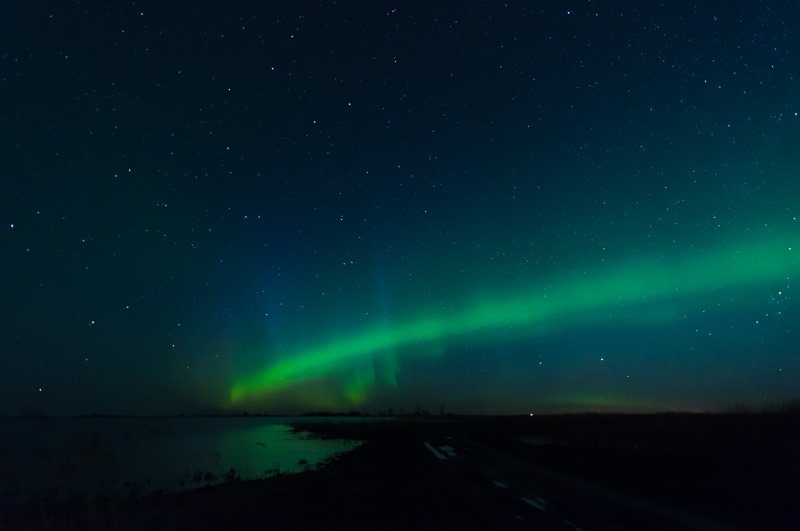 Some time later, the band had grown in strength. Finally things were looking interesting. I also could lower the ISO of my camera a bit, in order to reduce noise and other unwanted artefacts. As you can see there was quite a bit of blue/purple haze above the usual green. 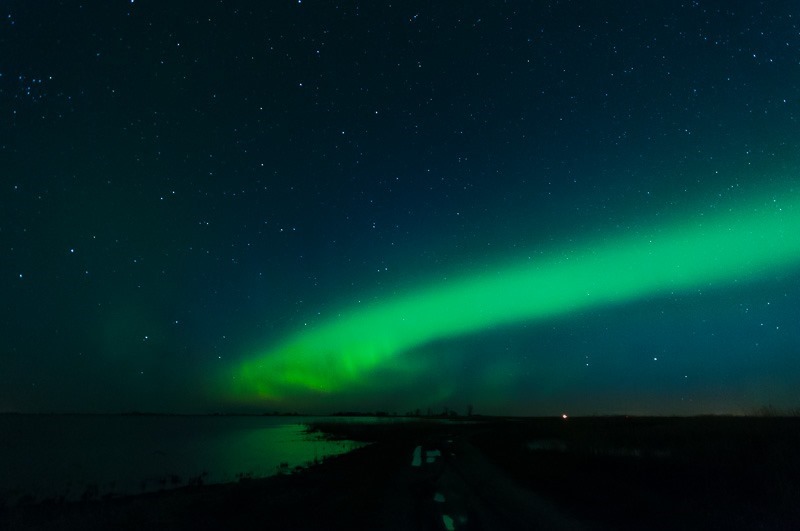 In a matter of minutes, the small green band grew and grew. At the “bottom” you can see that there is “something” going on. It looked like some kind of green cloud being torn apart by some hard wind. 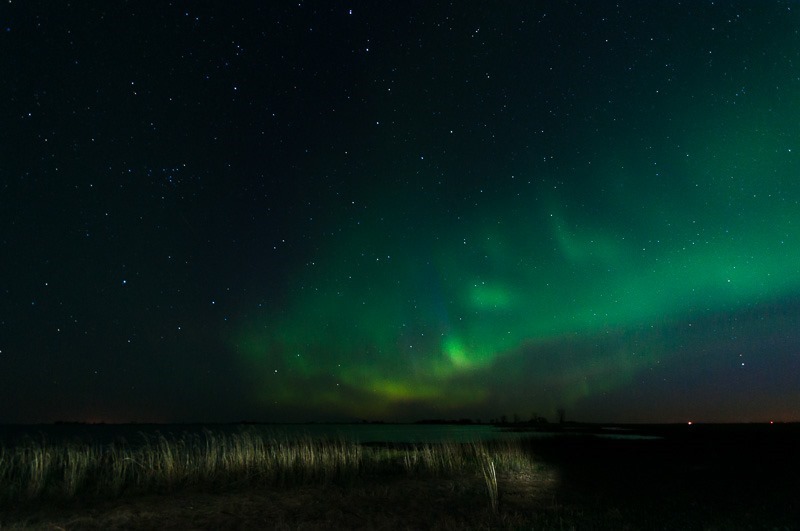 Not long after that, around 2AM the band literally exploded and started pulsating in the sky. 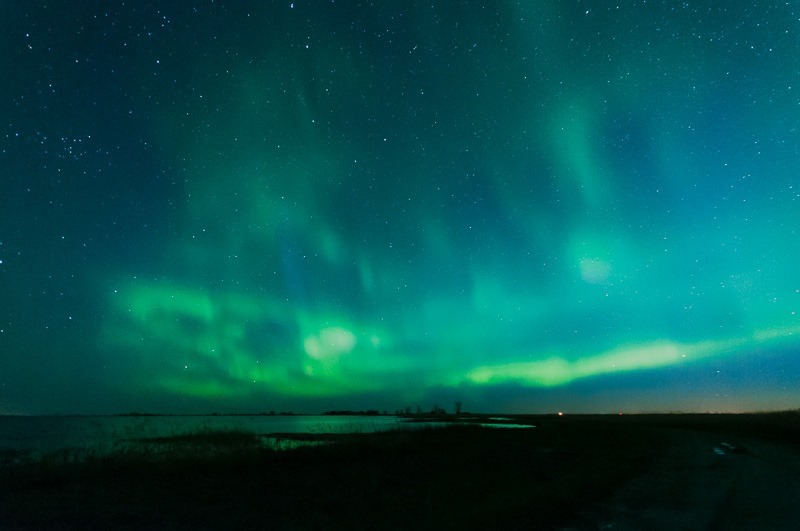 From that moment on, looking straight up into the sky, we could see waves of light moving from north to south. Just like waves of water on a beach. This was something I couldn’t photograph, my camera is not powerful enough for this. The show lasted for nearly an hour, with waves of light spilling over the night sky. 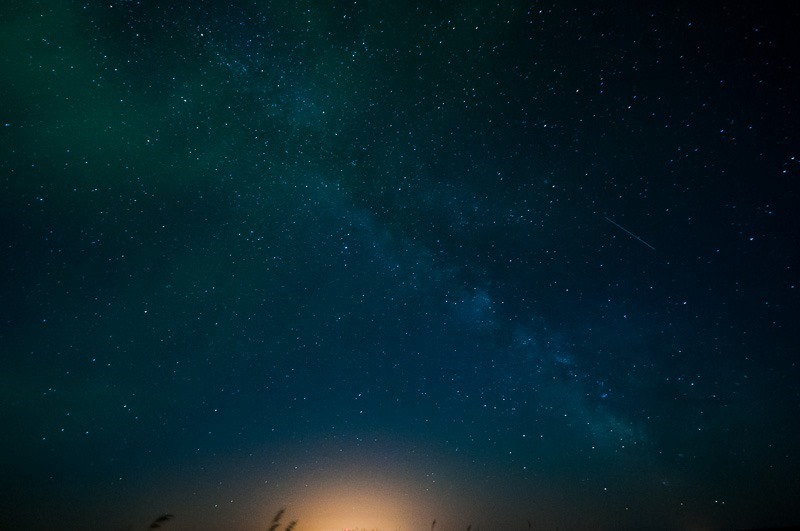 But even after an hour of a great show, there is only so many times you can shoot the same thing. Later, the pictures will all look alike and none will be more interesting than any other. So I decided to shoot something a little different. Cranking up my ISO a bit beyond reasonable, I got a perfect Milky way. Well, at least a part of it. The Aurora was still visible over the band of stars. As well as some light pollution from far away St Laurent. I guess that cranking up that ISO also cranks up the sensitivity for unwanted light sources 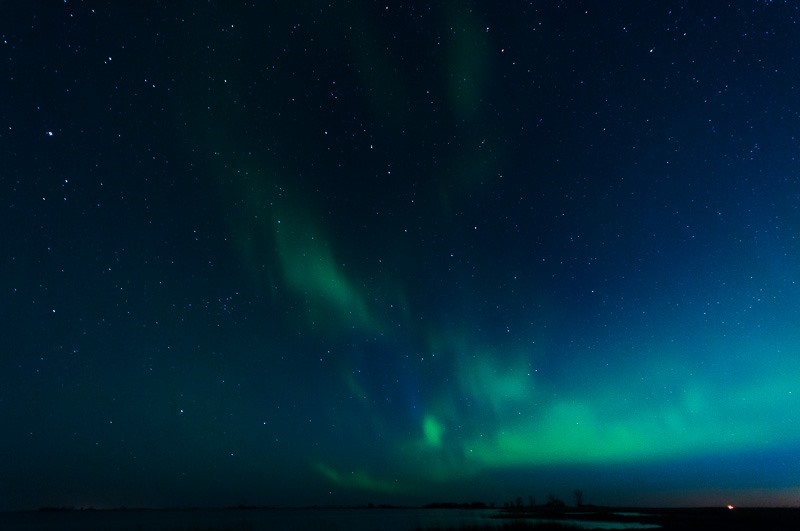 By now it was around 3:30 AM and we were getting cold. One last shot of the waning aurora and we were on our way home. It all comes to say that despite the non-forecast of the aurora, the show was incredible. Now I’m just wondering what source to trust for the next show.

Back home by 4:30AM, sleep came quickly

Hopefully we will get more of these shows during the next months! After all the solar maximum is coming.