A day with surprises

By now I start to get the impression that long weekends in Manitoba invariably include rain and clouds. Nothing much you can do about, but an “interesting“ phenomenon. So, instead of  staying home and showing sultry faces, we decided to go the the Pinawa Dam provincial Park instead. 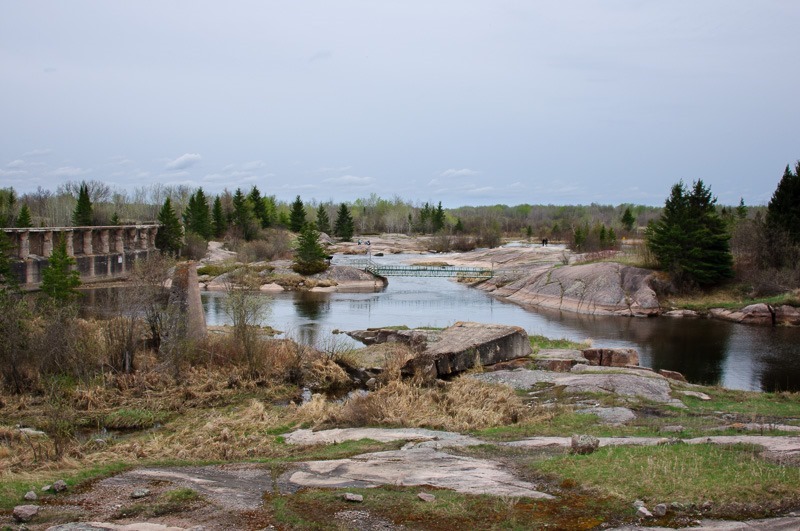 As you can see on this picture, the day was pretty grey and did not promise to get better. But we got a bunch of surprises. I knew there were snakes around, but

I had no idea that the Red Sided Garter Snakes were so numerous here. When we came to the park to select a fire pit for an easy barbecue, we almost stepped on a few of them. Garter Snakes are harmless, but I have no intention of letting them slide up my trousers. 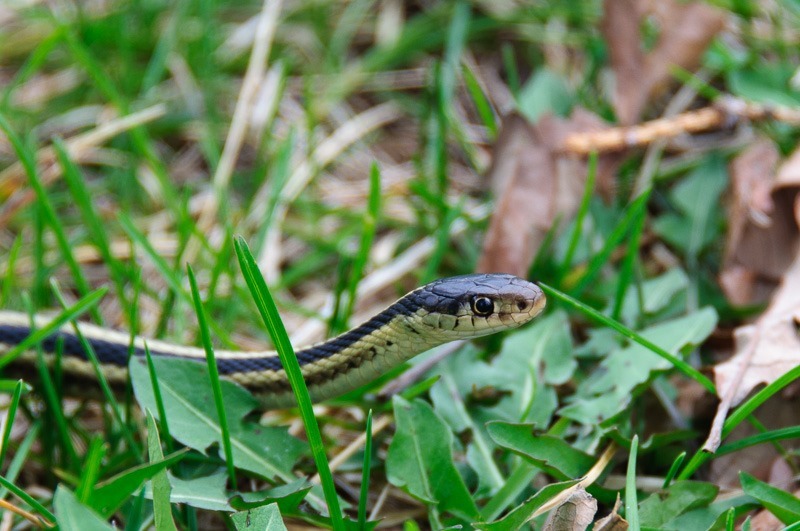 At first, I saw one and then a few more. Curious but also very careful. Unlike the snakes at Narcisse, Manitoba, these snakes do not necessarily understand the usefulness of humans around them… In Narcisse, the millions of snakes have a common knowledge of humans and let themselves even be picked up. When there are humans around, the crows don’t get close to eat their livers. So, in the end, humans are useful and should therefore be tolerated 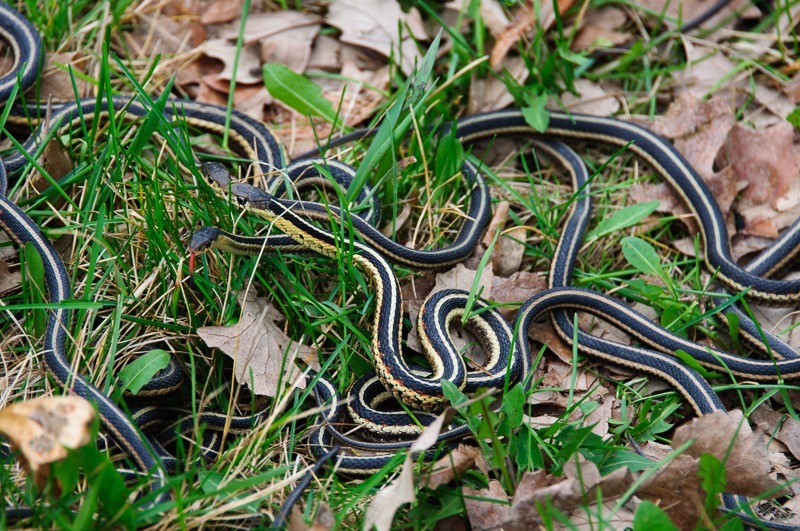 Not so in Pinawa. Here they bite a little, doing no harm, but since you have no idea what they have been eating just before this little bite, infections are still possible and care should be taken. Mating was already over, but they were still grouped together. So, I went to look for the place where they came from, and found a few small round holes in the ground near the place where back in the heydays of Pinawa Power Station, stood houses. Today those houses are gone, but I suspect that the cellars below were simply covered up. An ideal overwintering place for the Garter snakes. 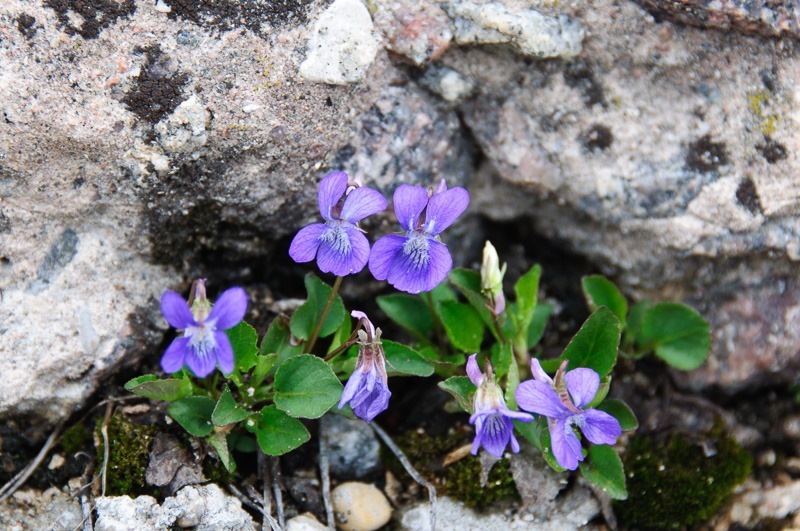 After eating sausages and burgers on the grill, it was time for a nice walk around the park to see if we could discover something “new”. We had been here already on different occasions, so photographing the dam and the ruins was a little boring. Those tiny flowers below the spillway were a nice surprise. I have no idea what they are called, but their colour contrasted so much with the used concrete that I wanted to take this picture. 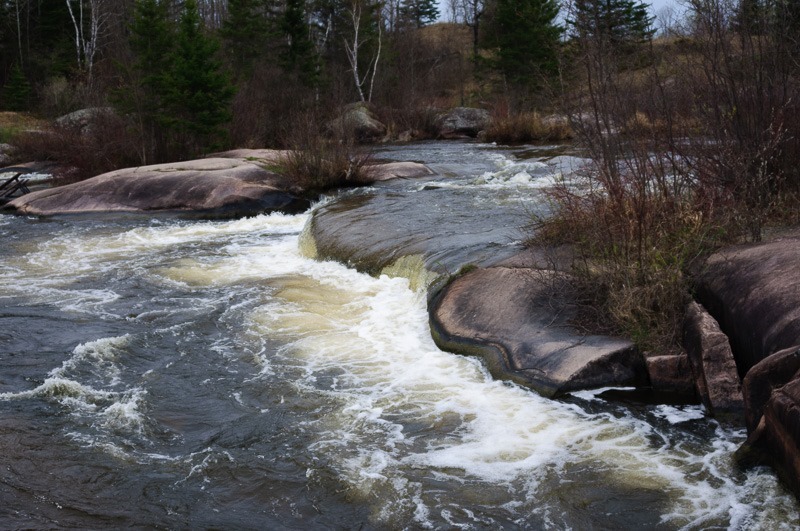 The water was next. It was a little low, lots of rocks showing, despite the general “flood warning” in the province. It was very cold water, hardly above melting temperature. Down below in the crevices there was still ice visible. We’re in the end of May here… 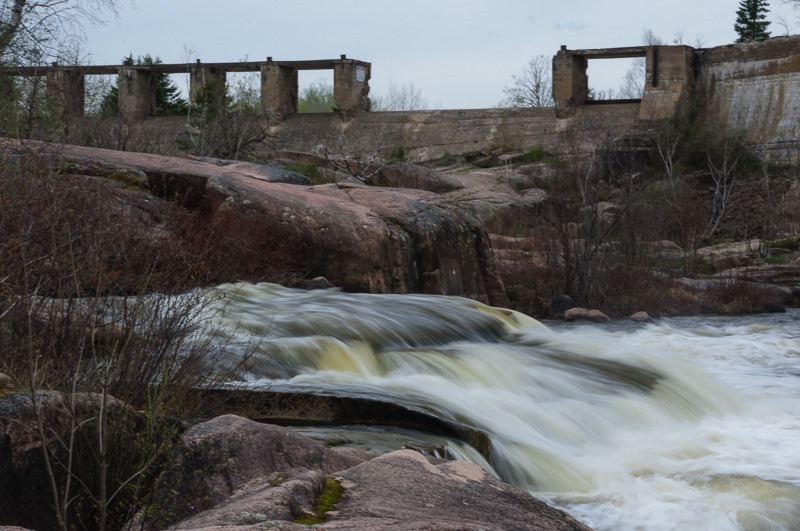 I tried to do some long exposures with this water, but I forgot my tripod. Talk about planning. My only option was to place the camera on some rock and try to keep it as still as possible. With and exposure of just 1/10th of a second, the camera didn't have much chance to move. The water still looks wild, but calm at the same time. Nice surprise to see that this can work even without a tripod (although it would have been way handier with one). 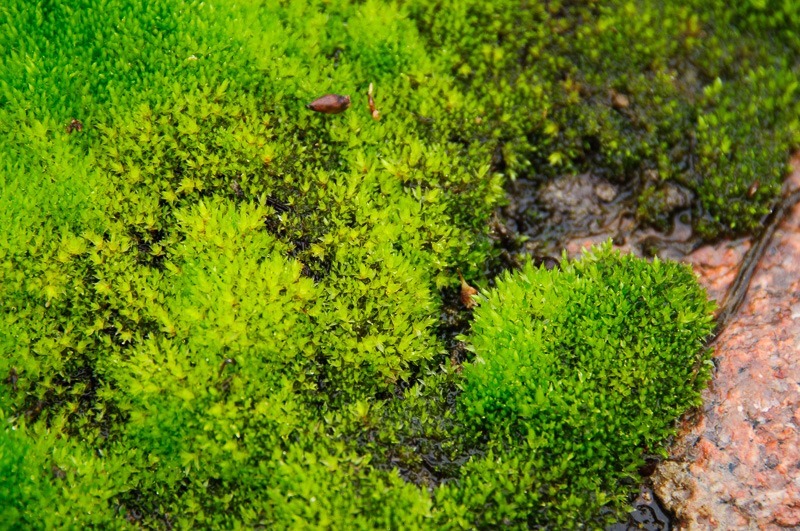 When walking on those rocks you need to be very careful. They can be slippery and they don’t care about the strength of your bones, ankles or any other part of your body. So close looks at the rocks was absolutely necessary. Those close looks also showed something that in summer will have disappeared.

This moss was so green that is literally jumped to my eyes. I tried to get a good close-up of it. 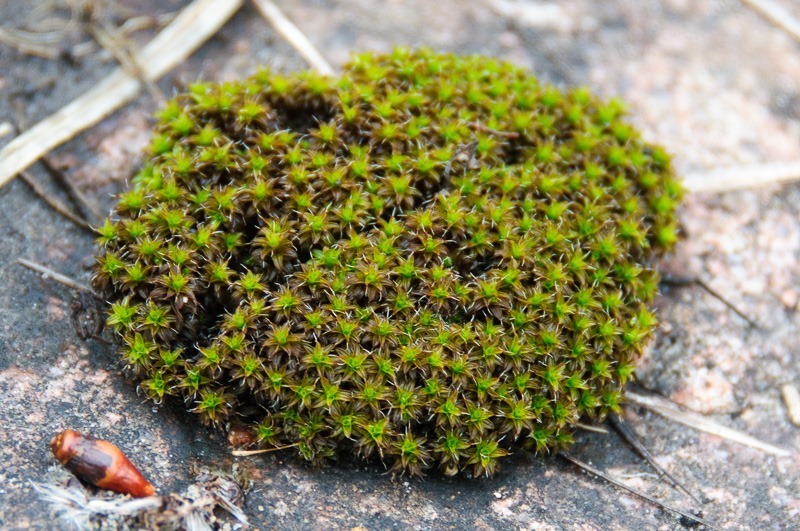 Perfection in a little package

A little further down the road rocks, I found this little patch of moss. A different kind, but up close it looks like perfection. Perfection comes in small packages, it seems. This patch was nearly 3 cm in diameter. Not one little leaf eaten by insects or disease. Had this been in a size of 25cm with leaves of a bigger size, it would be selling for a nice sum.

Starting as a drab day, it presented a bunch on nice surprises. As you can see in all of the pictures, the sun is nowhere to be noticed. Instead we had a great Softbox creating perfect light for small elements and soft flowing water.