Green! We were all waiting for green around us. But this green is cold and unforgiving. A few days ago the sun started spewing material in our general direction. Nothing really special, nothing to write home about. It happens all the time. 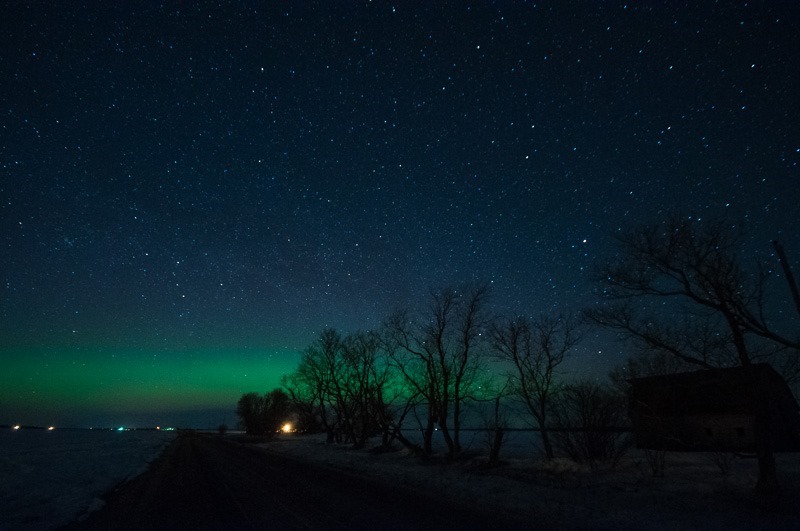 But when the sun starts emitting energy that can black out satellite communications, everybody is suddenly on high alert. Not so much for those satellites up there, but for the more photographic effects this emission can create. Talk about aurora.

An aurora Borealis or Aurora Australis is created when highly charged particles from the sun try to fry our brains here on Earth. The sun has tried this for billions of years and has never succeeded

. The reason for this is that those energy particles are being stopped at high altitudes in our atmosphere.

Stopping these particles does not go without any effects. The particles destabilize the atoms in the upper atmosphere, at an altitude of around 80km. The atoms (mostly oxygen and nitrogen) get wrecked and charged with lots of energy. However, those same atoms like their own stable state and will do everything they can to get back to normal. The process of getting back to normal comes with the emission of light.

You can find exactly the same process in your Energy Efficient light bulbs or even in your LED flat screen TV. Knock the hell out of an atom and when it gets back to normal, it will emit some light. The lights in your home are coated with a phosphorous substance that catches this tiny bit of light and transforms it into you reading light. Do you remember these old neon tubes? Same principle. 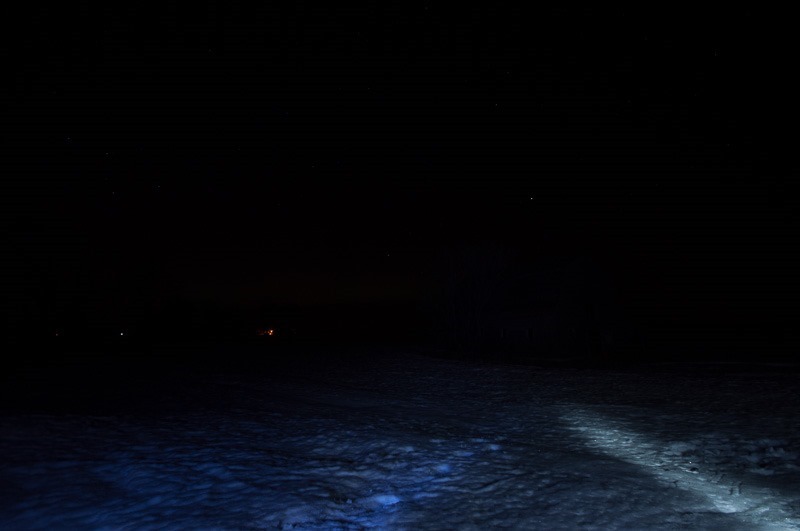 So, when the Sun on April 11, 2013 ejected some mass and particles, we went out on the next Saturday to catch the ever illustrious Aurora. The activity should have been at a maximum between midnight and 2:00 am. The first thing you have to do is find some interesting spot to plant your tripod and camera.

Going to the first spot, we wanted to find what should have been some old film set. We went there with about a dozen people of the MFF, rapidly becoming the most popular and active photo community in Manitoba. Some of us went through woods and deep snow to find the remnants of the film set, but none was to be found. During that time, the aurora showed itself a little. 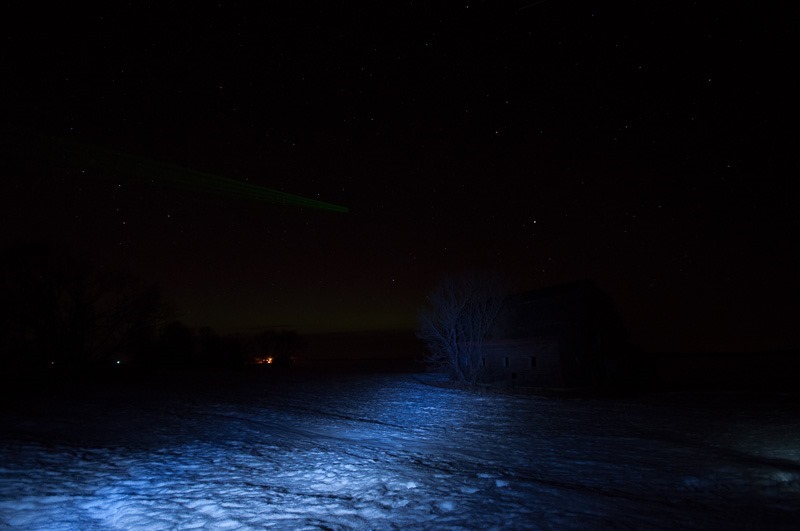 We decided to move on to a different place, trying to get some interesting foreground. The first result were the above two pictures, with everybody trying to get to his or her favourite camera settings. In other words, this translates into blinding lights and stray laser beams for infinity focusing. The above picture has such a laser beam. It is not a comet of any kind 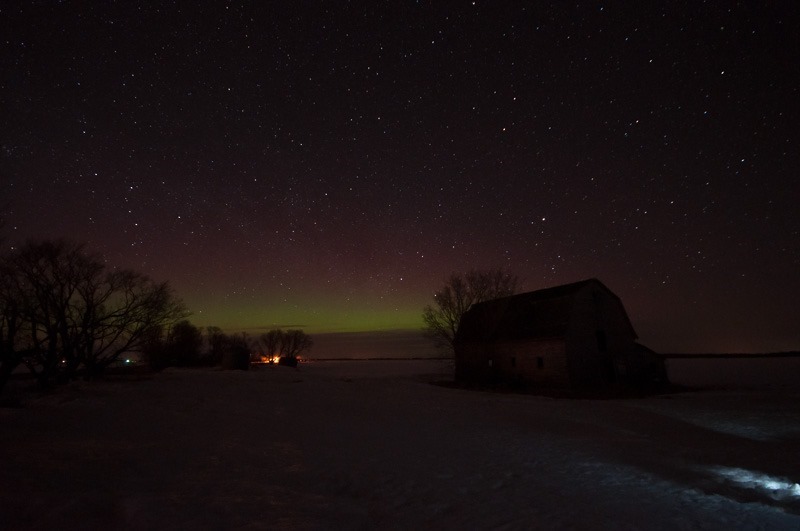 Getting there was the “interesting” part. Walking on hard snow is one thing, The next is going through that snow up to your hips and having your shoes full of wet snow. After this “event” everybody decided to avoid the space where I was standing. 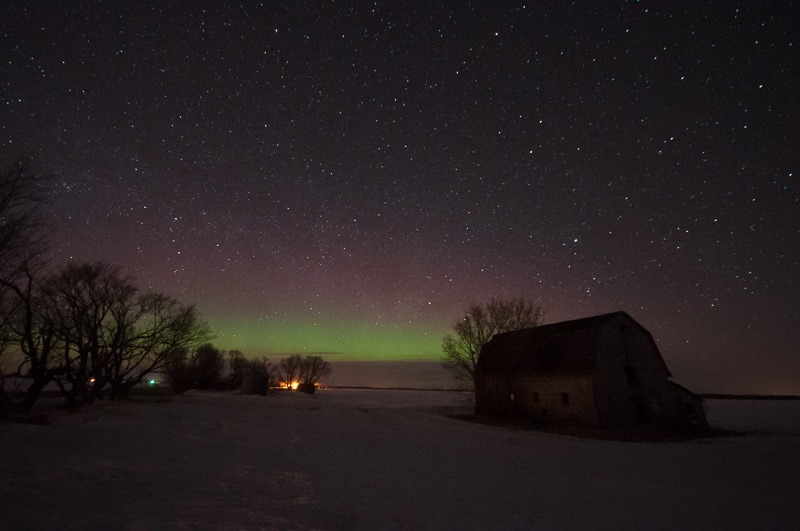 After a while, the cameras were set the way everyone liked and the lights went out. Then the aurora showed up, a little. The above picture was one of my first results. Lots of stars, little aurora. 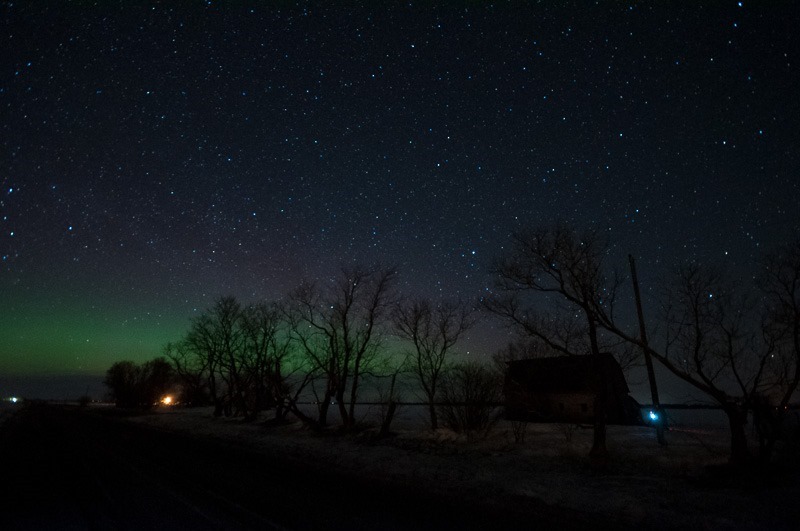 . I was still trying to keep that old abandoned barn in the view. But here I also saw that most of that aurora was more to the left/north. 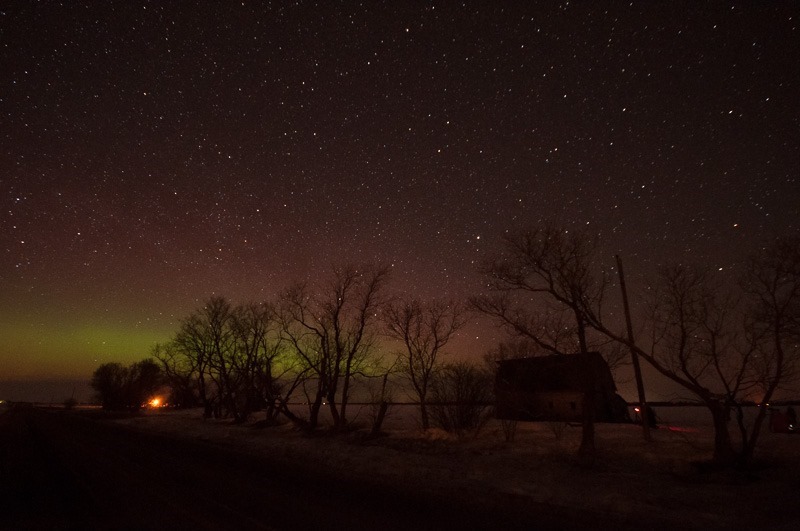 There, some sodium lights also showed up. They must have been several miles away, but the glow (Orange glow) was still very visible in the picture. Someone advised me to change the white balance of the camera so that it would be easy to change all pictures at the same time later in post processing. Call that “development” if you like. 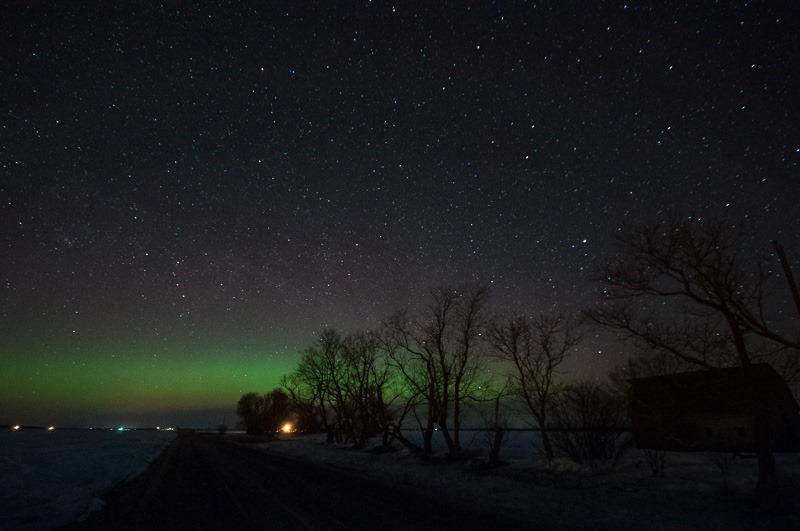 So, after a little tweaking of that White Balance, this last picture was quite nice. Apart from the fact that is looked way darker to my eyes, this is what we saw. A tiny green band, with hints of purple and red above it. If the earth’s magnetic field had cooperated it would have been a great show. Let’s stay positive, this will be for a next time

All in all a fun night, cold to the bone by only –5C, we left for home around 1:00 am. Not sure if someone else got better shots.