A cool walk in nearly black and white

Getting some fresh air here in Manitoba is not so difficult. You just have to stick your nose outside and you’re done. Even more so in wintertime, you just need to make sure that you get your nose back without frostbite. 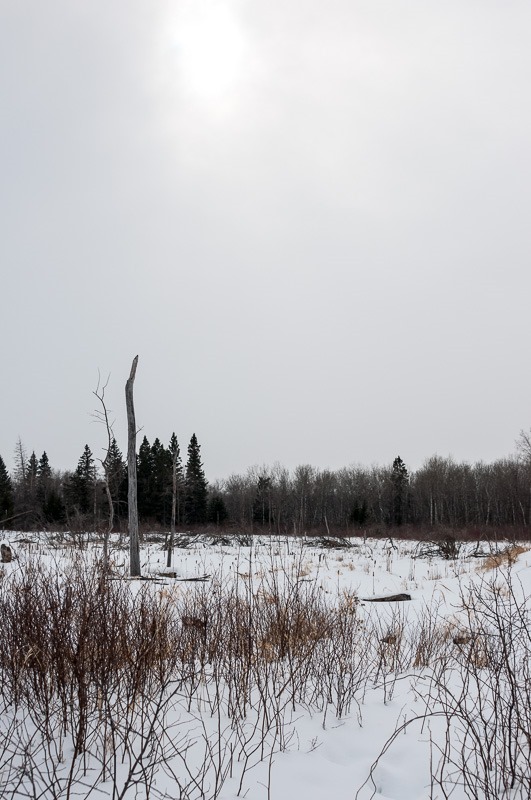 Nah, it’s not that bad. For a few days/weeks during winter it is very cold. For the rest of the time, it’s a normal winter with temperatures in a comfortable –5 to –15C zone. But what is the best of winter in Manitoba? The fact that on each walk you take, you

find new things, new evolutions from the last time you were in this or that spot. You might even find some sunshine. Yeah, yeah, we already know the song, you will say

. In fact, there is more sunshine in Manitoba than anywhere else in Canada. The twist is simply that when the sun shines, it doesn’t mean that it is warm. 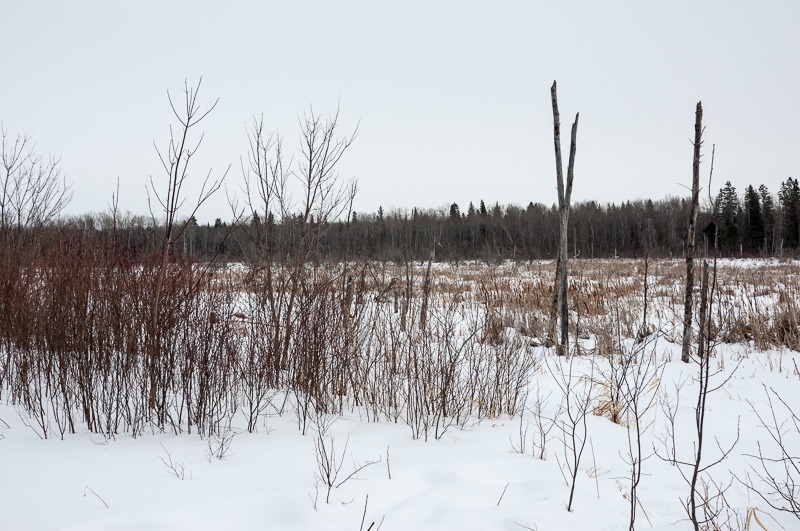 A little walk in Birds Hill Park last weekend was very nice. Not too cold, a mere –6C here and there. More here than there… Around the marsh in the north end of the park, there were hardly any visitors, leaving me with the sounds of nature. I didn’t hear any frogs yet, although soon enough they will be there. 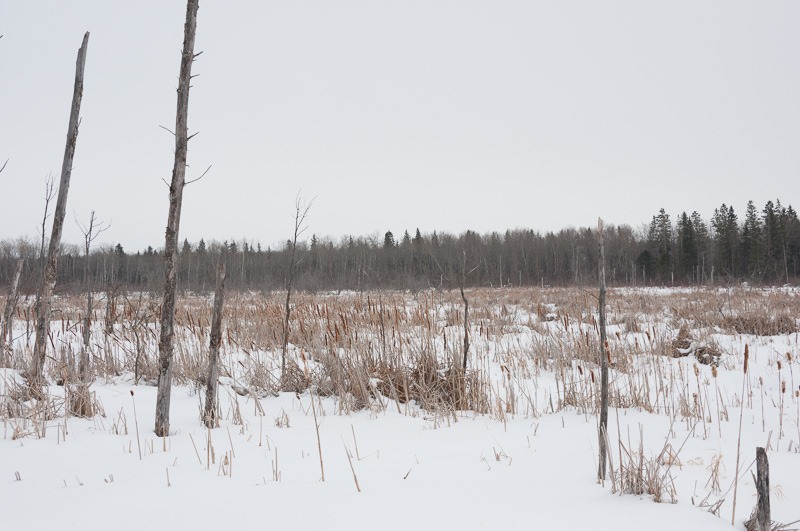 The marsh is still frozen, with a nice coat of protective snow on top of it. However, this time I didn’t try to walk on that ice. I was all alone, that’s where a small problem can quickly become a big problem. No need for any of those. In different places, I walked on the snowy path and saw the deer paws in the snow. They went down way further than I would have thought, by about 50cm. So the “path” was on top of 50cm of packed snow. Step off that beaten path and you’re up to your hips in it!

Or crack a little through the ice and get stuck in there for a mere 15 minutes… Nah, better stay on that beaten path. 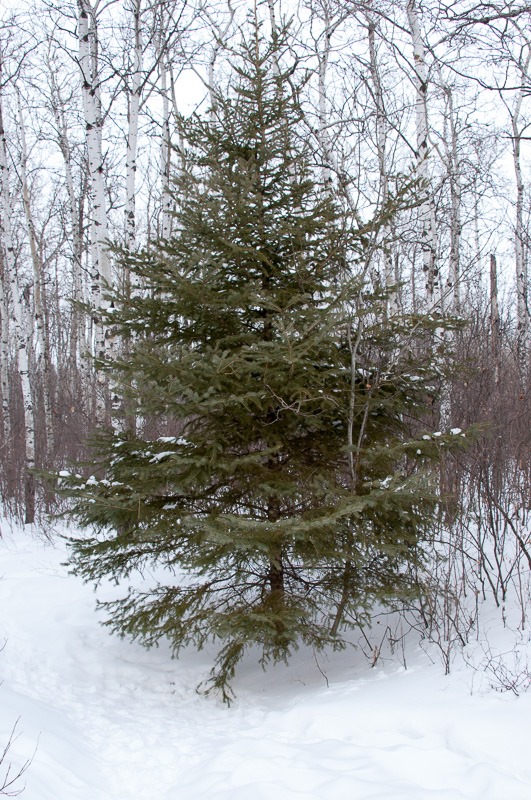 Sometimes you ask yourself if it is useful to shoot in colour in winter. Even more on a covered day. The above picture wouldn’t look nice in only black and white. I could have added a few red balls and other silvery ornaments, but then again, this is nature, not my apartment, eh? 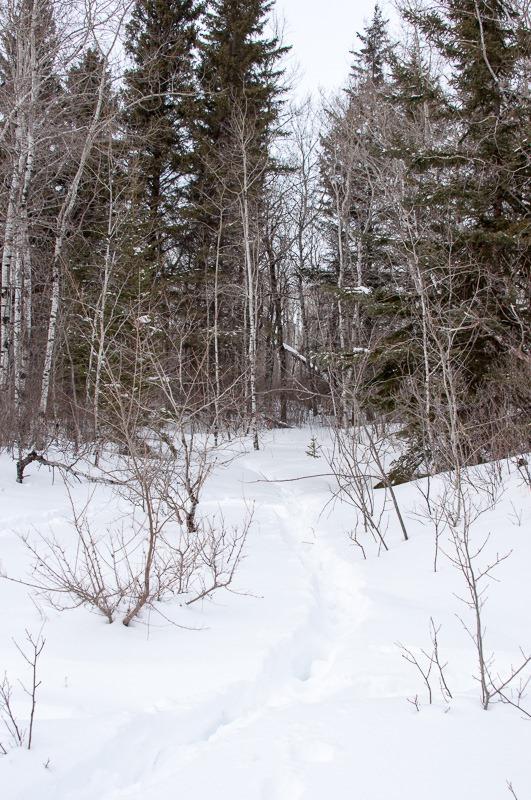 When you’re walking in that middle of the woods, you are wondering if there is any life around you. From time to time you can hear the Chickadees and a Nuthatch, but that’s mostly it. So you start looking around for tracks not made by any humans. Those big steps that look like tennis racquets are made by man. But those pointy tracks… deer. Probably White tailed deer which is abundant in the region. Even more, like in some places like Pinawa, deer simply feels itself safe being around humans. The closer the better 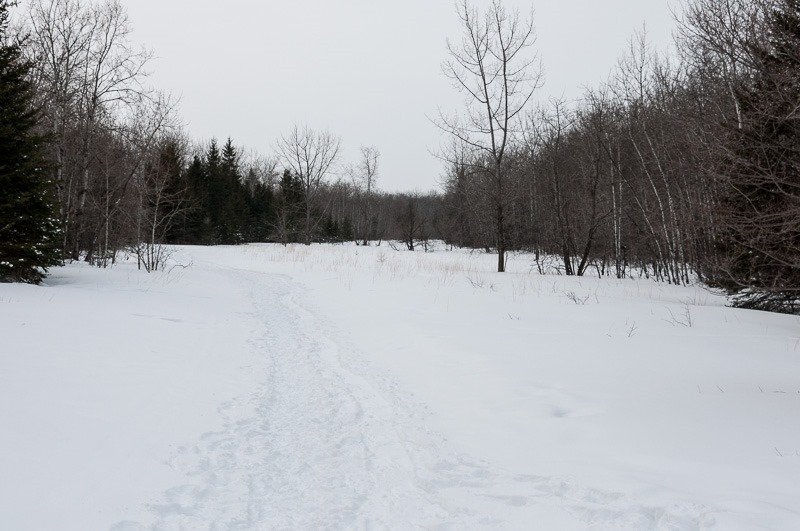 Then you look ahead again, thinking about the trail you still have to take to get back to the car. And that’s where the wind starts blowing in your face. Until now it had been nice and warm-ish, but with the wind it became outright cold. They say that in the forest there is no wind chill factor. Probably not if you stay between the trees and shrubs. But here it was cold… 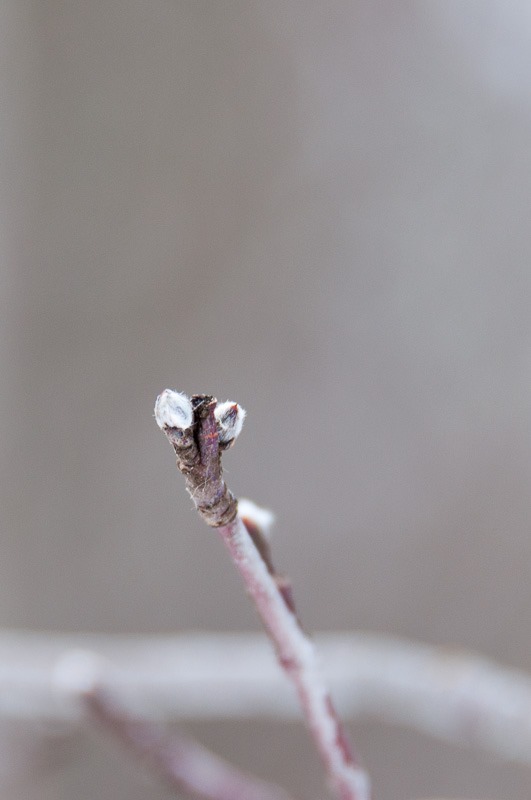 And then, as a surprise, a sign of spring. Ok, it’s a very small sign, but a sign nonetheless. These catkins announce the retreat of winter in the not too far away future. Not that we have to worry about that, but it’s always nice to see some real signs.

So now we have something new to hunt for with our cameras: signs of spring.