Sculptures in the twilight

It’s time to go and see the snow sculptures made for the Festival du Voyageur this year. One thing is sure, you won’t see the same next year! 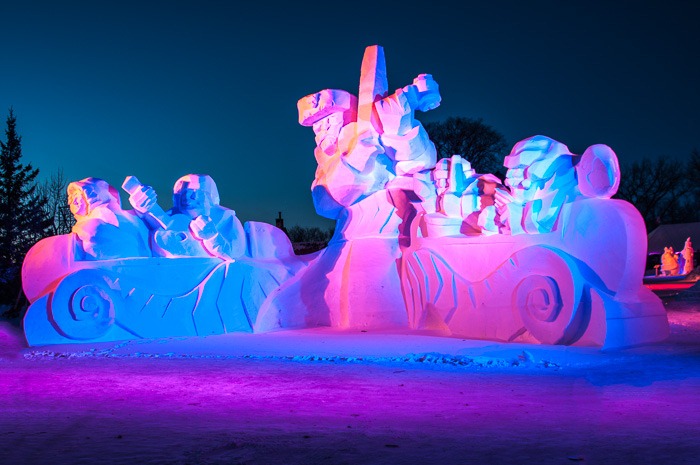 Like every year, the level of skill to make these sculptures is very high. No collapsed sculptures this year…

Oh, Last year, there was hardly any snow at this period. As a result of a fit of Mother Nature, all cold air remained confined to the North Pole area, as if to say: You won’t get my snow and ice this year! And effectively we didn’t get a decent winter last year. This year, however, is a very different story. Let’s say a more “normal” kind of story. 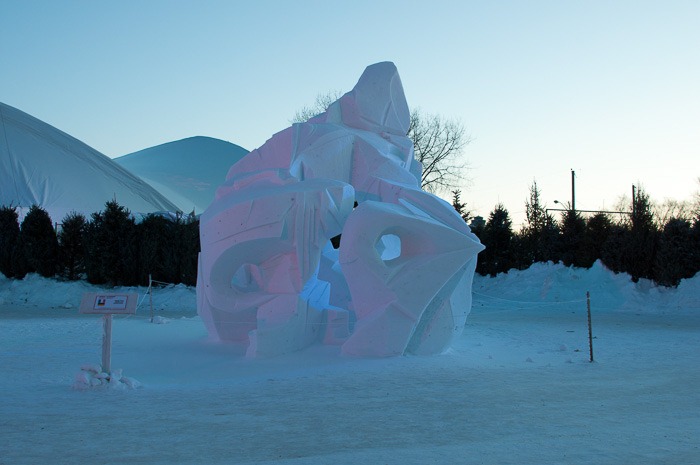 Heads, tails, or both?

One of the Photo Clubs in Winnipeg succeeded in getting access to Voyageur Parc ( in French, s’il vous plaît!) during the one day that the exhibition was closed. Great! No people around except for some other photographers. Easily bullied out of the way 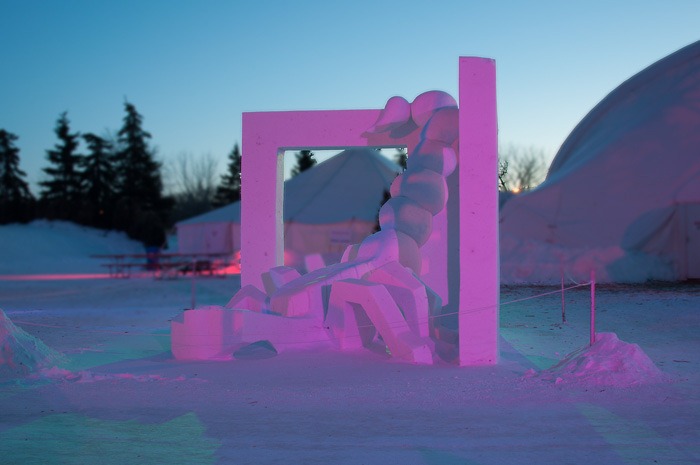 I arrived around 6pm, while there was still enough daylight to see where I could park my car without getting it towed away. This is called the “blue hour”. Many of the photographers were just walking around, waiting for the daylight to leave. 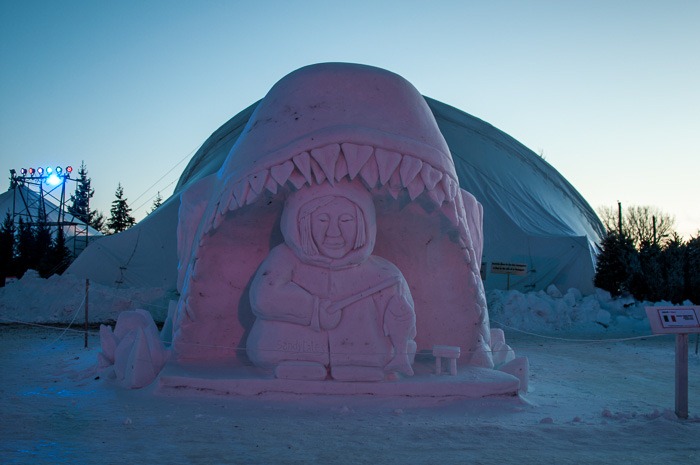 Watch your back, yeah, for sure

I, on the other hand, was already taking advantage of that blue hour to get some more interesting shots of the sculptures. Hi-intensity LED lights were installed to illuminate them. So, with the sky still light enough and those lights already on, the effect was nice and subtle. Some of the sculptors, like the ones from the above sculpture had a nice sense of humour. The above work is called “Watch your back!”… 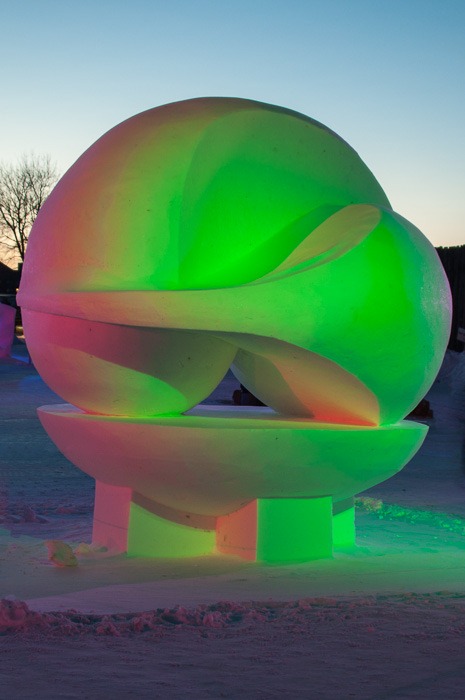 The only sculpture that had some different lighting, different from the red and blue that seemed to be everywhere, was one of my favourites. It is called “Rotation” and made by the team from Estonia.

Now I am in no way an art critic, so don’t take my word here for the absolute truth, ok? I am just saying what I think of different sculptures and my opinions are mine and mine only. I guess that is why it is called MY blog 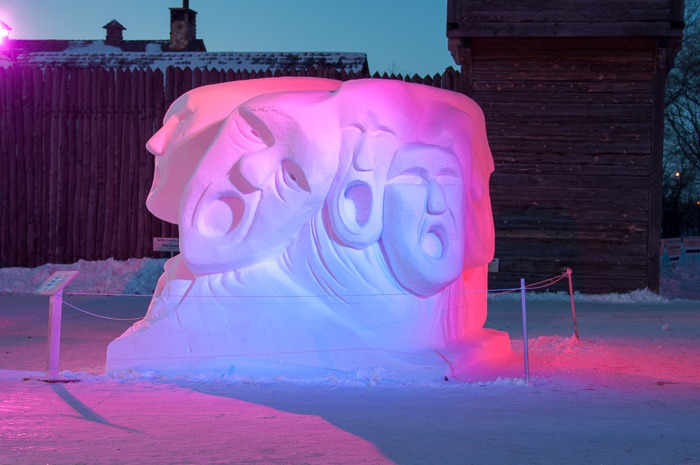 The next sculpture reminds me of some kind of memorial, but I don’t exactly remember where it was. I think I have seen this type of sculpture before, albeit not in snow. In a way this sculpture looks pretty much full of pain. I don’t know if this is how the sculptors felt when arriving in Winnipeg by –29C… 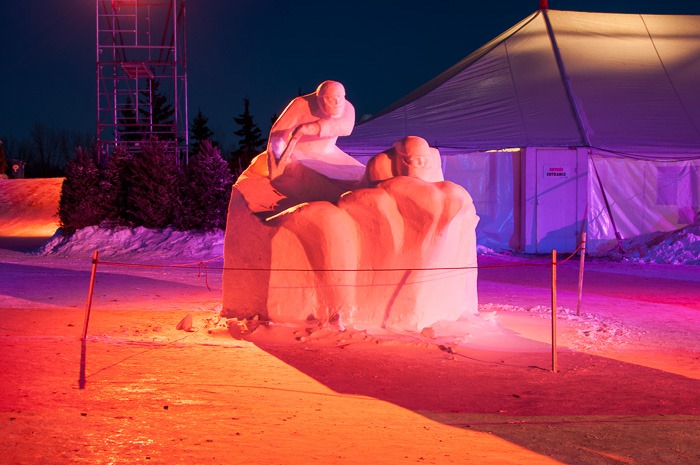 I was told that many of the artists come from countries where snow would be a disaster. Colombia for example should never see any snow, should it? In fact those artists are sand sculptors for beach competitions. Doing it here in the snow is different, but also very much the same. Apart from the sun tan, I guess. 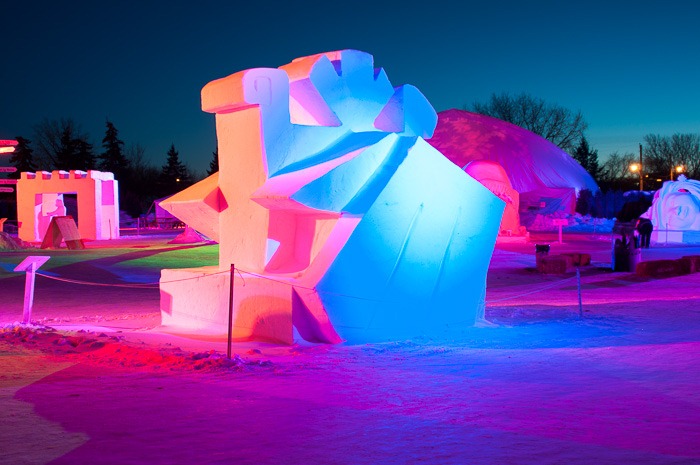 Some of the works are a bit strange for me. I can find heads nor tails in them. Perhaps someone cam enlighten me before they melt away? 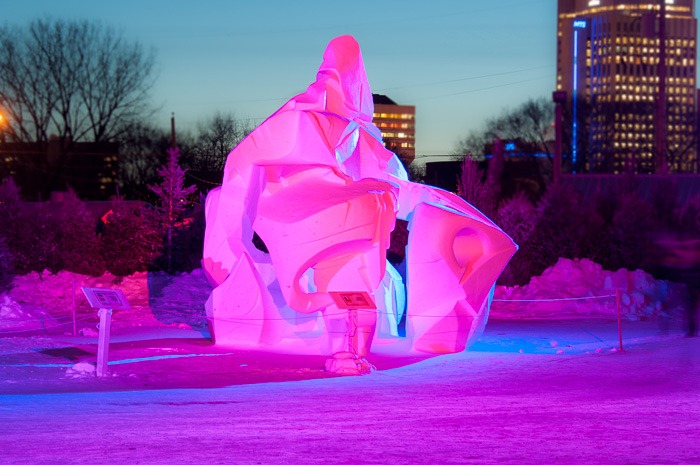 Your guess is mine

I guess I will have to go back to the park to read the signs and try to find out what the sculptures are representing. Somehow I find that strange.

But then again, I have never been a modern art kind of guy… 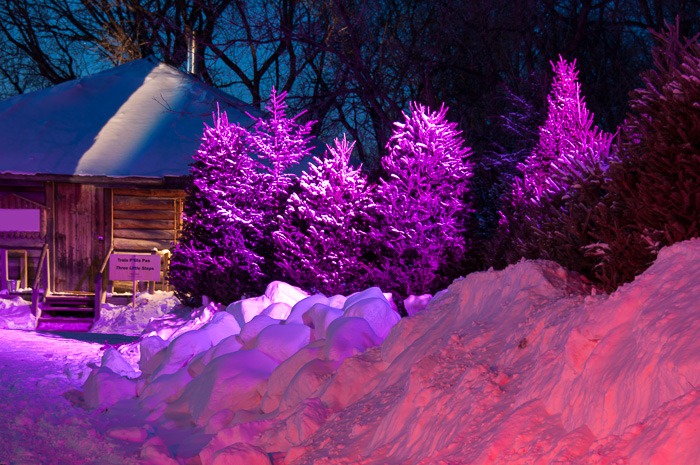 My kind is more “nature” and “recognizable”. Mother Nature can be quite psychedelic all by herself, if she wants. Given a little help of some LED lights, of course. This last shot appeals to me for the simple reason that this was there, without having been fabricated during long hours of freezing labour.

Who knows, perhaps next time I will have more information and different shots of the snow sculptures. In fact, it was way too cold to take pictures of the descriptions. My hands were so cold that I could hardly put the camera away in my bag before leaving for home.

But then again, the Festival might already have closed its doors until next year. No promises