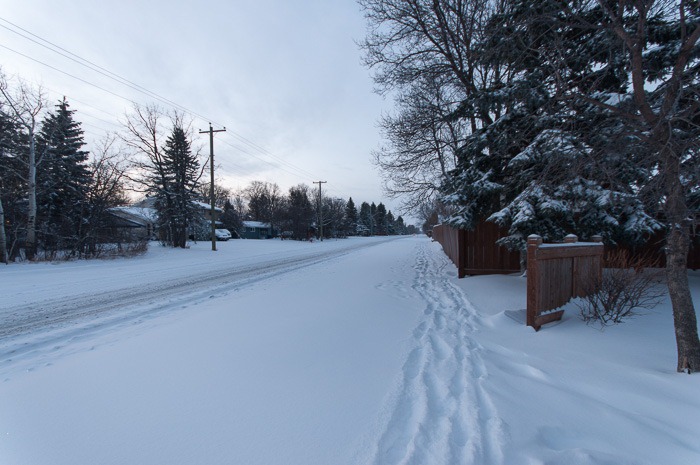 Last weekend we had the first winter storm of the season, with about 25cm of snow in the city. Some say this is snow that will stay for the season, but I’m not convinced yet. That’s why you need to record those first impressions.

The next time a winter storm comes around, the view may not be so pristine. 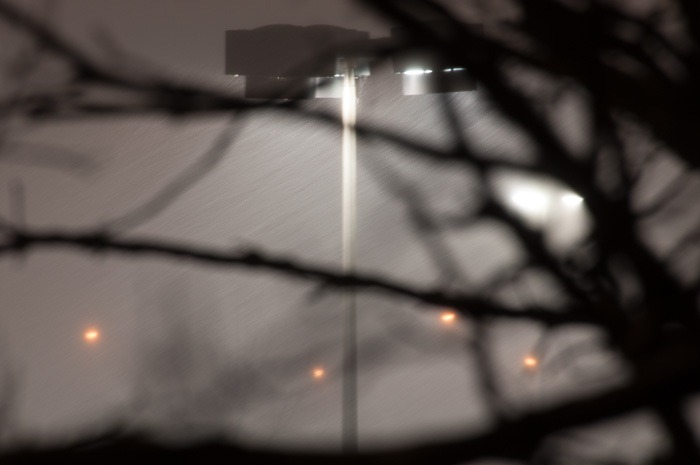 It all began with a pretty heavy storm, bringing in lots of moisture and cold air. The result: snow. The above picture from the view of my balcony shows you a few things, all at the same time.

First, it shows you that it was night, the street lights were on. Second, it was snowing heavily. Until there, nothing new. It also shows that auto-focus on any camera will have a rotten time focussing in heavy snow. All those snowflakes will mess with the auto-focus system like you have never seen before. 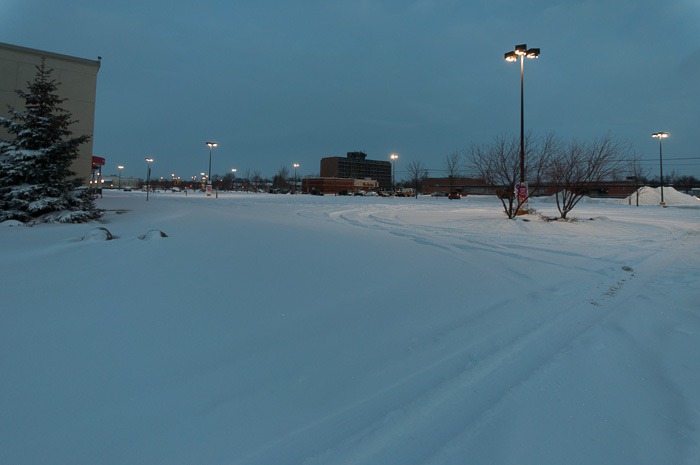 Time for me to go to sleep and hope for better times in the morning. That morning, I was up early, not so much for the expectations of the snowy weather outside, I can assure you. Once that was taken care of, sleep was hard to regain. I decided to go out and shoot a few pictures in the neighbourhood. 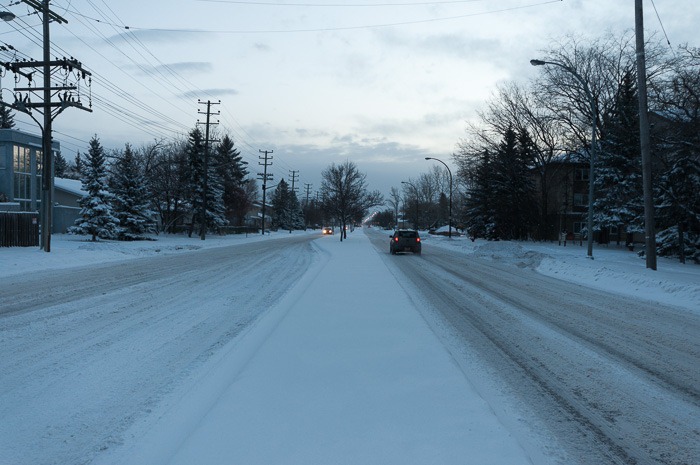 As was to be expected, snow covered roads, ready to be ploughed by city material. The views were quite interesting, even if I say that myself 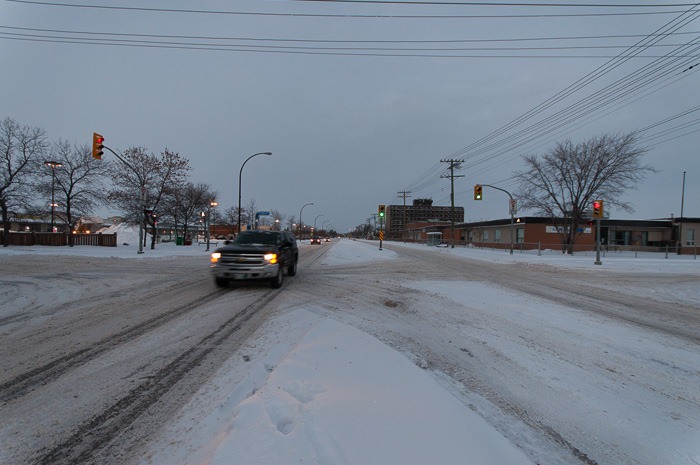 Battling through the snow

Grant avenue is one of the bigger roads in Winnipeg, so I was lucky to get there before the cleaning crews had taken all the snow away. I guess that the enjoyment was entirely mine, not the drivers’ of the cars on Grant. 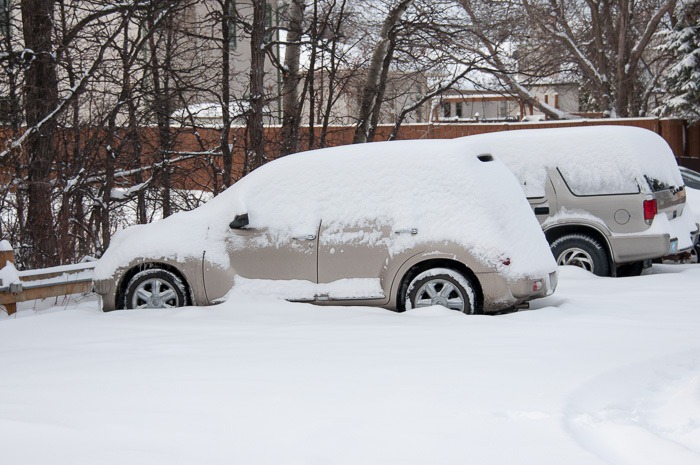 Not ready for takeoff

Our own car was buried deep in the snow, I was not even sure it would get out without slipping and sliding. Eventually it did and after another 30 minutes of cleaning and warming up, it was ready to go.

I was ready for a trip to Fort Whyte Alive, not far away from my home. Arrived at the gates, the only thing they had to say was: Closed. Hmmm, that was a bad start as far as photography was concerned. The same went for the English Gardens. Other places and parks were too far away to risk it in so much snow. 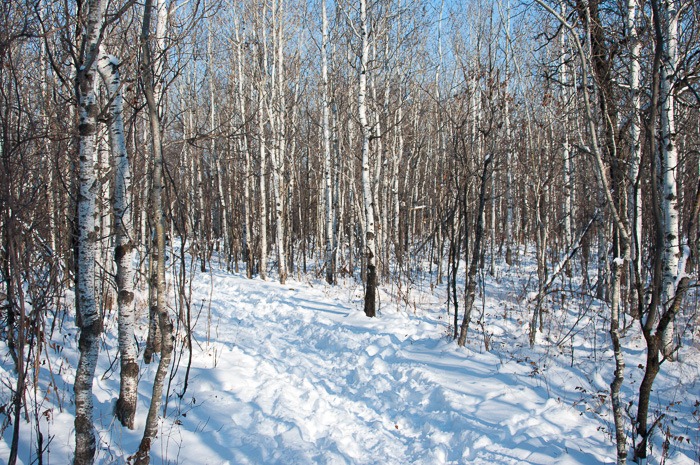 I had to wait a few days before the weather was good enough again to get some pictures in Fort Whyte. Most of the trails were unrecognisable. All covered in snow, but I was not the first one to get there. Oh, well… 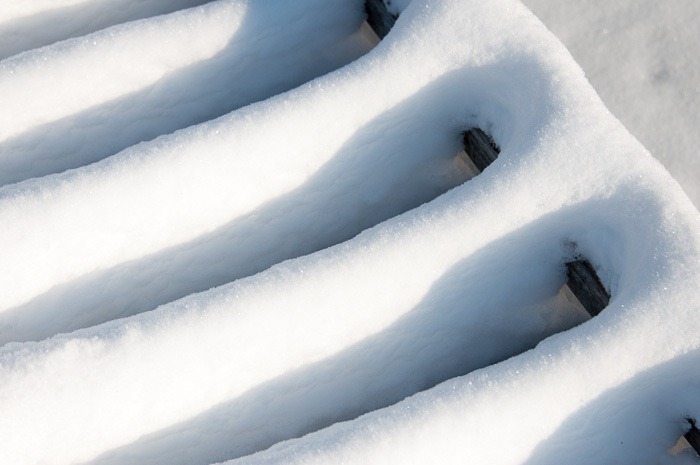 So I tried to get a bit creative with some snowy subjects and I tried to get some critters of any kind. After so much snow, there were not many of them around. 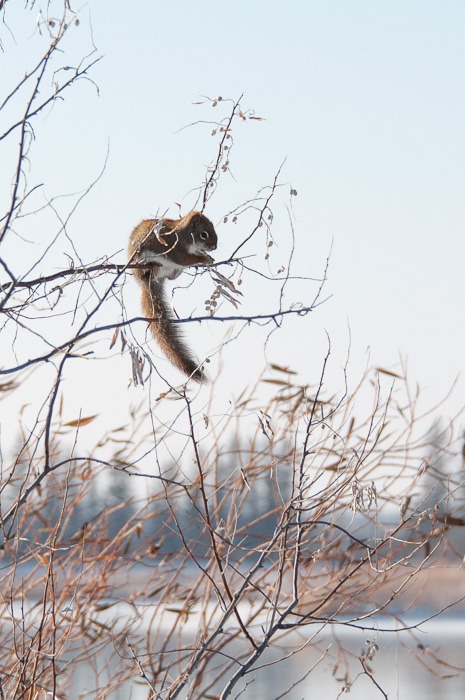 This squirrel was lazily hanging on a tree branch, trying to get some sunshine and warmth. It was totally aware that I could not get close enough to be a threat to it. It even didn’t yell at me as most of them usually do. 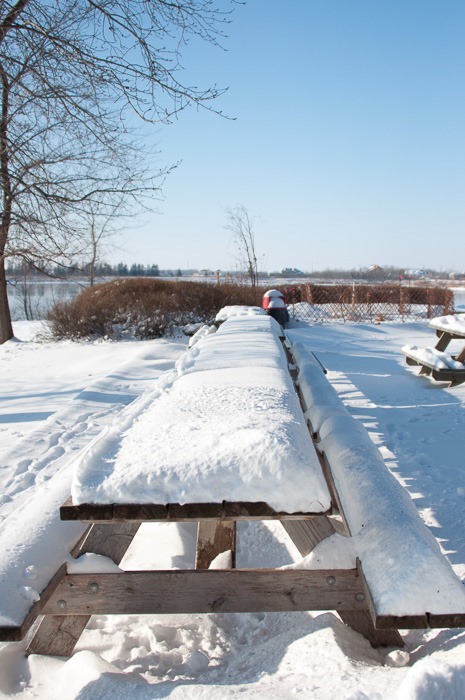 Getting back to the car, I noticed that eating outside was out of the question for the foreseeable future. A nice view, but too cold to go and sip a coffee. You may notice that some snow is melting in the sun. On dark wood like this, it will even do that by temperatures of –20C ! 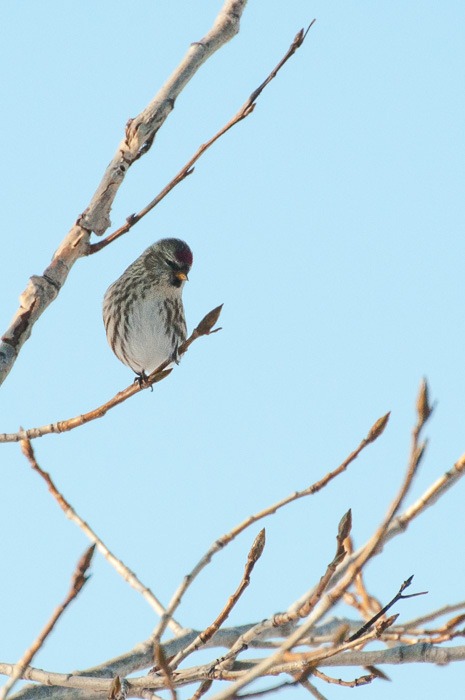 Already for some time I had heard other photographers talk about some newly arrived birds, the Common Redpolls. Until now I hadn’t had the chance to see them. Knowing that they are pretty common, I started to doubt my abilities of finding them. Last year they were close to the feeding stations, but this year, they seemed to have set up camp elsewhere.

But finally I heard them chattering in a tree and waited to get a good view of them.

So, here is one Common Redpoll.

All first impressions of the winter of 2012-2013. First impressions are hard to redo, so I thought I’d write them down. A great moment for taking pictures, even if the real first days were without possibilities of getting anywhere.

Doing self portraits as an alternative didn’t really attract me. I’m pretty sure you can agree with me about that.