And yet so powerful. It has been a while since we have seen the sun here in Winnipeg. Many have complained about it, none have been heard and nothing has changed. 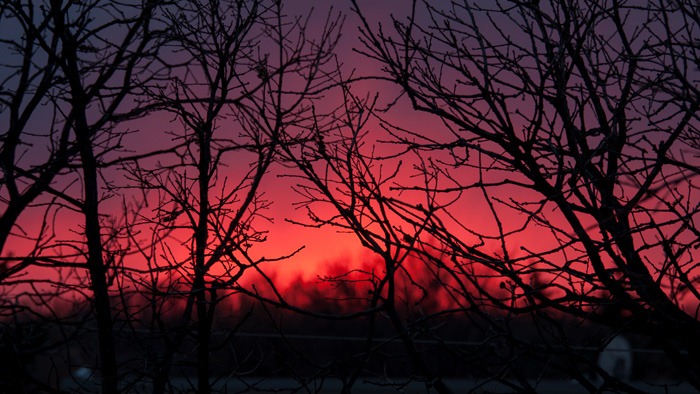 That’s how Mother Nature considers mankind: of no importance. To commemorate some of the nicer moments of the sunshine, namely the sunsets in the past few months, let’s have a look at

some sunsets. Ok, one sunset always looks like any other sunset. If you have seen one, you have seen ‘em all, right? Perhaps, but let’s see anyway.

To enhance the sunsets in this post I cropped them all to a familiar format of 16:9. That will allow for a wider view and hopefully less clutter.

The lead picture was taken from my balcony here in Winnipeg. The sun set in an explosion of red and blue hues. Focussing on the branches just in front of me, the sky was completely out of focus, leaving place only for colour. 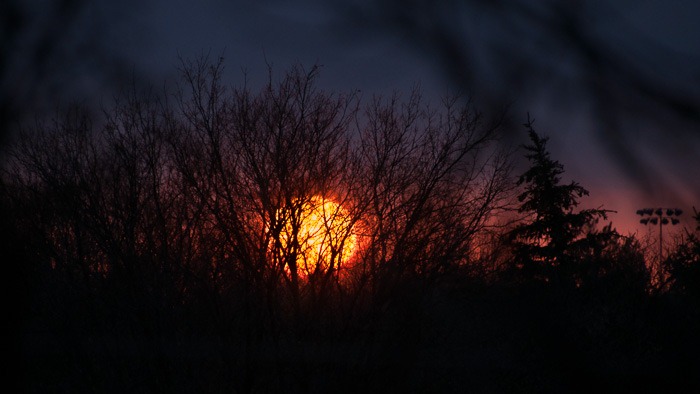 A few minutes before the lead picture, the sun was still on its way down. This picture has had no filters or other extras applied to it. This is nearly Straight Out Of Camera, believe it or not. 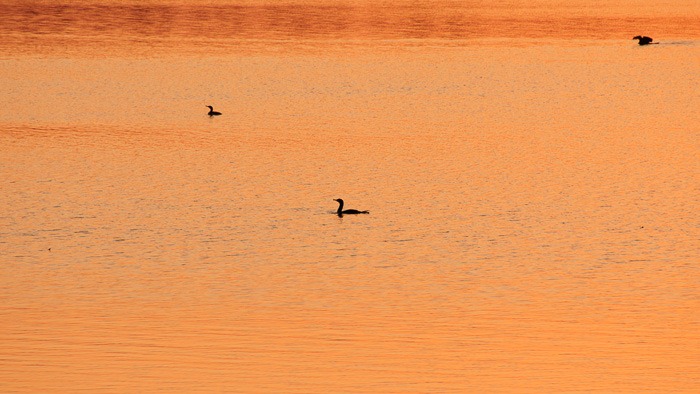 Sunsets are not always so dramatic, though. Sometimes you can even include other elements in the picture to get some interest, forgetting nearly about the sun altogether

. The above picture was taken on an outing to Fort Whyte Alive, during the Goose Evenings. Times where the Canada Geese gather by the thousands on a few lakes. Later they will be flying down south to warmer climes. 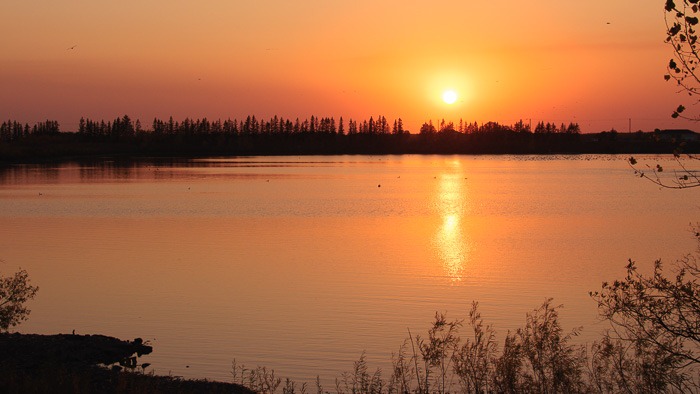 The same lake with the sun, but without the geese. Nice and quiet. At least if you’re listening to the photo and not to the droves of photographers gathered there to shoot the geese. The geese were still 40 minutes away here. 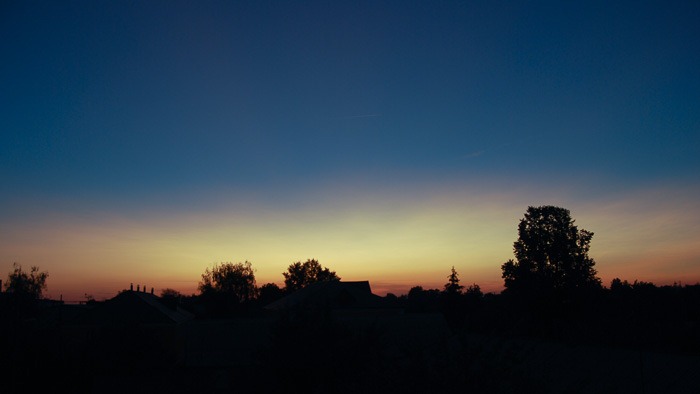 Other times, other atmospheres. This is an older picture I took in Ukraine, a few years back. Again a view from a balcony. Looking out over the western part of the city, you can distinguish a few houses. The colour scheme was so great that this picture hardly does it justice. 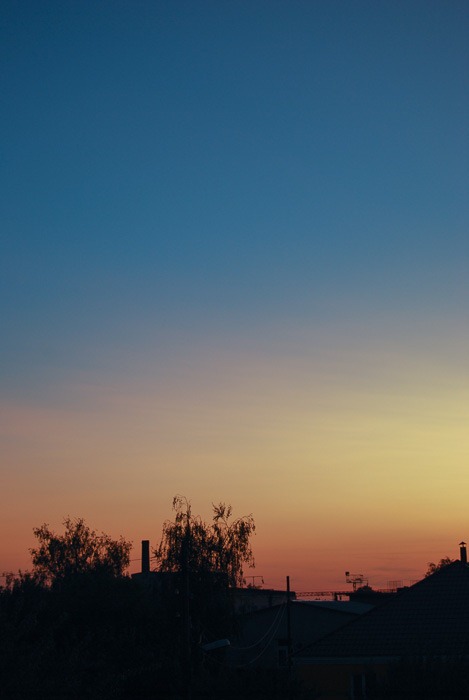 To enhance the colours in the picture, the vertical version shows more of the “after sunset” colours. Many people that go to watch a sunset, get up and walk away the moment the sun has disappeared below the horizon. That is just the moment that things start to become interesting. 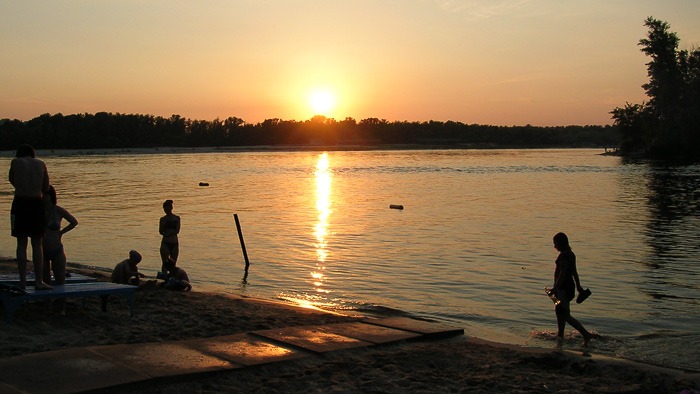 A sunset over the Dnieper river in Kiev, Ukraine. Just before sunset, the sky is nice but also not too colourful. Inclusion of some bathers makes the picture come alive a bit. 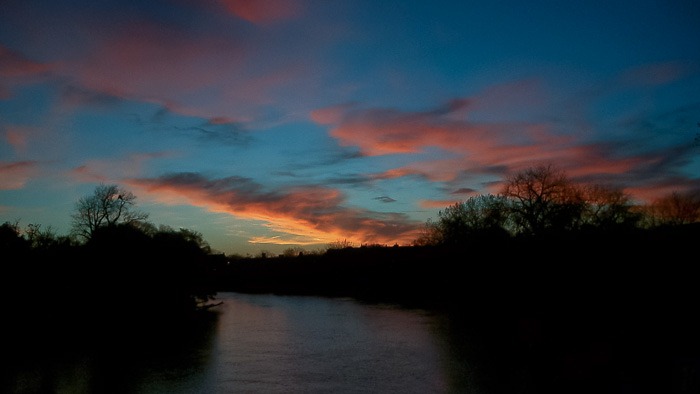 Taking that “knowledge” of the “colours after sundown” with me to Winnipeg, gave me this picture. While everybody was already ready and waiting in the car, I was still there trying to get the colours from the sky. Adding the Assiniboine river as the front element gave me some reflection instead of a boring black field in the bottom of the picture.

None of the pictures here have had “colour enhancements” and hardly any exposure enhancements, be they more or less exposure.

This is only a small collection of my sunsets. A collection that is now nice to look at thanks to the constantly clouded skies we have had over the last month. Also something to look forward to, once the clouds will disappear again during the winter.

So, if you are really in need of some colour and sunshine, come back to this blog and have some more