Summer has its undisputable winning creatures. When I was in the tropics a few years ago, I was happy to have a single silhouette of a hummingbird in one of my pictures. 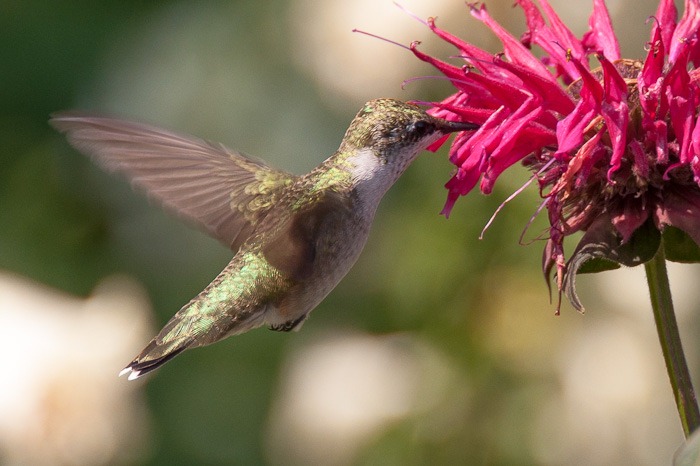 Never would I have thought to get so close to them, way out of the tropics as well. Hummingbirds are fairly rare in Europe, but not here. Here, they are the kings or queens of summer.

People that do not know better think that Winnipeg is one of the longest and best frozen cities in the world, with about 10 days of summer. Good for them, so it remains way calmer here during summer time

. The animals must know it too. Winnipeg is full of animals in summer, be it deer crossing the roads, rabbits or all kinds of birds and insects. 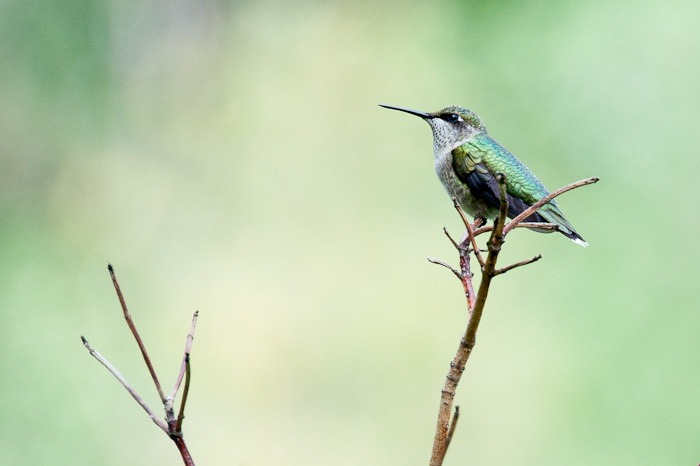 The hummingbird being the most surprising one for me. Winnipeg is on the same latitude as Brussels, Belgium. No way you find any hummingbird in Brussels! But then again, this is Winnipeg, Manitoba.

Europe has been cleaned from animals for centuries, man only has had the chance for that for about 300 years here. Enough to do damage, but not as severe as in Europe. But let’s stay positive and talk about those small critters that inhabit Winnipeg and surrounding area in summer. 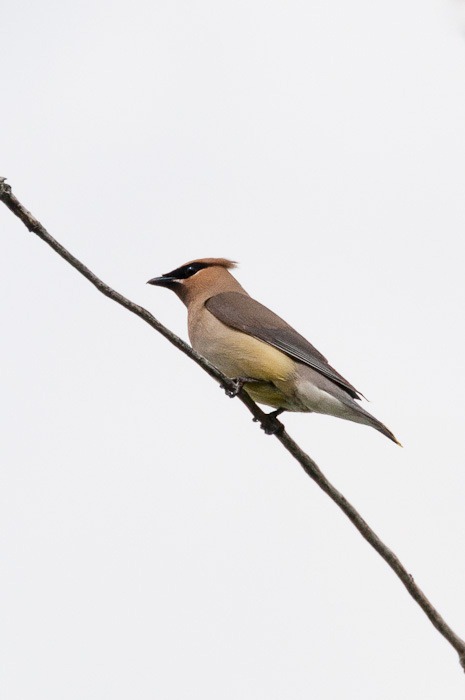 Let’s start with a bandit among birds, the Cedar Waxwing. It only lives here during summer, and makes its way south during winter. The mask over the eyes sometimes gives it the nickname “bandit” although the birds wouldn’t care about that, I think. Cedar Waxwings nest in summer and the juveniles can be seen late into fall. 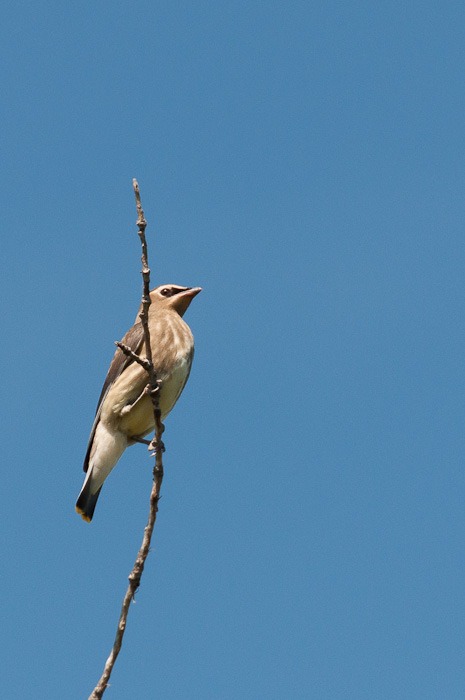 Just to see the difference, the above photo is a juvenile Cedar Waxwing. Already on its way to become a masked bird, but still far away from its adult plumage. 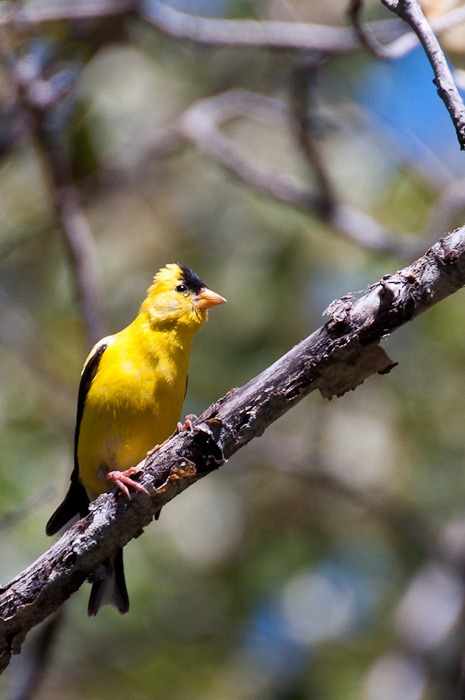 The most visible birds are the Gold Finches. Above the male, they are bright yellow and black (bright for the yellow, not bright black…). As soon as the temperatures fall, this bird is gone and will make place for others.

But of course it’s not only about birds in  and around Winnipeg. There are also lots of noteworthy insects. I am NOT talking about the mosquitoes here, they are beyond my limit of tolerance for photography. The only way to take a picture of them is when they fill themselves up with my blood. I won’t allow that. 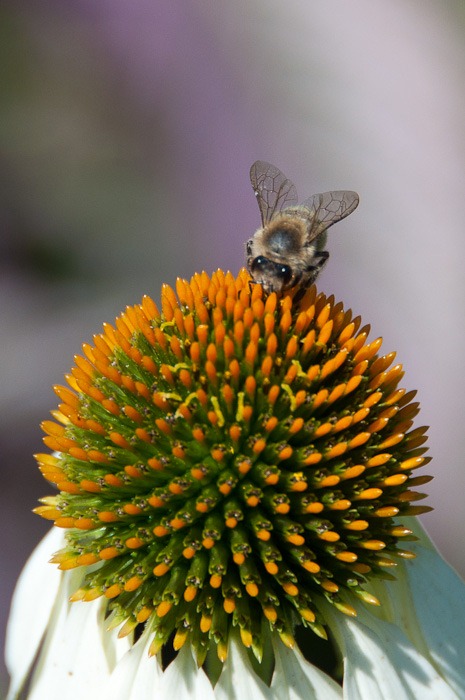 Other insects are very useful though. Bees with their well known functions for providing honey and other products. I cannot name the flower it is on, but one thing I can say… That flower is as hard as plastic, even if it looks soft and fluffy. 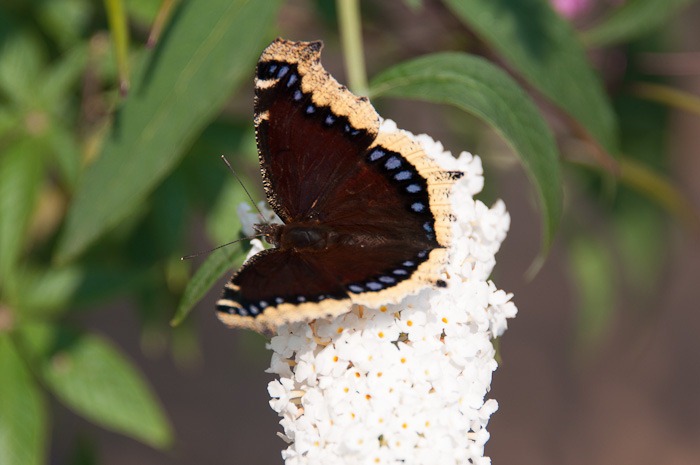 The Mourning Cloak, a well known visitor on my blog. I arrives in early spring and only disappears later summer and fall. This is a particular beautiful specimen, it has fringed wings. Not from flying too much around, it was born that way. 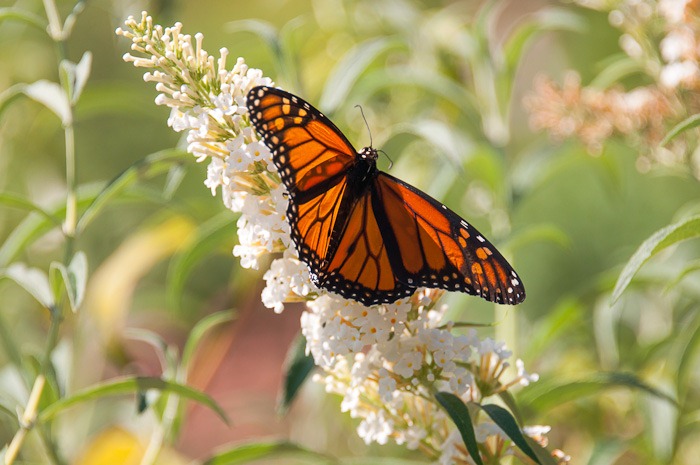 Then there is the king of the butterflies named Monarch. A butterfly of about 8cm wingspan. Definitely intimidating when it flies straight toward your face. Some would say “Duck!” 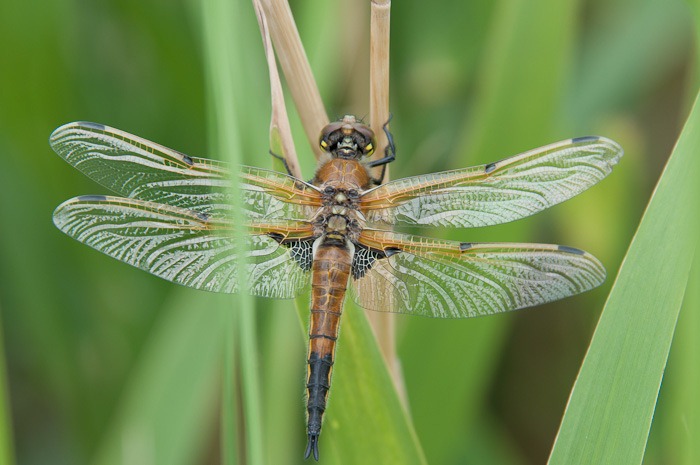 And let’s not forget our best friends in the combat against mosquitoes, the dragonfly. This four spotted skimmer does a fantastic job of cleaning the planet around me of mosquitoes. Its unique food consists of mosquitoes. Way to go my Dragon Friend!

But, I have to say that this summer again, the mosquitoes have kept a low profile. Lucky for me, not so good for the flying dragons.

These are some small creatures of Summer in Manitoba. Of course there are thousands more, but I only know so many of them and not all of them live around Winnipeg…